President's Cake!: Or, a cooking lesson with A Book of Cookrye

So my niece asked me a favor. She wants to learn how to bake. Well, as anyone who's read this can verify, I can not only bake things that turn out as intended, but also find new and exciting ways to fail!
I asked what she wanted to make. The answer: Chocolate cake! Great choice, don't you think? While there are tons of complicated cake recipes out there, it is very easy to find one where the instructions are "Put things in a bowl, stir, and bake." Plus, she picked chocolate! This'll be great, right?
.........Well, being one of the most generous people I know, she wanted to give this cake away to a teacher of hers. Ya gotta admit, it's pretty inadvertently daring of someone who's never cooked before to give her first attempt to someone else. You'd think she might want to bake a few times, get sure of herself, then start sharing with others. Or maybe that's just me. But that brings us to what made chocolate cake a terrible first choice: Her teacher is gluten-free.
There are are a lot of gluten-free desserts one can make easily. You know, anything that doesn't normally have flour. Things like meringues, custards, ice cream, cheesecake (depending on what you use in the crust). Those doing without gluten have a lot of easy-to-make desserts to choose from. However, cake isn't among them. By the time you've managed to do all the arcane substitutions that you need to make a flour-free cake act like it has flour, your recipe has gotten really complicated. Which brings us to today's perpetration.

I love how even though nothing about their clothes or the kitchen dates the production, somehow this entire show just screams that it comes from the nineties. Also, apparently while the chef has mastered making decadent chocolate masterpieces so fast it looks like he just throws things at bowls until a cake happens, apparently his English is not good enough that he can narrate his own recipe. Not that I mind. He can talk chocolate to me in broken English with a French accent all day.

You may be wondering how the heck I found this recipe. And... well, I found it a long time ago. Way back when I was really tiny and we had our first dial-up internet, I discovered that there were recipes online. And so, fascinated, I saved every single one I found (we had dial-up, so it wasn't as many as you may think). And the idea of a flourless cake mystified me even then. I'd tried making a cake without flour not too long before (we'd run out) and it came out exactly as you think.
The point is, I've been saving this recipe for an embarrassingly long time and this is as good an excuse as any to finally make it. Well, I'm not going to make it. My niece is. With several of our friends also there, because everyone likes chocolate cake.
We start with a lot of dishes and a lot of separated eggs. 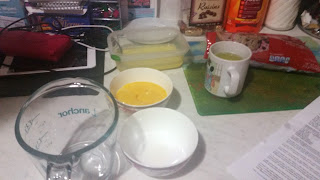 So it looks like we're basically making a chocolate meringue and putting it in cake pans? Maybe? I have to say, one of the fun things about showing others how to do this is their amazement at things you've gotten used to. First, I handed the mixer to my niece saying "And now, you get to use your first power tools!" Then she had to do this. 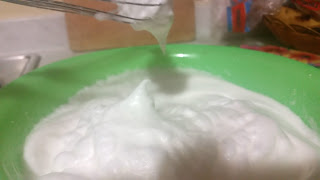 Her utter wonder at how egg whites turn into fluffy clouds was so sweet to behold. I got excited just seeing her get excited. Also, after having done this a few times, it's really awesome to see how amazed people get when it's new to them. Here I must credit her: for someone who's never cooked before, this is a pretty complicated recipe. First, one must separate over a dozen eggs, then beat egg whites to peaks, then fold them into a batter without deflating anything. Furthermore, on account of a faulty oven, we're baking in two toaster ovens (one per cake layer). In theory, if one can bake in adverse conditions one can bake anywhere. But despite these difficulties, she did an amazing job. My first attempt at this was an utter failure, check out my niece folding in undeflated egg whites perfectly on her first shot. 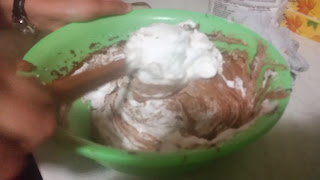 Incidentally, if you are prone to getting batter flung everywhere whenever you use a mixer, consider putting your bowl in the sink.

We all (there were many of us gathered together because chocolate) decided that rather than give away a two layer cake, we would eat one of them ourselves and give the second one away. I mean really, when you had chocolate cake batter that looked this divine, would you give all of it away? 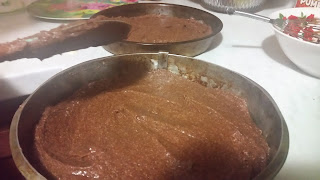 Meanwhile, going back to the aforementioned adverse conditions, it has been noted that we were using toaster ovens. It turns out only one of them could fit a 9" round pan. And so, in addition to learning a new cake recipe, we learned about smashing foil over a bowl to create a cake pan. Also, doesn't the batter look fantastic? I can't believe you're not supposed to eat it as it is. 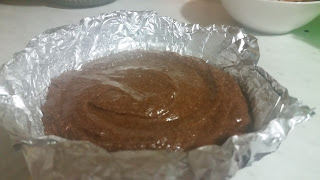 And so, we removed the cakes from the oven! Remember everyone, make sure your oven is level or else this will happen. It appeared that today we will to learn how to fix crooked cakes with lots of icing. Incidentally, the doesn't the crispy top make this look like brownies? 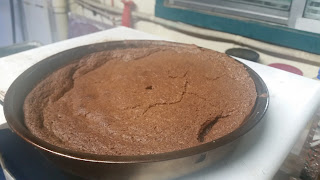 Here's where all that business of putting parchment paper circles in before pouring in the batter pays off: If the cake tries to stick to the bottom of the pan, all it can do is glue itself to the paper which was going to fall out anyway. 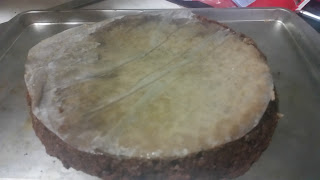 Now, if you go up and watch the video, you'll notice that he skips the part where you get the cake out of the pans. This may be why. 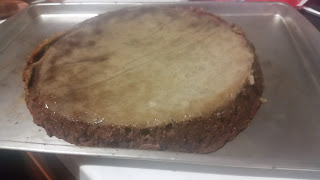 See that weird gelatinous stuff? As far as I can tell, the egg whites sank to the bottom and deflated there, taking some of the sugar with them. We all tried some of them, and the lightly sweetened hard-bake egg whites tasted like a grim diet dessert. If you've ever dieted, you know the type. They are technically sweet, but taste more like disappointment than anything else. Fortunately, it easily scraped off, leaving... this marvelous tempting creation.
This may actually be the recipe's fault. If you compare the video to the written instructions, he dumps both cocoa powder and melted chocolate into the cake batter. The written recipe makes no mention of any cocoa powder. Maybe it would have absorbed the egg whites before they could sink to the bottom of the pan and make that weird gelatinous thing on top.

All right, so it looks like we're about to serve a cow patty, but that's because we haven't hidden the cake yet with... the mousse! Which apparently starts with a chocolate oil slick over a sea of butter. 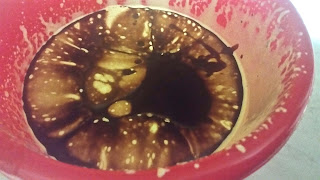 But following up on previous lessons, we got to once again practice the business of beating in egg whites! 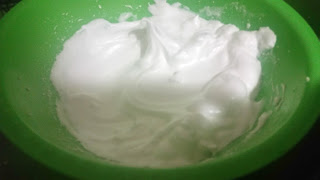 At this point I have to say she was more excited about making the mousse than she'd been about the cake itself. I wanted to show her mixing it, but all I could get was an excited motion blur. For someone who had very nervously nearly dropped the stirring spoon when we started, she was having a lot of fun now that we'd been baking a while. Check out how fast she's stirring! 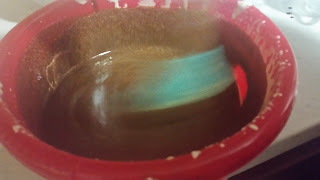 And so, we begin to crown the cake with the mousse. Which... well, just look at it! This is so thick it hold up its own shape! Incidentally, even if making fancy flourless cakes does not interest you, this mousse was seriously delicious. You could serve it as it is and everyone would love it. 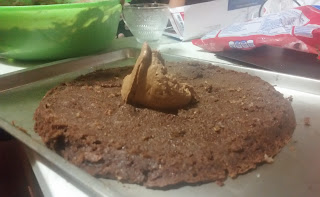 All right, let's see how well the icing hides how ugly this poor cake turned out. 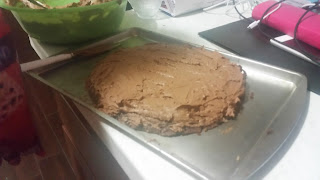 Well, that's no help at all. It still looks like a pathetic thin brown patty. Here we must note that in the original, you stack three layers of this cake instead of just a single one. So that would fix the height issue and make it look less... thin and puny. Howerver, what my niece lacks in baking experience (though don't you think she's done fabulously for having such a complicated recipe for her first?), she makes up for in crafts. 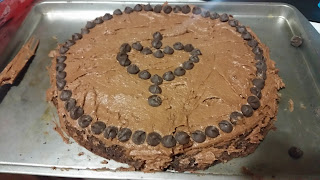 What was now a thin brown patty is now a spacious canvas for an adorable design! But how does it taste?
As aforementioned, we decided to reserve one cake layer for the teacher she meant to give her first baked creation to, and eat the other one for ourselves. Which meant we had a whole (though decidedly less pretty) cake to ourselves.
Now, if you go up to that video and skip to the end, you may notice that for all the elaborate decorating and such, you never see them cut a slice of the cake to show you just how tempting it looks inside. I'd wondered about that until we tried to cut the one we'd made.
You don't cut this cake, you scoop it off the platter like a cobbler. Even if we had done the extravagant chocolate decorations like he did in the video.

Now, this cake is rich. It's also not really a cake. Even though we had baked it, it barely held together. It tasted insanely rich and gloriously chocolatey (you may notice the cake is nearly black from all the chocolate in it), but as was noted as were we eating it, "This is chocolate mush!" If you absolutely love chocolate you will likely be ecstatic with this, but most people would be a bit underwhelmed.
You may think we underbaked it, but we not only left it in the oven for well over the given baking time, but we also used bigger pans, meaning the cake was thinner and therefore should have baked faster. It passed all known doneness tests- the toothpick came out clean, it sprang back when pressed, the cake pulled away from the sides of the pan.
What I'm saying here is that the cake itself is not the best part of the recipe-- though if you put the batter in a baked pie crust and froze it, you'd probably have an absolutely divine chocolate pie.
However, the mousse is absolutely delicious. Like, you could throw away the cake recipe and just serve the mousse in cute little cups. Which is great because the mousse recipe makes twice as much as we ended up using. We thoroughly iced 2 cakes and still had a big bowl of chocolate mousse left.
Posted by S. S. at 9:28 PM