Today's story starts with helping a friend move. If your vehicle has a noteworthy amount of space in the back, people will inevitably ask you to help them as their possessions migrate to a new home, preferably one where the management hasn't ignored the growing roach infestation. This time, we at A Book of Cookrye ended up spending a lot of time moving someone who repairs electronics. Besides the gasoline and food, we got.... this!

Not sure what you're looking at? This likely makes it clearer.

When you are offered a vintage stereo for free, it's perfectly fine that some repairwork may be required. Especially if you've been semi-secretly wanting to have a crack at electronics repairs for yourself. At any rate, said friend later noted "You know, we haven't broken in the oven yet..."
I asked "Well, what do you want to put in it?"
Which brings us to.... banana bread!


This brings us to a rare experience here on A Book of Cookrye- baking in the houses of people who practically never cook!
While we often like to cook with friends, said friends tend to at least occasionally make themselves a pot of spaghetti. Their kitchens generally contain the more basic cooking things. But hey, we all have different lifestyles- I get surprised when someone doesn't cook, other people look at me funny when they find out I never learned to parallel park. (This is not a joke. The last few times I had to parallel park, I have made a few attempts to back into the space before asking some random nearby person on the sidewalk to park the vehicle for me.)
Anyway, the reason we point this out is that we were once again working in a kitchen with very few kitchen things in the cabinets (or more realistically, in the piles of boxes. Again, he only just moved in). 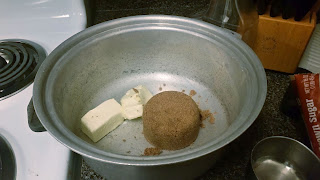 We at A Book of Cookrye, of course, are no strangers to making things happen in under-supplied kitchens. However, oddly enough, we have never actually made banana bread without an electric mixer to pulverize the bananas with. I realize that quite a lot of people will have at the bananas with a fork until mashed, but (to my own surprise when I thought about it) this was the first time I ever did so myself. 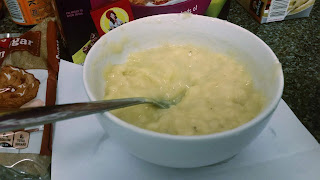 A note to people who like multipurpose devices: stewpots do indeed make excellent mixing bowls. However, at first the ingredients will run away from each other instead of mixing together. 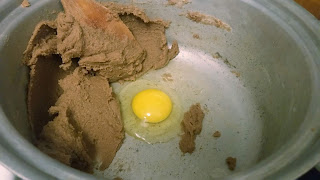 However, all you need to do is think of what Our Heroine of Cookrye, Fanny Cradock, would say: think of someone you've never really liked but you're too well-bred to say anything, so instead you take it out on the innocent bowl of things! 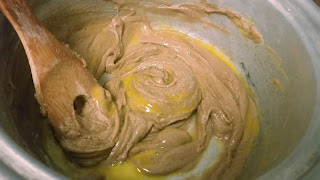 As things simply skid to the side of the pot instead of actually mixing together, simply bash them about harder and they will eventually turn into... this! The bananas may look like someone was unfortunately sick in the bowl, but that seems to happen a lot with banana recipes. Besides, those are hand-mashed bananas- which hopefully adds prestige. 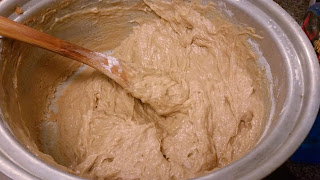 Looks good enough to eat, doesn't it? We were excited. And indeed, it is time to introduce these to the oven!
But wait-- we've never used this oven. Remember when we irreparably burnt a batch of cinnamon rolls when attempting to inaugurate Marcus' oven? My friend, despite having not so much as a mixing bowl, actually had an oven thermometer! Furthermore, he had what may be the most expensive oven thermometer I've ever seen! 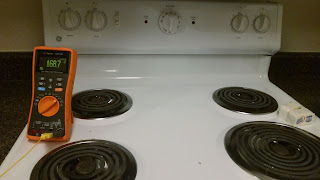 I should have stepped back a bit so you could really see what's going on here. Here's an artist's impression:

It is very difficult, when baking, to operate a multimeter without getting batter on it. Incidentally, the oven was correctly calibrated, but varies way too much.
Of course, if you think about it, if you set your oven to 350° (that's 180°ish for you Celsius folks), it will get a few degrees hotter every time the heat turns on, and that it will dip a bit below that before it cycles back on to heat up again. But it's not supposed to go 20 degrees off in each direction. Hoping that all would average out during the long baking time, we inserted the loaf into the oven. It... sort of worked. I mean, we did end up with a loaf of banana bread and not a cinder. 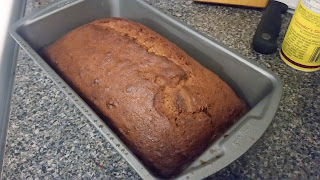 However, sharp-eyed bakers will notice that the top of this loaf is not slightly curved but looks like an upturned C. The oven got so hot every time the heating element cycled on that the sides of it baked hard before it had time to rise, while the batter in the center baked a lot more nicely (see? I have learned things in my baking class!). But at least it wasn't burnt and dead at the edges. 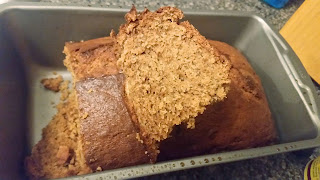 Indeed, aside from being a teensy bit dense at the edges, this banana bread was everything you'd expect it to be!
And so, as a (honestly rather extravagant) present for helping a friend move, we got to take home... this!

Incidentally, ever wonder what lights these things up? Or thought it was something like panel of tiny LEDs or the like? It turns out... it's just extremely industrial-looking incandescent Christmas lights.
-

As a final food-related note, it turns out this stuff does not go stale. My friend left it out the counter for a week for sporadic snacking, and it was only barely a little worse than fresh. Even the cut surface hadn't gone hard on the outside. 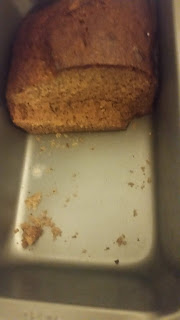 And that is the closest we've gotten to A Book of Cookrye Miracle in a long time!
Posted by S. S. at 2:53 AM