Today's recipe starts with fat-free food, so you know it's good for you!

Yes indeed, today we are making.... this! 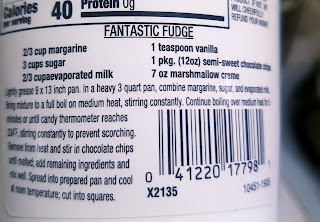 Many of you likely recognize this. Fantasy fudge (or its store-brand knockoff "fantastic fudge") is still printed on the back of marshmallow creme jars several decades as it first appeared. I'm surprised to note that the recipe looks identical to the actual name-brand one despite the hasty title change. Either they licensed the recipe, or they used the ever-popular "let's just hope they don't sue us" legal defense. At any rate, this recipe starts with enough sugar to supply a diabetes clinic with a week's worth of new patients. 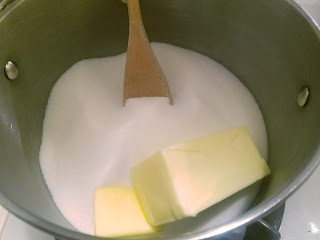 Don't you love how the jar proudly proclaims that the marshmallow creme is fat-free, and the first thing we add is a big hunk of butter? We then proceed to fortify this with calcium.

Incidentally, if you're using a can of evaporated milk that's been sitting in the back of the food closet for so long you forgot when you bought it, be sure to give it a good hard shake before opening it. Otherwise, you may find a quarter inch of surprisingly hard sediment on the bottom of the can after you dump it out.

And so, we commence to awkwardly push the butter around in the pan and wait for it to finally melt.
While we're waiting, this was one of my signature recipes in high school. I first learned how to test candy in cold water when making fantasy fudge. When I was in high school, one of my signature desserts was a 4-layered mint-chocolate version. You'd cut the recipe in half, and make it with white chocolate chips, mint extract, and a little green coloring. You'd then melt the other half of the white chocolate chips and spread them on top to hold the layers together. Then you'd do another half-recipe with actual chocolate and pour it on top. After melting the other half of the semisweet chocolate to spread on top, you were finally one. I attempted once to do one big boiled mixture and divide it in half instead of standing over a hot stove and cooking two batches one at at a time. What was left in the pot turned into a sad grainy mess while I was finishing the minty white chocolate layer. 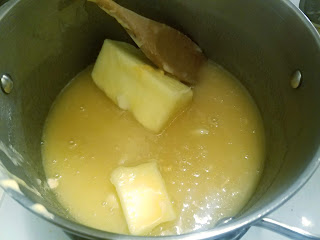 Actually, our history with this recipe goes back further than this. Our Mom of Cookrye fondly remembers a lot of her grandmother's cooking. She used to rhapsodize about this fudge that involved marshmallow creme, saying no one ever got the recipe and she's never had anything as good since. Then, one day when we were getting the ingredients for a batch of Rice Krispy treats, she happened to look at the back of the jar and was like "This is it!!!" 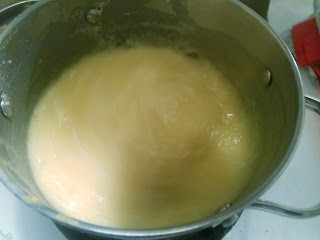 At this point, we have what seems like a cross between condensed milk and lava. But when we tested it in ice water, we found that it was indeed cooked to the proper soft-ball stage. The test sample we dripped into the water came out shaped like someone's pair of kidneys. 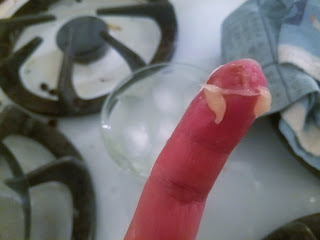 We actually tend to let it get just a tiny smidge harder than the recipe says. We've had way too many batches of fudge stay runny, and you can only claim you were making chocolate sauce so many times before people realize you fudged the fudge. Letting the pot of boiling stuff get just a few degrees harder than advised is a nice way to make sure the fudge actually hardens. And so, we were ready to finish this delightful creation with a bag of chocolate chips that promptly sank into the molten mire. 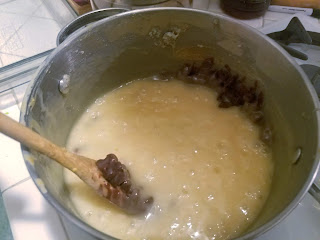 It was just a little bit grainy and gritty, but we had in fact achieved chocolate lava. We were not worried about the graniness- the marshmallow creme seems to dispel the grit and turn it into creamy fudge. All that remained was that white glop that is so far removed from dairy that the manufacturers legally must misspell the word "cream." 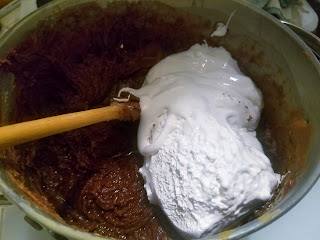 The one tricky thing about this recipe is that once you take it off the stove, you have very little time to actually get everything else in there before it's too cooled-off to mix. We've tried reheating it, but it always seems to come out grainy when we do. Also, the chocolate will resist mixing with the marshmallow creme. You have to really beat the bejesus out of it.We thought we'd use a rubber spatula so we could scrape any umixed deposits of melted chocolate while we mixed, but the stuff in the pot was too stiff and hard. You can also see the chocolate and the marshmallow refusing to mix before we got out the wooden spoon and did as Fanny Cradock would do: think of someone we utterly despise but are too well-bred to say so, so we take our anger and beat the soft-ball-stage snot out of the mix-resistant fudge. 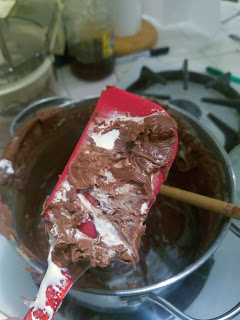 In very short order, we turned the hot mess into fudge.

The recipe says to use a 9"x13" pan, but that tends to make thin fudge. We wanted to be able to cut it into adorable cubes, so we used a smaller pan. Unlike cakes, no one needs to worry about whether it will come out all right if you change the pan size. It just takes longer to cool off. 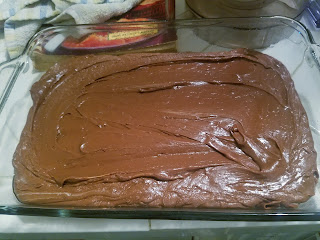 Let's get a closer look at this chocolate delight! 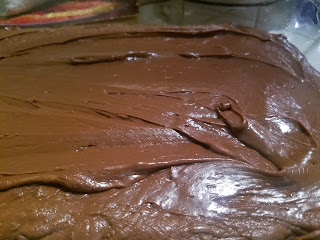 I do find it strange that while it gets too cool to mix anything in there almost immediately, it takes forever to cool off enough to cut. But we did ultimately have this huge pan of fudge. 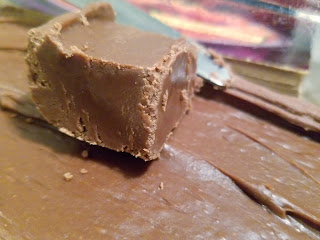 Of course it's delicious. Otherwise I wouldn't have made this as many times as I have. We will note that this fudge has a much longer shelf life than any other recipe we've made. A lot of them become dried-out and hard after a day or two, this was still fresh a week later. We didn't go out of our way to tightly seal it either- we only put the pieces in a sandwich bag.
With that said, this is sweet. It's like sliceable chocolate icing. It occurred to us afterward: between all the sugar and the marshmallow, did we really need to use semisweet chocolate that has even more sugar in it? Purely as an experiment, we'd love to try this with baking chocolate instead sometime.
Posted by S. S. at 11:46 PM