A lot of bananas have passed through the kitchen recently, and they all went brown at the same time. And so, for the second time in a short time, we are making this banana cake recipe that lets us turn five nearly-rotten bananas into cake. Most banana bread recipes only use two or three, but we had a lot more bananas than that which we urgently needed to use. Well, technically we could freeze them for another day, but why do that when you can have dessert?


You may be wondering: what is so different about this recipe this time? What makes it so unlike the last time you made it that you're posting it again? The recipe-altering difference lies in the measuring cup shown below. 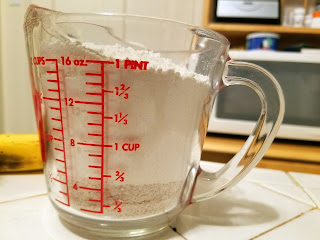 Yes indeed, we're adding whole-wheat flour! The brown flour, especially when combined with the bananas (which as we all know are a great source of potassium), allows us to pretend this is good for you. Since this cake will have five bananas in it, it's practically a fruit salad with whole grains thrown in for extra dieters' points.
In all seriousness, we thought that the cake needed a little extra flavor kick. The brown sugar nuggets and banana slices interspersed throughout were great, but the actual cake was a little... well... flat. The banana flavor came though wonderfully, and it was in that perfect spot between dense and airy, but the only flavor in the cake itself was sweetened bananas. Yes, we can add spices and the like, but this seemed like it needed some earthy undertones in it. So we added just enough brown flour to change the taste. After all, we've been doing whole-wheat swaps with brownies for a while (often replacing all of the flour and not just part of it). No one has complained, though a few people have said that they have a little extra I-don't-know-what to them. The flavor of whole-wheat just seems to go well with a lot of things put into desserts. If you think I'm batty in saying so, consider that whole wheat flour is the main ingredient in graham crackers, and those grace the underside of many a pie and cheesecake.
In making this recipe, we learned that Mrs. Ruth Kahn was not kidding when she said to use a square pan. The cake batter barely fit in this round pan before it had been in the oven long enough to rise.

We hastily rummaged through the cabinets trying to find something bigger than this but smaller than the massive sheet pan. This odd-size rectangle was the best we came up with. I don't have a ruler at hand, but the long side of the pan is about the same as the short side of a sheet of copy paper. The batter came up a little bit higher than we'd have liked, but hopefully it still had enough room to rise without spilling over and burning on the bottom of the oven. 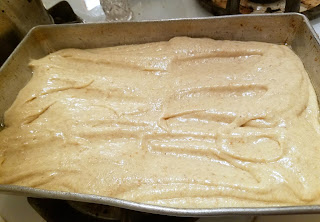 As you can see, this pan barely held the cake. Had I done a good job of scraping the bowl into the pan, we would have had some serious overflow in the oven and a very smoky kitchen. It is well known that I usually don't get out the rubber spatula until after the baked creation is in the oven. While I always love to eat cake batter, rarely has licking the spoon saved me from cleaning the oven. 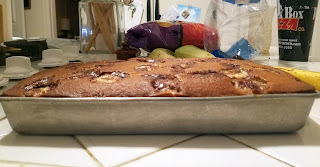 In case you think I'm being dramatic, let's get a good closeup of the edges of this pan. As you can see, if it had contained any more cake batter it would certainly have dripped over and smoked up the oven. This kitchen is unfortunately open to the rest of the house, so the resulting smoke would have spilled over into the living room, and from there up the stairs, and become part of the house's atmosphere for at least a week. 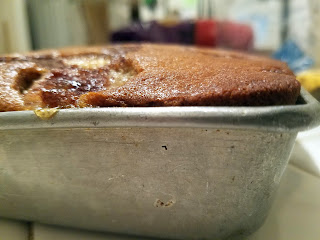 I'm still not sure I like the look of sliced bananas on this cake. After baking, they look weird and dried-out. They taste really good after baking in cake batter and turn marvelously creamy, but they look... er... bad. We may cut them into semicircles next time so they look less... like this. 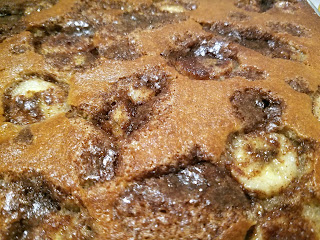 With that said, this cake is amazing. The whole-wheat flour added just enough extra flavor to give it what it was missing. We will note that when others entered the kitchen and saw a dripping mixing bowl on the counter and Mrs. Kahn's recipe taped on the cabinet above, excitement filled the kitchen. "You're making that one again??" That's how good this cake is. 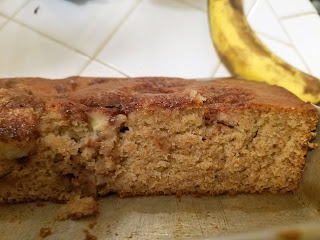