Banana Spice Cake: or, There is more than one banana bread

Like many people these days, we at A Book of Cookrye have been making a lot of banana bread. There's been a lot of theorizing about why banana bread has suddenly graced the ovens of many people who previously never baked (PS if this includes you: I hope you like the batter as much as I do), but around here it's because we keep buying a lot of bananas all at once and forgetting that they expire all at once. Seeking to expand our banana bread repertoire, we consulted our new favorite beat-up cookbook to make...

This recipe's been staring at us for a while since it's on the same page as the banana bread recipe we've made several times. Like the division between cupcakes and muffins, the line between banana bread and banana cake is either blurred or nonexistent. Anyone flipping through recipes can see that often the same recipe is called both in different books. But it seems that banana cakes tend to be in older books, and that we all started trying to collectively pretend they were good for you and calling it bread rather than cake in an attempt to make it seem as healthy as blueberry muffins.

Most people (including Josephine Ferencik of Joliet, Illinois) just mash the bananas, but there is only one way we at A Book of Cookrye pulverize bananas nowadays:
Obviously, anyone making this cake could just add a really generous shake of pumpkin spice instead of measuring out each and every one. But if you've been baking a while, you have probably got a lot of spices that you bought for that one recipe a few years ago and never used again. They populate the dark corners of your cabinets like old grocery bags. Sometimes it seems like you don't buy spices, you adopt them and give them a loving lifelong home in a cool dry place. 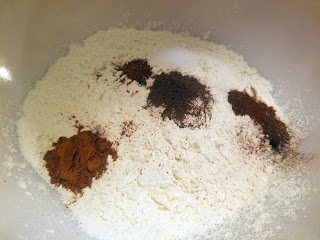 As aforementioned, this recipe's been staring at us every time we make the normal banana bread printed immediately above it. But the instructions are on the next page. We got all the listed ingredients out and only then did we see that the directions are, to put it mildly, a little odd.

If we end up with a lot of butter lumps interspersed through flour paste, we're blaming Josephine Ferencik of Joliet, Illinois. The mixer wasn't actually mixing anything, it was fighting with the mess in the bowl.


We set a timer for two minutes as Josephine Ferencik of Joliet, Illinois told us to (this will be important later). The mixer did manage to turn this into banana spice spackle, though the motor was begging for relief from this ordeal the whole time. 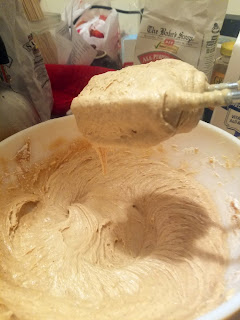 At this point we noticed a tiny problem with this recipe, and we don't mean the arbitrary splash of vanilla that got named in the paragraph but wasn't mentioned in the ingredient list. This recipe calls for molasses, but never mentions doing anything with it. We were a bit unsure of whether to add it with the milk at the very end since they're both liquid, or whether to add it while we already had the mixer turned off and propped up. Or perhaps we should have mixed it at the beginning? We decided to add it now because that way we'd really know it was thoroughly mixed in. Also, the mixer deserved respite, and the molasses would in theory make this impending disaster a little bit runnier. 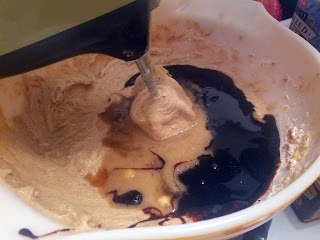 This is the ugliest cake-mixing I've done in a long time. There are no pretty swirls of chocolate going around the batter, no light and fluffy clouds of butter creamed with sugar. We instead have mixer-breaking cement with what looks like tar on top. 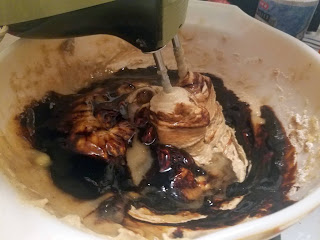 But finally, with the help of the molasses, this actually looked like cake batter. It was definitely heavier than it should have been (the mixing bowl had a lot more heft than the ingredients list would suggest) and was the perfect consistency for regrouting tile, but at least we could pour it rather than attempt to use a spatula like a putty knife. At this point only one ingredient remained, and it did not want to mix in. 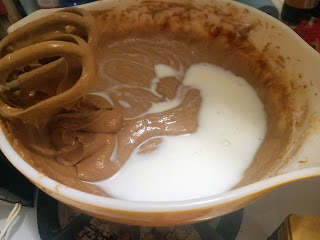 Eventually the mixer forced everything together, though at the end of this our batter was curdled. Seeing all those tiny little clumps suspended in the brown gave me horrible flashbacks to the last time I tried to bake a curdled batter and ended up with a pan of hot paste. 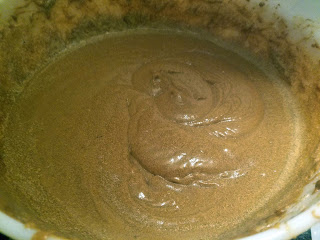 Now, remember how we said we set the timer for mixing this recipe? Well, the timer is on the oven, which (as we had heated it up before commencing) was piping hot when we inserted the pan. I hardly need mention that we turned the timer off after it beeped to announce that the time had elapsed.
After a while, I noticed that the kitchen smelled like hot cake batter, not like a baking cake. I didn't know there's a difference, did you? I kept looking in the oven and nothing in the pan changed like it ought to while baking. It's true that some recipes take longer than others to bake, but I've never heard of a cake that still looks like raw batter after almost half an hour. Then I noticed a problem... 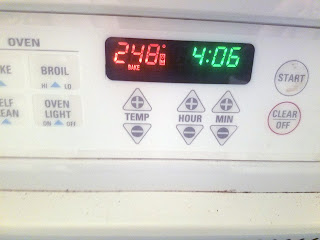 ..I had not turned off the timer but the whole oven. But the cake baked quite nicely after turning the heat back on. 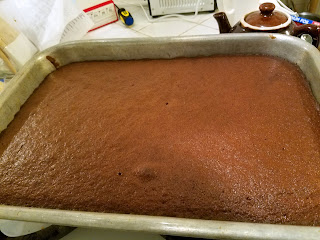 It's hard to photograph because it's so dark, but we basically have gingerbread. It rose into a surprisingly airy cake. 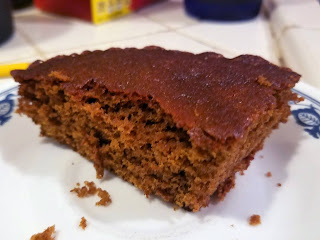 It tastes so molasses-y and spicy that you'd think it'd be a lot of denser. With that said, it came out a bit dry. But I think that's due to my inability to correctly operate an oven. Had it not been slowly warmed over for like half an hour before actually getting baked, I think it'd be perfect. But we had a big pan of cake and therefore could not waste it.

Like many people whose cakes never live up to the hopes that ferried them into the oven, we decided to try to fix our failures with icing. But since spreading icing requires effort, we chose the easier path of simply dumping glaze on instead. To give the glaze a better chance at making this cake a bit less desiccated, we thoroughly punctured the top before pouring on a lot of cinnamon icing. Said icing ended up looking oddly orange atop the cake. 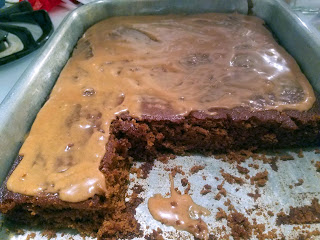 With that said, it un-dried the cake enough to make it lovely. It didn't soak all the way through the cake as I'd hoped, but the top of the cake was the driest part and the icing corrected that flawlessly. And the cinnamon complemented the cake beneath it so well that I'd put it on this cake the next time, even if I do correctly operate the oven and thus avoid drying it out. 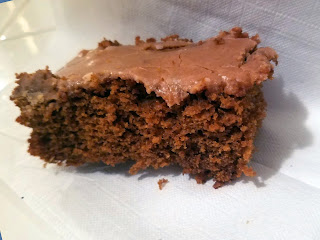 This is a really good, dark, spicy cake. It doesn't taste like bananas very much, though you can detect them underneath everything. And it comes out so light-textured and lovely. Also, since it's a banana cake, you can always bake it in a loaf pan and call it banana bread. We all know bread is better for you than cake, so you're already succeeding in avoiding dessert.
Anyway, this is really good, and making it is an excellent workout for your mixer. I'm already planning to make this one again.
Posted by S. S. at 11:43 AM