I've never mentioned this before, but we at A Book of Cookrye really like Diet Coke. We like Diet Coke so much that we had to stop buying it because we were spending an embarrassing amount of grocery money on it. Nowadays, we only get Diet Coke at our parents' house-- except when Mom is trying to stop drinking it. When we come home and find there is no Diet Anything in the refrigerator on these occasions, we're always quite devastated. (note to Mom: There's an excuse for you to buy more!)
In high school we wrote a poem in praise of Diet Coke which was tacked to our bedroom wall until we moved out. It may still be in some closet in our parents' house. The first line was

Why do we say this now? Because while stuck in a long wait a few days ago and therefore a lot more interested in random online listicles than we generally are, this popped up on a list of cooking tips that will purportedly change our lives.

Somehow, I get the impression that substitutions like the aforementioned are what drive people to more reliable vegan dessert ideas:

But getting back to the original one. This is from a long infographic of vegan substitutions which was punctuated with cartoony sad animals (you can see the ears of one of them at the bottom) and slogans straight out of PETA pamphlets. We would like to draw your attention to the first subpoint.

We would like to briefly digress to say that no, we are opposed to the notion of vegan cakes. As a peace offering to anyone who might think otherwise, we would like to offer you a slice of this spice cake which is divoon.

I read the Diet Coke subpoint aloud to multiple people who all responded like this:

The passionate reaction was a good enough excuse to try it out in my own kitchen! Now, do we have a cake recipe anywhere that calls for two eggs?

Well, that worked out eerily perfectly. However, we will admit that there's only so much veganism we're willing to put up with in one cake. By that we mean the bigger bowl does not contain margarine.

We at A Book of Cookrye would like to briefly pause to say that having made this recipe before, it is a pretty good cake when you're not dumping in Diet Coke for eggs.
That said, surprisingly few places sell Diet Coke by the individual can. The grocery store only had bottles by the cash register. The only vending machine we've seen that sells cans is at the county college 30 miles away. We say this because for the first time in A Book of Cookrye history, we had to get ingredients at a gas station.
Side note: Did you ever realize that (assuming you're also in the US) we live in a country where supermarkets have refrigerators at each cash register for the express purpose of selling you cold sodas? Not even perishable foods that actually might be somewhat good for you, but sodas which neither need refrigeration nor contain anything at all that is good for you? (and no, we're not launching into a sanctimonious anti-soda tirade- see the Diet Coke praise poem at the top of the page.) If that ain't living the first world, nothing is.

We at A Book of Cookrye honestly don't get why Diet Coke is supposed to work as an egg substitute. Most egg substitutions we've seen are some plant-based equivalent of gelatin which actually makes sense if you're looking at the chemistry aspect of cooking. Regardless of whether it worked, we felt a not-as-minor-as-it-should-have-been heartbreak over wasting a perfectly good can of Diet Coke which was still cold.
But, in the spirit of veganizing previously normal recipes, anyone who complains about Diet Coke eggs can have tofu instead. We at A Book of Cookrye are genuinely amazed at how many times in one recipe some people will pretend tofu is something else. Don't eat butter? Use tofu! Don't eat eggs? Use runny tofu! Cheese? Tofu. Mayo? Tofu!  Heck, there's probably someone out there saying if you're gluten free, you can substitute tofu for flour. At least Diet Coke represents some amount of creativity. It may be the same sort of creativity that leads a first grader to think that Oreos dipped in ketchup are the best thing ever, but it's creativity nonetheless.

Diet Coke makes even less sense as an egg substitution upon trying it than it did when reading it. Even if you're ignoring the function of eggs in a cake recipe and trying to swap one liquid for another, two eggs do not measure out to nearly the same volume as one can of Diet Coke. Even if Diet Coke eggs had made sense before trying it, we at A Book of Cookrye suspected that no cake batter is ever supposed to be curds suspended in gloop. 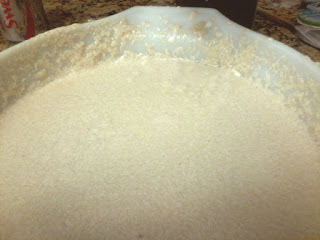 We had considered after buying the Diet Coke that we could have gotten a more suitable type of diet soda for this. Something like diet orange soda might have tasted better in cake. However, once the batter was ready, you could barely tell any Diet Coke was in it. So, onward and ovenward!

The top of the cake looked, well, almost normal when baked. And heck, it almost smelled like a real cake. For the record, it had to cook exactly twice as long as the recipe said it would, but the recipe writers had assumed we would be using eggs and not... er... egg substitute. 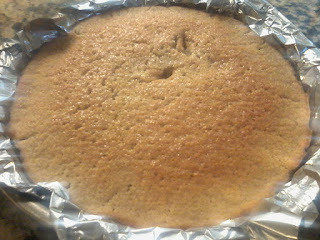 However, when we sliced it, we suspected that all was not right with this cake.

Yes, once again, we had made a pan of congealed cake paste. This cake was everything a cynical bastard waiting for the next disappointment in life would expect when told "And this is a vegan dessert!" It tasted wrong, looked wrong, and was the sort of thing you expect some stuck-up prat with a bag of pamphlets to give you while smugly saying "See? You can make cruelty-free desserts!" It felt like eating paste. The Diet Coke added an unnerving metallic taste that left you thinking some of the pan had dissolved into it during the baking. This is one of the very few things that have left us at A Book of Cookrye feeling like we might puke. And for the record, you should not be able to do this to a cake. 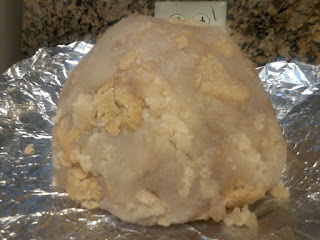 I've never felt like apologizing to a recipe before. But I felt like I'd wronged somebody in perpetrating this... thing, and therefore needed to beg forgiveness of someone. I'm so sorry, Mix Easy Two-Egg Cake. Here, I'll make you with actual eggs to make it all better.

Behold, the reward for not trying weird substitutes for the eggs: the cake batter is creamy, thick, curd-free, and divoon! 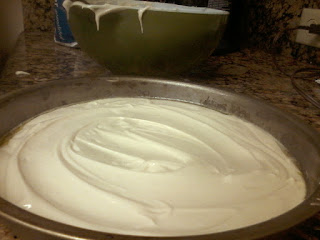 In conclusion, do not try to veganize recipes by way of vending machines. That way you can get a cake that looks like this.

And when you cut yourself a piece, it will be a divoon, light, delicate cake and not metal-flavored cake clay. You can also get away with using plain flour instead of cake flour because you didn't dump Diet Coke in there instead of eggs. (As a side note, you probably want to dust the pan with flour after greasing it for this one. It's a bit tricky to lift out of the pan otherwise.) 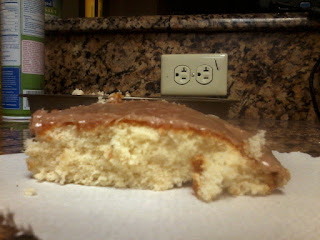 Once again, we at A Book of Cookrye have nothing against vegan cakes, just lousy cakes. If you want a good vegan cake recipe, we actually have one here!