Peaches and Cream Cobbler: or, This is what happens when you try those stupid shortcuts


We at A Book of Cookrye have been pondering upside-down cakes for a while, mainly because they're delicious. We have also been looking through those "life-hack" images which purport to make our lives easier. One of them suggested that you can use a can of condensed milk instead of brown sugar and butter in the pan, you'll have an upside-down cake without waiting for the butter to melt. Because, y'know, that takes forever. Granted, we at A Book of Cookrye have already done the same thing with caramel ice cream syrup, but what's the fun in doing things you already know will work?

At least if this fails, it can't taste bad because condensed milk is delicious and so is cake. 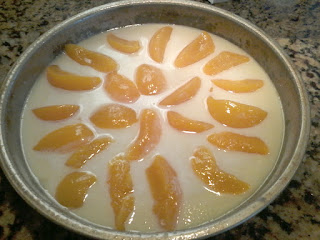 In the spirit of using up things that have been sitting around our room too long, we dumped the last of the sherry into this. This would be the same bottle of sherry that has been with us since we made booze brownies.

If this thing fails, at least it can't fail badly. There's not a thing in this pan that isn't delicious. We've got cake batter, peaches, and condensed milk (which is better than it should be- if you find anywhere that sells it, get ice cream with condensed milk swirled into it).

I've never seen a cake that apparently had such a good time in the oven before. 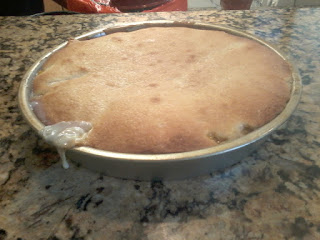 If you hadn't just seen Waiting again and therefore could eat it with a straight face, it was pretty good. However, there was no point in trying to serve it upside down. No one likes a cake that leaks all over the counter. That said, it was really good, especially if you spooned some of the... er... stuff on top of the cake. 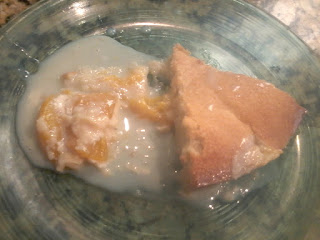