Italian Pork Chops in Boozy Cabbage: It's like Italian Bubbles and Squeak but with a pig instead

Guess what happened in the Book of Cookrye world!

Meat like this is outstandingly rare in our budget of "What is this thing called money?", so we wanted to do something better than just putting them on a griddle. Besides, rarely can we get look at recipes in the meat sections of our cookbooks and actually consider making them!
Most people in our place would pick out a  recipe that makes them salivate just reading it, but we at A Book of Cookrye went with one that left us with no idea what would end up in the pot. Yes indeed, we're cooking the pork chops in boozy cabbage.

We had no idea whether to use a red cabbage or a green cabbage, but we found a one-pounder stacked among the reds at the middle-Eastern store.

Does anyone else remember a Pinky and the Brain comic where they ended up in colonial Salem and Brain committed some grievous crime and had to wear... The Scarlet Lettuce? He spent the entire story saying it was in fact a cabbage while the good townspeople shouted "Silence, nonbeliever!" every time he said so? Anyway, the point is, a cabbage cut in half cries out for mathematical analysis, especially if you're into fractals. 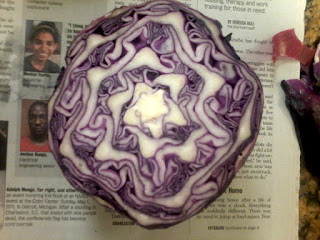 We at A Book of Cookrye aren't sure how you're supposed to shred a cabbage, so hopefully having at it with a knife will suffice. 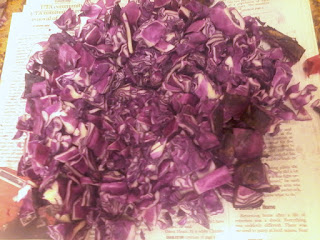 Actually, this recipe involved a lot of chopping things. 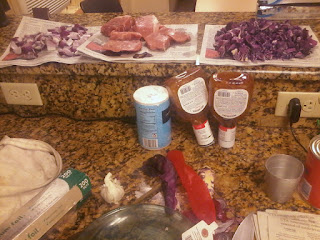 We made the executive decision that these pork chops were fricken huge (wheeee!), and therefore we should cut them in half so they'd all fit in the pan. Not that having such a surplus of meat slabs is problematic, of course.

Having cut them in half, they just barely fit into the skillet (this is an amazing day!). 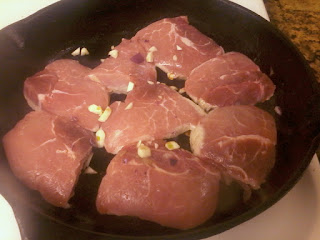 We had no idea if the recipe meant to brown them 6 minutes per side or six minutes total. When we checked them at three minutes or so, we went with the latter. 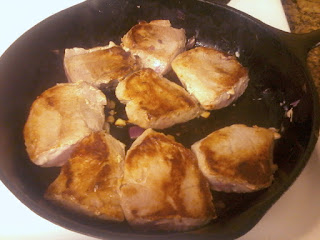 Incidentally, for once we read the recipe enough to plan this out and brought out an actual plate for removing the onions to when they were cooked.

All right, it's time to dump it all together and wait for supper! We had thought we would just do the whole thing in the skillet, but for once this did not fit. This caused no small amount of consternation in the Book of Cookrye kitchen; numerous culinary experiences had made us believe the skillet was magic and could expand its capacity as needed.

Well, the whole thing had to go into the pot and that barely held it all. 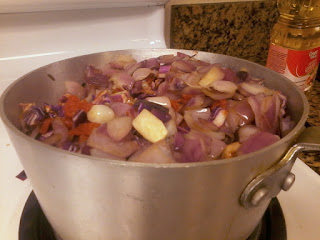 And now, a grocery-shopping aside: We at A Book of Cookrye got so nervous buying the wine- all of the bottles had pictures of fancy houses (you know, the sort owned by people who use the word "summer" as a verb), years on the labels because you're supposed to know what that means, weird European-sounding variety names, and little paragraphs on the back that talked about "hints," "notes," and crap like that. We went with the one that required neither a corkscrew nor worry that it would break (also, it was cheap).
Also, as a recipe note, we read that #2 cans hold about a pint, so hopefully 28 ounces is close enough to the right size of tomatoes.

All right, this is the moment that caused the most dread in the whole recipe:

One cup of wine doesn't seem so bad, but the pot was so densely packed that the wine went up to just below surface level. We panicked at the thought of wasting all this meat in another disastrous wine pie, but it was too late. 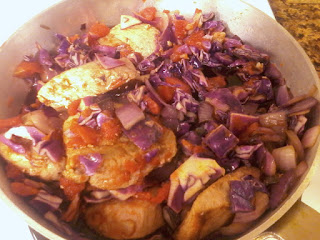 Anyone who is comparing this to the recipe will note we made a grievous error. We were supposed to cook everything for a while and then dump in the wine near the end. We figured we'd just leave it for the forty minutes it would have spent on the burner anyway and hope for the best.

We considered wine with dinner (we had half a bottle left anyway). But, given how much wine was already in dinner, having more with dinner seemed redundant. Hence, tea. 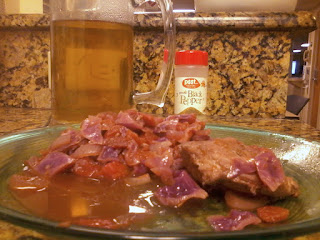 All right, we took a huge tray of meat and for some reason put it in a pot of alcohol and cabbage. What the heck did we get? Surprisingly white-on-the-inside meat, that's what. It almost looks like meat cake. 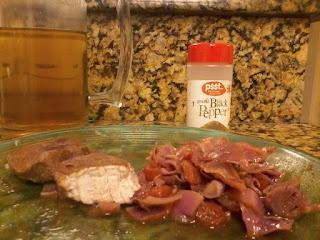 However, this was absolutely divoon. I've never had pork chops so tender, and the long stewing time melded everything wonderfully and took out the wine's pungency. The tomatoes didn't even taste like they'd come out of a can.
However, when we had leftovers the next day, the pork tasted like concentrated wine blobs. Since the cabbage and tomato stuff was still really good, there was a marvelously easy solution. 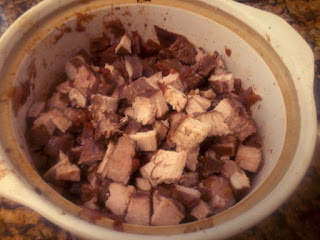 These were the best leftover sandwiches ever!

Would they have been better had we added the wine near the end of the cooking time like the recipe says? I have no idea. However, we at A Book of Cookrye would like to raise a wine-filled measuring cup to Maria Lo Pinto for making a whole cabbage head and a lot of wine absolutely divoon.
Posted by S. S. at 12:02 PM