Cabbage and Spinach, or I never thought I'd voluntarily make this

We at A Book of Cookrye have been driven to many new foods because they were on sale. It's amazing what you adapt to; the other day we found ourselves craving something made from frozen cauliflower and frozen spinach. We would like to point out that well into high school, we refused to eat cauliflower at all on the grounds that it was clearly broccoli that someone had dipped in bleach. With that in mind, we present...

Most of the ingredients looked pretty feasible except, well, no one sells Romano cheese anywhere. However, what was on sale but... 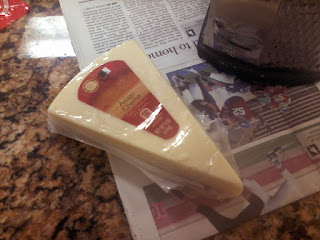 We at A Book of Cookrye would like to ponder the sociological implications of the fact that the cheaper cheese comes already grated, but the fancy stuff you have to shred yourself. Regardless, this cheese seemed close enough to the Romano specified in the recipe in that it stank through the shrink-wrap.

However, we had to proceed forward to the cabbage. (We actually didn't dread this; we think cabbage is a pretty good leafy vegetable with an unfortunately frumpy name.) The recipe's instructions make it look like you somehow loosen up the cabbage head, smear a little stuffing on each leaf, and then close the whole thing up. We had to see what this looked like before attempting it ourselves. An image search for "stuffed cabbage" only turned up images of what looks like egg rolls made with cabbage leaves instead of egg roll skins. Whether stuffed whole or made into egg rolls, this recipe seemed very laborious. We decided to just chop the cabbage and do some layered casserole thing.

We at A Book of Cookrye usually like to stick to a recipe's instructions exactly when making something completely new to us. How can you try something new when you revert to what you already know? However,  we generally don't choose such laborious recipes.

We at A Book of Cookrye aren't sure how this recipe is meant to work even if we did stuff the cabbage. The cabbage required two casseroles and the stuffing rations were puny. We'd thought we'd ration two layers of stuffing per thing. In retrospect, we shouldn't have.

It looks like we're about to make a lot of coleslaw, doesn't it? You'd never guess there was anything in there but chopped cabbage. 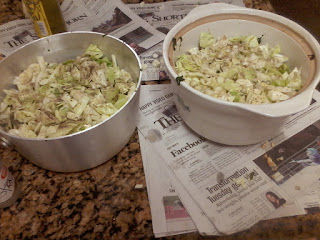 So, to recap, we've got cabbage interspersed with spinach and a tiny ration of meat. You could take this same ingredient list, put a new set of directions under it, and have some foofy salads for the girlfriend menu at the restaurant of your choice. Instead we baked it until everything was good and dead.

We thought we'd have a cabbage layered casserole. Instead, we had a pan of baked cabbage and what's that greenish stuff?

Unsurprisingly for something that had so much cabbage in it, it was an awful lot like the stuffing for egg rolls. Had there been more stuffing to go with it, it'd have been divoon. As it was, it was pretty good.
We at A Book of Cookrye have to admit, the idea of using cheese as a seasoning is new to us. Being American, it has always been the stuff you carpet the tops of casseroles with. Throwing a handful of it into something to give it a pungent kick appears a lot in the cookbook we got this from, but this was the first time we tried it and it's pretty good.
However, do not make this as your sole supper item unless you get completely full on salad alone because that's all you're getting when you make this.
Posted by S. S. at 3:23 PM