Do you like pulverizing frozen things? Then we at A Book of Cookrye have something really special for you! This is our lovely supper-to-be! We have made this many, many times and thought we might share how we've altered it to taste.


Every time I see a frozen spinach brick, I instinctively cringe (yet I still buy them). I don't mean a generic "oh, this will taste bad" reaction. I get a deep-rooted, this-traumatized-me-repeatedly-when-I-was-a-vulnerable-child urge to flee from the frozen spinach. This makes no sense as my mother just about never made us eat it.

However, we at A Book of Cookrye will treat the spinach like we would a vampire.

You know, I saw the recipe we started with floating around as a "gluten free pizza crust." And honestly people, stop kidding yourselves. I ain't saying this would be bad with tomato sauce and cheese on top, but attempting to pass it off as pizza would be a crime.

And now, like so many times before, we crank cauliflower through a meat grinder. We've gotten progressively lazier with this recipe- first we cooked it in the microwave, then we just thawed it out, and now we just take it straight from the freezer and pulverize it.

We at A Book of Cookrye would like to defend the much-maligned brick of frozen spinach. It's really only terrible if you boil it and then attempt to eat it. If you cover it with a whole bulb of garlic, half a shaker of pepper, and a massive blanket of paprika, it's downright edible. 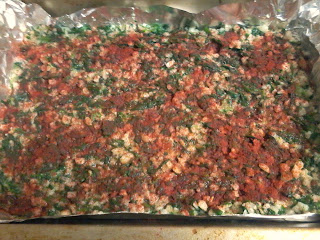 Although, seriously, frozen spinach actually is pretty good in casseroles and other baked things. It's just-- well, on its own, it's just mushy and sad.


Most people would set this out and patiently wait for it to cool. We at A Book of Cookrye would like to ask such people what it's like to have such patience.

Anyway, to wrap and sum up, this is pretty good. Also, frozen vegetables being as cheap as they are, we at A Book of Cookrye have this quite regularly. It has garlic in it. 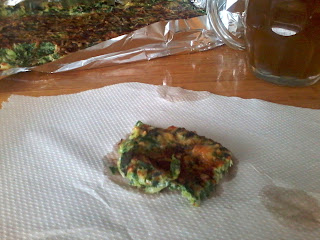