Mazel tov to us at A Book of Cookrye, for we have survived yet another slog of finals! Sometimes we amaze ourselves. This year was a particularly nasty finals round (see aforementioned theater tech-ing etc). We tried to prepare in advance by putting a massive vat of beans to soak overnight that we might cook them all at once and just have to microwave a plateload instead of cooking every night. However, we never had time to boil them, so they sat in the fridge waiting in their soaking water until finals week was over while we chased everyone who came within sight range carrying a pizza box.
To celebrate having staggered through all of our tests, we came home after the last one and fell straight into bed. Upon waking up in the middle of the night, we craved a lovely, creative sugar-bomb to make ourselves feel better. We also decided to use up this thing which turned up while cleaning out our room:

And for some reason we still have this:

Therefore, we decided to dump them into this and get...

You would think that lemon peel would be yellow, but for some reason it turns brown. Like, if the lemon peel got any uglier you could shove it at children and tell them to shut up and eat because it's good for you.

We may have been a bit overvigorous adding the sherry. There were impact craters. 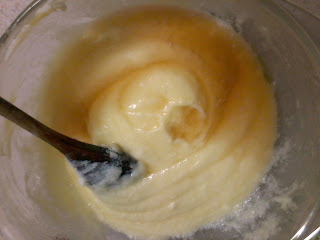 History lesson! In addition to beating the crap out of eggs, liquor was used to leaven desserts before baking powder was reliable. After all, a lot of early baking powders (and the things leading up to it like pearl ash) tended to not work or leave a nasty taste that required a lot of spices and such to cover up. Why do I say this? Because we're going to see how well spiking a cake to raise it works! I mean, generation upon generation of cooks can't be wrong, can they?

Purely for the heck of it, I looked up 1234 cake recipes online to see how many people stick to the four ingredients it's named for. The answer? Nearly no one! Just about everyone adds milk or something else to make it thinner and some baking powder to make it actually rise. In other words, they're making it actually turn into a cake instead of a sort of cake-cookie thing. So, I guess by adding sherry (liquid and leavener all in one! It's magic!) we're finally modernizing the recipe. 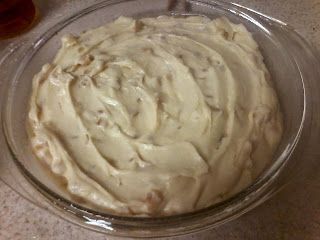 It occurred to us as the top got well-done as the inside stayed runny that maybe we had the oven too hot. Perhaps this should have baked at 325° instead. 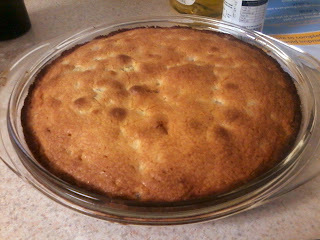 But never mind the top being overcooked. Finals are over and it actually came out like a cake! Look at it! It's light and fluffy and everything!

Also, for some reason the pungency of the sherry and the unnerving taste of the lemon peels canceled each other out, leaving a lovely lemony cake. I'd like to say it tasted really old-fashioned given how many old cakes call for alcohol and candied fruits, but I've never made any of them before so I don't know if it does. Nevertheless: A+, would make again (except I have no more lemon peel tubs).
Posted by S. S. at 8:35 AM