We at A Book of Cookrye would like to introduce a new term to you: theater herpes. It looks like this.

Why do we call glitter theater herpes? Because once it gets on you, it never goes away and you will find it in places you never knew it could get to. Therefore, when you're teching a musical that involves glitter, don't bring your lunch in a container you're planning to bring back home. After we washed this off, glitter got on the kitchen sponge. Then it got on the counters because someone else used said sponge to wipe them. I've been finding stray pieces of glitter everywhere. I go to class, it's on the table. I get dressed, it's on the inside of the shirt I haven't put on yet. I should have just quarantined the bowl or just accepted the loss rather than taking it back home and doing this. 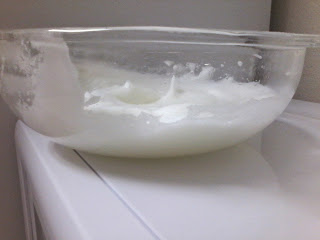 You may be wondering why I have a bowl of egg white foam. Finals are upon us, that's why. We at A Book of Cookrye have been so busy we've barely had time to touch the ground. Hence, we needed some sustenance to keep us going as we cracked open textbooks and valiantly attempted to read them.

This, my friends, is a recipe for coconut cake in Emily Dickinson's handwriting. Well, it's the ingredients for it at any rate. I suppose Emily Dickinson figured she'd know what to do without writing down the instructions and little suspected that we would be going through every surviving scrap of paper she ever wrote anything on a century later. Well, we at A Book of Cookrye decided to guess our way through the instructions. Given that there is no other leavening in this cake, we figured it's probably the eggs. Hence getting glitter all over the kitchen- we needed two bowls.


A lot of people have written articles about how much Emily Dickinson liked to cook- and most of them use the same "I'll bet you didn't know that..." slant in them. This recipe comes up in a lot of them- Dickinson didn't leave as many recipes as she did poems, so people writing about her cooking have to use the same seven or so. At any rate, depending on where you read, the Mrs. Carmichael named in this recipe was either a family friend, a neighbor, or just someone else who lived in Amherst. I wonder if her descendents have any other recipes of hers?

We at A Book of Cookrye figured with this recipe, you would mix everything together except the egg whites which you carefully fold in at the very end to raise it. However, it didn't look like this could possibly be mixed together without beating all the air out and getting a very flat cake afterward. 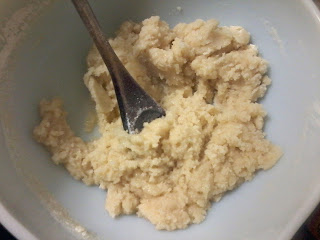 Also, do you have any idea how much grated coconut you get out of a whole one? See, the original recipe calls for one grated coconut and-- well, fresh coconuts are a bit of a specialty item that require chisels and hacksaws. I'll admit that due to having so many things to put off doing, I didn't spend much time looking it up. That said, the store had expensive bags of coconut that were still kind of soft, and really cheap bags of it that felt like they'd bagged cardboard. Guess which one we bought!


Believe it or not, this is the first time we haven't wanted to eat the cake batter. Heck, we even liked the avocado cake batter a little bit. But this... the coconut shards were like biting into fingernail clippings. You know how Upton Sinclair's The Jungle had all those icky descriptions of the food industry? Well, we at A Book of Cookrye began to suspect that whoever packaged the coconut we'd purchased had adulturated it with bone shreds. Maybe Mrs. Carmichael was right to say we should buy the coconut and grate it ourselves.

Well, whatever was in this cake, it smelled really good by the time it was done. 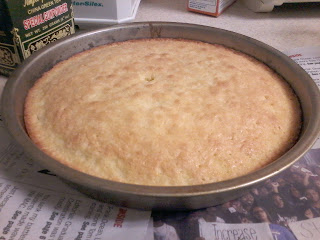 And... this cake is delicious. It's really light and amazing. Emily Dickinson, we at A Book of Cookrye salute you for having gotten your neighbor to write it out. (Also, the coconut/bone shreds softened while it cooked.) 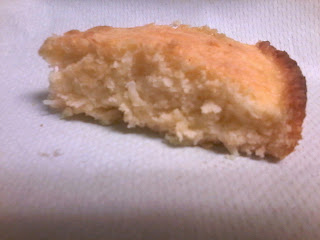