We at A Book of Cookrye are pleased today to once again dig out forgotten recipes of yore! ...Well, actually, this one isn't completely forgotten seeing as we got it off of an NPR article, but there you go. At any rate, we needed something delicious enough to make studying for finals bearable. We've already done Emily Dickinson's neighbor's coconut cake, why not do the one from Dickinson herself?


I'm having a hard time believing the person who wrote the article is, as claimed, a Dickinson scholar. How could someone who's going that deep into debt to study Emily Dickinson not find out early in her studies that she liked to bake and was locally famous for it? The Emily Dickinson Museum has a whole page dedicated to how much she liked cooking. Even the bottom-of-the-page biography blurb in my high school English book said that at her most reclusive, she was still known for lowering baskets of baked goods on a rope out the window to children below.

Emily Dickinson didn't write the instructions, but that's fairly common for recipes that are notes to self. Or, if you're writing them out for friends, you tend to leave out any steps that you figure they'll already surmise- which often leaves you with a list of ingredients and a cooking time.
This looks like a pretty normal modern-day cake recipe aside from stirring coconut into it. Based on the ingredients list, Emily Dickinson did not subscribe to the Mrs. Goodfellow baking-powder-is-evil style of cooking.

Emily Dickinson must have really liked coconut cake because two different recipes for it survive among her papers. They look like they'd come out really different. She attributed the other one to someone named Mrs. Carmichael, who people describe as either a family friend, a neighbor, or just someone who also lived in Amherst. This one just has the note that it makes half of the full recipe. I don't know why she divided the recipe in half before writing it down, but it looks like it'll make a nice little cake. 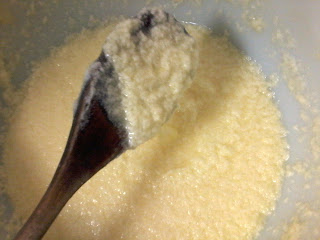 I always get a little unnerved seeing the butter in little curds- I once threw an entire batch of half-mixed cookie dough out because it looked like this and I was certain that either the recipe was faulty or I'd ruined it.
At any rate, we had some tasty, tasty cake batter. It's a lot thicker than cake batter usually ends up being, though. 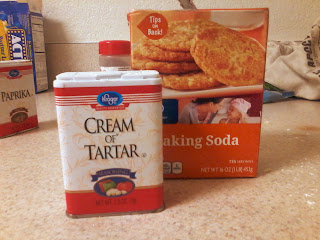 And now, we turn this from a regular cake into a coconut cake! Surprisingly given the time period, the recipe calls for pre-grated coconut by the cup and not for a coconut which you then shred for yourself. Incidentally, while you'll find plenty of coconut cake recipes around today, a lot of them are a regular cake with lots of coconut in the icing or between the layers. It seems the idea of putting coconut into the cake itself has gone out of style. 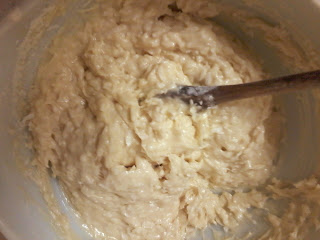 Look at how thick this is! 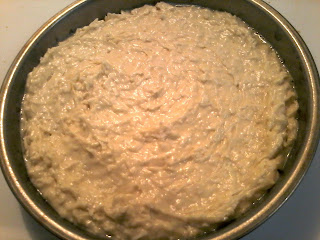 Here, I must confess that due to aforementioned finals studying, I kind of forgot to check whether the cake was done.

However, and here's how you know this recipe is worth holding onto, it still was fricken perfect! How many cakes come out just fine when you nearly burn them? Now, this article said that Emily Dickinson and her friends used to dip the cake in sherry. Guess what I still haven't used all of?

I might have liked it if I liked sherry. But I don't. However, the cake itself is absolutely divoon. Also, and this is well worth keeping in mind when frazzled and worn out, it is surprisingly resilient to overbaking.
Posted by S. S. at 1:55 PM