We at A Book of Cookrye haven't dug out any really old recipes in a long time.
With that in mind, a friend got this from the nearby overpriced pizza place:
This put us in mind of a recipe we'd been looking at for a while now. 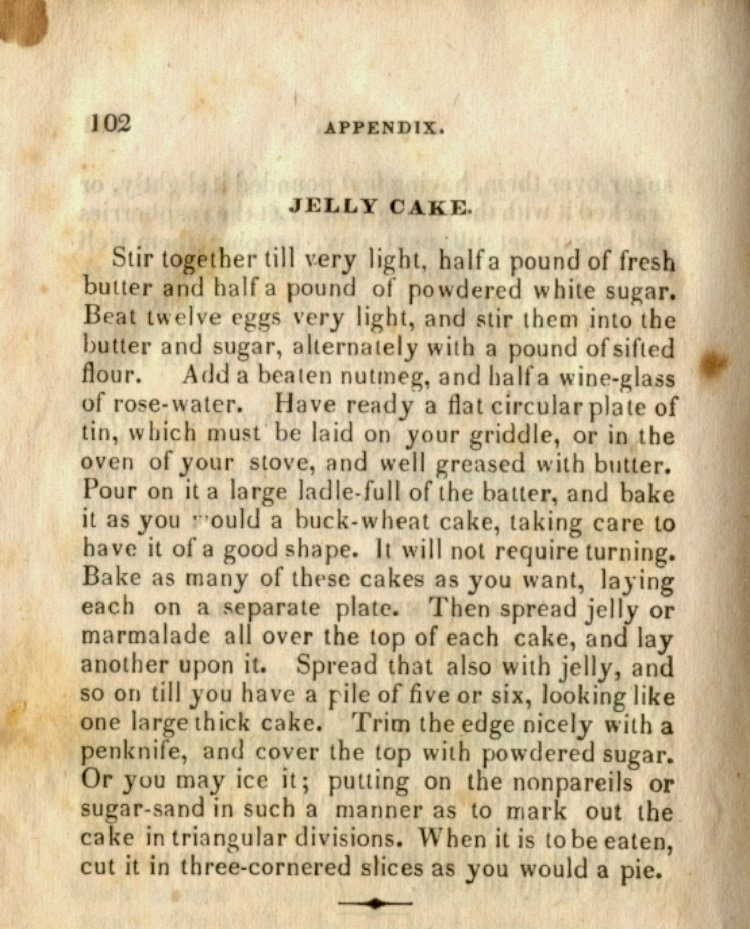 Aside from the fact that the ingredients look like they'll make a lot of jelly cake (hence cutting it in half), it looked like a really amazing idea. It's rose water - nutmeg crêpes stacked with jelly and iced like a cake! Furthermore, it says right there "It will not require turning," so my inability to flip a pancake will not get in the way.


Let's look at the beginning of the second sentence of the original recipe: "Beat twelve eggs very light." Those five words meant that a lady of 1832 had over an hour of work for her. Miss Leslie had plenty to say about beating eggs in one of her later books. Keep in mind that at the time, the best you could come up with was a whisk; even the hand-cranked egg beaters hadn't been invented yet.

In making cakes it is of the utmost importance that the eggs should be properly and sufficiently beaten; otherwise the cakes will most certainly be deficient in the peculiar lightness characterizing those that are made by good confectioners.... Cakes cannot be crisp and light without a due proportion of the articles that are to make them so; and even then, the ingredients must be thoroughly stirred or beaten; and of course thoroughly baked afterwards.

Persons who do not know the right way, complain much of the fatigue of beating eggs, and therefore leave off too soon. There will be no fatigue, if they are beaten with the proper stroke, and with wooden rods, and in a shallow, flat-bottomed earthen pan. The coldness of a tin pan retards the lightness of the eggs. For the same reason do not use a metal egg-beater.

In beating them do not move your elbow, but keep it close to your side. Move only your hand at the wrist, and let the stroke be quick, short, and horizontal; putting the egg-beater always down to the bottom of the pan, which should therefore be shallow. Do not leave off as soon as you have got the eggs into a foam; they are then only beginning to be light.

But persist till after the foaming has ceased, and the bubbles have all disappeared. Continue till the surface is smooth as a mirror, and the beaten egg as thick as a rich boiled custard; for till then it will not be really light. 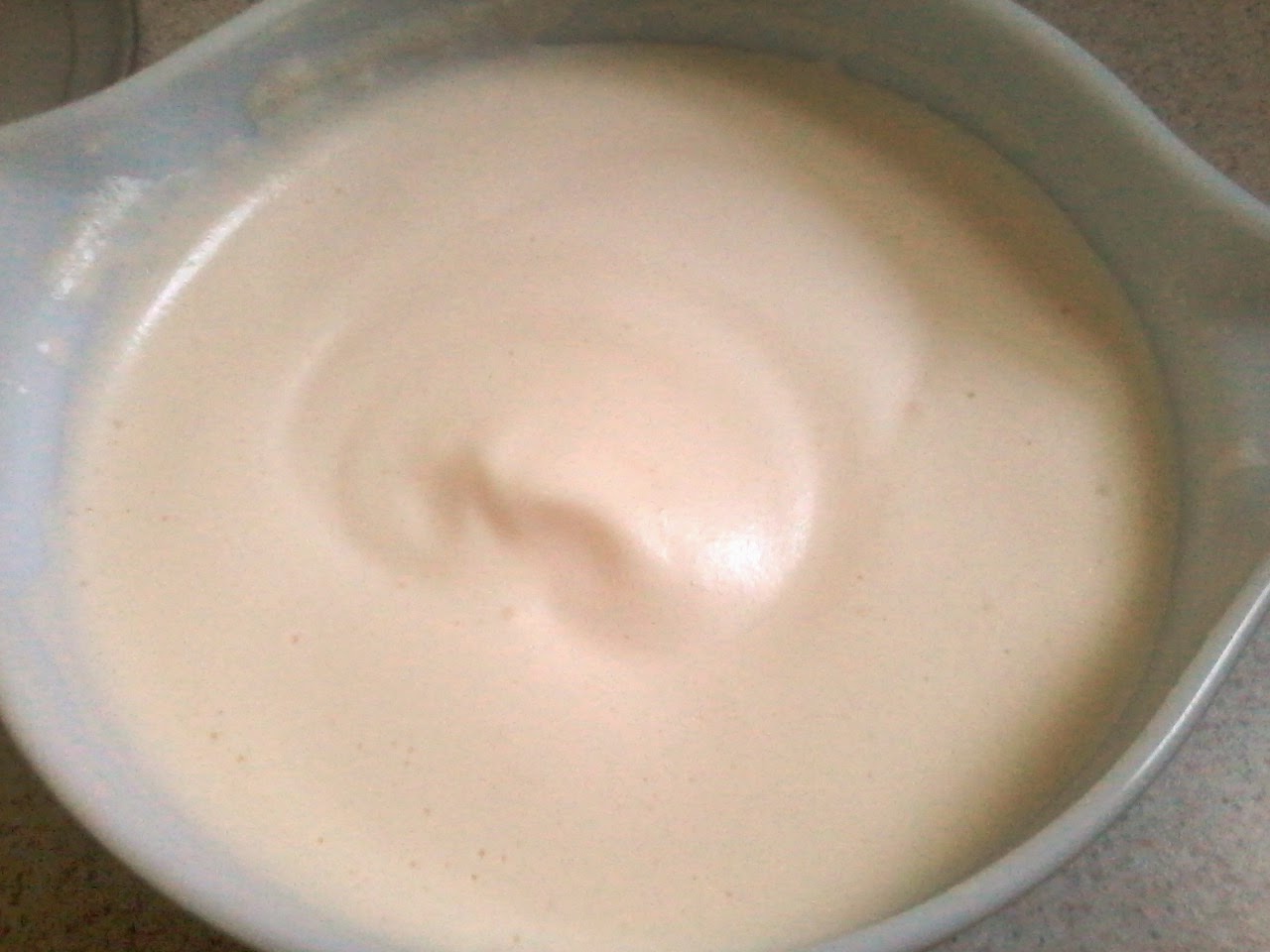 Can you hear the sound of women dropping their wooden rods and cradling their wrists while swearing? Also, how does someone who ended a page of instruction by telling her readers they will never be good enough end up being one of the most prolific cookbook writers of her century?
At any rate, had I spent over an hour beating eggs until they filled the bowl, I'd have smashed the earthenware pan to the floor and cried upon seeing how much the eggs deflated on contact with the rest of the ingredients.

Such distress might explain why I accidentally grabbed the wrong shaker and peppered the- and I use these next two words loosely- cake batter.

After carefully scooping it off and adding the nutmeg  (which hopefully would cover the taste of any pepper granules I missed) and rose water, we finally get to crêpe making! Or so we thought. The recipe makes it look like you ladle this onto the pan, but that did not work. 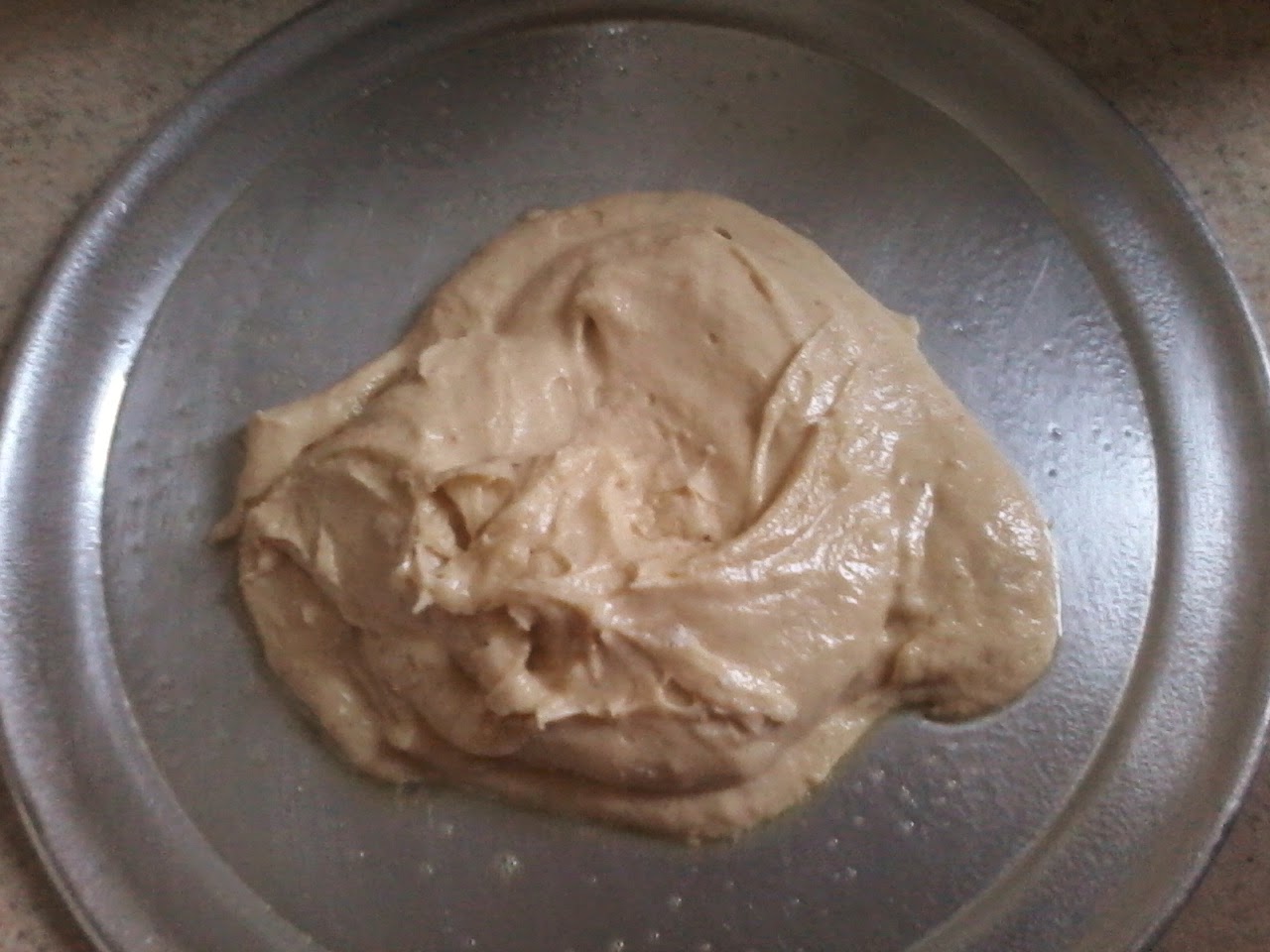 Figuring these were already mixed and therefore I may as well bake them, I patted and coaxed the dough into flatness and baked it. Maybe all this time beating the eggs actually did something. The crêpe rose off the pan so fast you could see it floating up.

Once the first batch of dough was done, I realized this wasn't going to be spiffy crêpe stack. They were very firm cookie-patty things. You could carry an order of shots to a table on one of these. 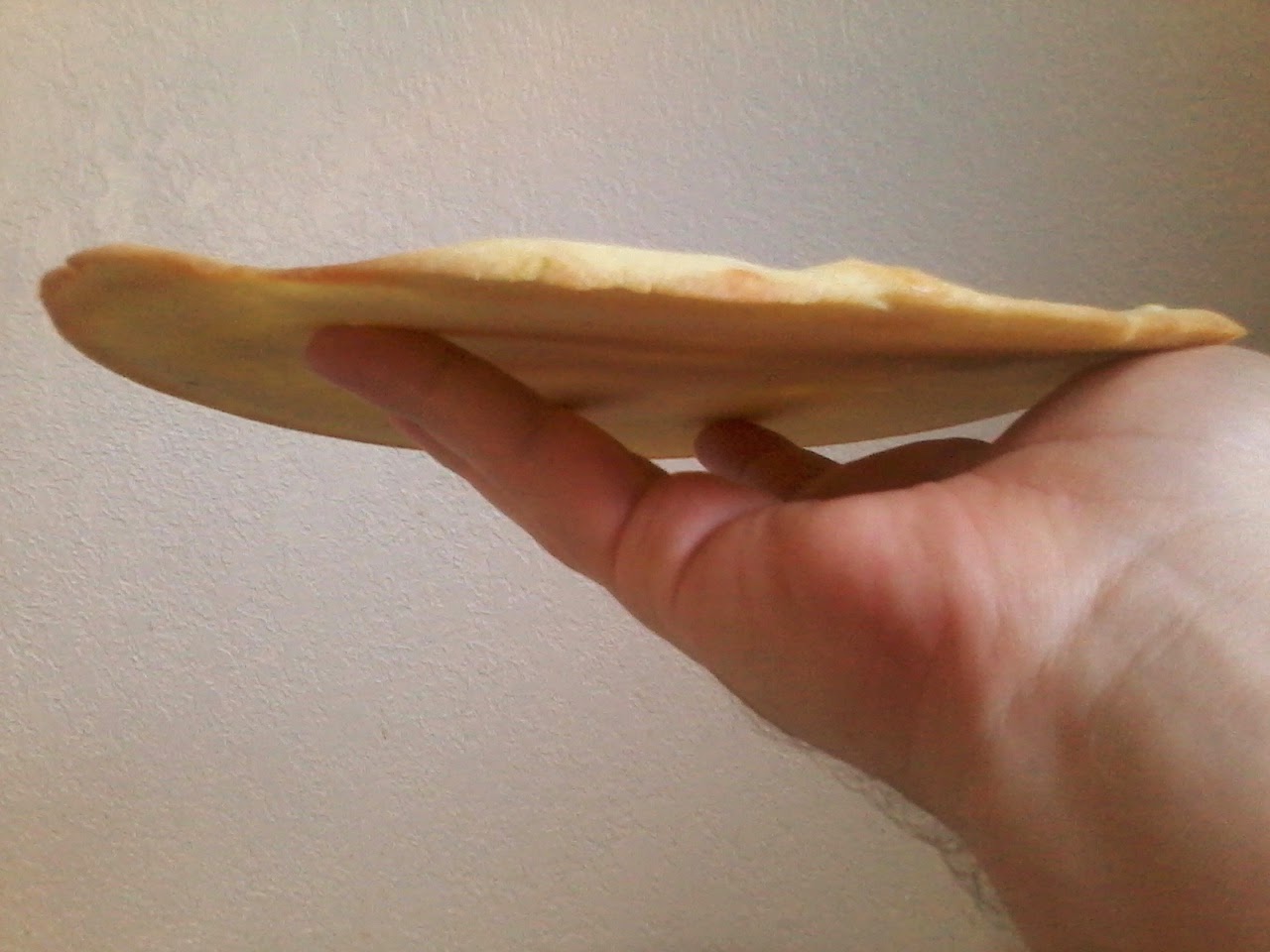 All the work in this recipe- the separate plates (which you later get to wash) for each cake-cookie thing, the egg beating(!), and everything else- makes more sense when you realize that more people had servants than just the very rich- even if it was only a cook or maid who came in every few days. Besides beating the eggs, they would have washed all the separate plates for laying each of these out on.

This appeared to be shaping up as intended. Having cut the recipe in half, we had half as many cookie-patties. Had we made six, they would stacked up to about the height of a cake. Also, did you know that for some reason, the reduced sugar jelly at the store is made with sugar rather than corn syrup? 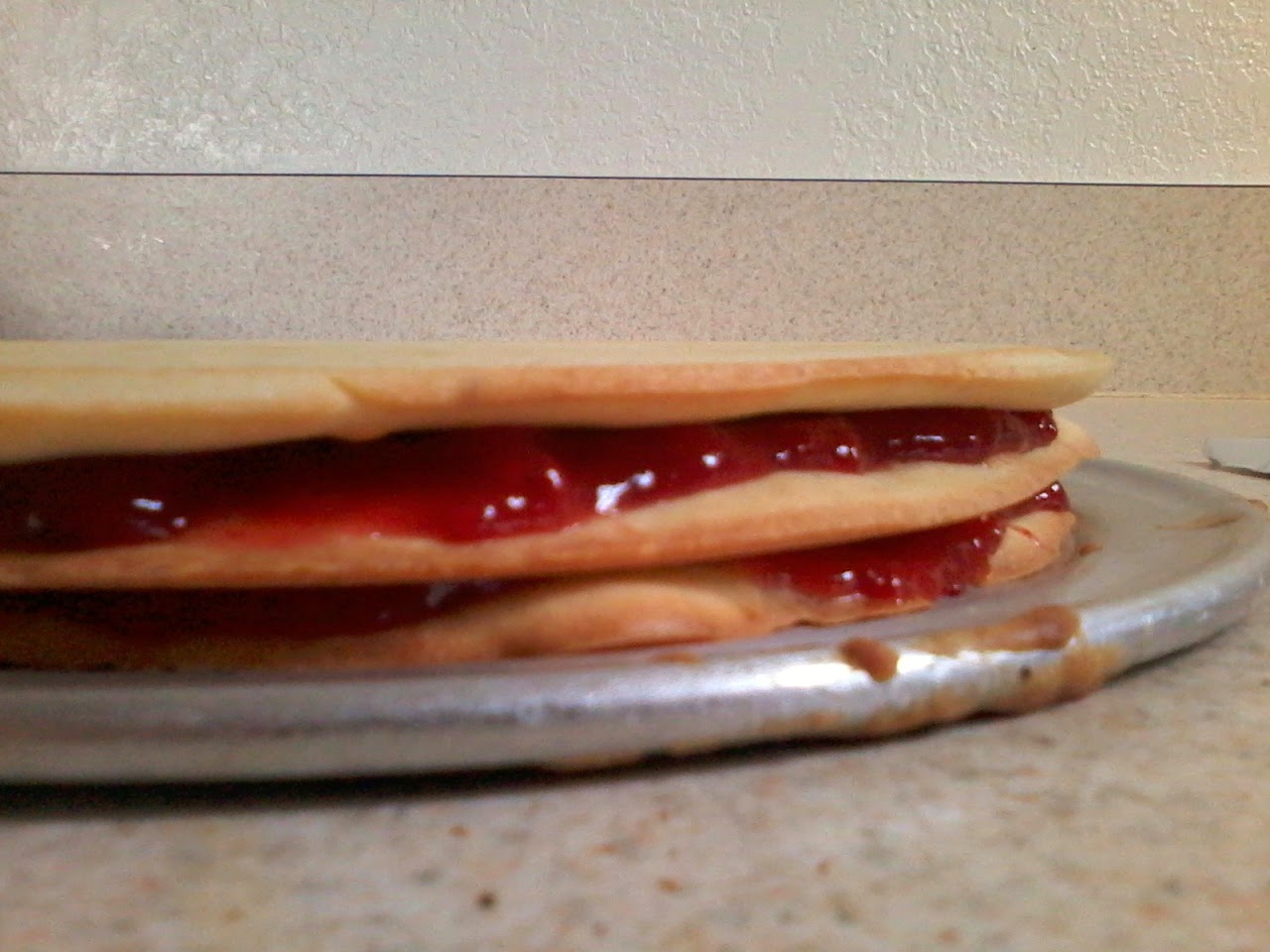 After butchering it attempting to trim it nicely, there was only a cake stump bleeding all over the pan. 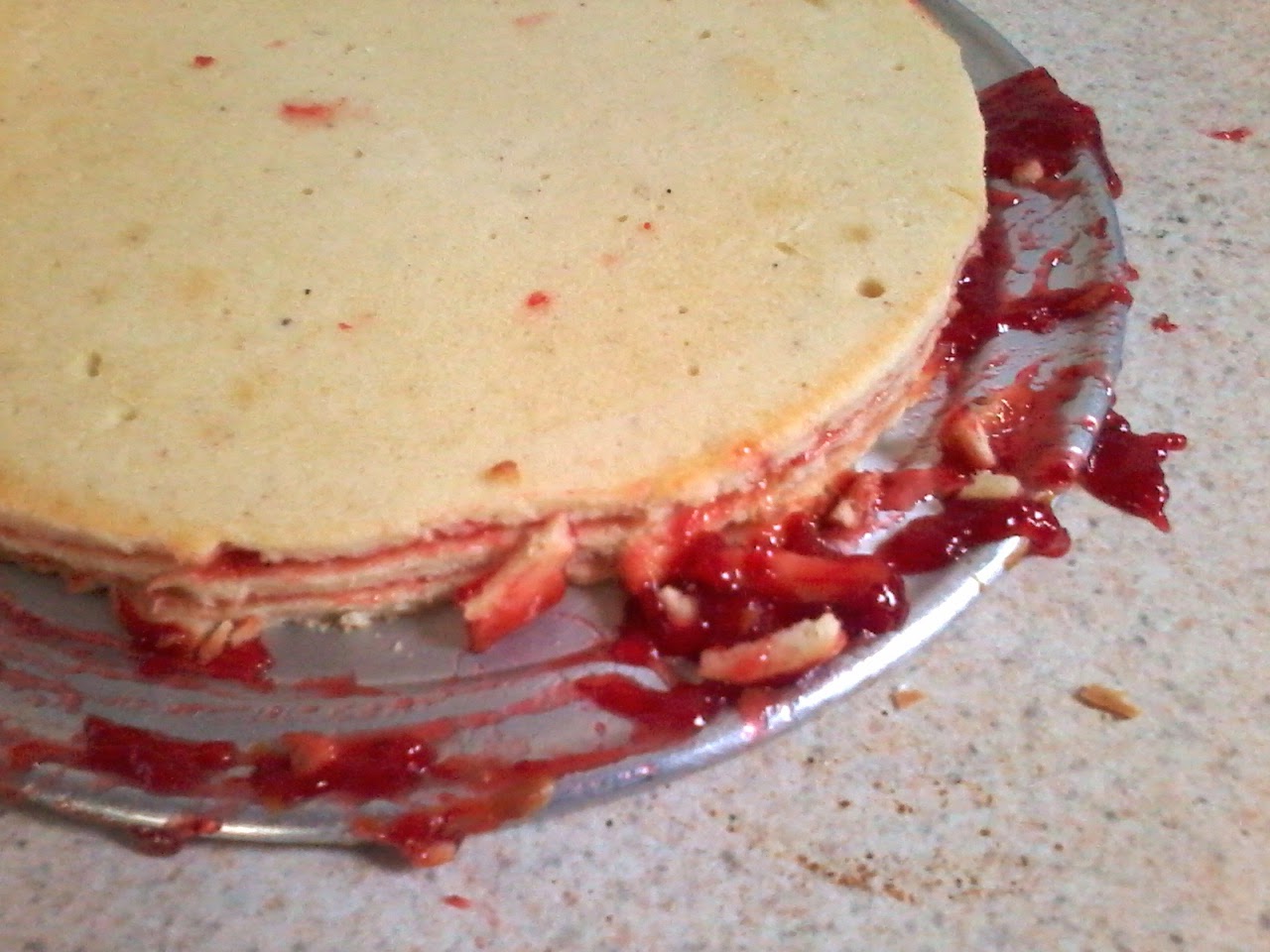 It looked even more sad and short when iced. It then occurred to me that I could have cut each in half and done an impressively tall semicircular cake instead.

Also, as one might have guessed by how stiff the layers ended up, this thing needed a lot of knife pressure to slice. The layers slid around a bit. 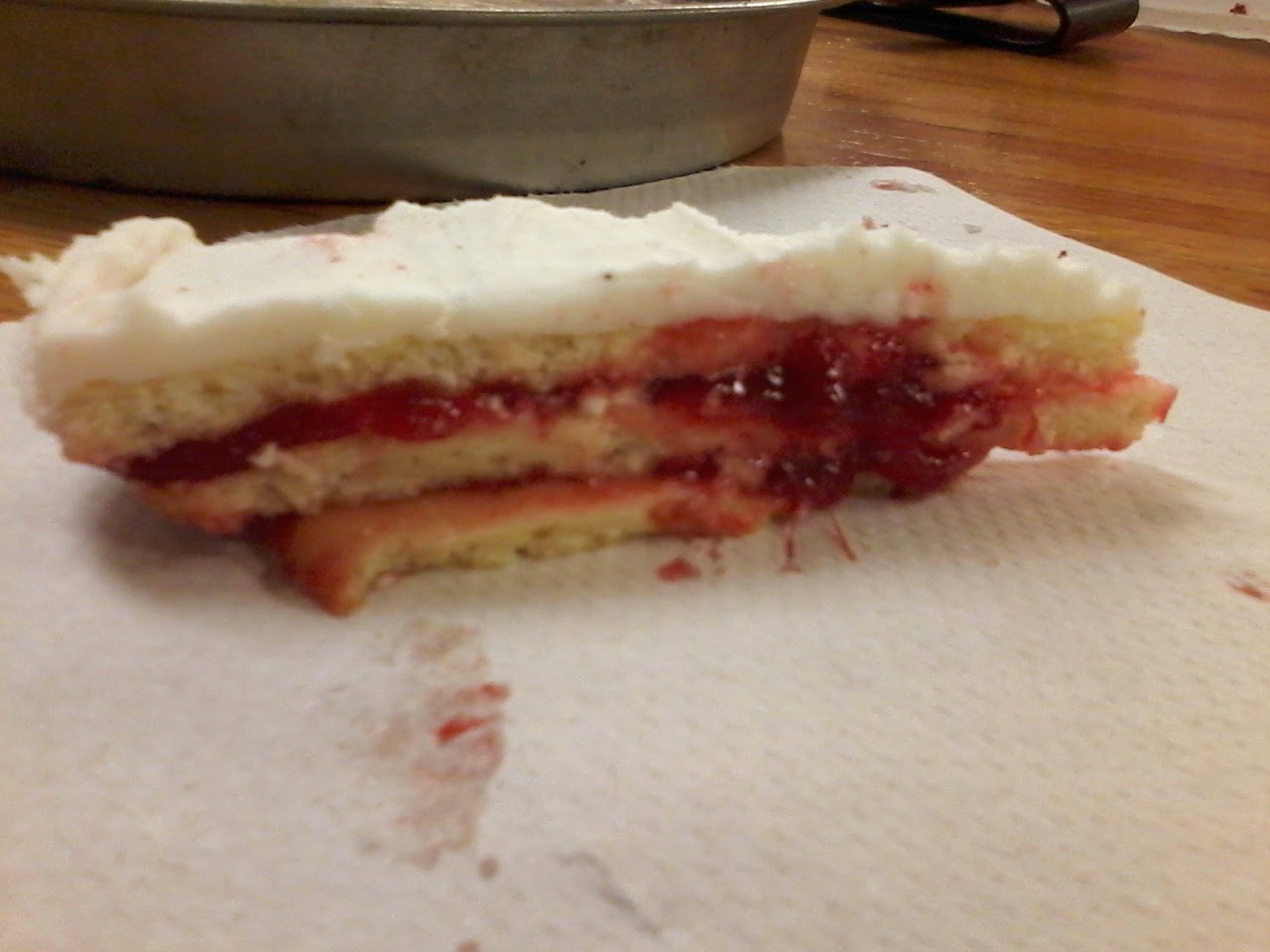 Honestly, the jelly did this no favors. The cookies had a really nice, surprisingly subtle flavor to them and the jelly overwhelmed that. Homemade jelly would have been better, but I didn't think of going to a farmer's market.
A friend from the Philippines said if I gave her the recipe, she could Asian-ify it. When asked what that meant, she thought about it and said "Fresh fruit." Which.... you know, stacking these with fruit instead of jelly would be absolutely delicious. These cookies were made to stack with fruit. And since no one need spend forever hand-beating eggs, they're surprisingly easy to make.

----------------------
Note:
Elizabeth Goodfellow was the owner and operator of the first cooking school in the United States.
American cooks were the first to use baking powder (well, things that would later evolve into baking powder) instead of whipping eggs until your arm gave in. In fact, the first cookbook written by an American is also the first published cookbook in the world where you could use a spoonful of powder to save yourself over an hour of work. However, Mrs. Goodfellow had views on such practices and passed them emphatically on to anyone in her school. Miss Leslie was one of her students and if she had to spend all this time with a pan and stick, you have no excuses. ↪
Posted by S. S. at 12:12 AM