Frightening ourselves in the kitchen: Avocado Cake or, So you can substitute avocado for butter, eh?

Y'know what? This site has been a bit devoid of anything adventurous lately. Sure, there've been some disappointments, but aside from a couple of attempts at carrot cake, nothing's turned out particularly bad. Even the quiche was salvageable. Therefore, we at A Book of Cookrye are tiptoeing cautiously into the unnerving, surprising, often frightful world of diet foods! Furthermore, we've got pictures of someone eating said diet foods!
There's this rumor going around some of my dieting friends that you can substitute avocado for butter and... er... something... healthy fats... cholesterol... something. Which brings us back to Marcus' kitchen and to...


You may recognize the recipe this started from- it's one of my favorite things to make. I reduced it to as small an amount as I could before I had to try to get half an egg. And now, because I just thought what I was about to do was so ridiculous, I took a picture of all the cake ingredients on the table. 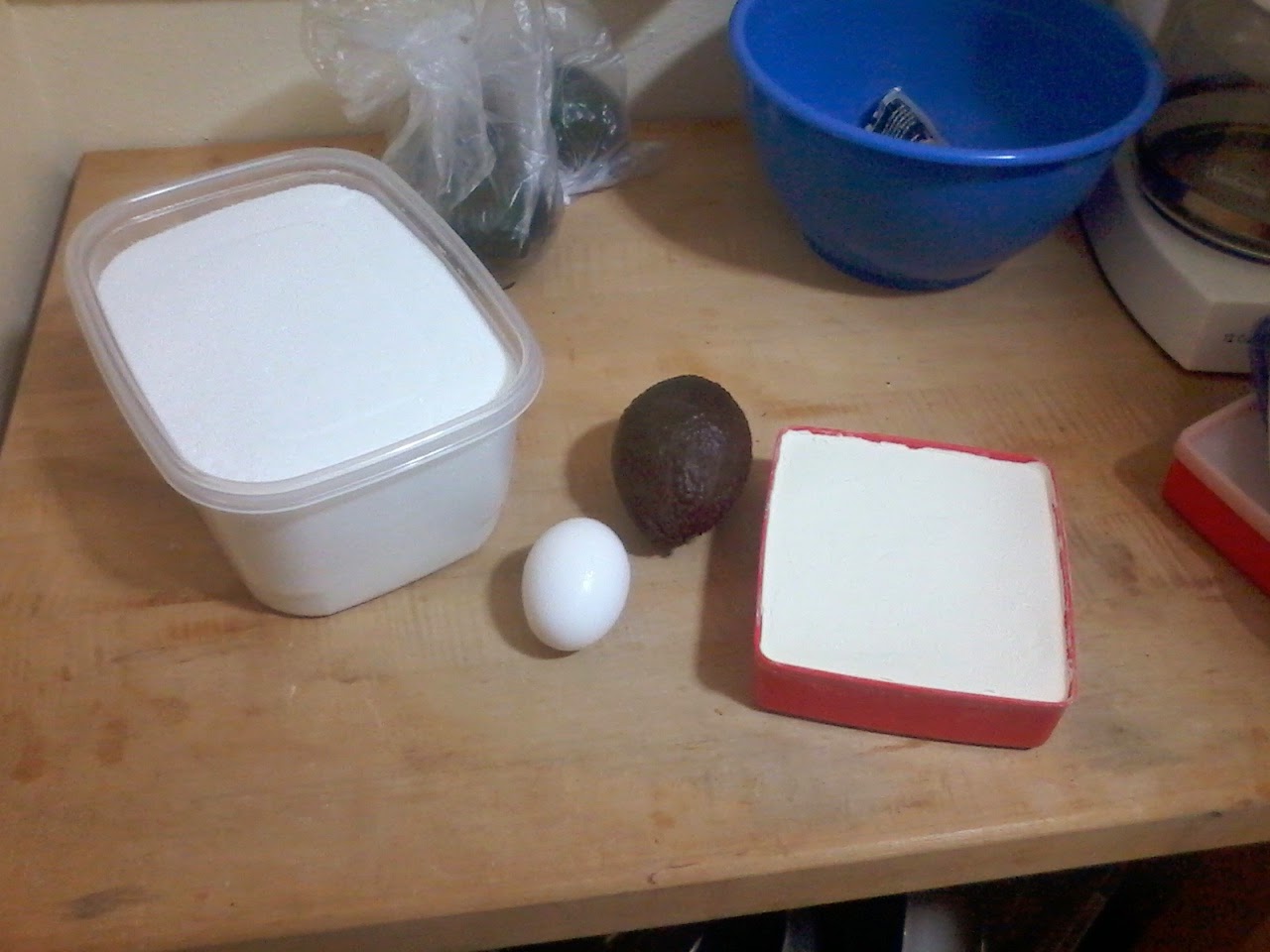 Making diet "dessert" recipes always feels kind of ridiculous to me. I don't mean the desserts that are already diet on their own like those raw fruit tarts- those range from "eh, it'll do" to really good. I mean diet as in taking something that's unapologetically bad for you and trying by means of wierd substitutions and such to make it into something that won't break your diet. It always feels like something has gone very wrong when I'm making them.
The substitutions and modifications always add a lot more required effort to making the desserts. Given that you're making a sad imitation of whatever the recipe says it's supposed to be, eating the end result is adding insult to added drudgery.

Since all diet recipes call for gratuitous added effort, the avocado did not want to mix in. This is how lumpy it was after I beat the crap out of it for a long time:
So I tried my usual method for when two things refuse to mix together. 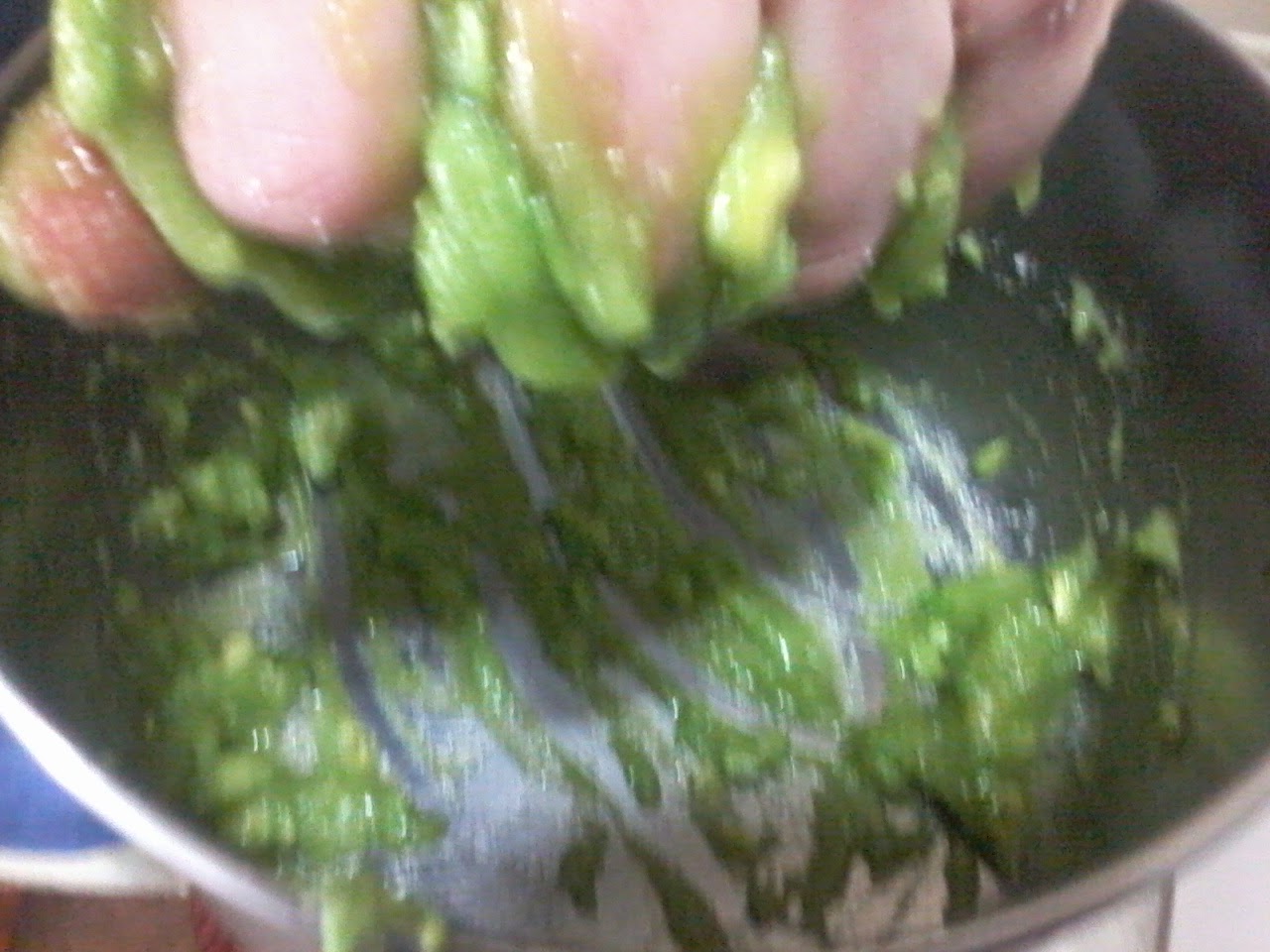 It soon became evident that hand-mashing wouldn't work this time. We got out a whisk and, as Fanny Cradock would do, thought of someone we really really don't like but we're too well-bred to say what we think of them. It got most of the lumps out.
This actually reminds me of how every year on my birthday when my mom and I were making the cake, I would insist we add food coloring. I only got away with it on my birthday. Many a year my cake was blue. Once I dyed it lavender, which once I put jelly between the layers and white cream cheese icing on the outside, looked really pretty. Another surprisingly decorative combination was bright green with caramel icing on top- the brown icing set it off very well.
I'm probably supposed to claim I've grown up and left unnaturally colored birthday cakes behind, but I haven't. I did attempt to make it somewhat normal by making a red velvet cake, which is the only one I know of where people expect you to dump in a whole bottle of food coloring. But a light blue birthday cake just looks really cool.

Oddly enough, adding the flour brought the batter from bright green back to what you'd actually call avocado-colored. 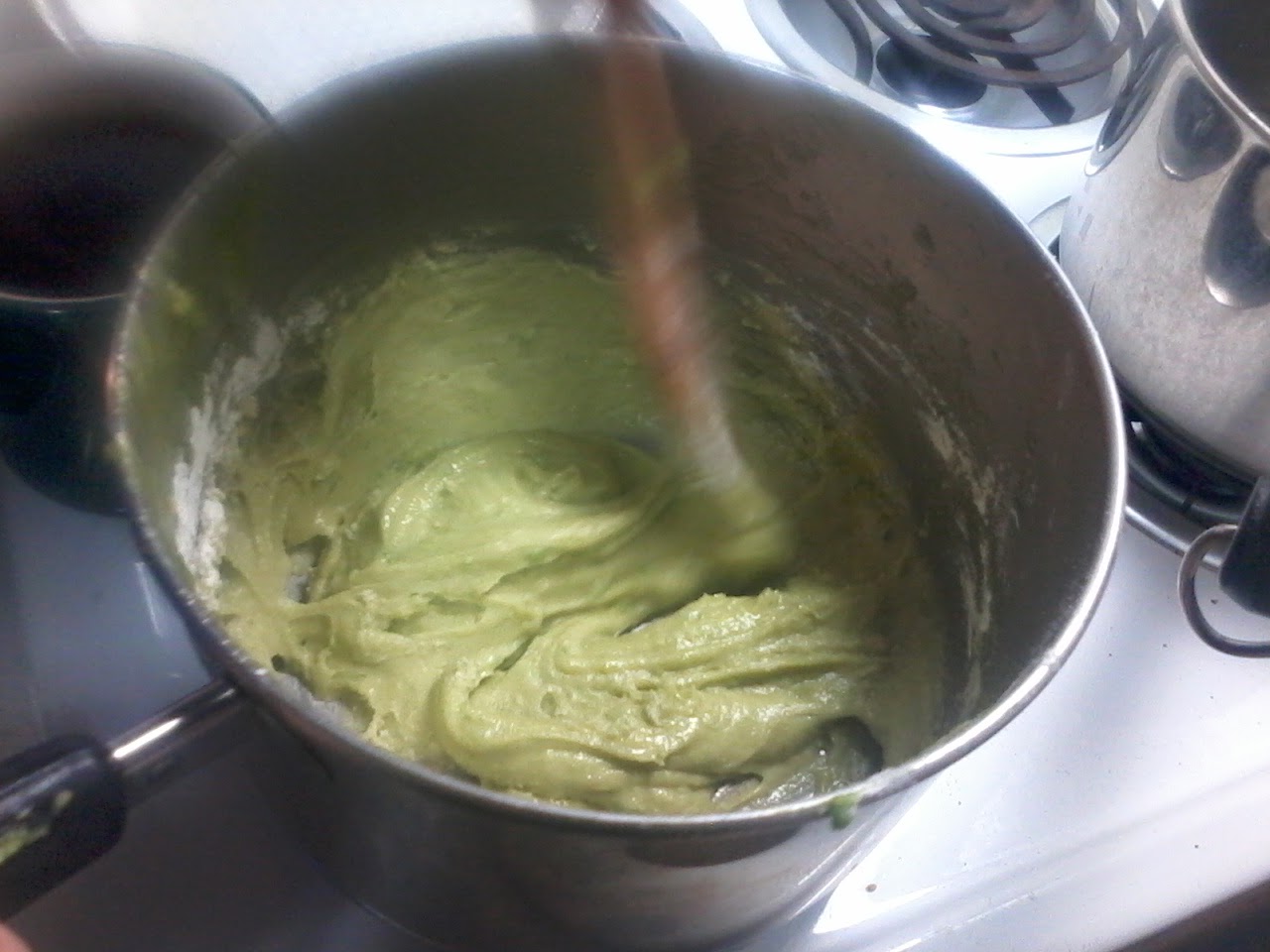 At this point, I'd like to point out something that says a lot about me. Despite knowing perfectly well what was in this, I got mad when Marcus pointed out there wasn't enough batter in the pan so I had to get out a rubber spatula and properly scrape the pot. Also, we don't have a tiny cake pan, so a miniature pie pan stood in.

My deep love of cake batter makes no exception for avocado cake. I actually tried it and it was... interesting. The flavor was definitely different, but once you got past the novelty, it was actually good. It actually set me thinking how limited the range of flavors in American desserts really is- this was really good, but it took me a couple of minutes to get past it being unlike anything I've had. It wasn't as heavy as when I make it with butter, and tasted... well... fresh and green. I think it'd have actually been really nice in a sorbet when it's really hot out.
With that, into the oven it went!

All right, here it is!
Well, we've got a green avocado cake! Behold, a slice! Looks relatively normal, doesn't it?
And now, here's Marcus actually tasting what is in fact a cake with avocado in it. 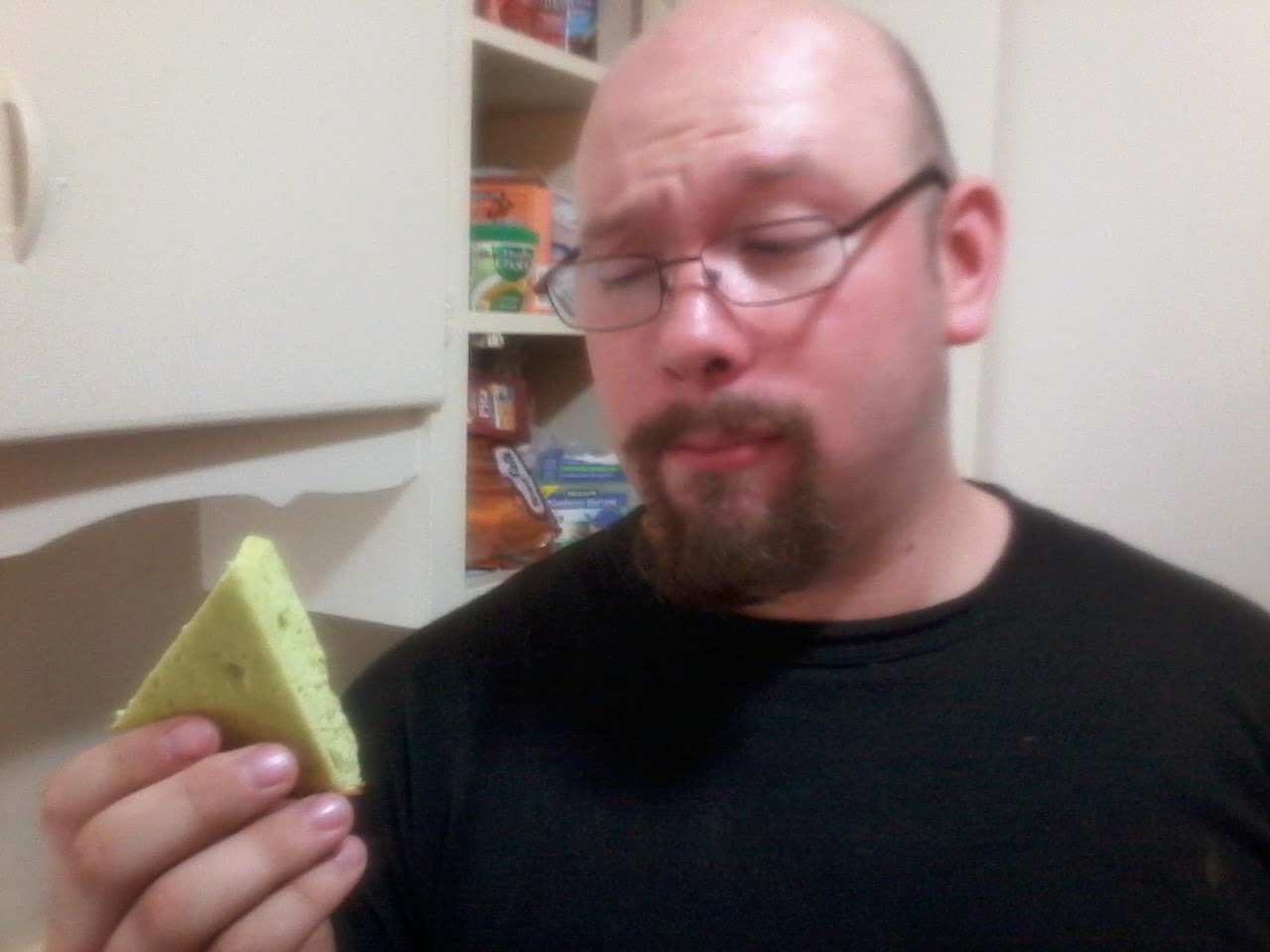 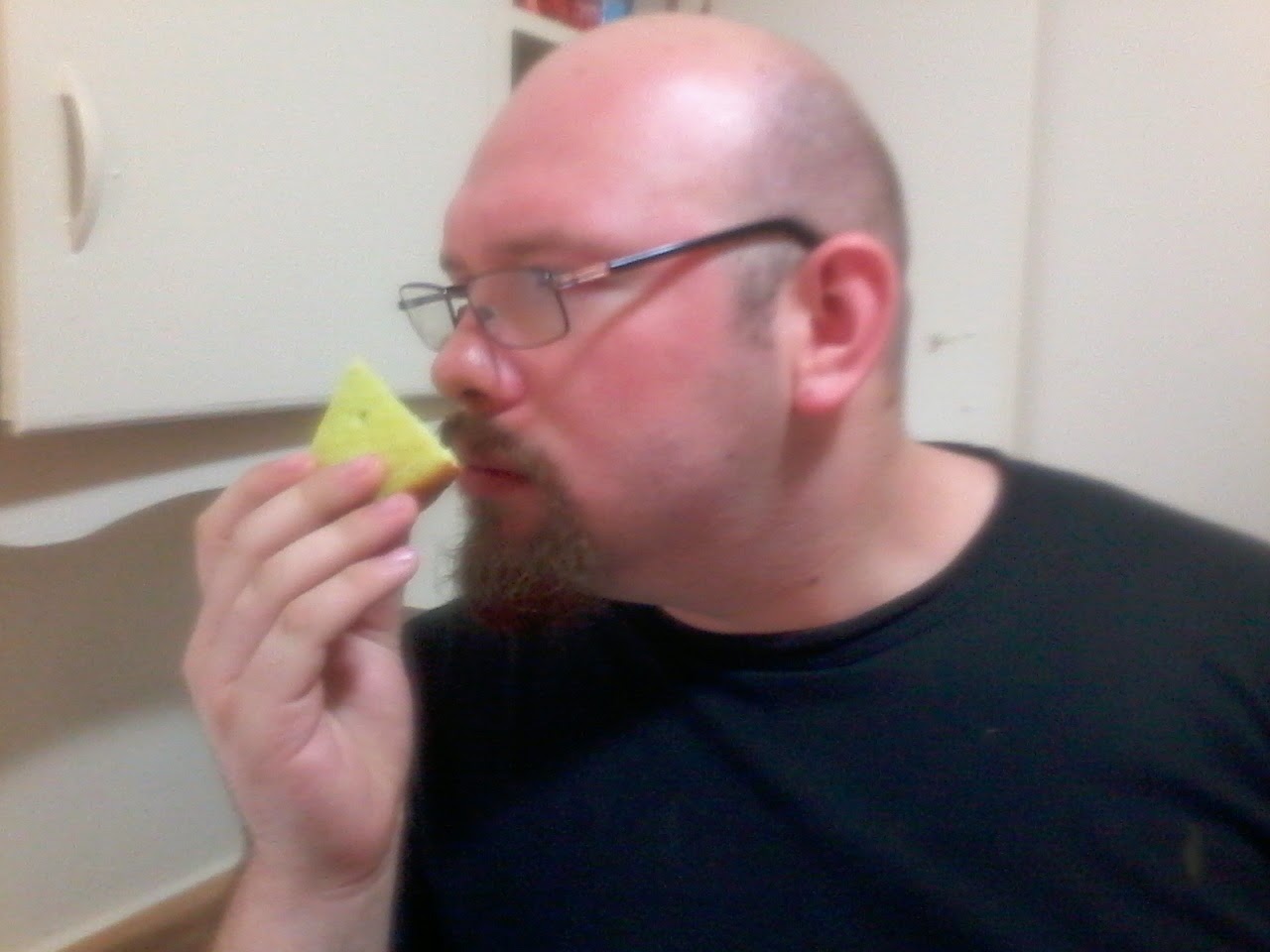 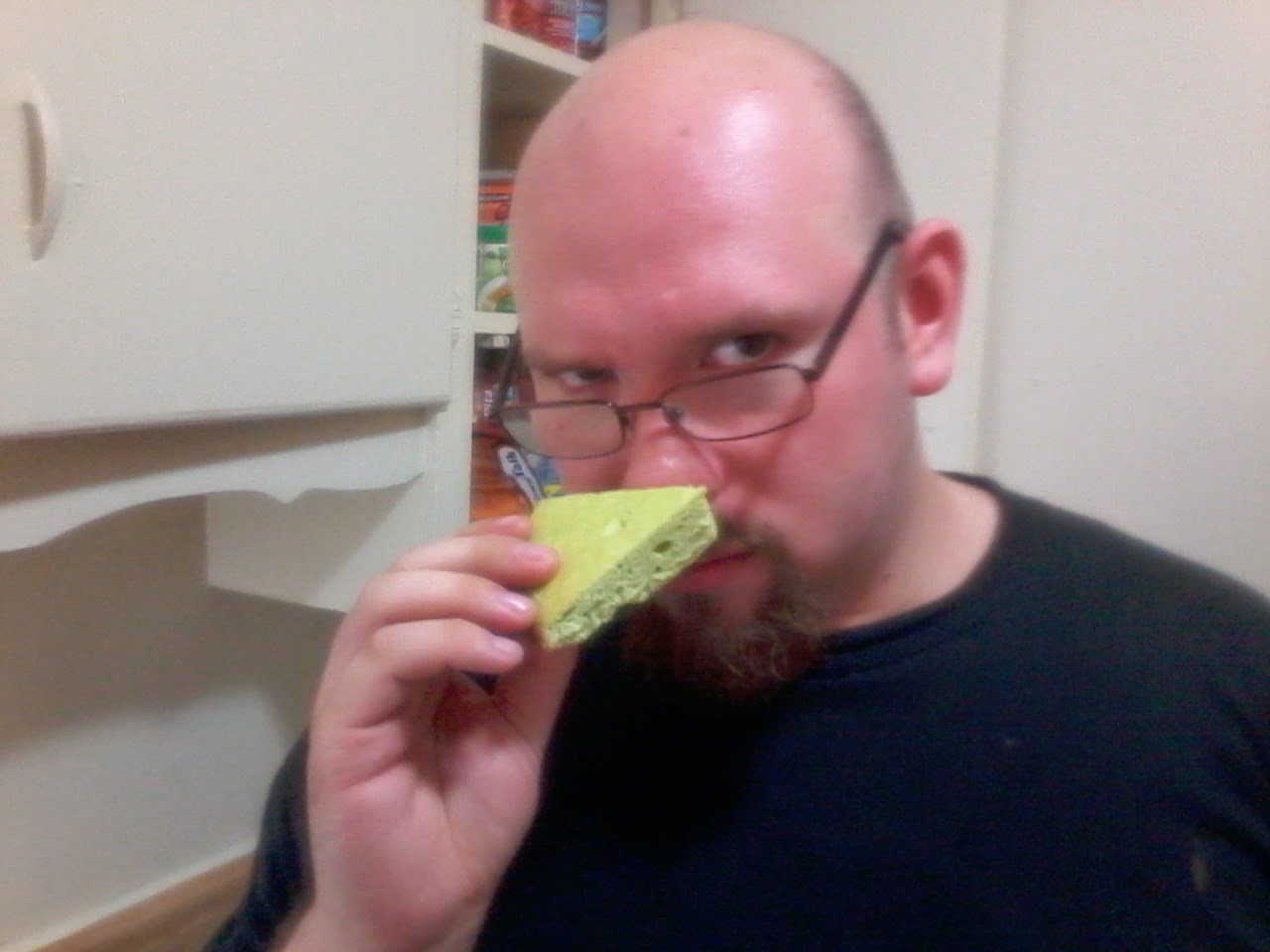 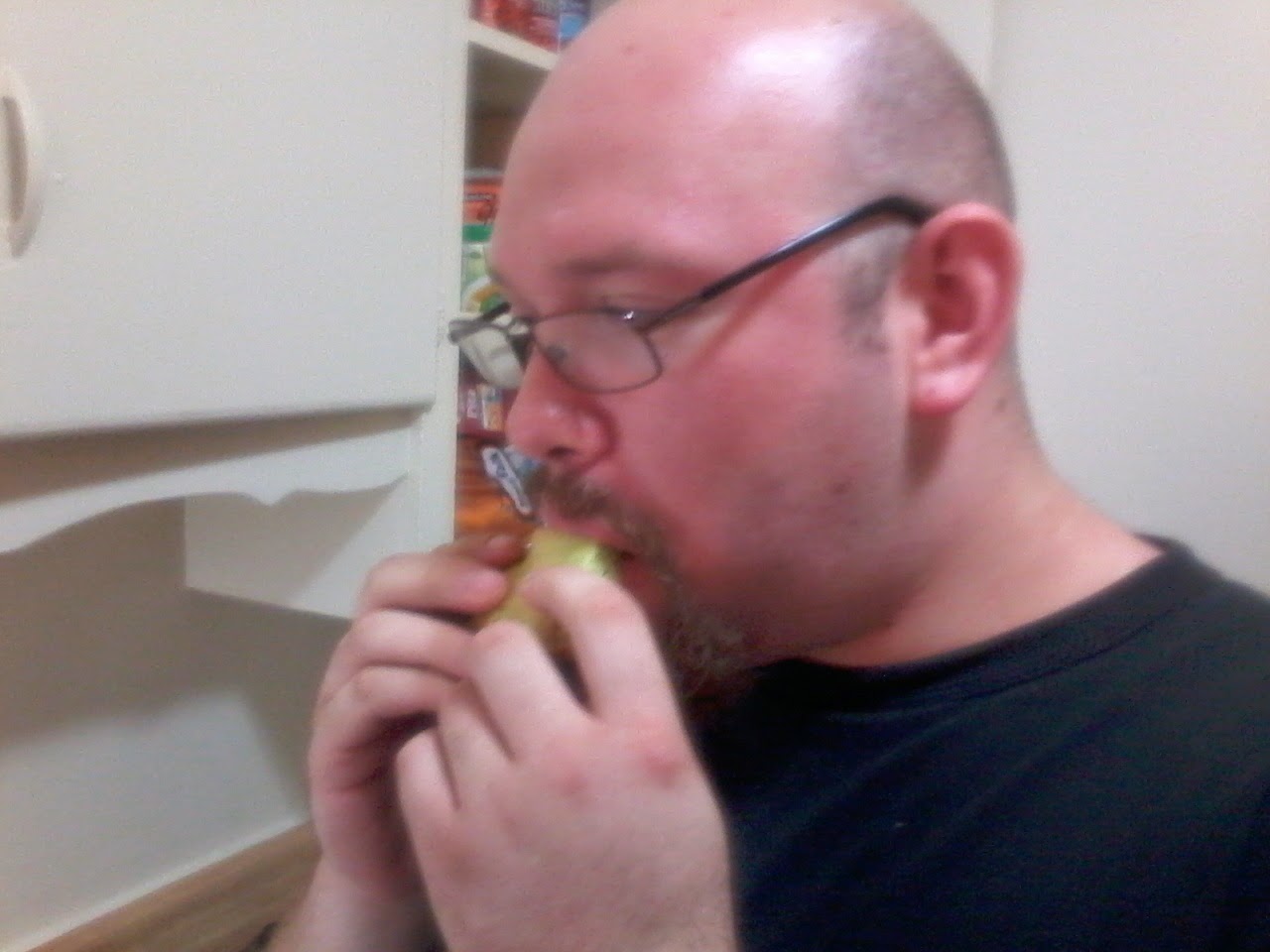 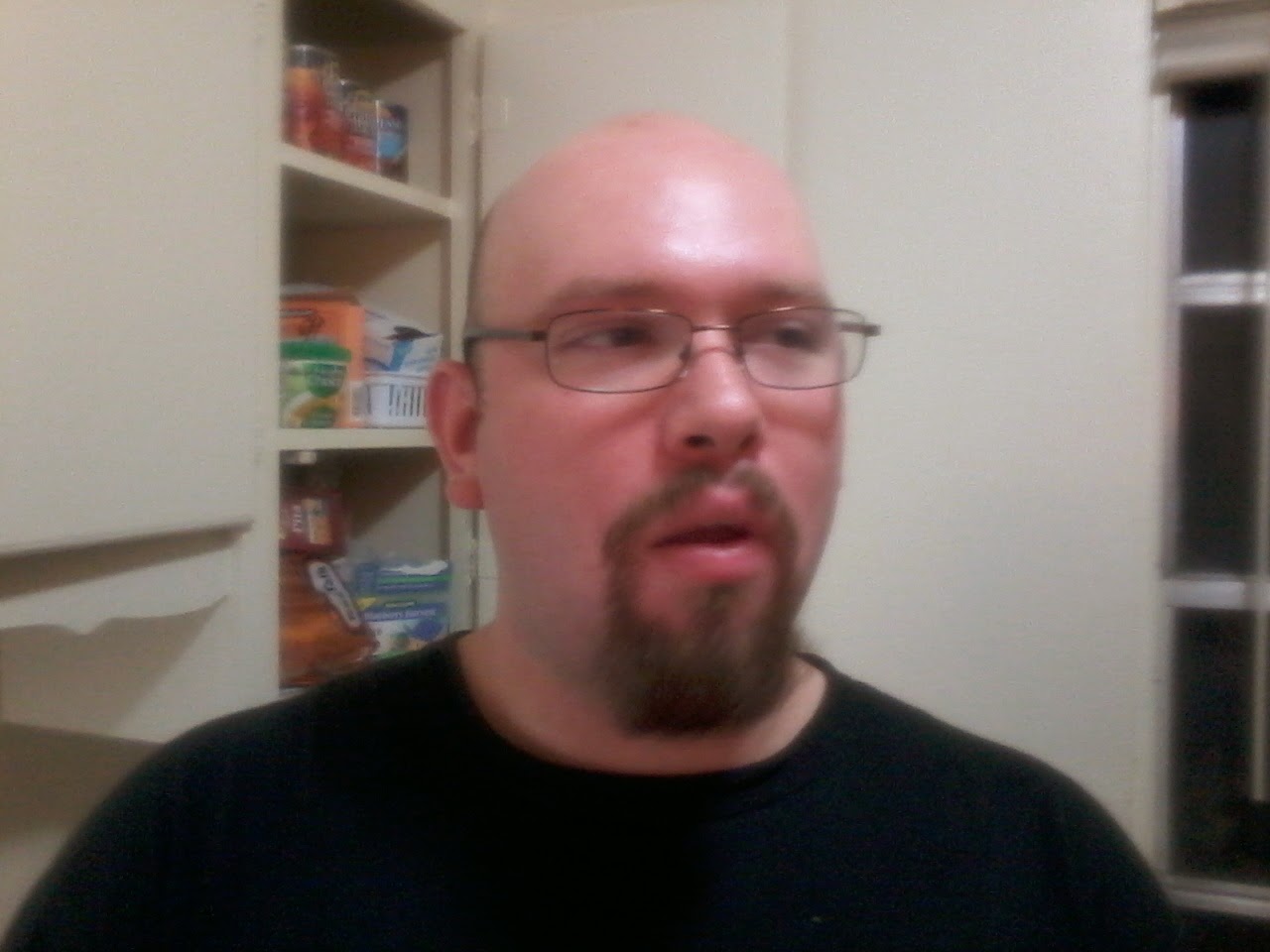 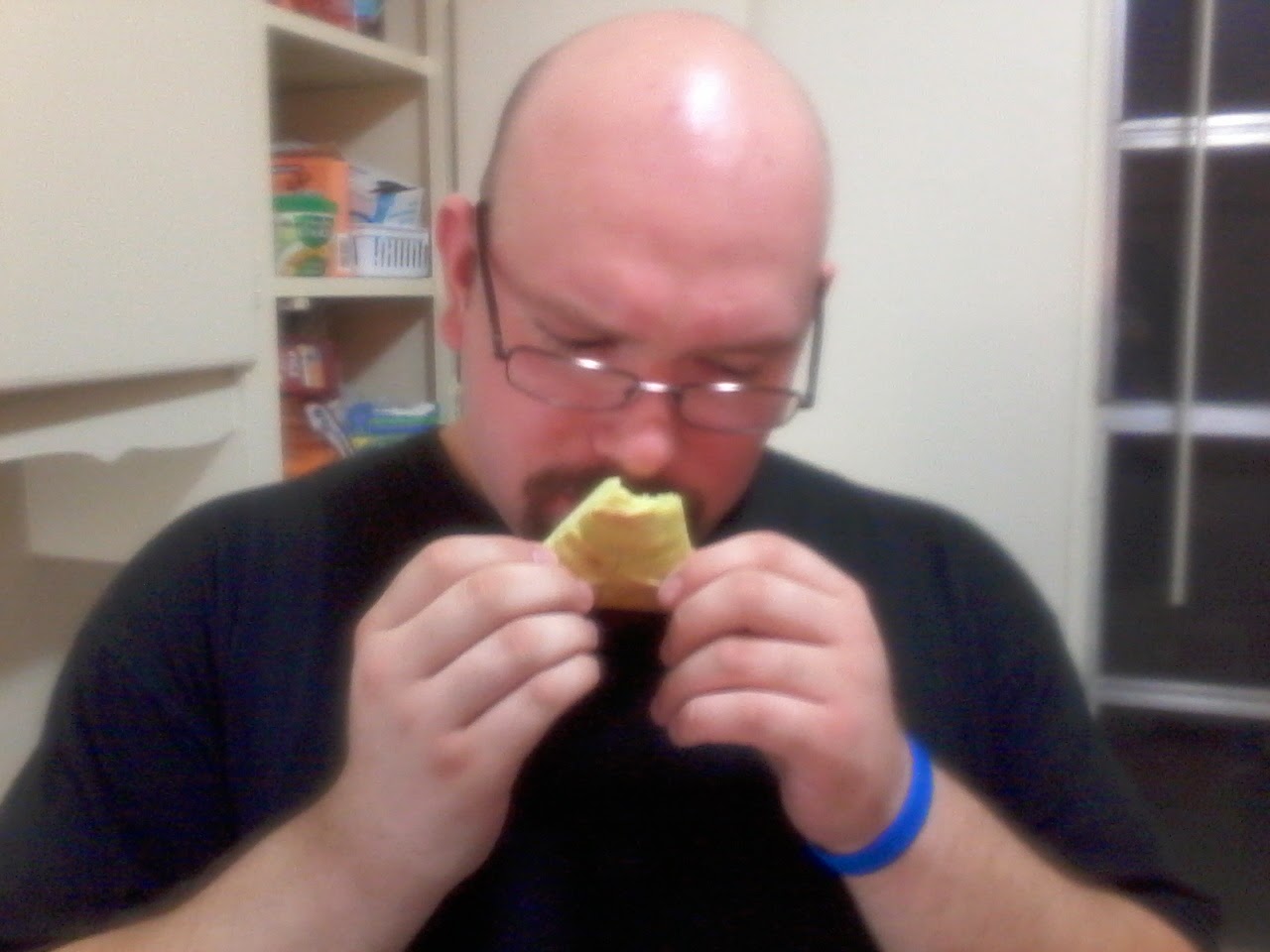 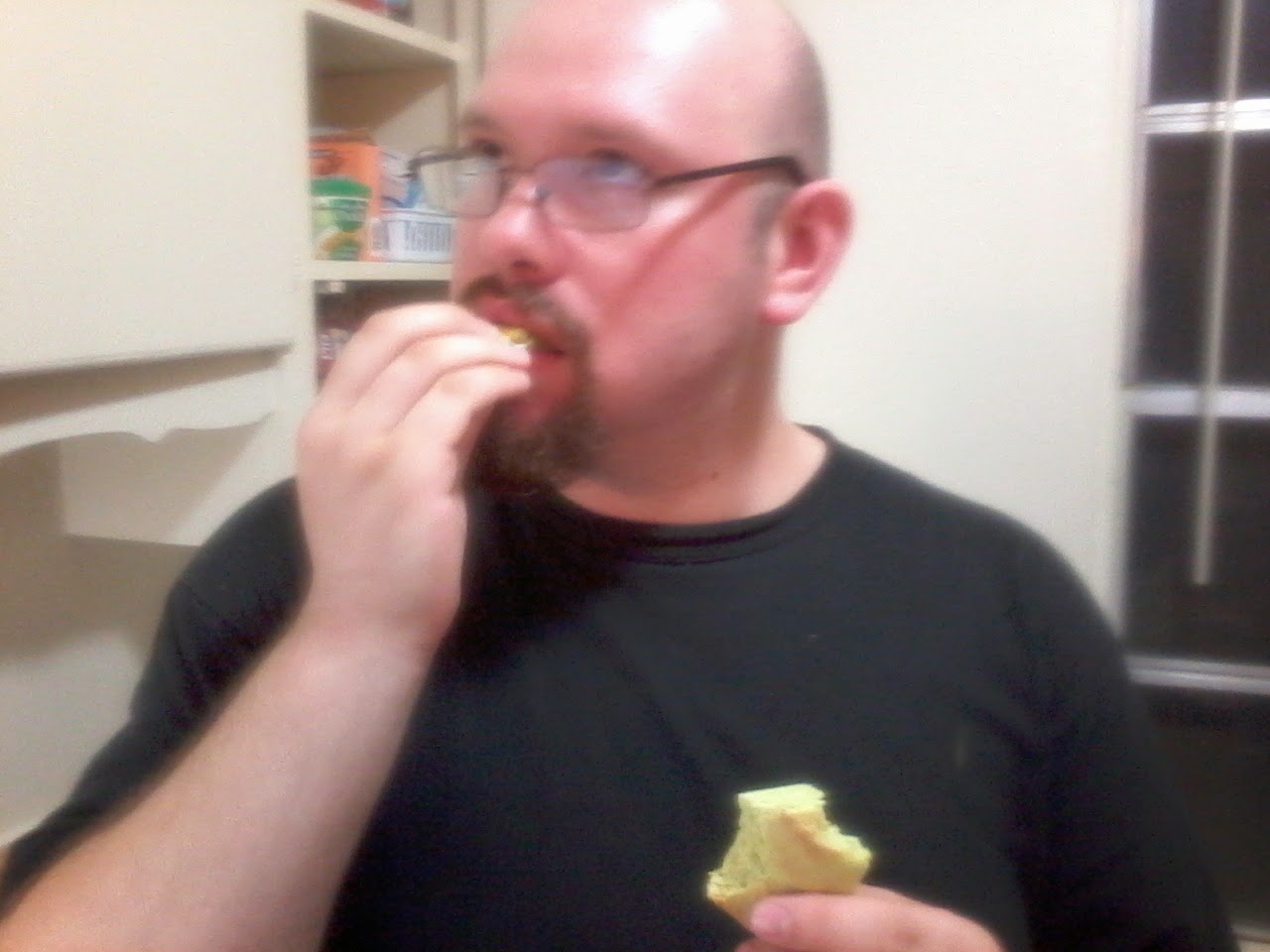 I'd like to show you the exact moment I knew something was very wrong.
I had actually hoped this would be good since in its own way, the batter was really tasty. But then I tried a slice and it turns out cooking an avocado makes it taste simultaneously bland, strange, and not right.
And Marcus was right- we couldn't stop eating it. Despite being really bad, it was just so weird you had to have more just to confirm it was as weird as you thought it was. I think this sums up diet food in general. We ate more than half this.
As kitchen scares go, this one was relatively benign. I'm relieved, but actually more disappointed. More to follow...
Posted by S. S. at 12:50 AM