I don't know who Elizabeth was, but she made delicious rolls

I've mentioned this before, but I really love digging out recipes from obscure sources and making them. With that in mind, today we are pleased to present a recipe handwritten in a copy of a 1928 local women's club cookbook now held in a university library's special collections!
This is how I make them; it's pieced together from what instuctions are there and some other recipes I've made. Ever since I first tried it (mainly because I was curious what mashed potatoes were doing in an otherwise ordinary bread recipe), I liked them so much that it's one of my default recipes.


Usually, handwritten recipes like this are some of the best you'll find- after all, someone had eat something and like it enough to ask to write it out.
The instructions are relatively clear for a handwritten recipe though I still had to guess a lot. A lot of the time, people write just enough to jog their memory; to complete strangers reading them 80 years later, they come off as cryptic notes.


It may sound weird, but I felt like someone was really glad to see her recipe being brought out and served to others. It's just like when I cook my great-grandmother's Mexican food- It feels like she's there and really glad to see we're still making it.

All right, I'll stop being sappy now.
A lot of older recipes call for cakes rather than envelopes of yeast, which no one seems to sell anywhere these days. I was therefore very surprised to see one just randomly sitting in the refrigerator. Where did it come from? Who uses yeast cakes these days? Does Elizabeth think packet yeast isn't good enough?
If you go back to recipes older than this, you'll find that apparently the idea of selling yeast specifically for breadmaking is relatively new. It's a bit surprising since, you know, bread's about as old as civilization. A lot of older recipes will say to get yeast from your local brewery.


I did say that the instructions are clear for a handwritten recipe- there's still a lot left out. The first time I made these, I dumped all the flour in at once and get big lumps that no amount of stirring would break up.
However, the recipe's not ruined if you made this mistake. You're just going to have to get out a blender.
Similarly, if you dump in all the milk at once you'll have to get out a blender again. (It occurs to me that I could have just put it all in the blender to begin with, but until very recently using a blender involved 30 minutes of tracking someone down who could lend me one.) If you're doing it all by hand, you'll want to add in just enough flour for the potatoes to absorb it, and when it's thoroughly mixed in add a little more. The same goes for adding the milk and egg whites.


The way it says to add the foamy stuff to the flour is unclear, but I figured so far, aside from putting in mashed potatoes, it looks like really old bread recipes where you do what's called "setting a sponge." So that's what I did. 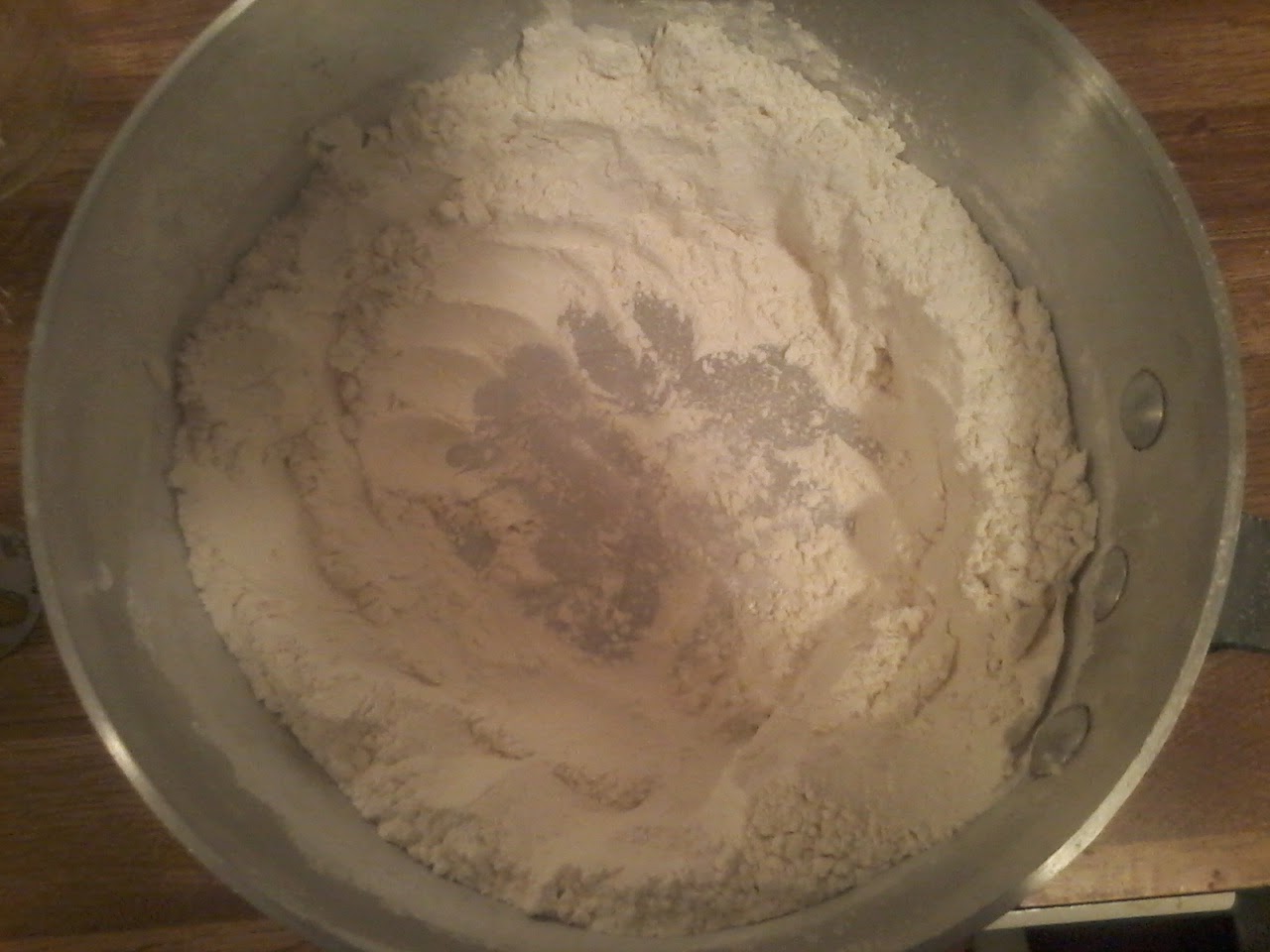 Out of curiosity, I pinched off some of the dough and tried it. It tasted like a cheap knockoff of those Hawaiian rolls, but I figured I already had the it mixed up anyway so I may as well finish it. I've never had a recipe say to refrigerate for a few hours, but there must be some point to do it, otherwise Elizabeth wouldn't have said to do it. It turns out giving the yeast a few hours or so to turn the sugar into-- er, whatever yeast turns sugar into-- makes it taste so much better. The dough rose a little bit- you can see it made its way up to that ring of dough around the bowl- and had that special homemade bread taste to it that makes you want to ask for the recipe so you can make these yourself.
So, thinking this may be worth it after all, I set it to rise again.


I know handwritten recipes tend to leave the obvious stuff out, but no one mentioned kneading so I didn't. I just plopped it around some flour I'd spread out onto the counter and got the dough blob thoroughly coated.


Some of them may have gotten a bit squished out of shape getting to the pan, but I think people who get fussy about that don't want to eat rolls. 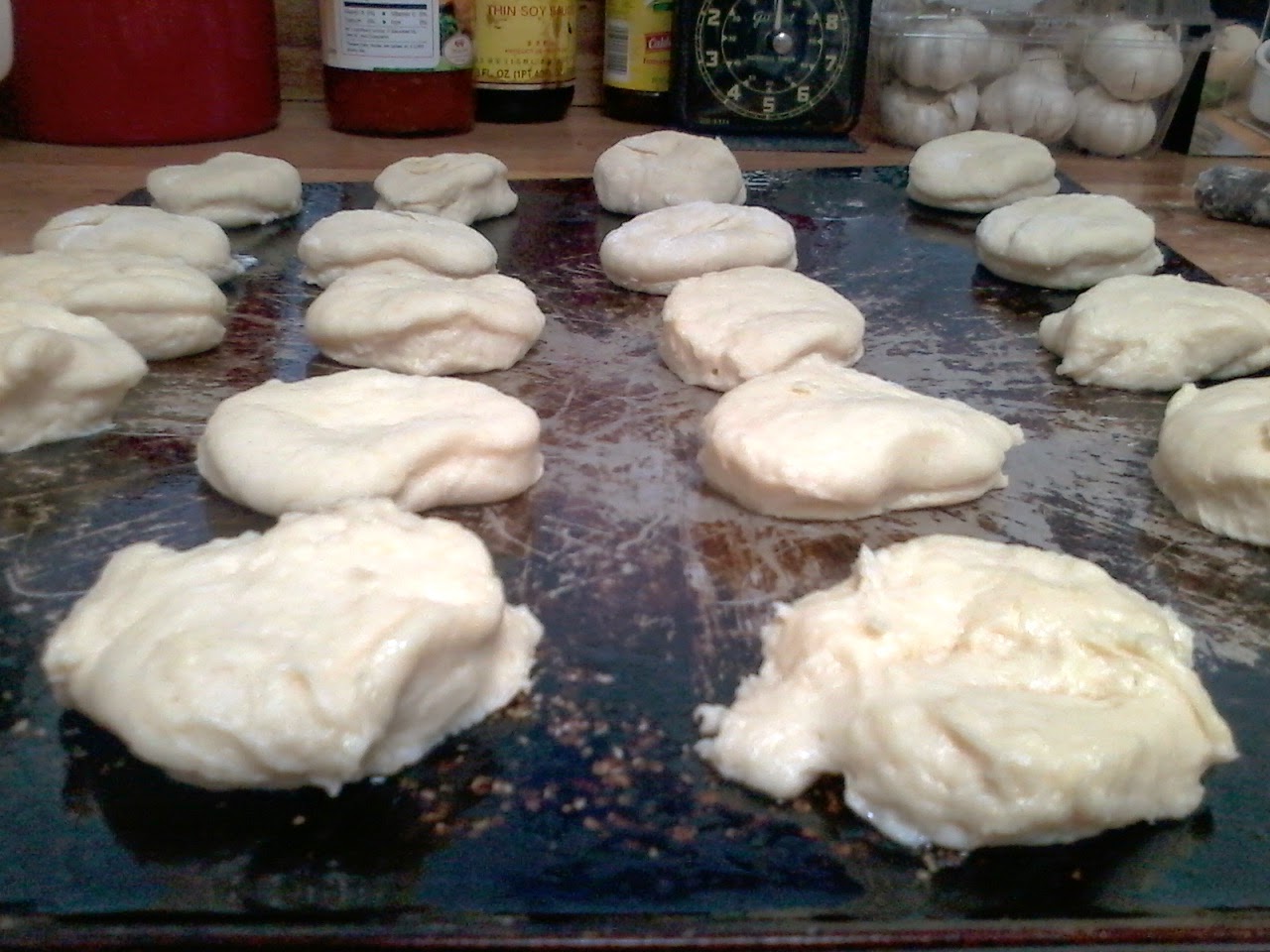 One of the nice things about making things like this is you can eat some rolls from the first batch while waiting for the second to rise.
I always think it's funny that your dough gets smaller and smaller as you keep rerolling and cutting, leading to this:
And, excluding the ones that people wandering through the kitchen grabbed before I got the second pan out of the oven, this is how many you get:
So, the recipe's one someone really wanted at some point, but on the other hand she also wanted to know how to make liver and bacon. Therefore how good are these?
The first time I made them, so many people wandered into the kitchen and grabbed one there were hardly any left. Then I brought them home for Easter and my brother took them all when he left. This time, only four were left the next morning. Enough people liked them that a couple Christmases ago I made a few to give away.

Therefore, I totally recommend making these!