Since I'm still kitchenless, A Book of Cookrye is now a mobile cooking blog! Yes, more and more of my friends have found our visits seem to involve making stuff. Today, Marcus just moved and hasn't actually baked in his new apartment's oven! When he turned it on, it made unnerving smells. He naturally decided that meant he shouldn't use it until it's gotten looked over. I said the people they hired to clean out the apartment probably used Comet on the inside and it's just burning off and ignored whatever risks I was running by baking in it. So, starting with some unnerving fumes, we're inaugurating an oven! *FANFARE* And on this occasion, we've got reaction shots of both of us as we taste the results!
We were trying to take one of those pictures of me standing next to the stove looking like those ladies in old kitchen ads. You know, the ones where they look so excited about an oven you'd think the store gave away a free vibrator with it. I failed at looking that excited about an electric stove, so here's a picture of me trying to rev up a really big fake smile. 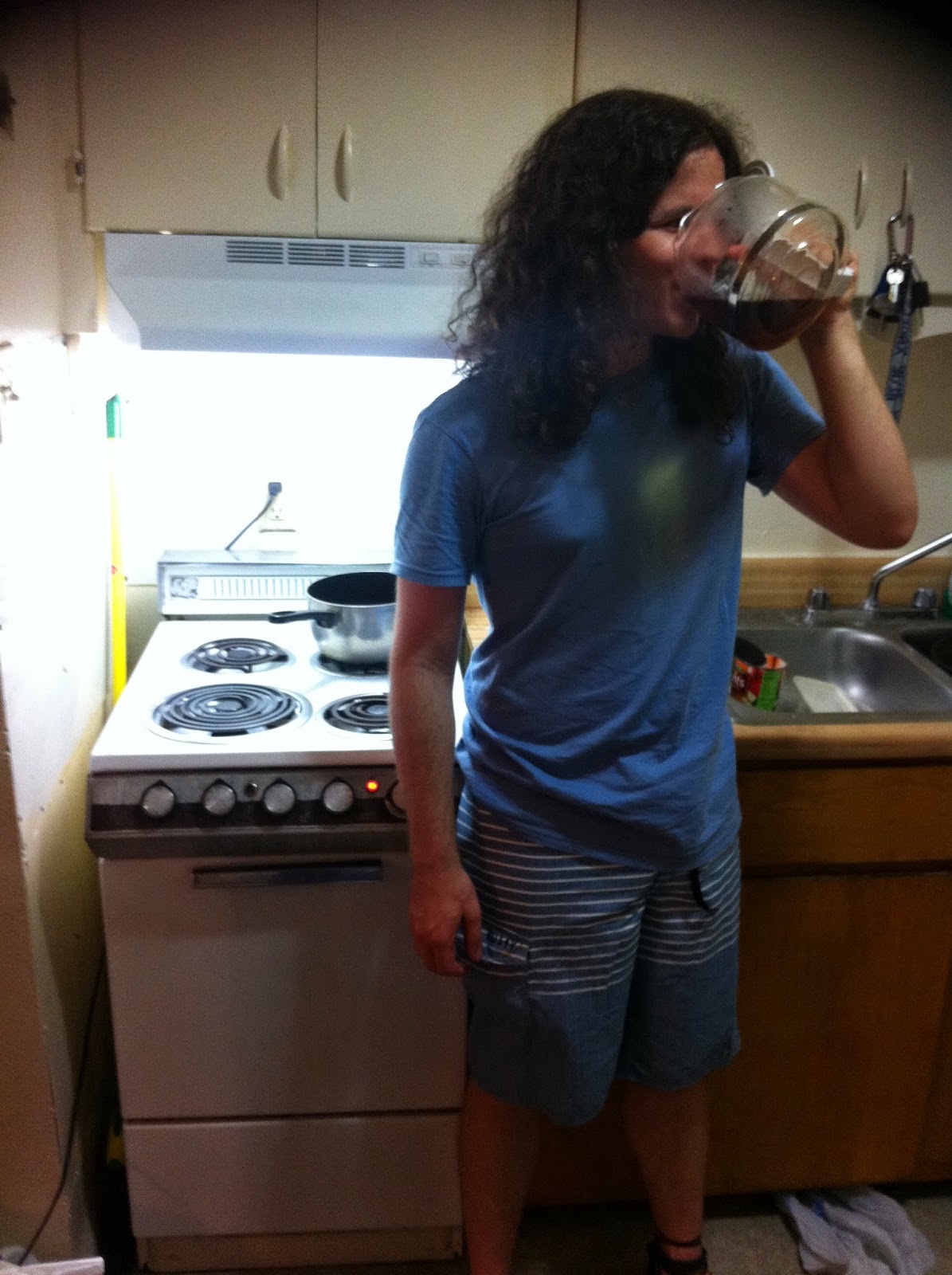 We decided to make something from the same cookpamphlet at the angel food cake because the recipe sounded really good.

Yes. It's cinnamon rolls baked in the sort of brown sugar-butter sludge you'd put in the pan to make a pineapple upside-down cake. We could not wait. So here's how we did it:


Also, Marcus gets credit for every photograph he's not actually in, and for using his phone since I forgot mine (what, you think I can afford a digital camera?). He's a bit more enthusiastic of a blog photographer than I am. For example, he wanted a shot of the ingredients, so he took one.
Despite this pamphlet being for an electric mixer, neither of us have one. Well, I actually do have one, but I didn't think to bring it and he doesn't. We're going to have to have at it by hand. Also, we're skipping busting out a sifter because that would involve buying one.
A lot of people use a pastry blender to cut the butter into the flour, but I haven't got one. Even when I could use my mother's, I found it a lot easier to use my hands anyway. Also, I'm assuming that where the recipe instructions say shortening, they meant the butter listed in the ingredients.

Honestly, I really do think this is the easiest way to mix butter/shortening and flour. I don't see how a mixer would have made it any easier- I'd just have had a massive dust-cloud of flour blow up in my face. 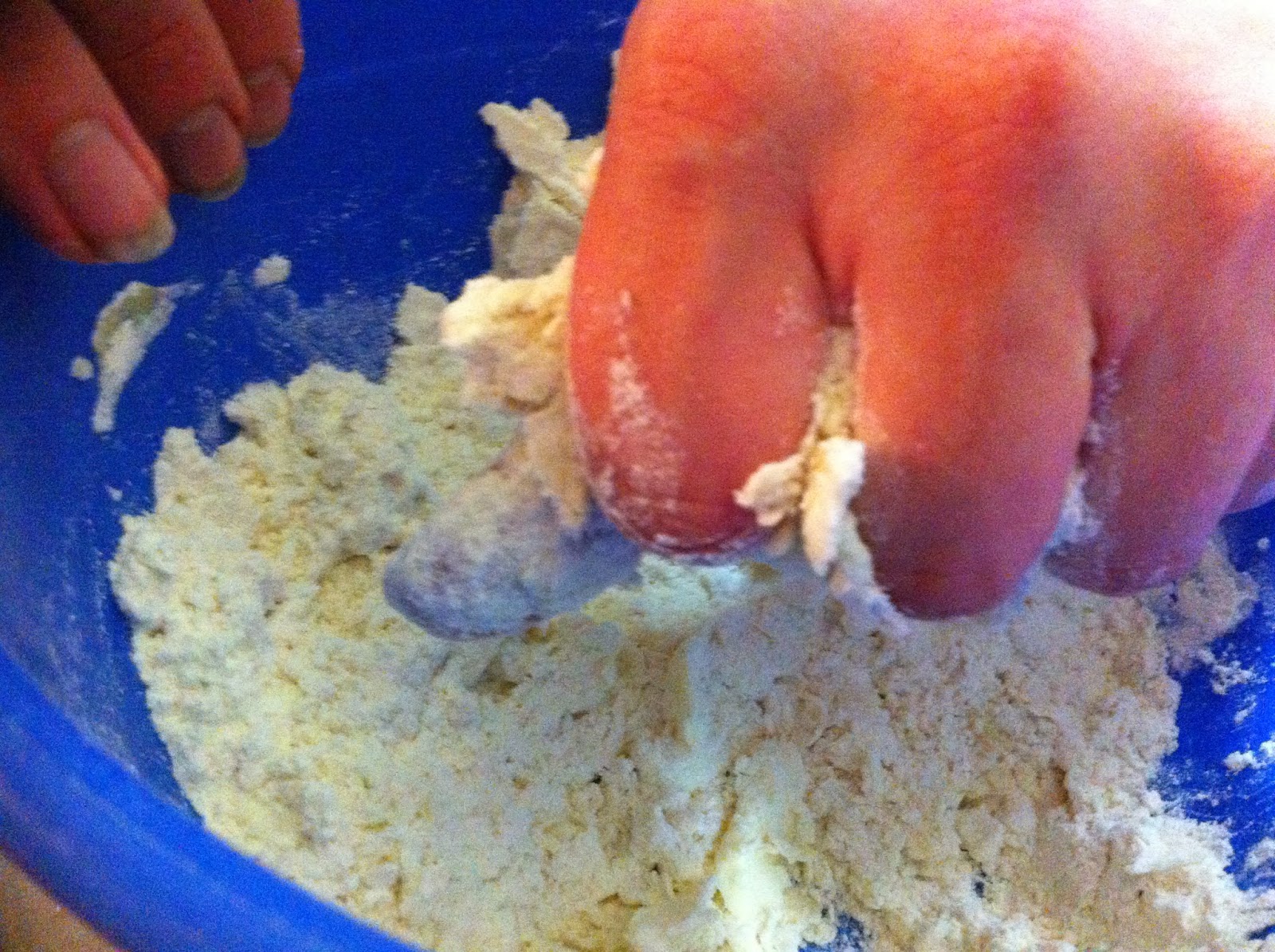 And just like the recipe says, it resembles a coarse meal. 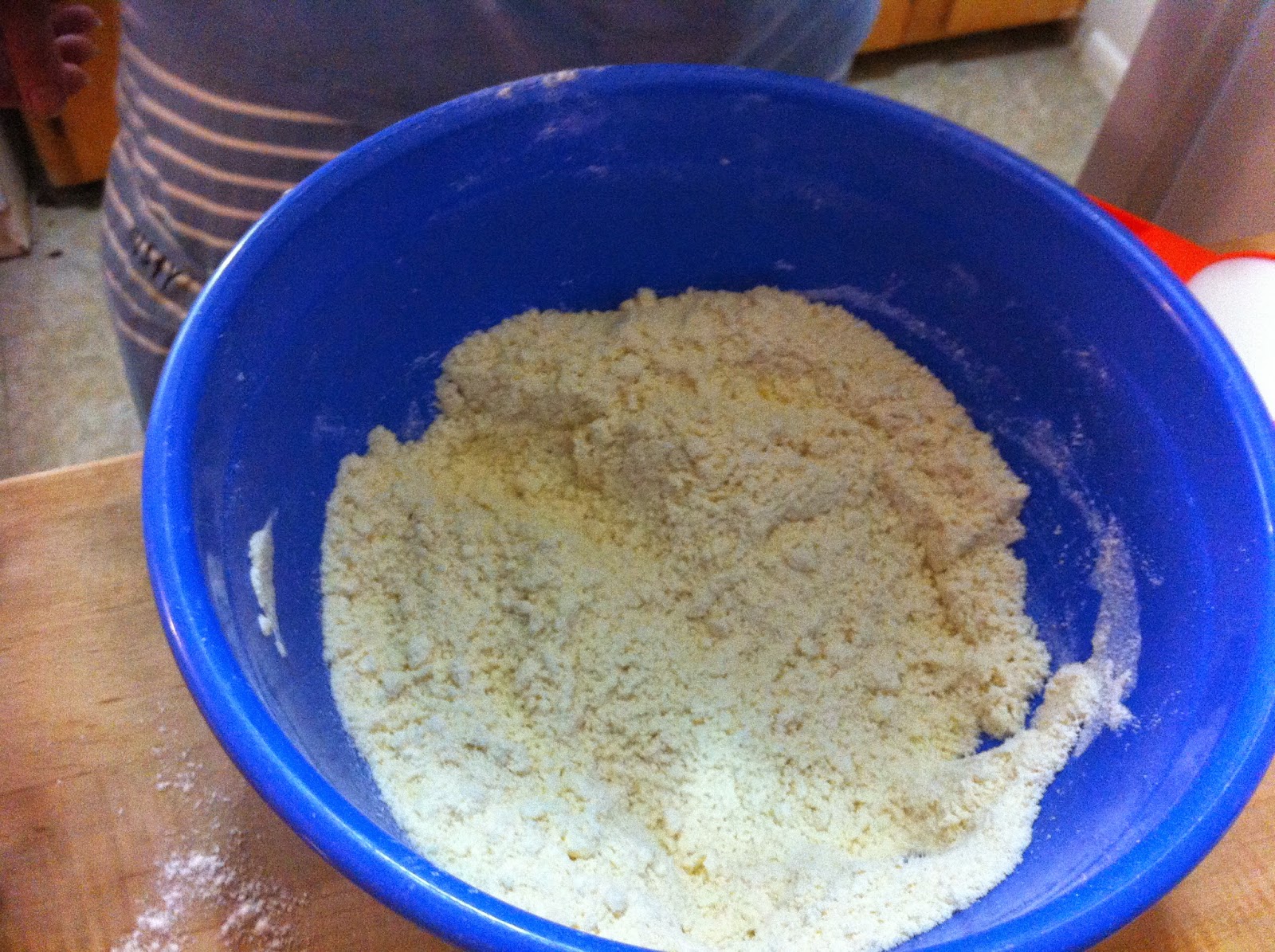 So, we dump in the milk, and I began to think I should have gotten the bread flour instead of just all-purpose because this showed no sign of getting thick enough to knead. It was this sticky goop that showed no signs of firming up. 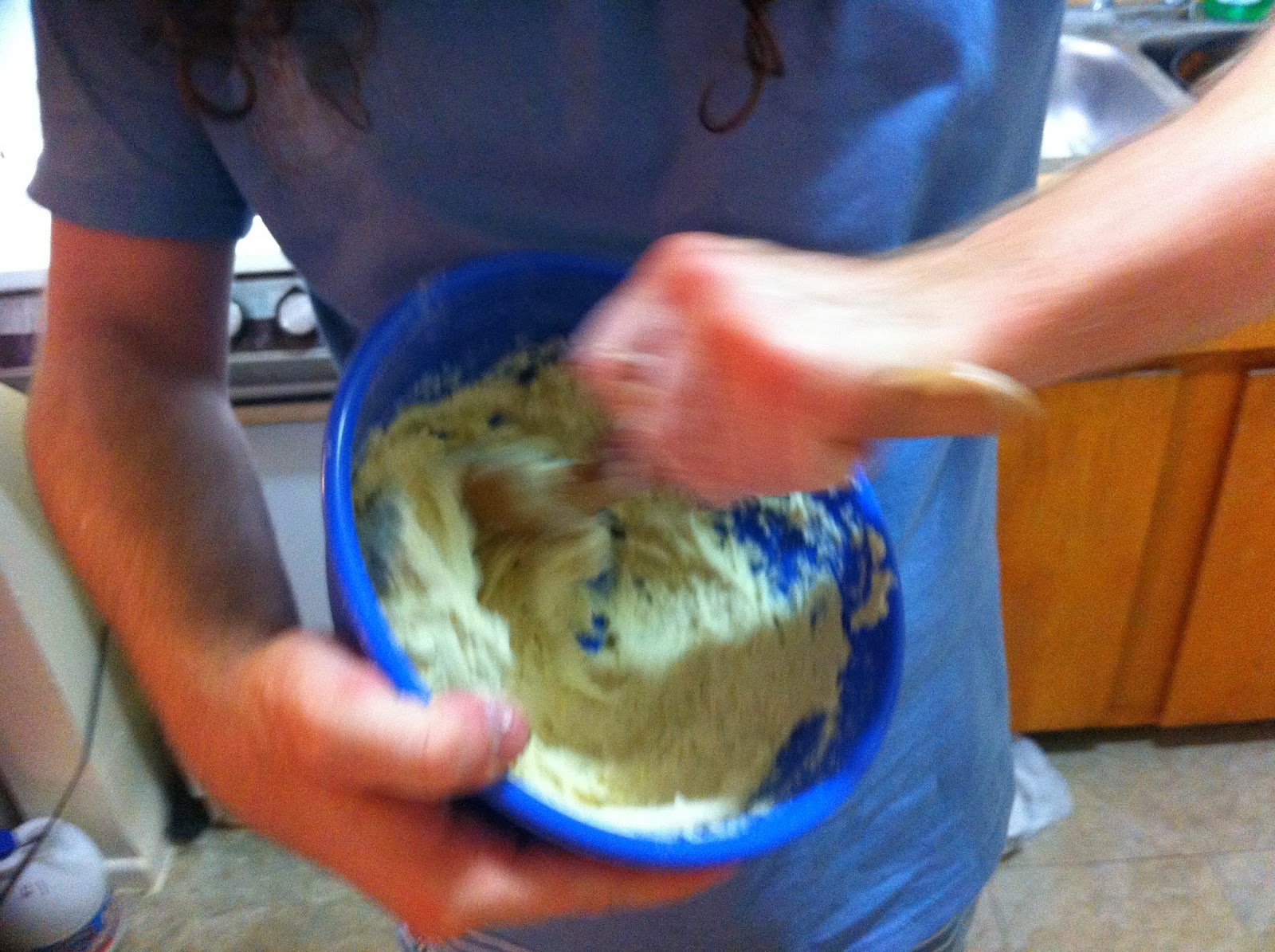 But I figured I'd just keep stirring it and hope something happened, and it did! 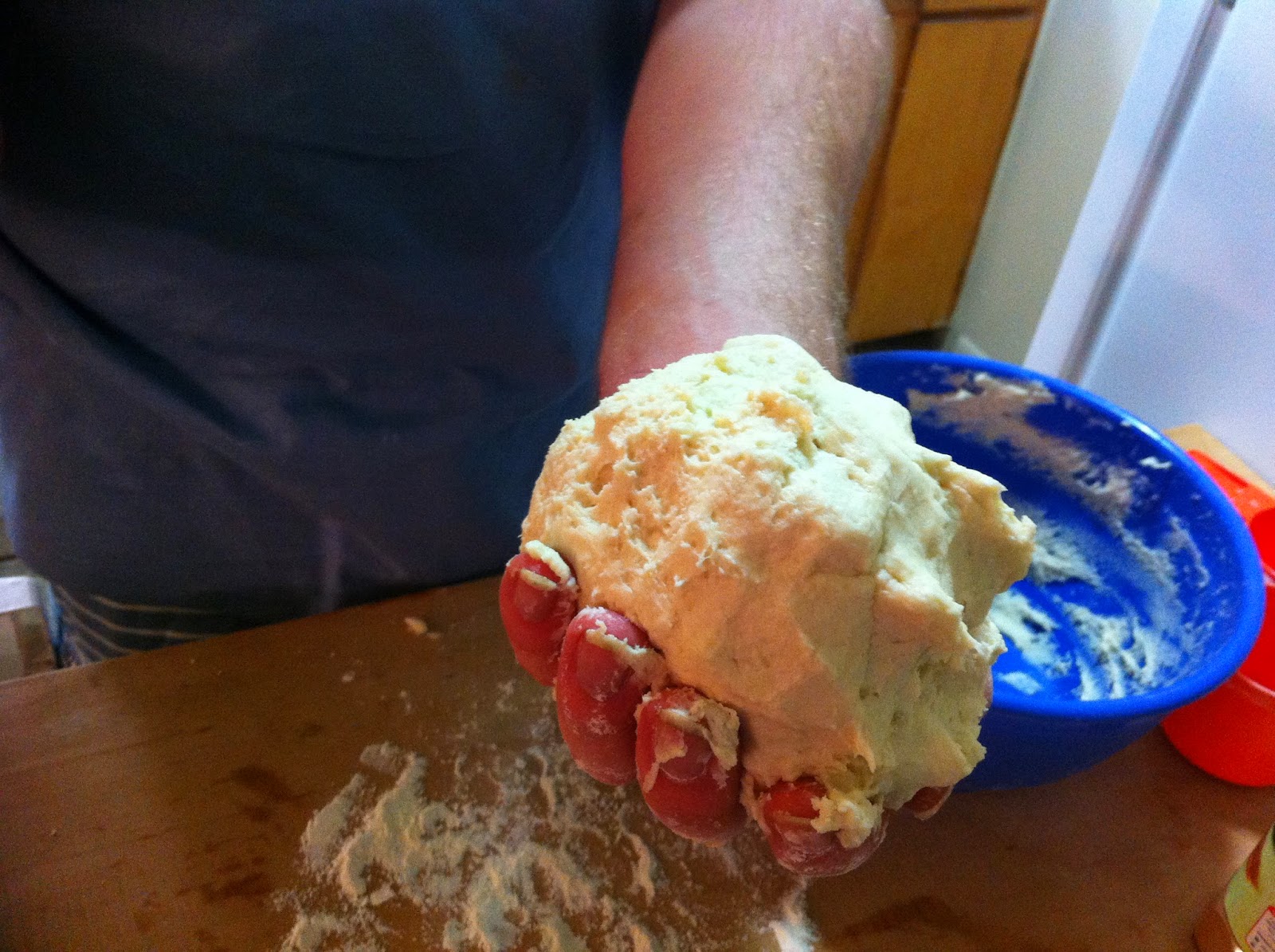 So it's time to knead this dough ball. Then it occurred to me: I've never kneaded baking-powder bread before. Who does that (besides the folks at Dormeyer)? 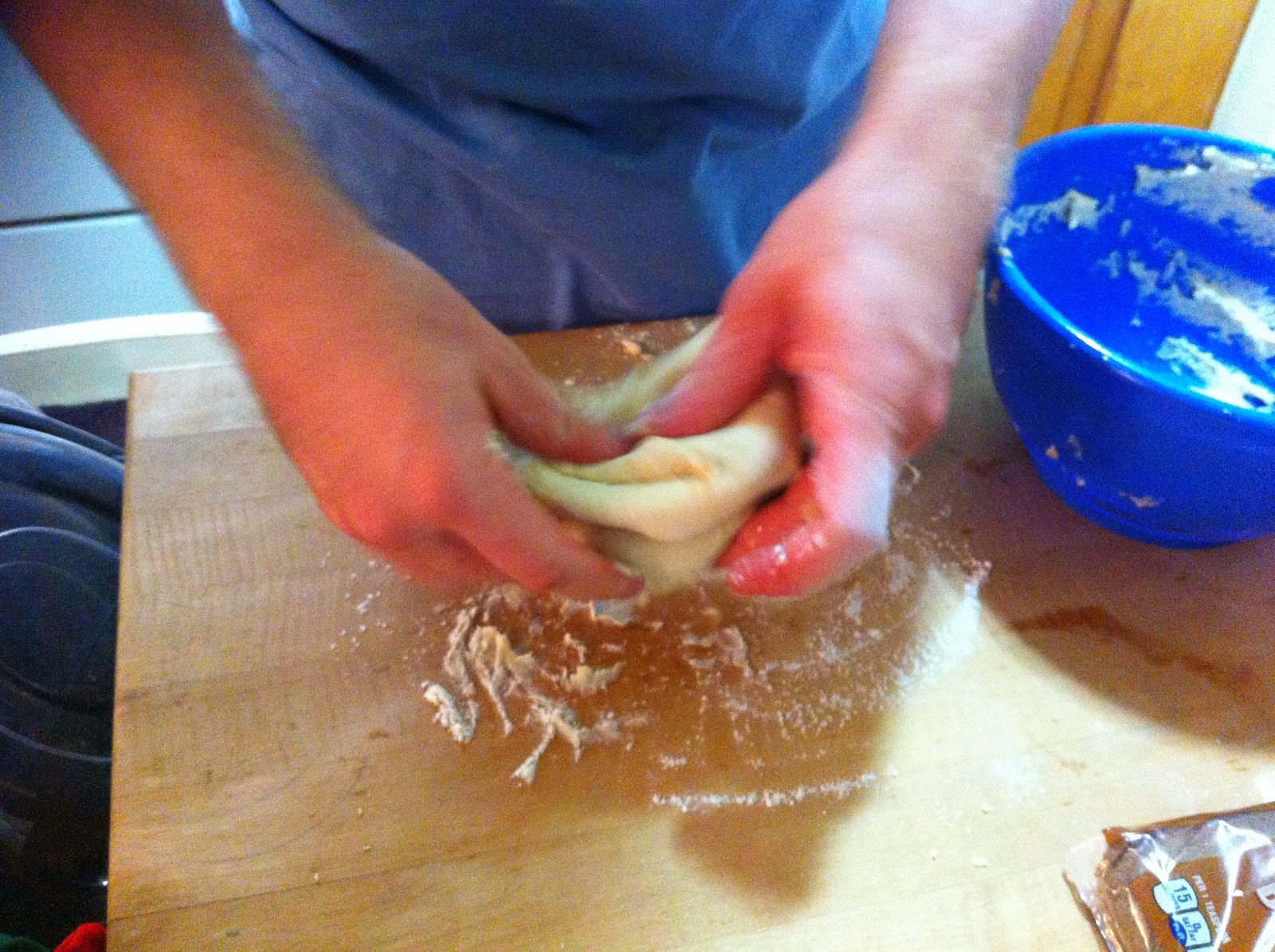 It did make a difference. We went from having a dough wad to a smoother dough ball. 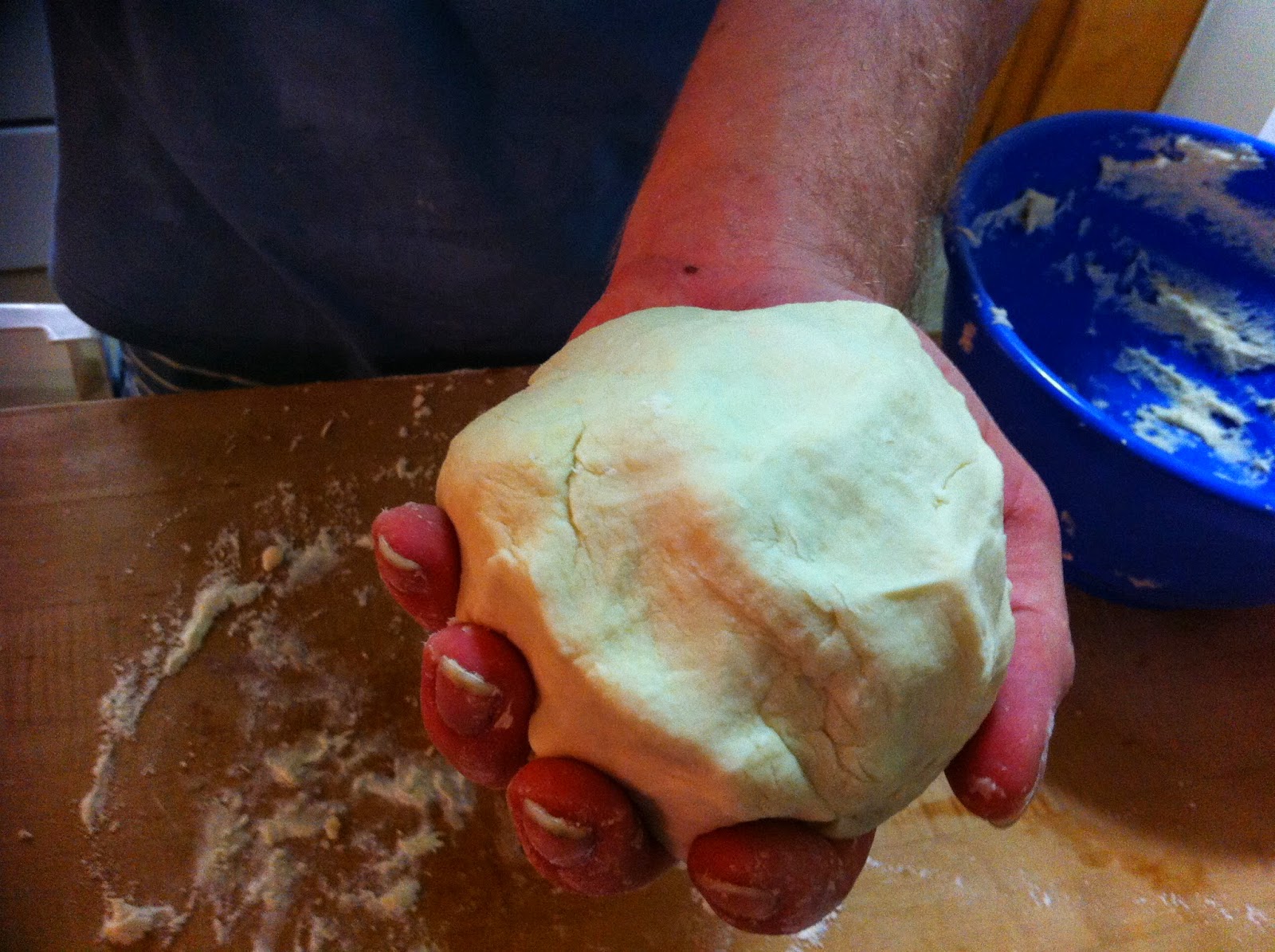 To my surprise, the recipe got a lot less detailed once it got to shaping the dough into cinnamon rolls. Usually, promotional recipes are written out really explicitly since the housewife they're advertising at is a stupid woman who must be reminded that you have to drain your spaghetti after it's cooked. You'd think they'd have said to roll it into a rectangle instead of just saying how thick it ought to be. 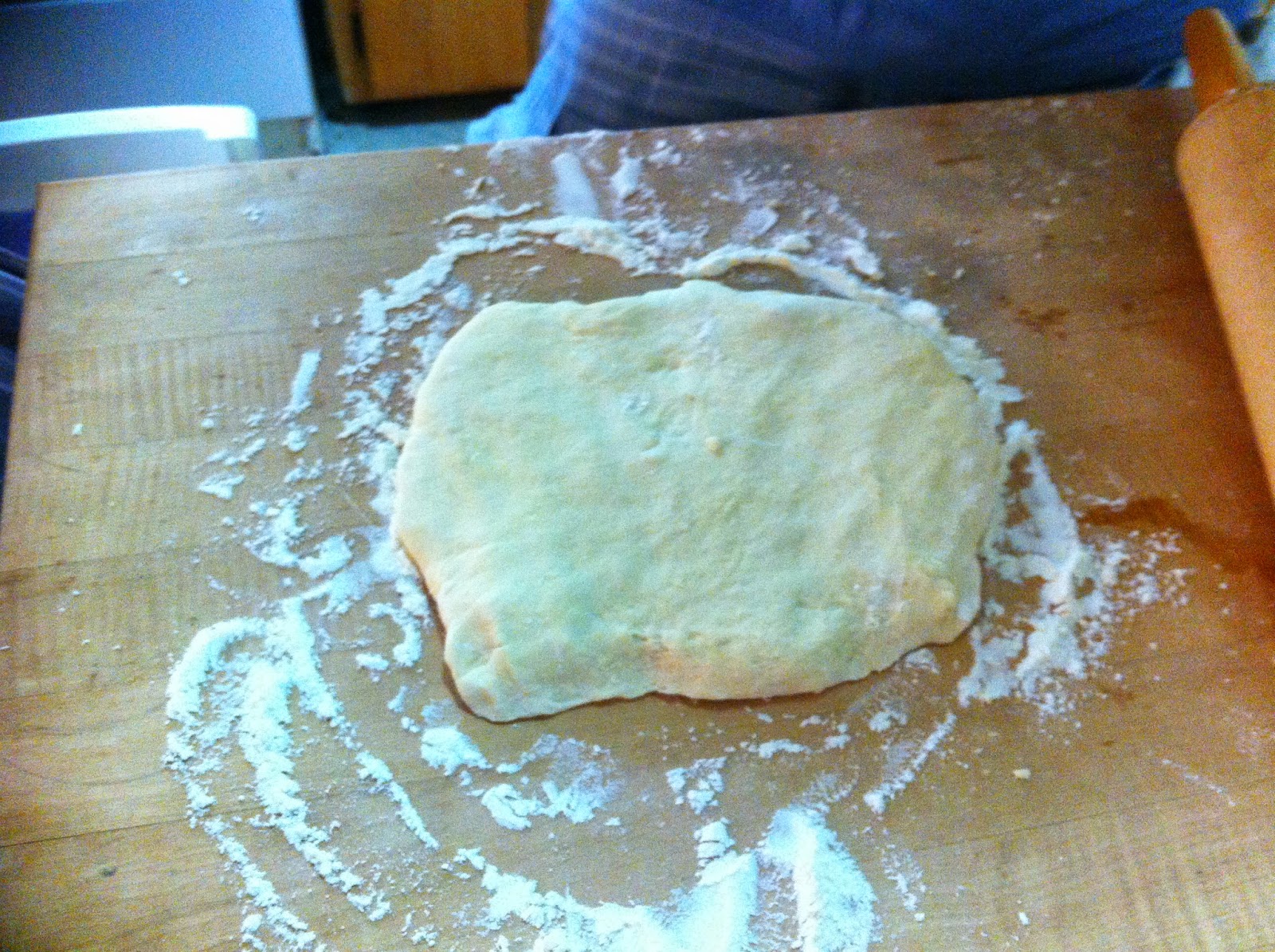 Wait a minute. This is all the caramel roll I'm going to get? The recipe says to slice this into twenty pieces! Do you see the size of my hand on that dough sheet? 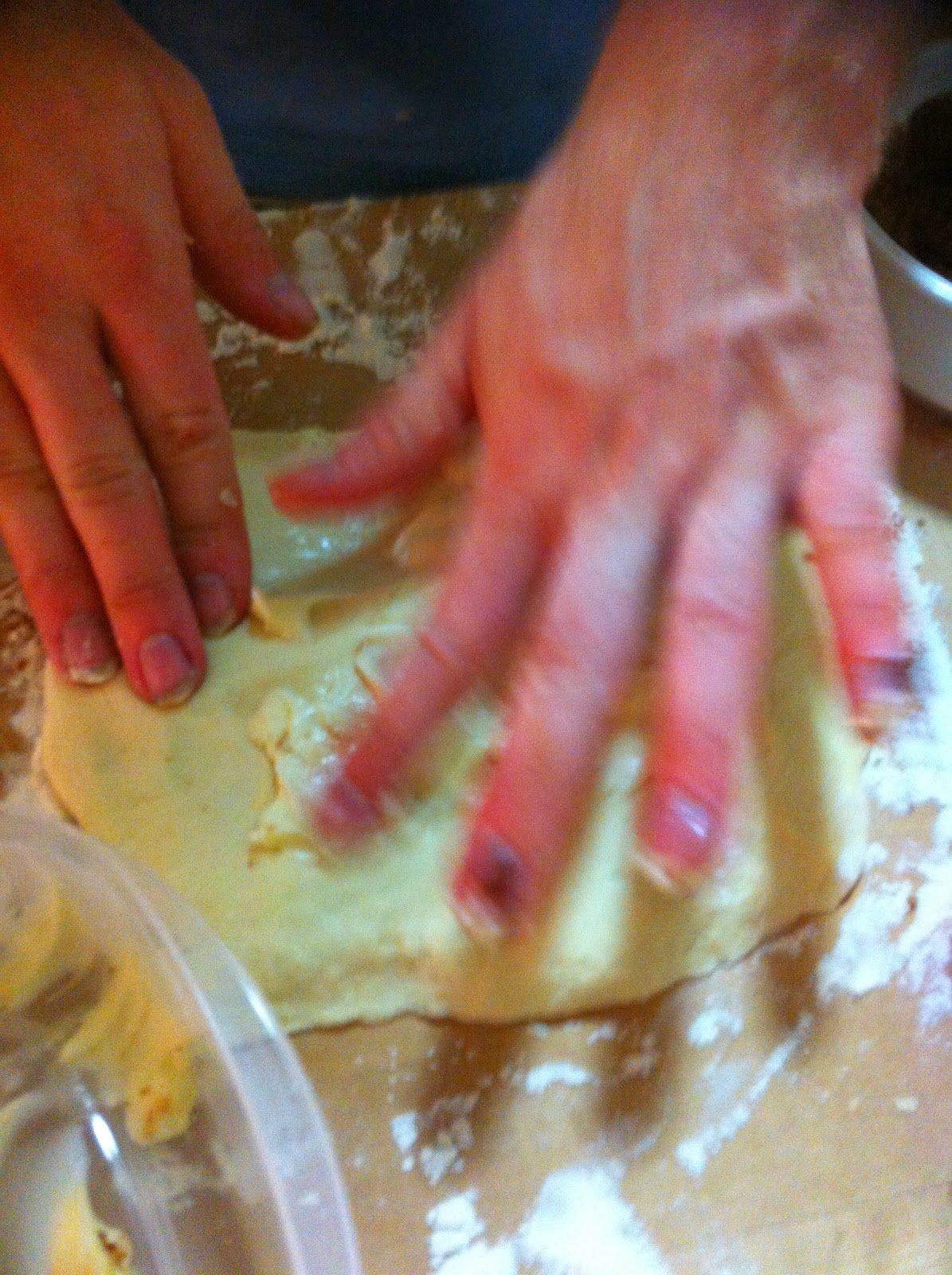 Also, couldn't they have put the butter I'm spreading on the ingredients list? And they never mention how you're supposed to leave about half an inch of dough uncovered on the long edge so you can close up the scroll. 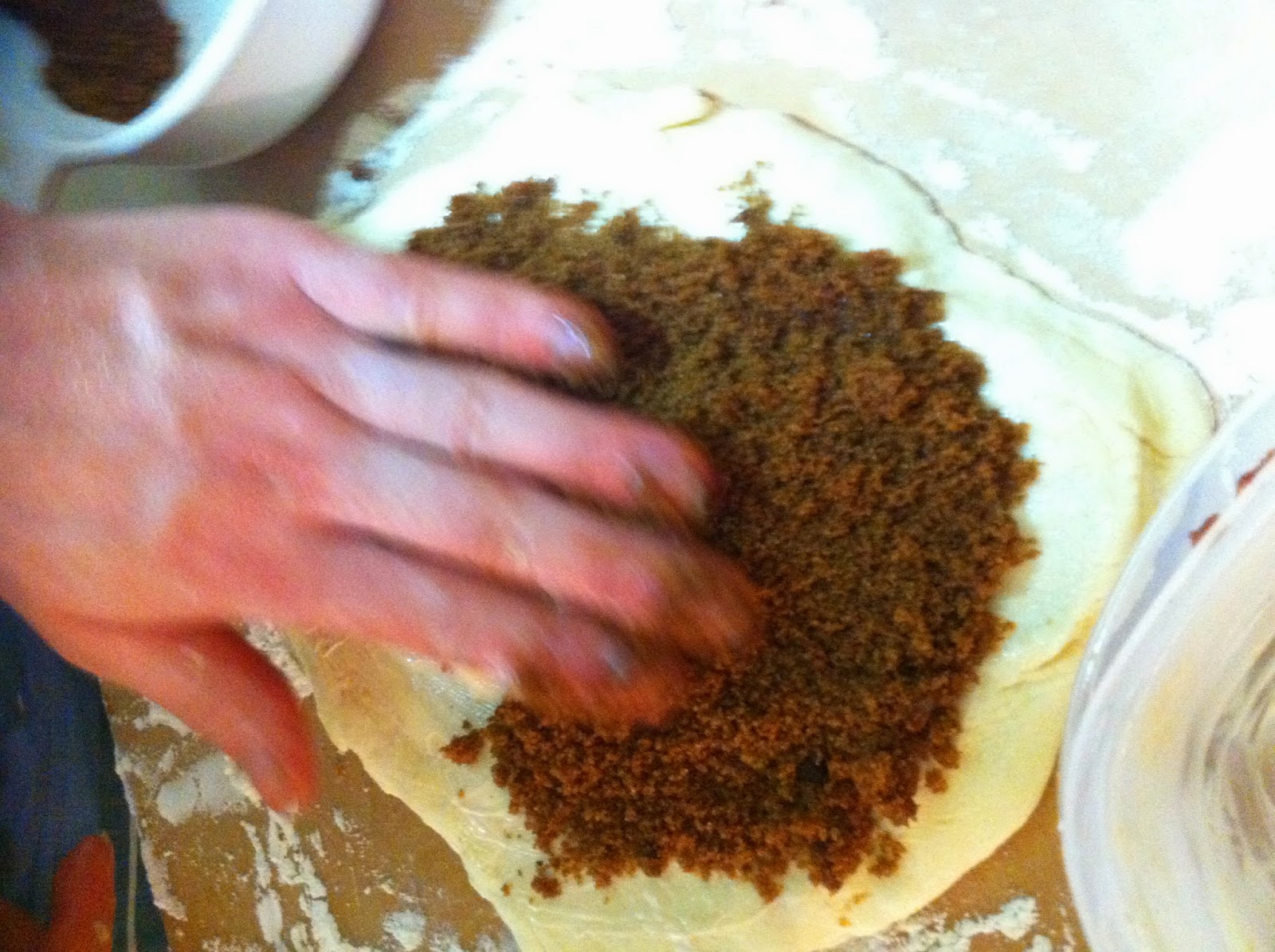 Whatever. Let's roll this sucker up. We figured even if we don't get 20 of them, however many we do get would be as delicious as cinnamon rolls baked in brown sugar and butter would be. And even if they weren't, they'd be like pizza. 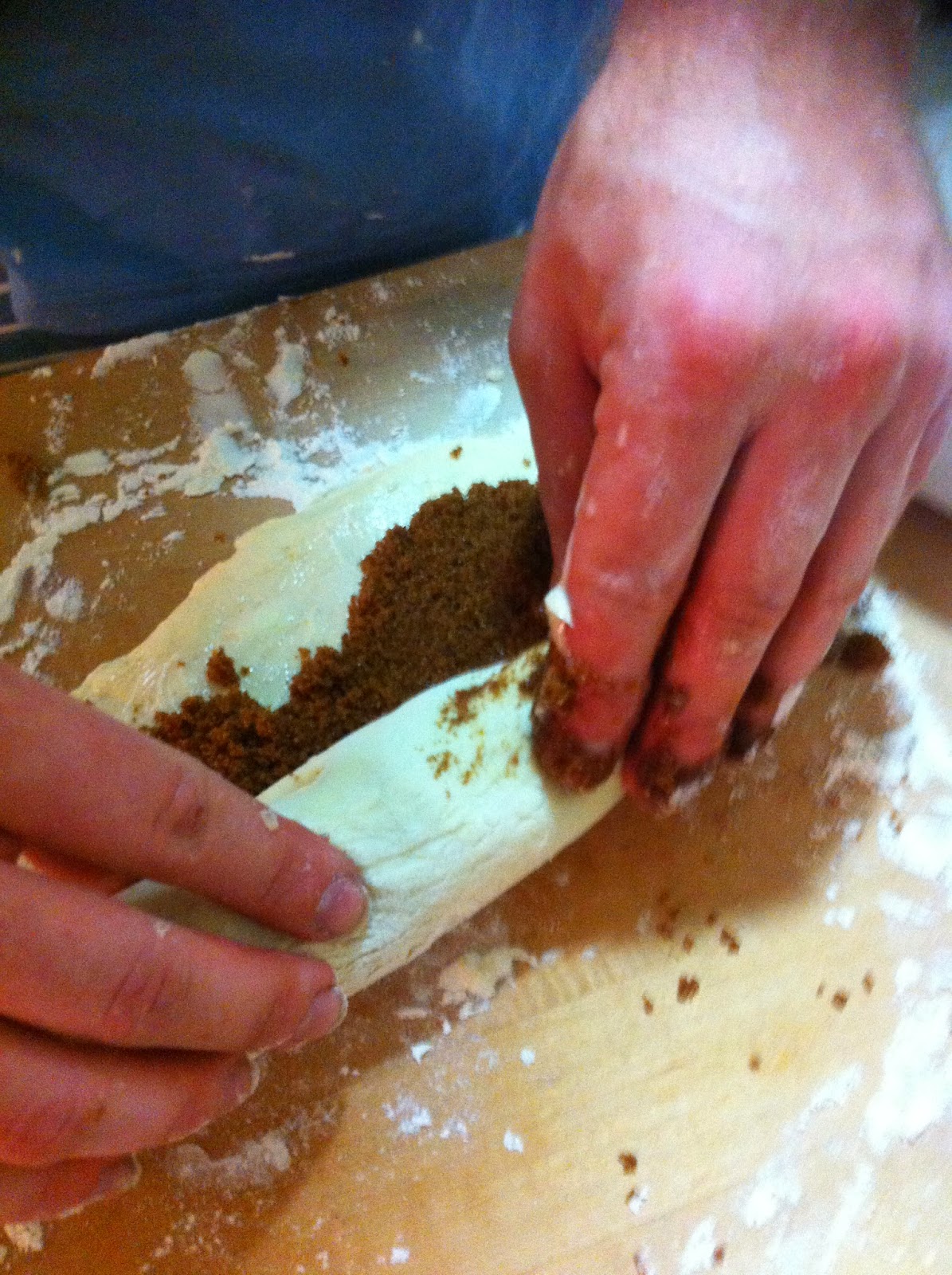 Behold! We have arrived at the point where we're supposed to make it stay closed! Did the recipe mention that we may be wetting the dough with milk so it sticks shut? 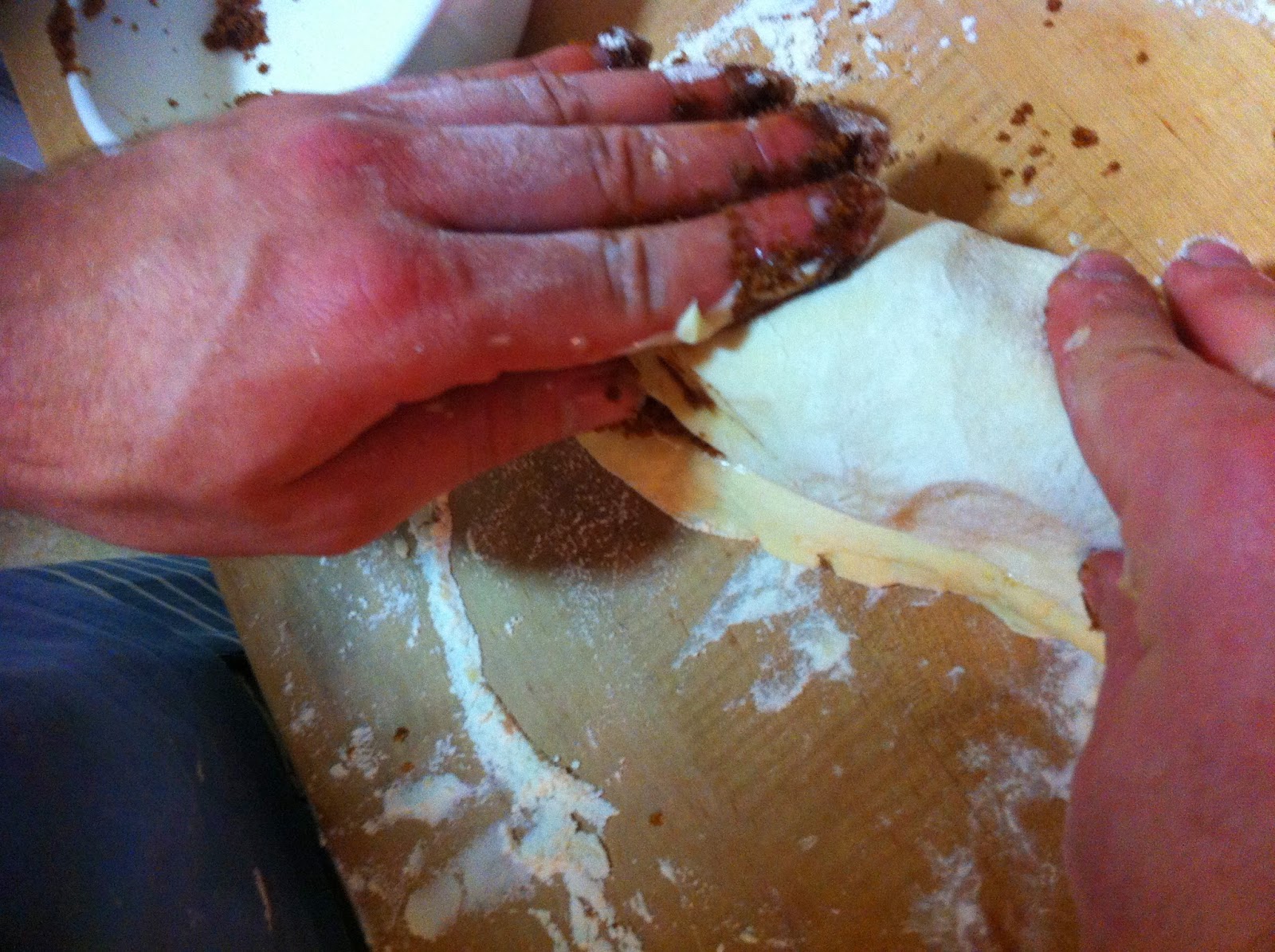 No, nor did they put the brown sugar and butter I'm about to melt in the ingredients list.
Now that we've got pan full of delicious... this,

it's time to return to the slice the rolls! As you can see, for some reason they get squished flat when I slice them no matte what I do. I ended up pinching them at the sides to bring them back to round-ish. 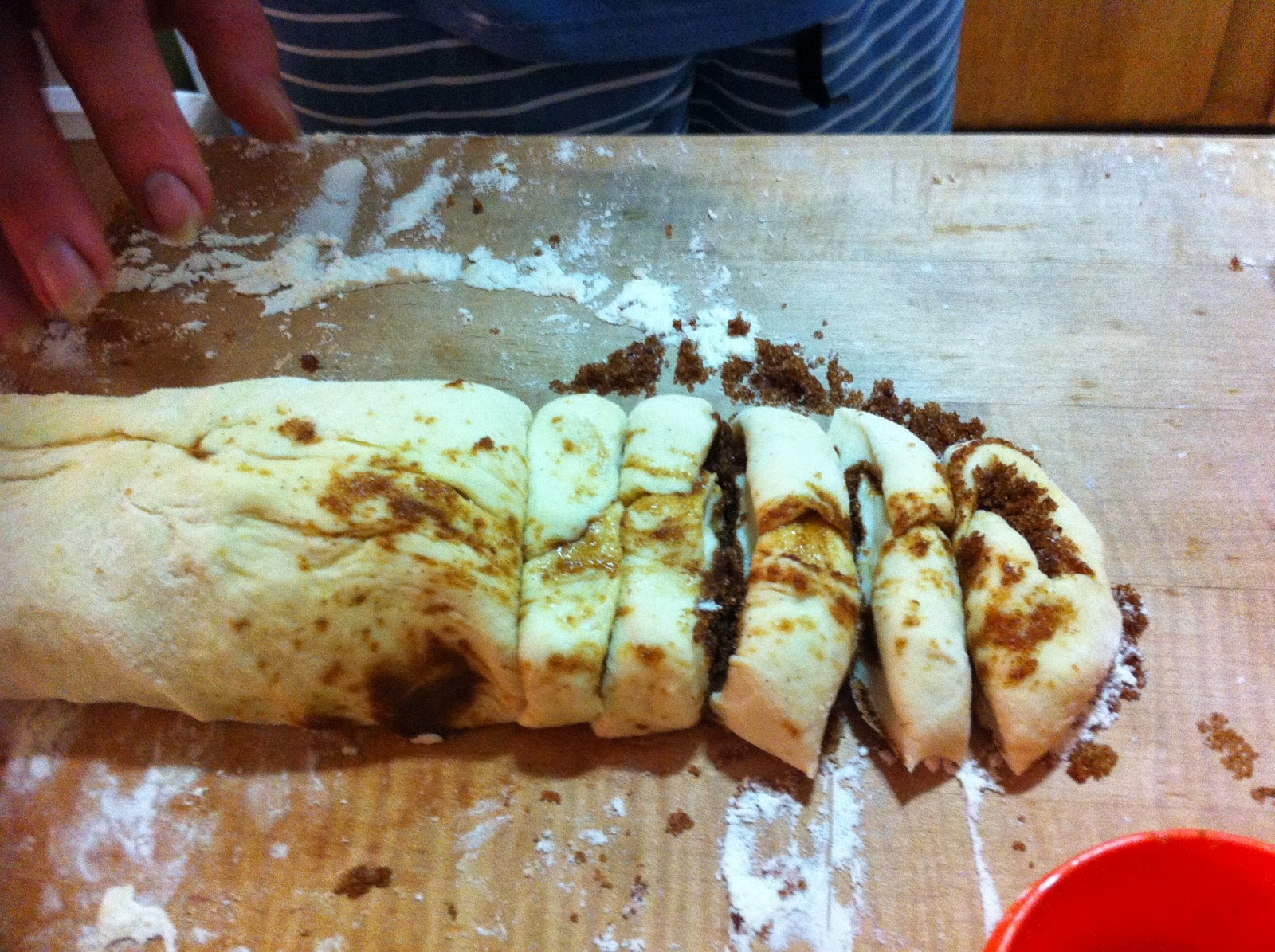 So here they are, ready to bake! Behold, the squished, irregular shapes that I'm going to say give them homemade charm! 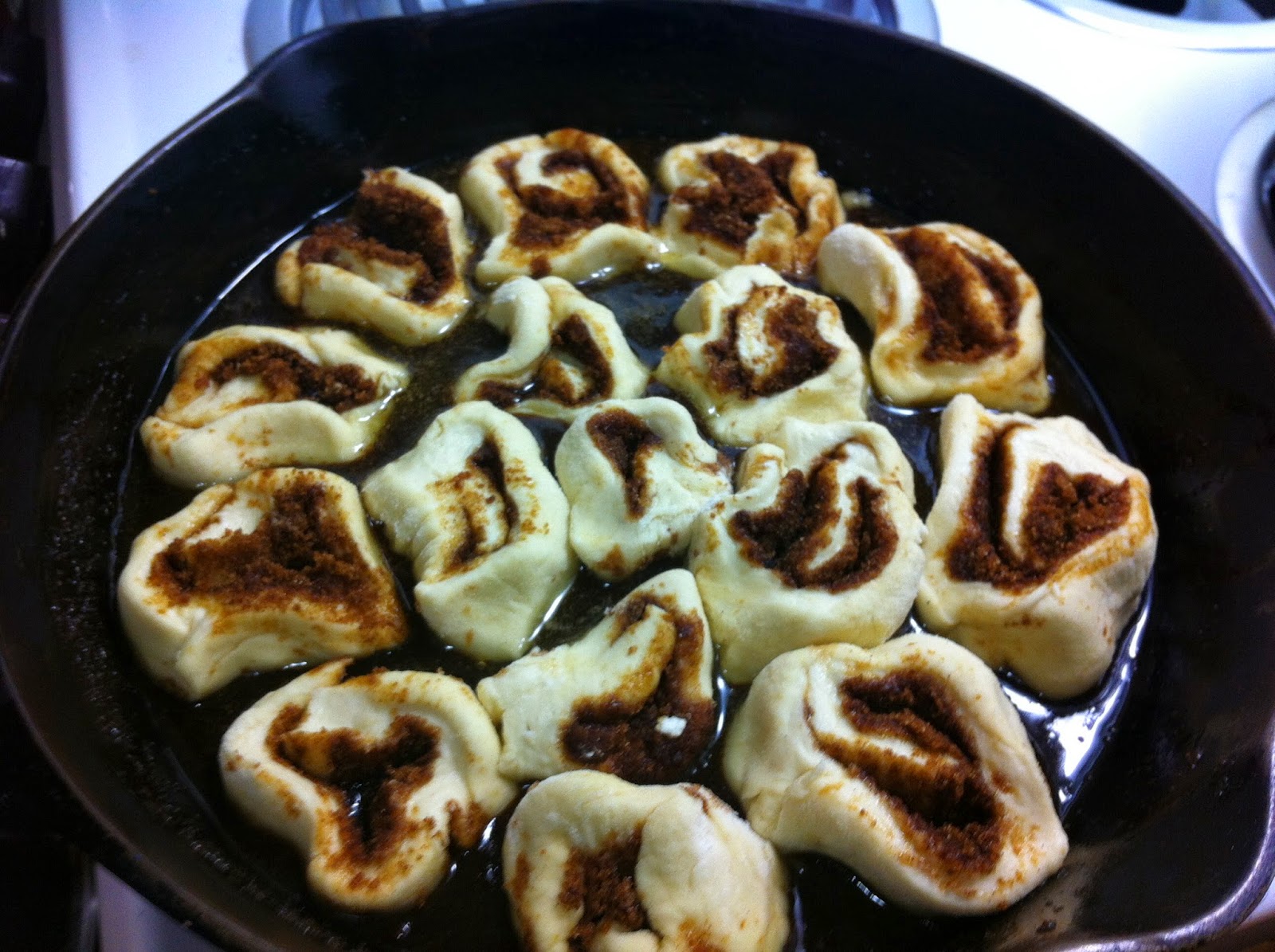 Besides, this is cinnamon rolls baked in butterscotch. How could it possibly go wrong?
I'd like to say that we did not leave them too long in the oven. We set a timer.
I'd glanced up from washing dishes at twelve minutes to see that the oven vent was smoking like someone had put a fireplace in the oven.
The ones on the outside were completely ruined. And the brown sugar stuff in the pan had hardened to just the right consistency to get stuck in your teeth. We pulled some out of the middle to see if this was good enough to try again. 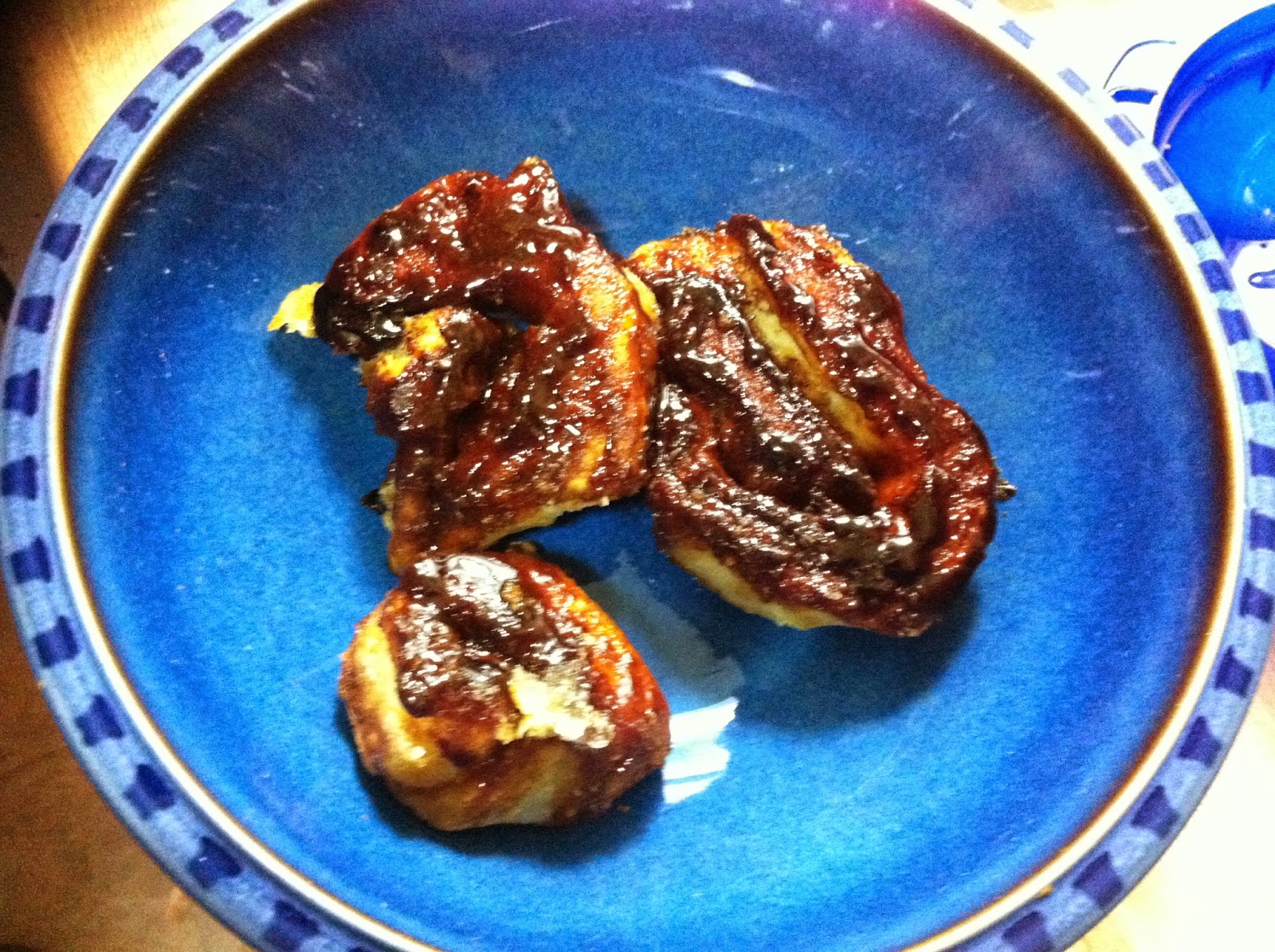 And so, as promised, here is Marcus trying these for the first time as I hold up the camera! Although now that I look at these, I'm thinking why didn't we both try them at the same time? Well, at any rate, you can see how funny I thought it was to watch him. 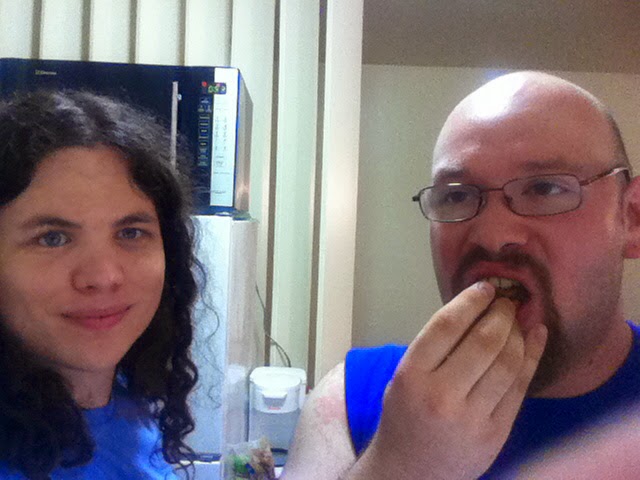 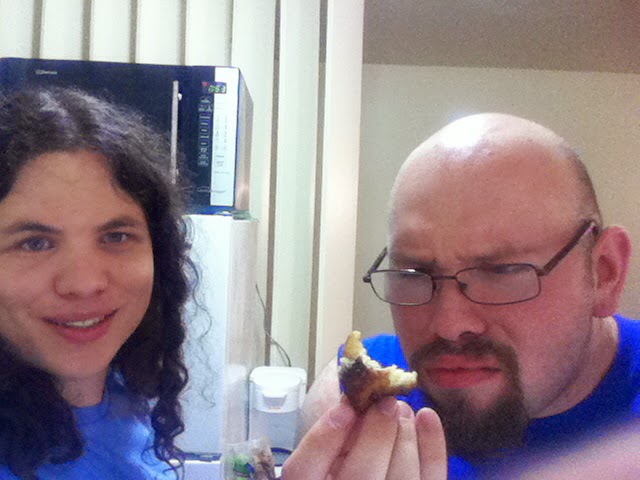 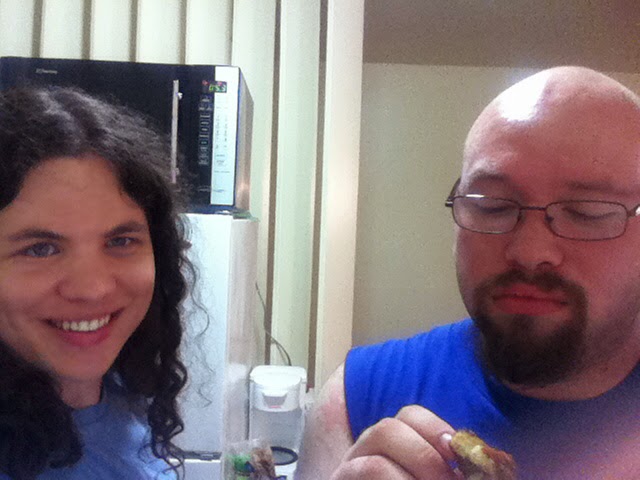 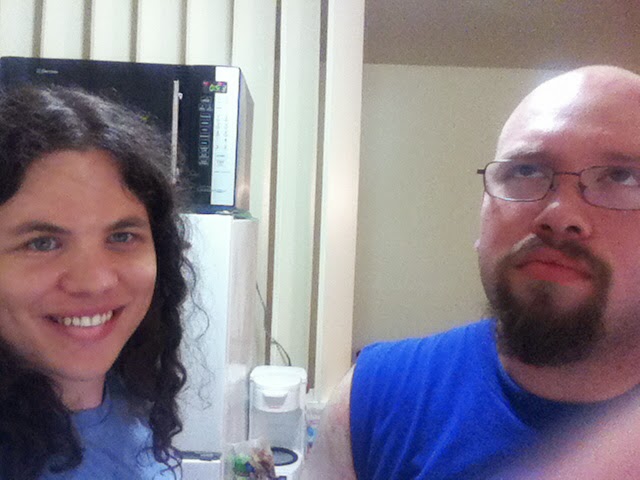 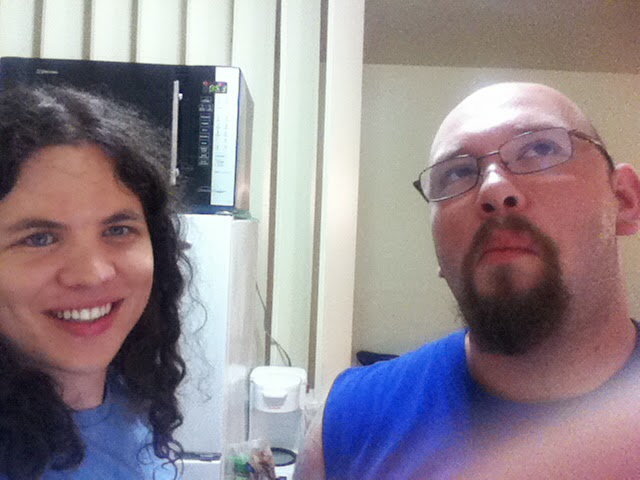 I'm sorry, but after all the buildup of "This is gonna be so good!" and "This is so awesome! We're breaking in your new oven!", having it end up as charred as it did was the funniest thing since whoever wrote West Side Story thought you could make a drama about teenage gangsters that do synchronized chorus-line kicks and burst into song. But if you feel I got off too easy, allow me to provide photographic evidence to the contrary. 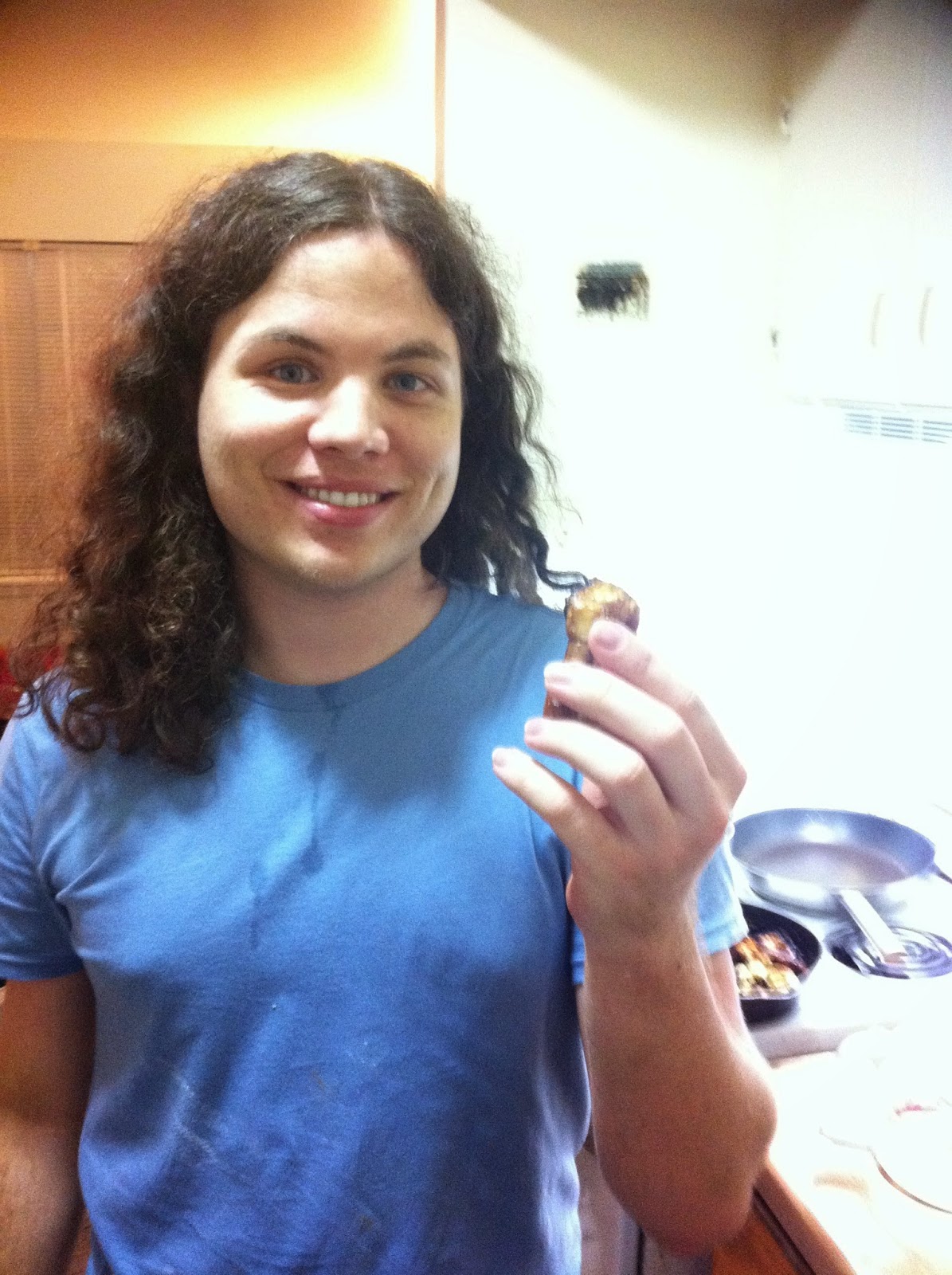 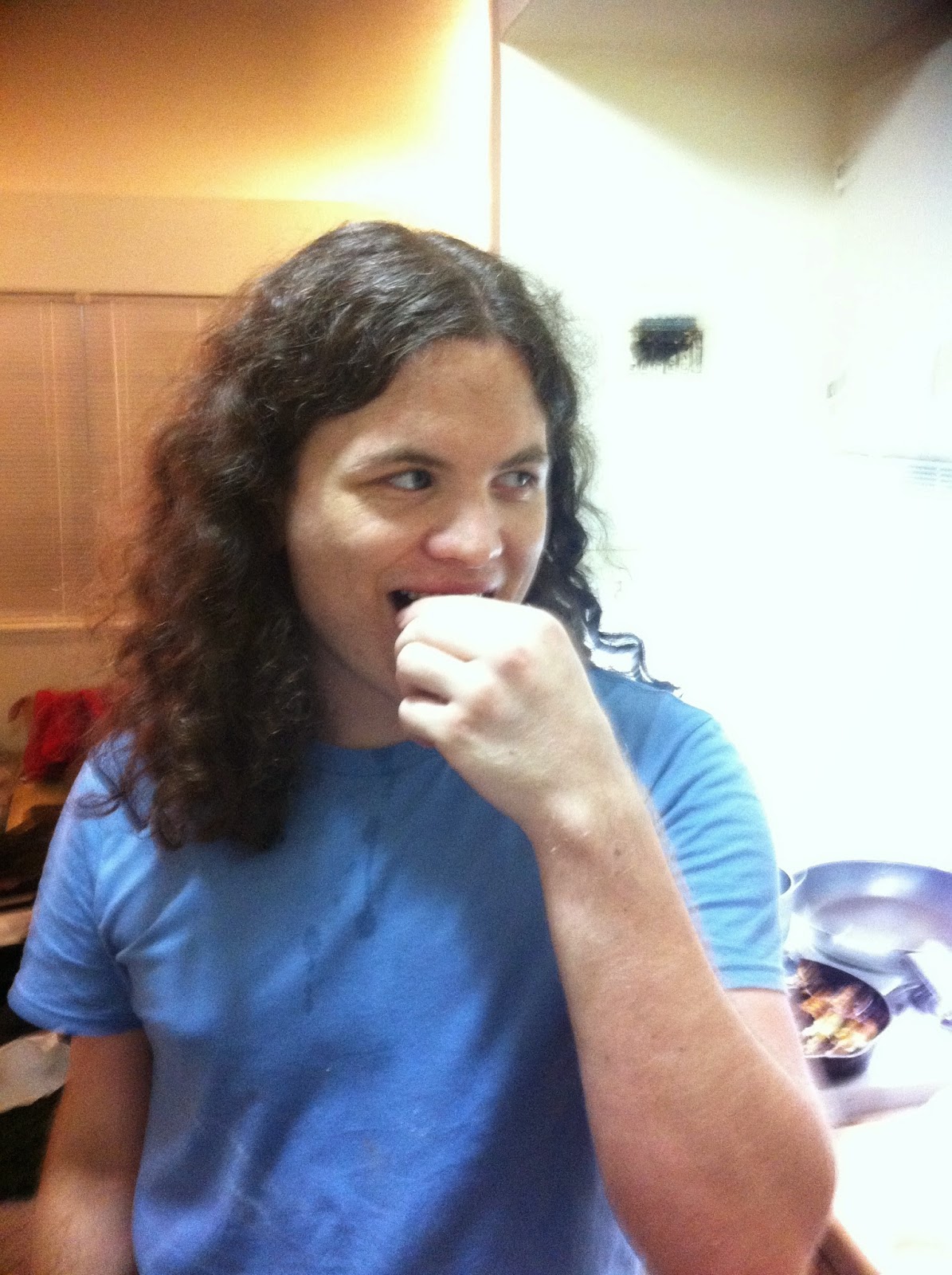 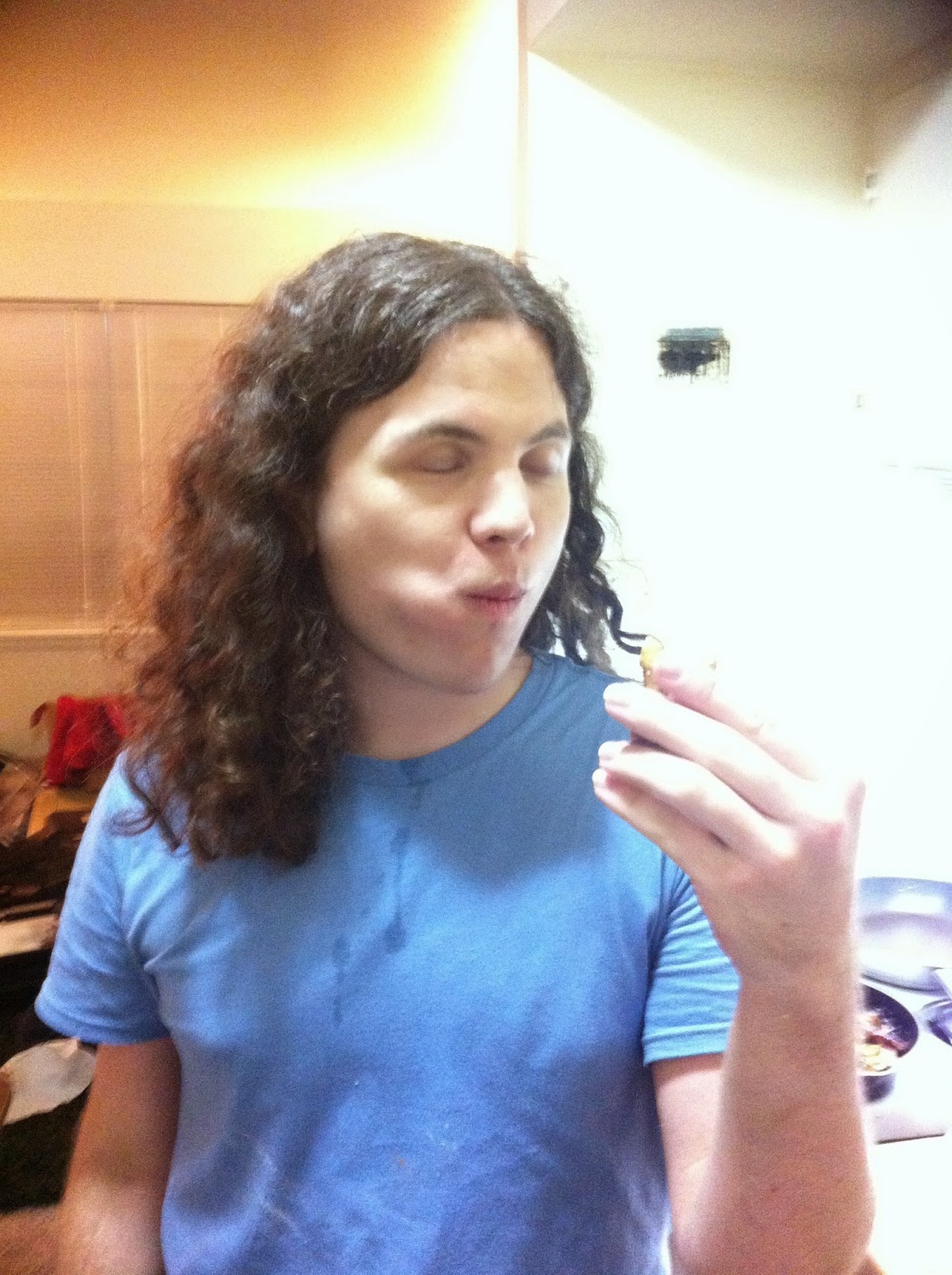 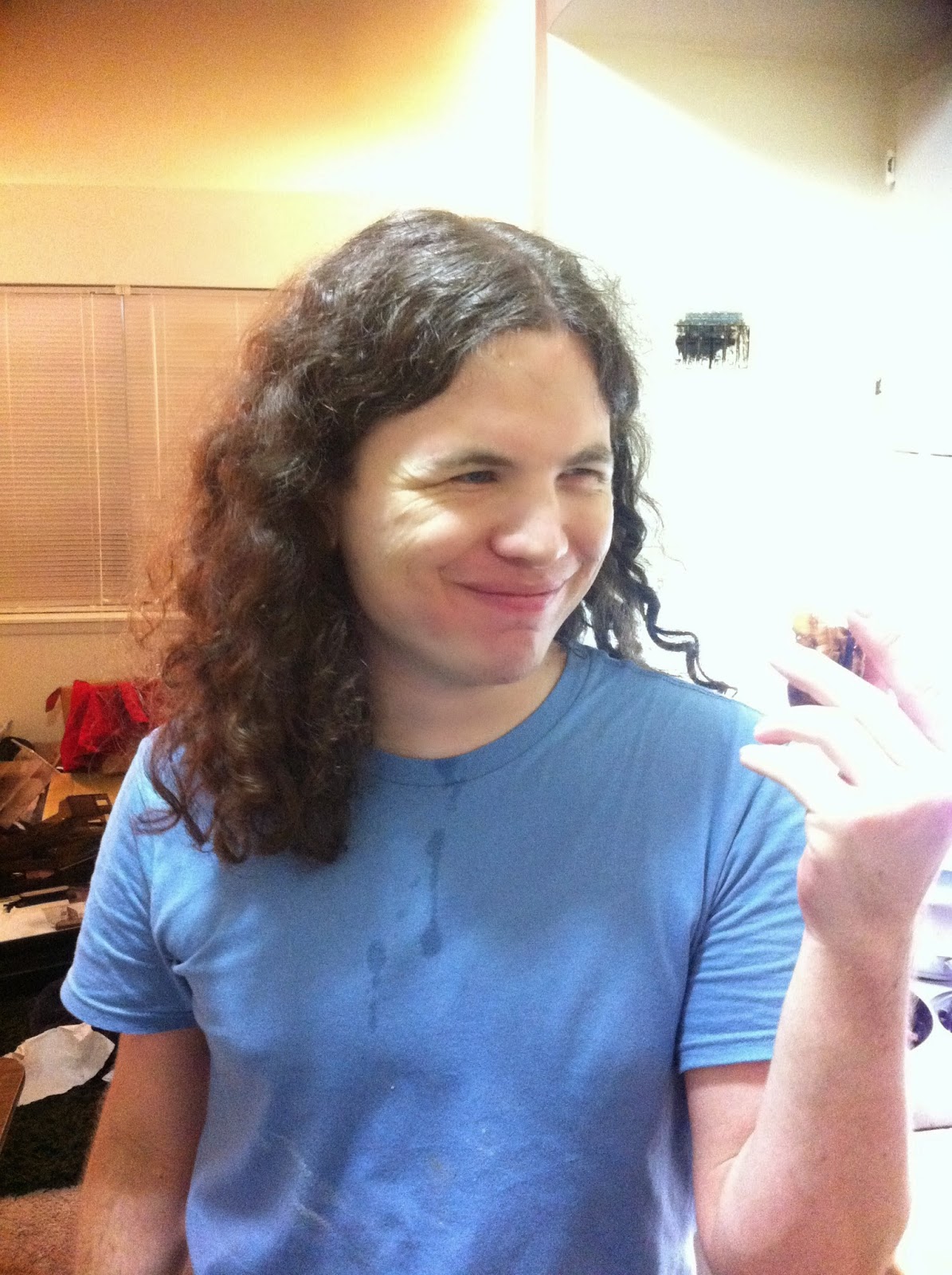 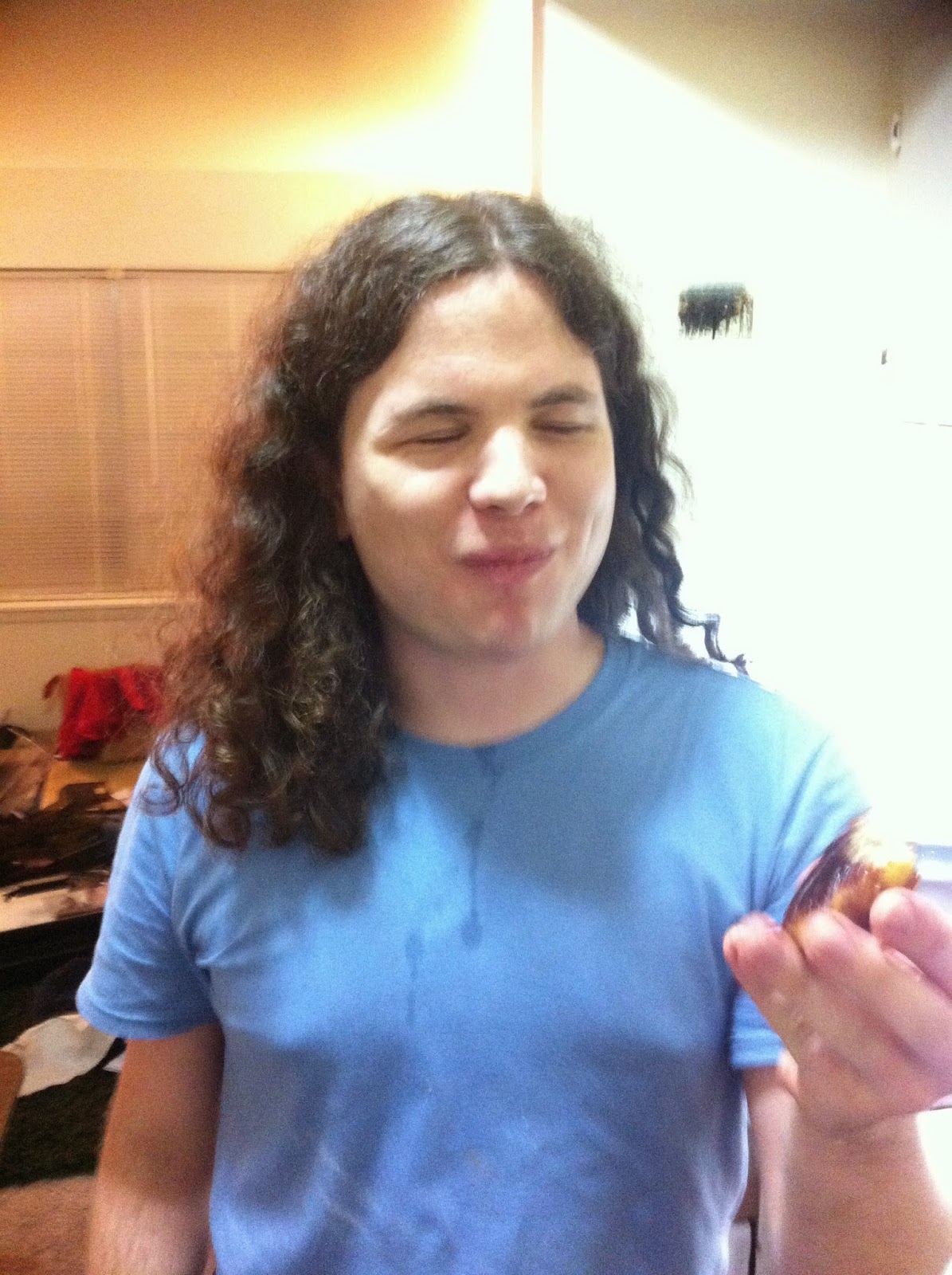 So, they were burnt. But, they seemed promising enough that we'll try them again and check the oven well ahead of 15 minutes. The bread part tasted really good, at least. And I kind of thought that if the butterscotchy stuff melted in the pan hadn't been overbaked until it hardened, it'd have been really good. So at some point we'll try these again! If you try these, let me know how they came out!
Posted by S. S. at 4:04 AM