Since A Book of Cookrye is now a mobile cooking blog (ie I don't have my own kitchen so friends and I tend to visit and cook a lot), today we're at a friend of mine named Austin's kitchen and making... 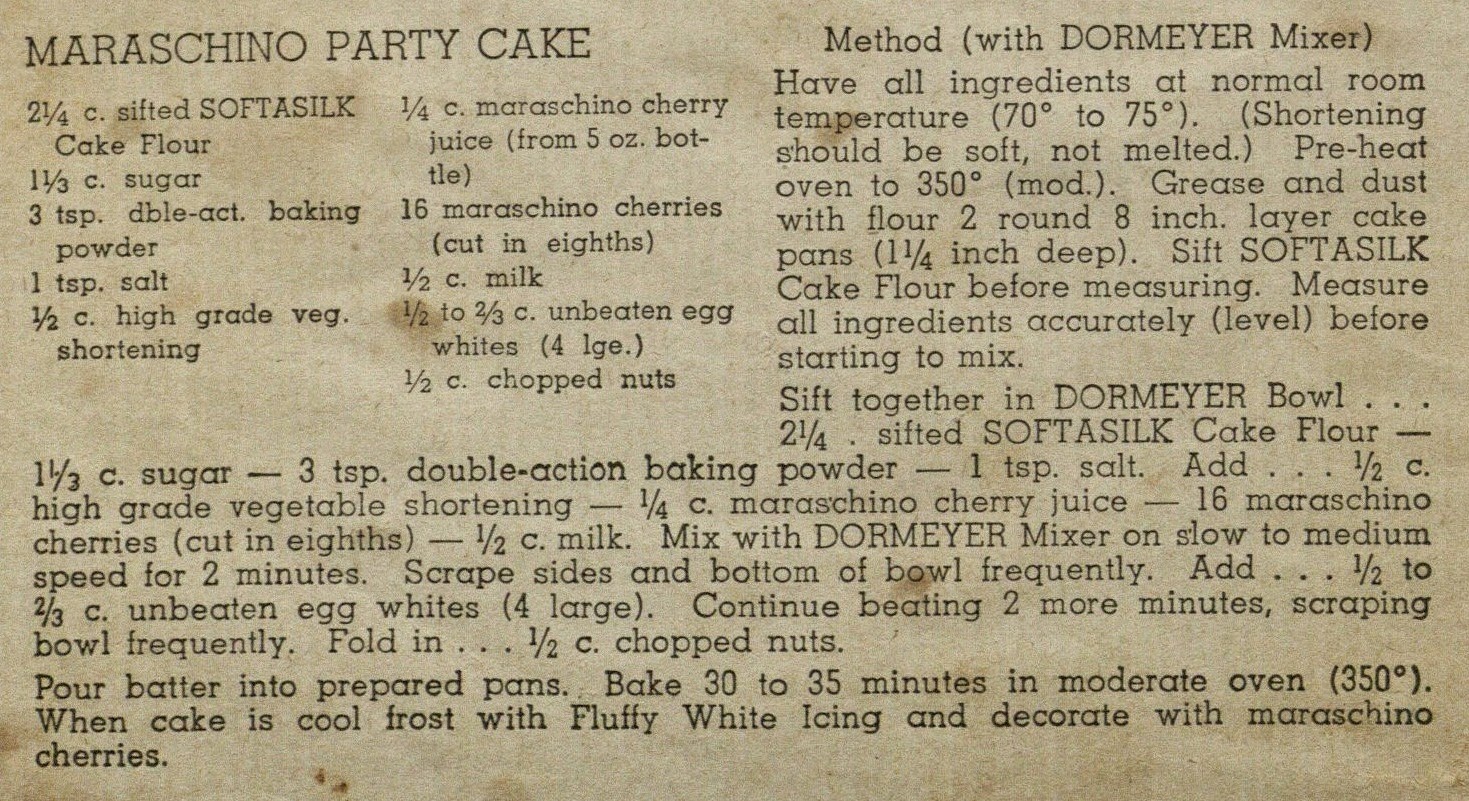 Also, as a special bonus, we've got three people trying this! Marcus, Austin, and myself!
When I was a wee tot, I used to really like maraschino cherries- I sometimes liked the cherry on top more than the sundae under it. When I realized you could just go out and get a jar of them instead of having them granted to you one or two at a time over ice cream or in a limeade, my little preadolescent mind was blown. I should say that these days I find them to be excessively sweet or something like that, but I would be lying.


You know what? I've already mixed a lot of cakes, and (prepare for a Discworld reference) as Nanny Ogg says, patience is a virgin. Let's skip straight to where this goes from regular cake to a maraschino party cake!

You know what that last one makes me think of? Strawberry milk. I liked that stuff so much as a kid Mom stopped buying the syrup lest my brothers and I get diabetes and die. And I'd squirt so much into the glass it'd be at least this dark. And you know what? I still like it.

Notwithstanding that I forgot to add the cherry slivers, I wanted to see what this tastes like of its own accord. Austin wanted to add chocolate chips, which really did sound good to me too. They say a good compromise leaves everyone equally miserable, this one just meant we only had to pay for a smaller bag of chocolate chips.
While it was baking, we all ate the cake batter. It was really, really good. Then we made the icing. Austin has an entire rack of flavorings and extracts, and we both wanted to add this one. 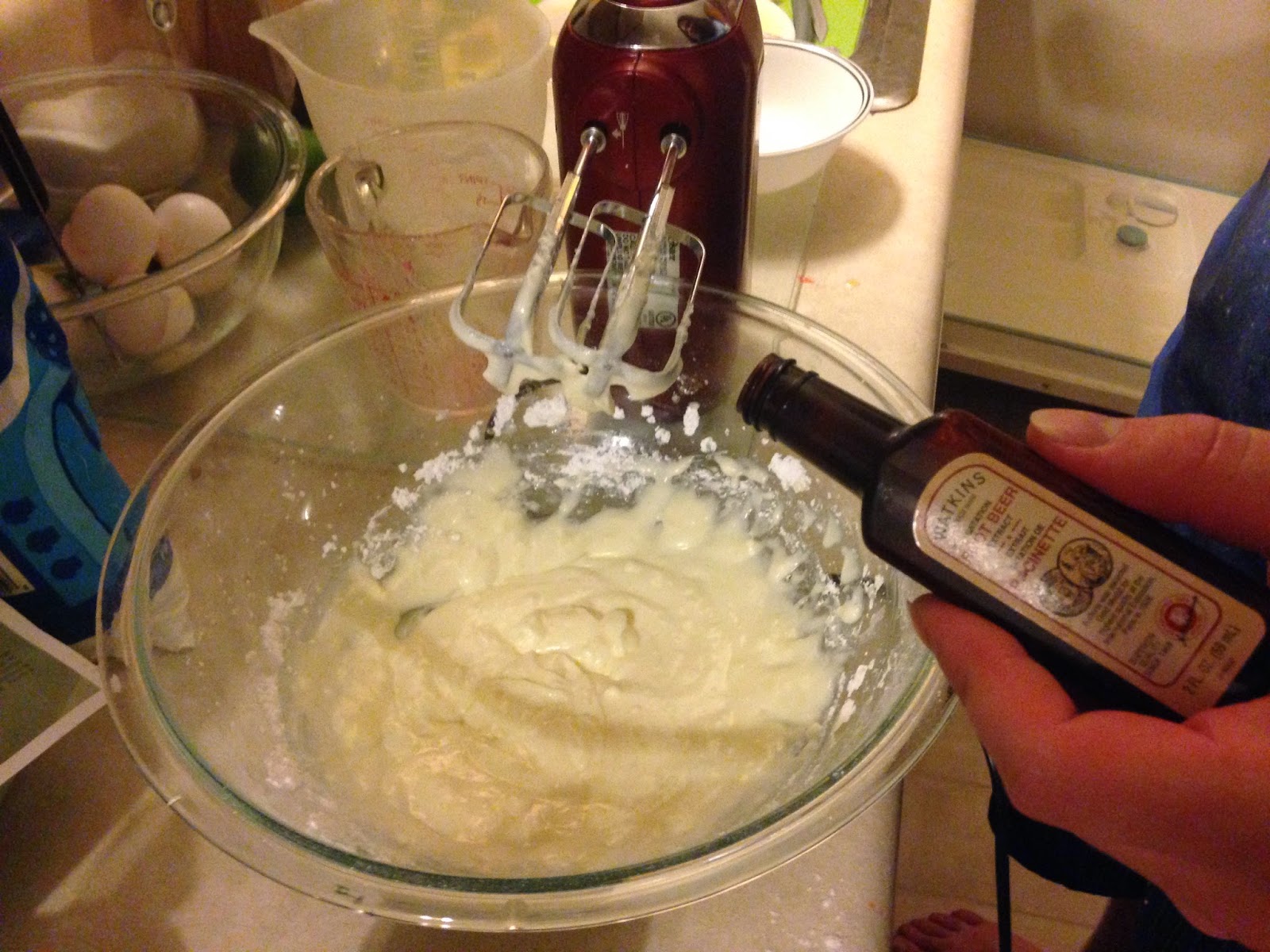 When the cake was done, I tried to pass the time waiting for it to cool cutting up what cherries we hadn't eaten for the top. While I always thought maraschino cherries were unnaturally colored, I never realized just how fake the red looks.

But as lovely as the cherries look in the cup, the cake was still too hot to ice. Since I no longer have the wall-mounted AC to set things on to cool, Marcus got volunteered to speed things up a bit. 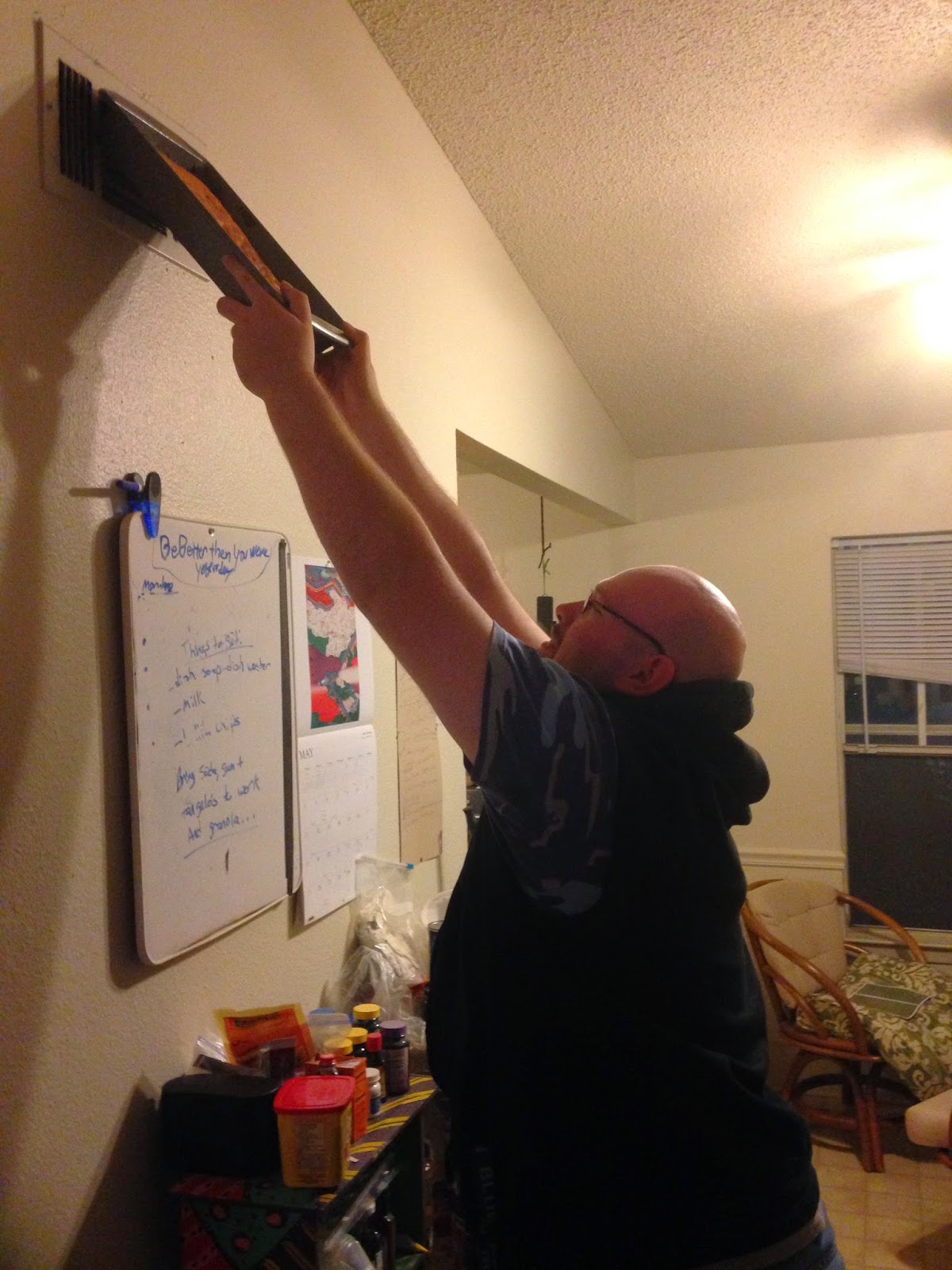 No amount of saying "It looks so retro!" could fix the fact that cherry halves make a cake look like it has red welts.


So, as promised, here's proof that I can find two other people who will eat my food. Since Austin volunteered his kitchen and his camera-phone (I forgot mine), he went first. 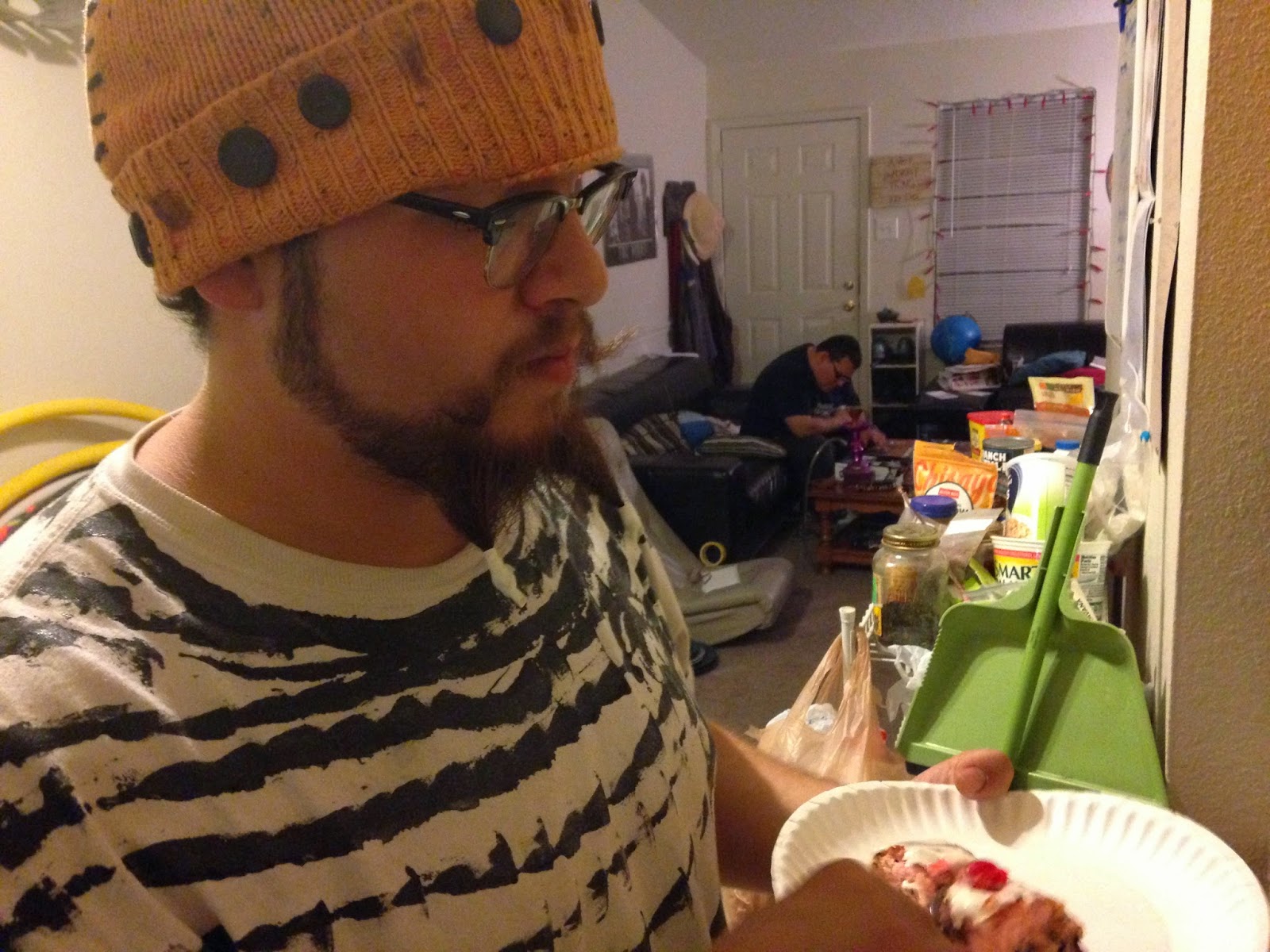 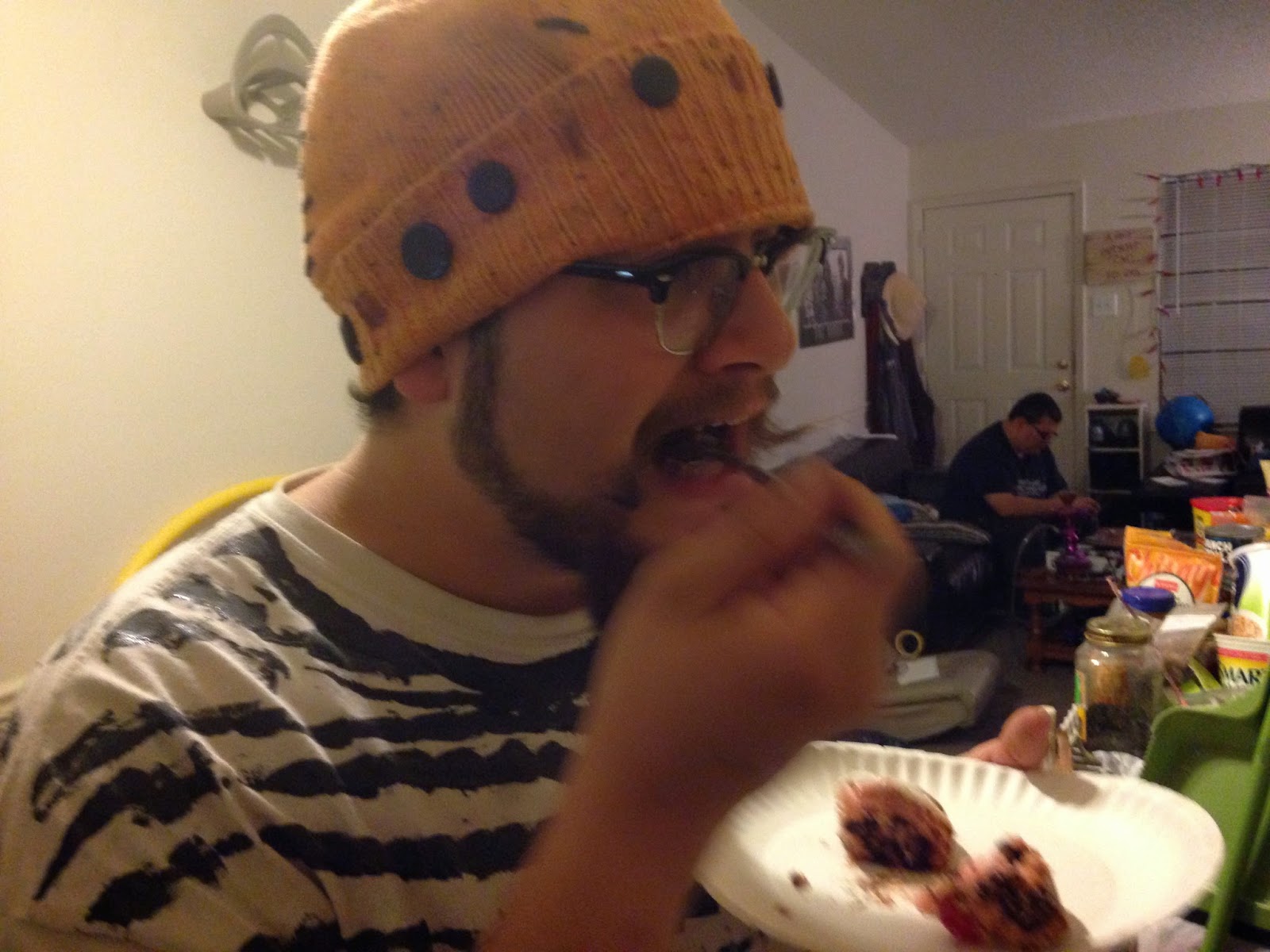 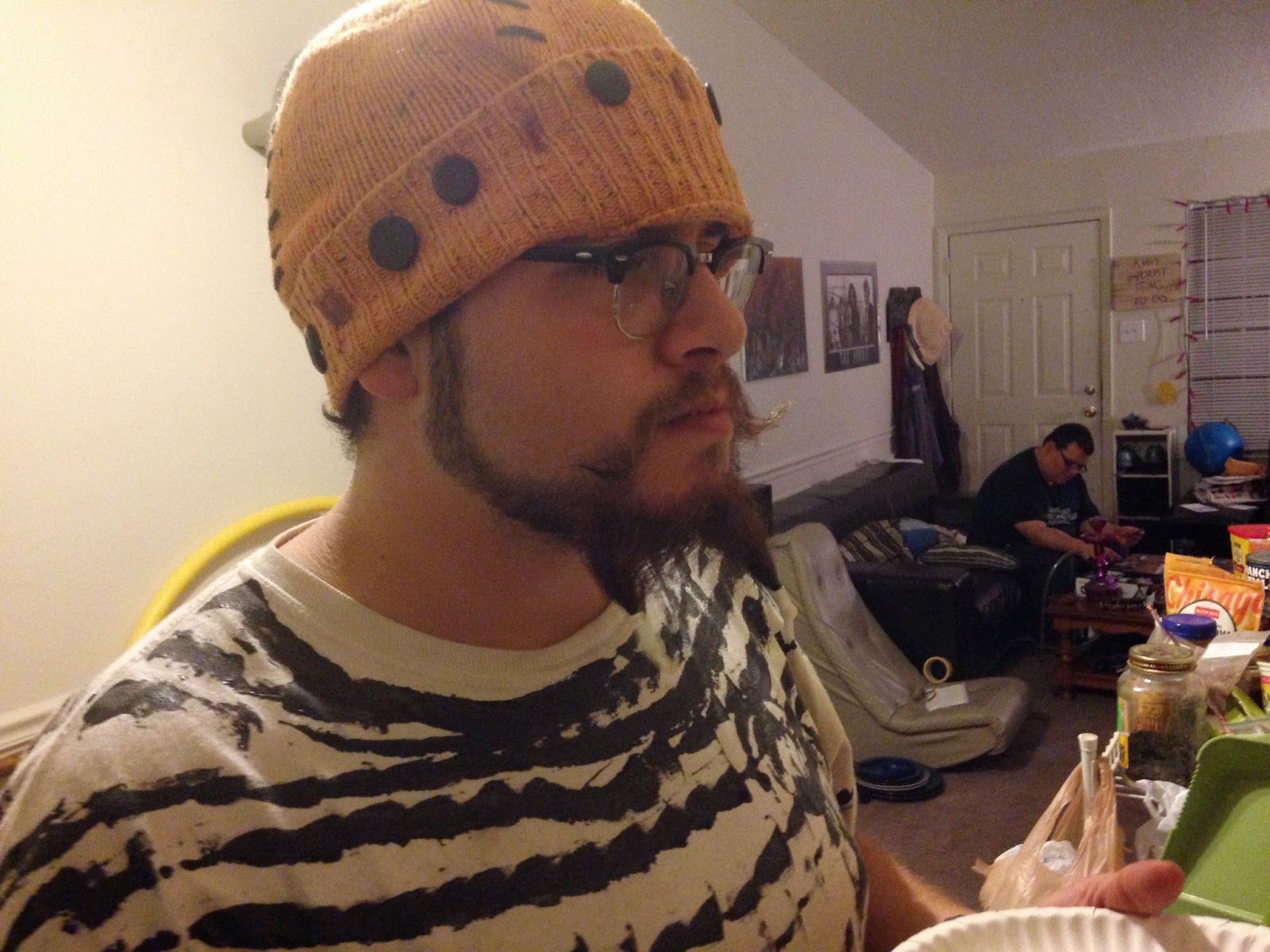 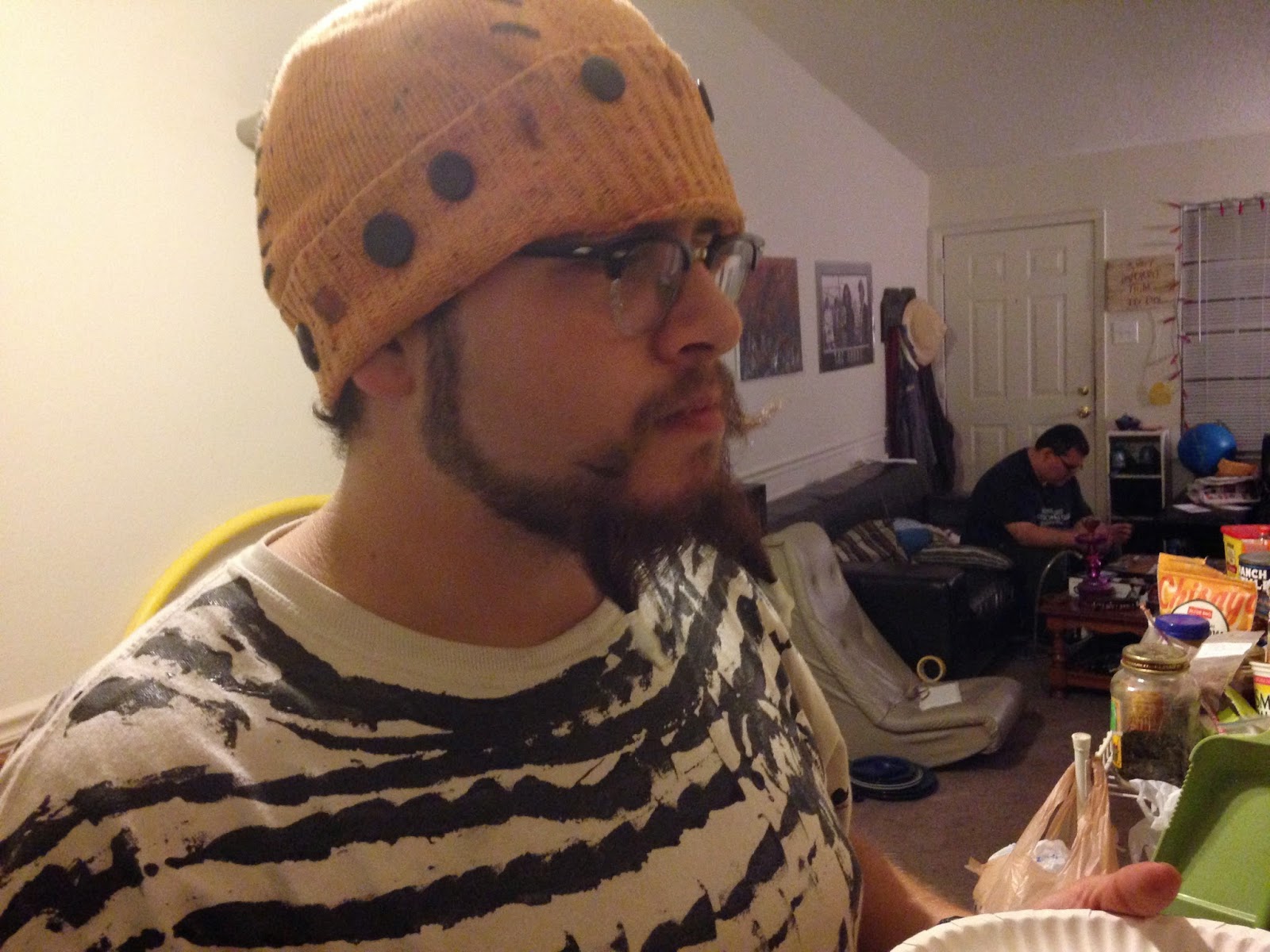 He may not have reacted much visibly, but he did say he liked it. 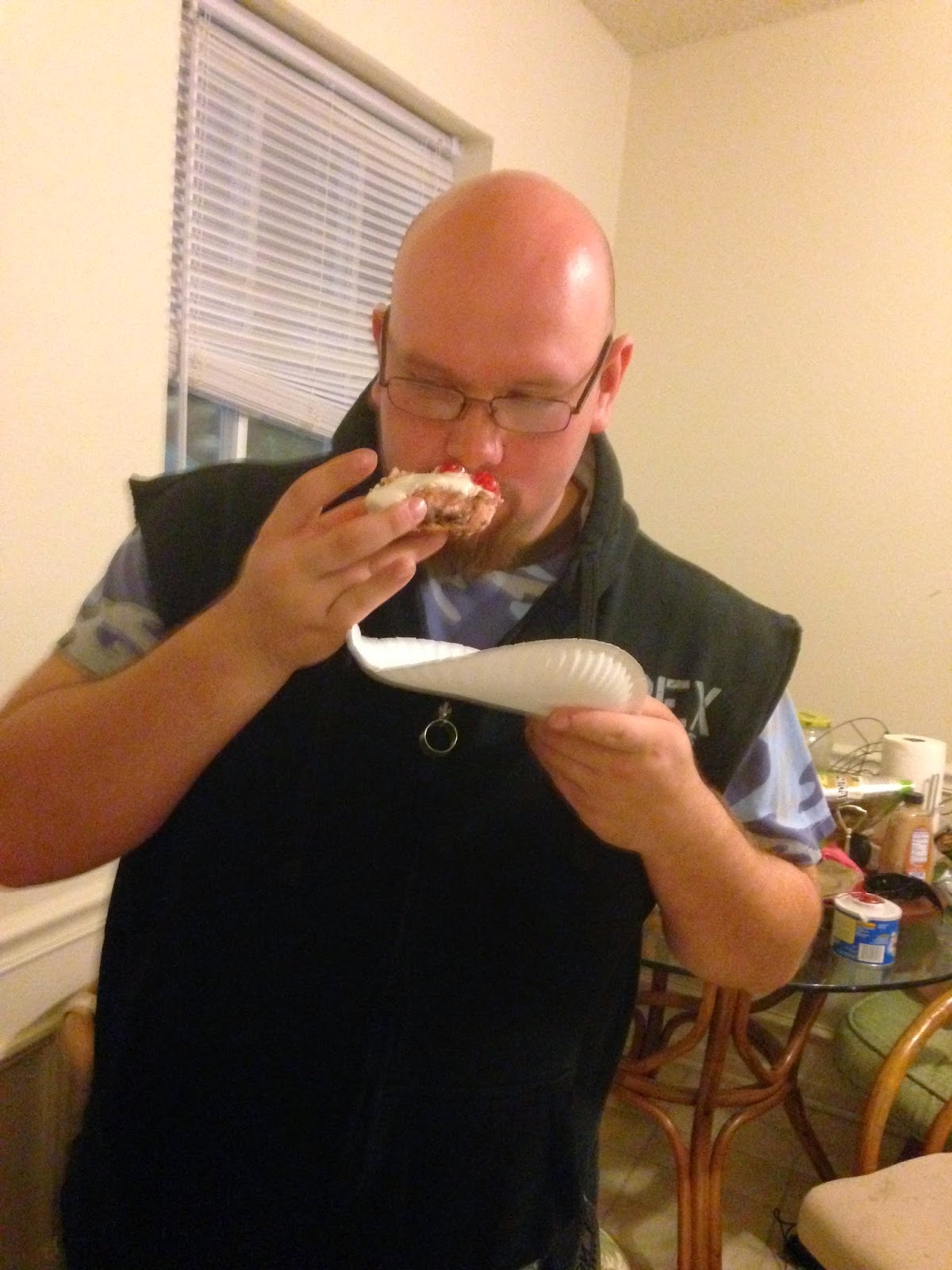 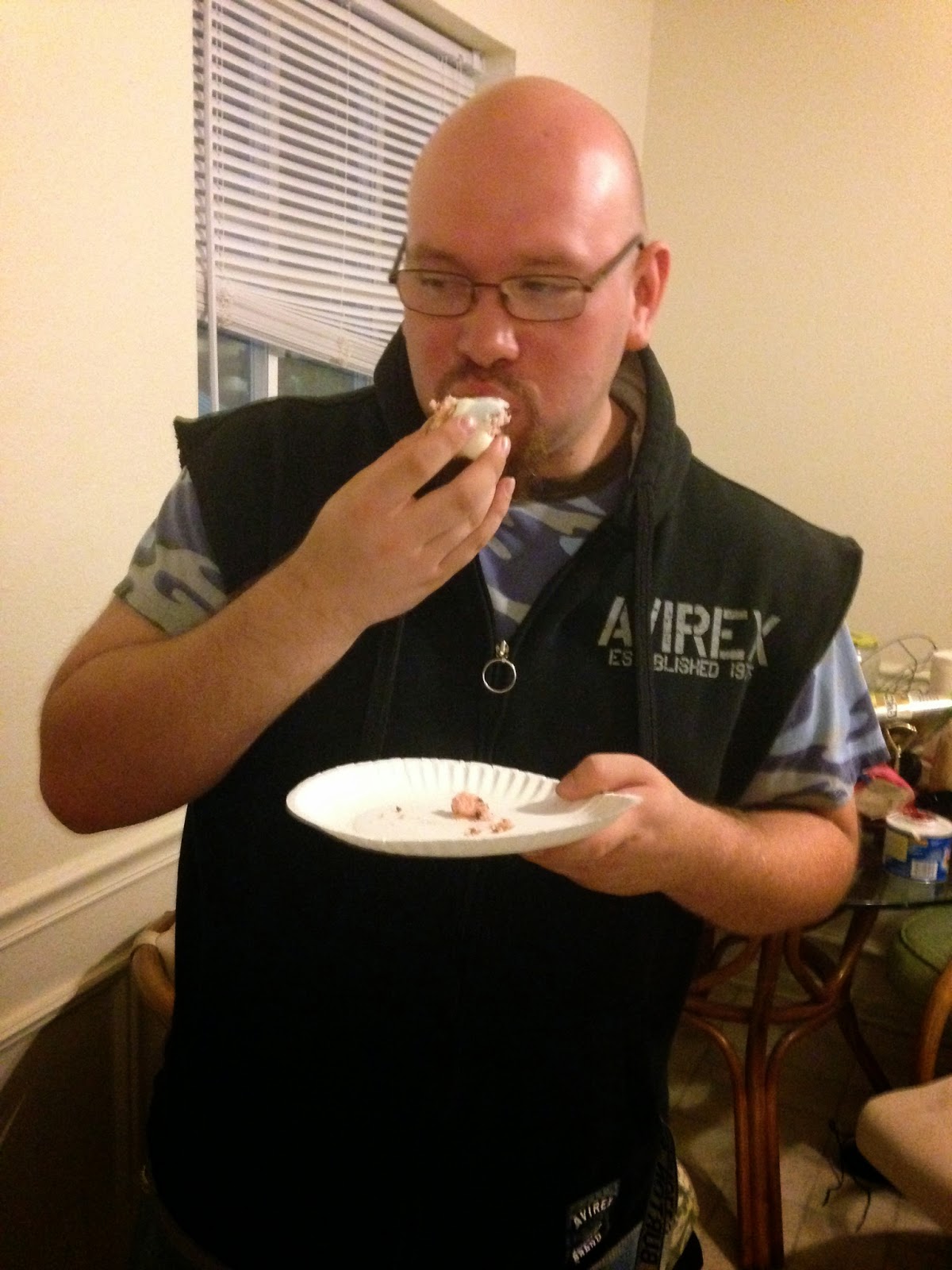 And, displaying a stunning inability to keep my eyes open, I went last. 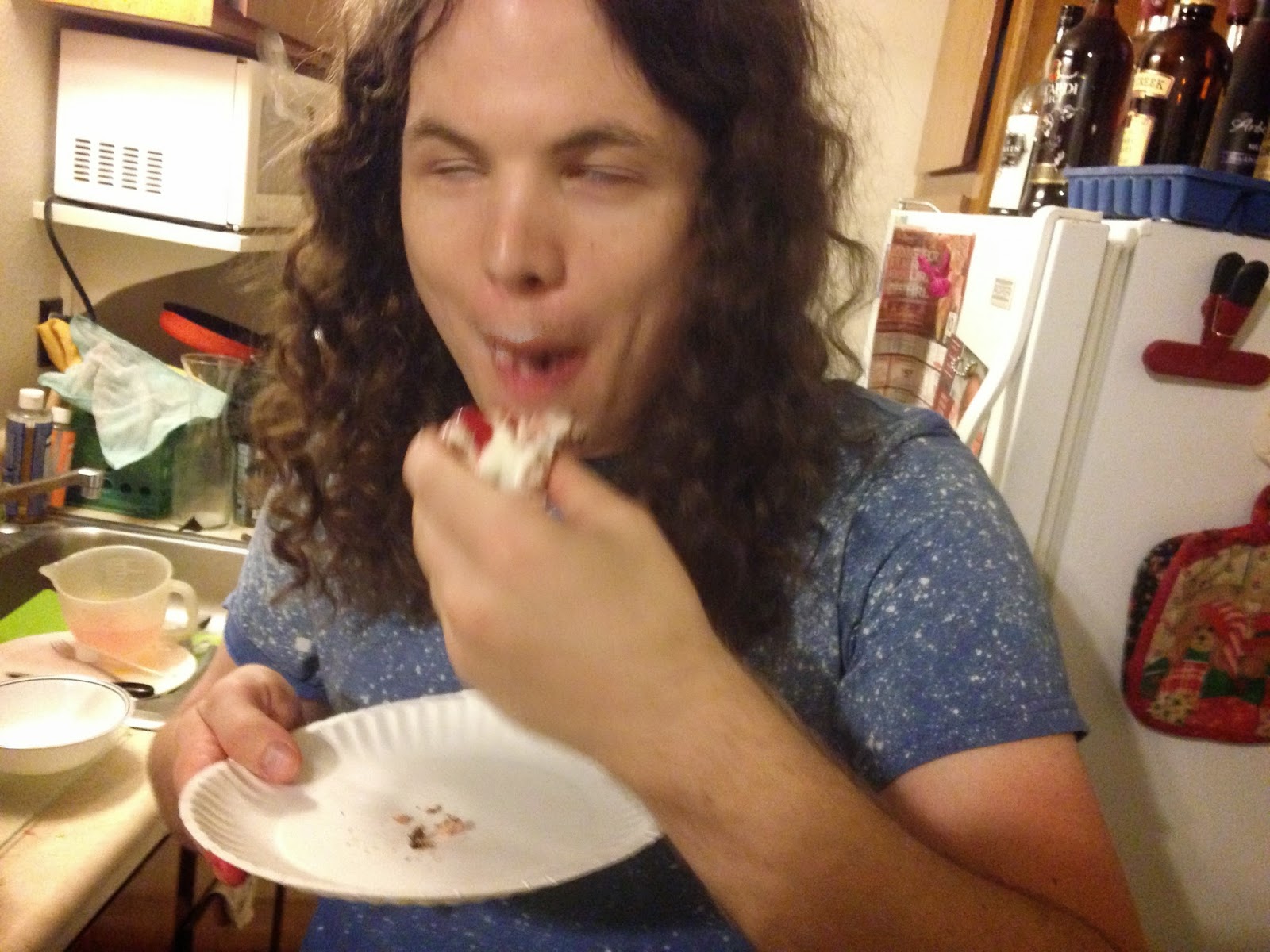 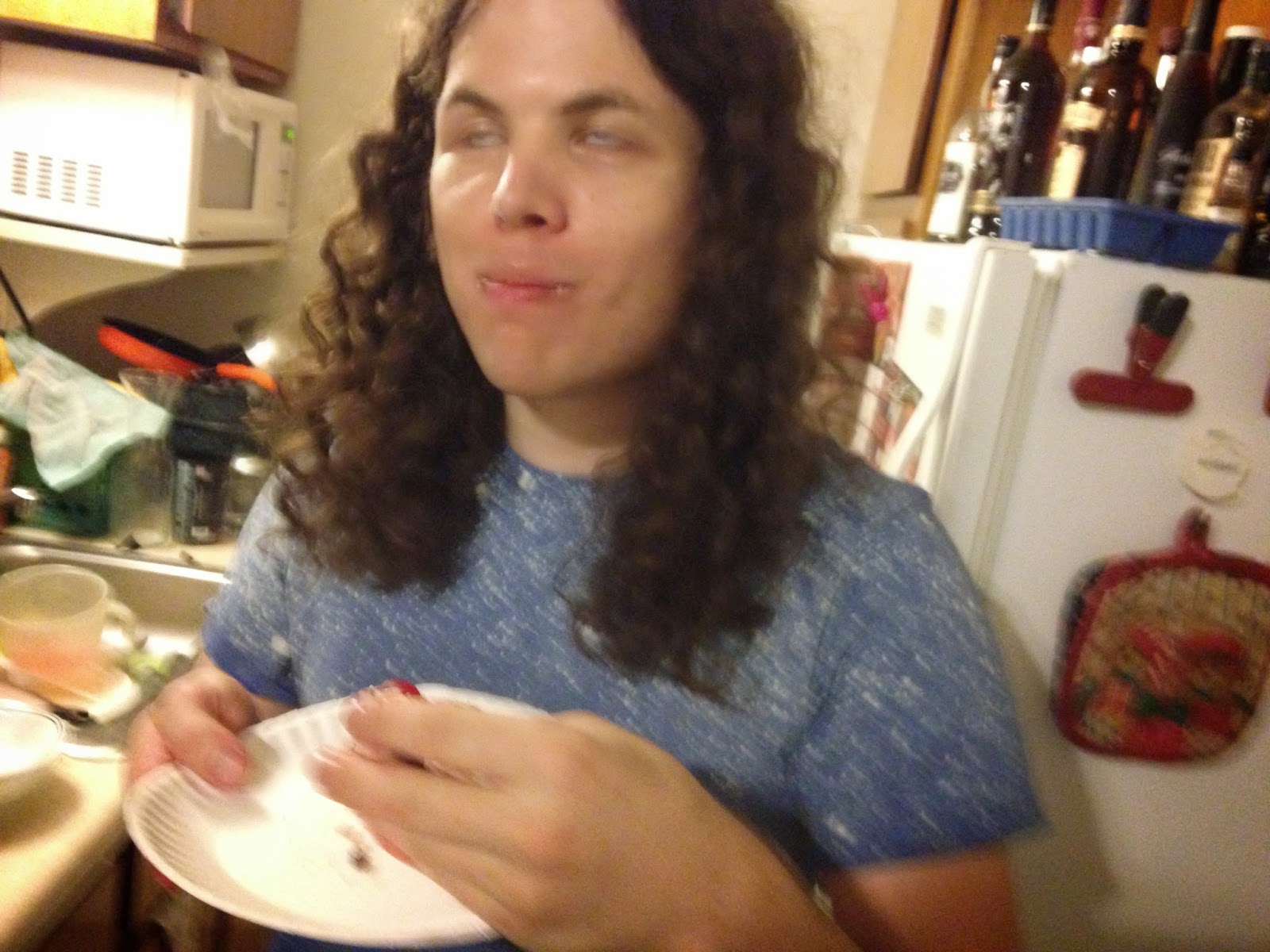 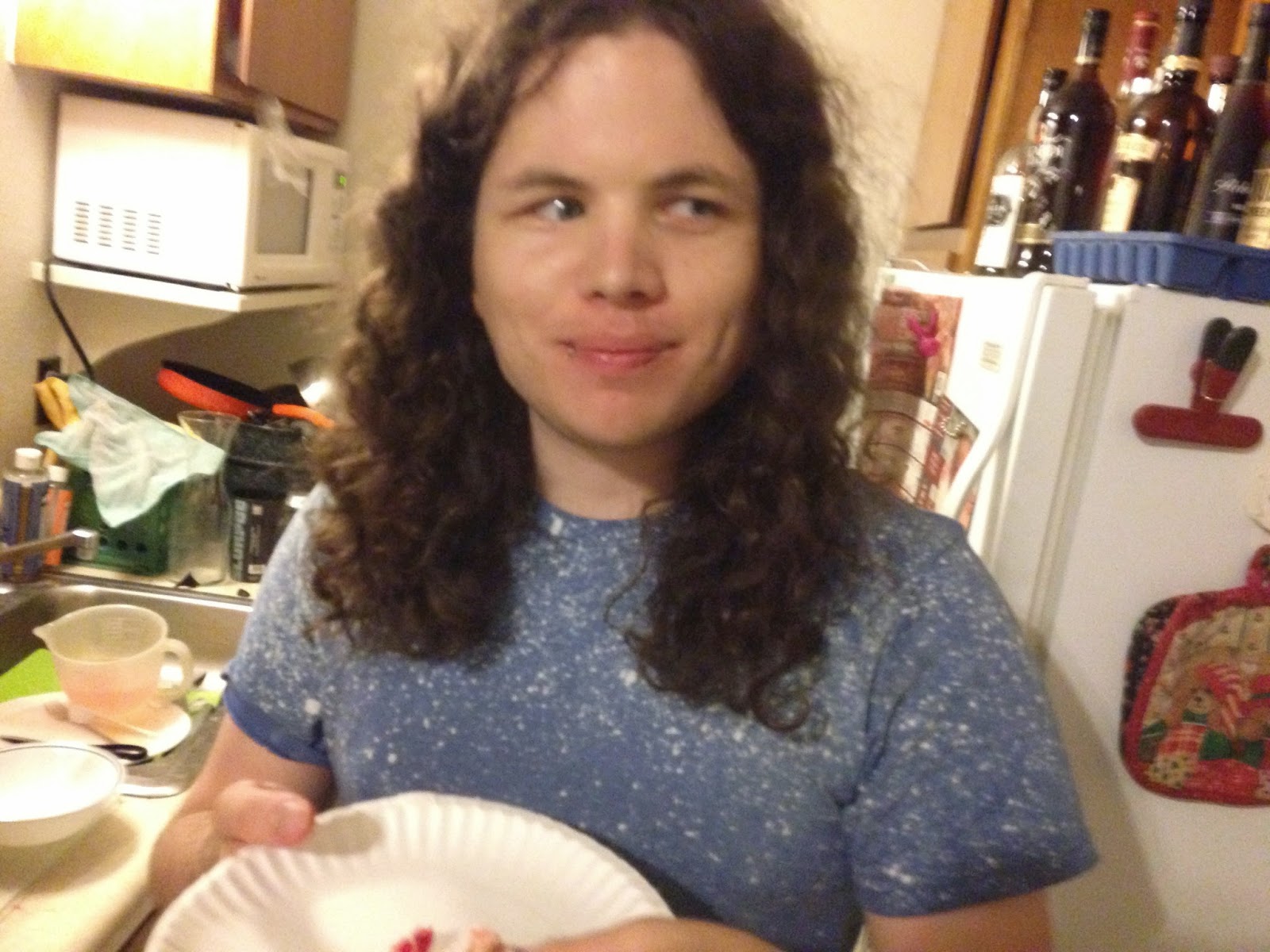 Everyone liked this thing. I was a little disappointed that some of the cherry flavor baked out, but it was good nonetheless. Also, had I remembered to stir in the cherry slivers, that probably wouldn't have been a problem. Also, the root beer extract in the icing went so well with it!
And finally, I must note that Austin's kitchen had something I haven't had the privilege of using in years: a working dishwasher! It was so liberating not to have to hand wash everything.