A trip to ancient Rome involves most of a wine bottle

Today on A Book of Cookrye, we present a special treat! Do you like wine?

Apparently a "patina" is a dish of whatever sort of filling (sweet, savory, whatever) with eggs broken in to set it. I wonder if this has any relation to the word "patina" in its present meaning. Stranger things have happened. The word hearse comes from a long etymological chain starting at the Latin word for rake (the gardening tool, not the 17th-century dandy).
This comes out of this lovely book which I got out of the library. No, it's not out of special collections like these have been, but it was a nevertheless really fun surprise when I was going up and down the aisles waiting for traffic to let up so I could go home. 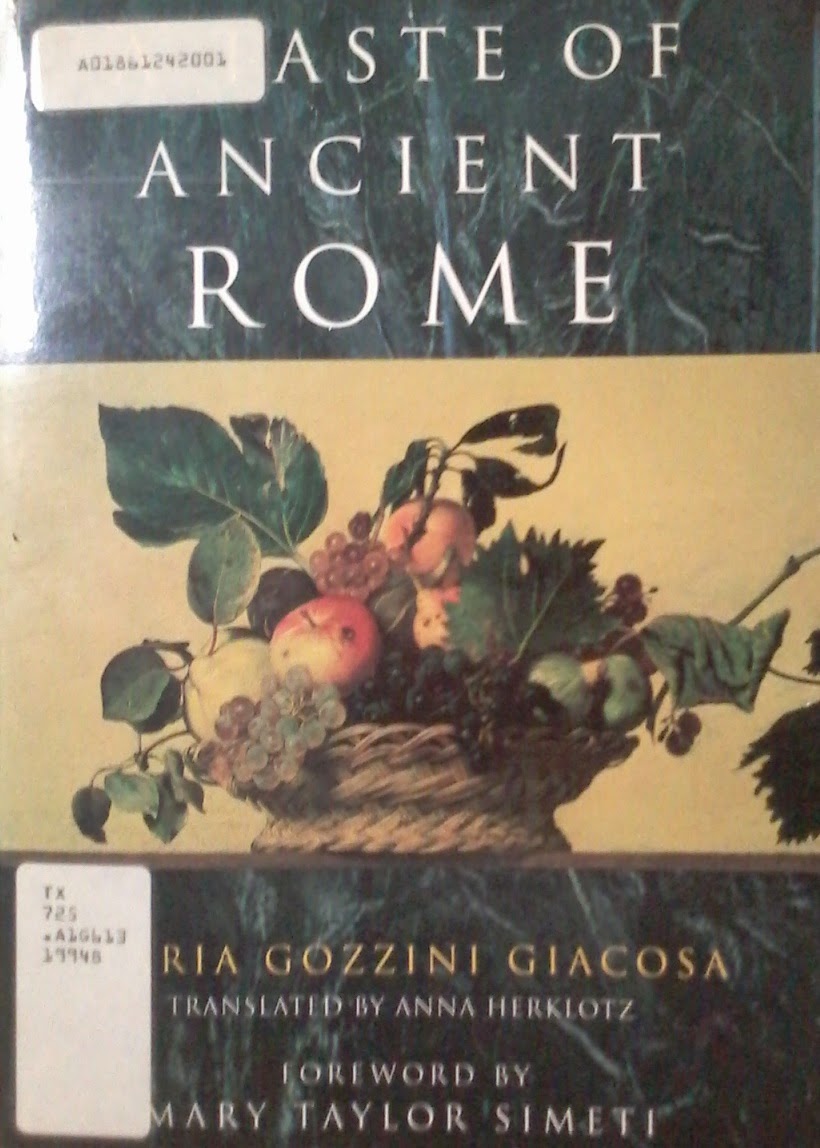 Ilaria Gozzini Giacosa writes a really eloquent introduction saying that Roman food does not resemble Italian food of today, and her husband wondering how they got along without tomatoes motivated her to begin researching what they ate. Furthermore (and I really like this sentiment), she did not seek to adapt recipes to modern taste but to present them as would have been served at the time.
As one would suspect when an empire takes up the entire Mediterranean coast and a lot of land reaching out in most directions, they did not eat really bland food and wait for the first shipment of tomatoes and chocolate. Which brings us to today's special ancient treat!
This recipe stood out to me when I was flipping through the book. Use of recognizable animal parts aside, the combination of ingredients seemed intriguing. Pine kernels? Wine? Fish sauce? I could see how it might add up to something tasty, but couldn't imagine what it would be like. Therefore, I had to find out. I figured of all the recipes in this book, this is one of the few that Apicius (the author of the Roman cookbook this came from) named after himself. You have really be proud of a creation to name it after yourself. I was so excited when I saw this, and was practically giddy when I finally could make it tonight.


I've read that refrigerating pie crust for a while would make it roll out a lot easier and possibly make me revise my current method of rolling it into a sheet, attempting to lift it up, and sticking the little bits that come up into the pie pan until I've assembled a crust that lines it completely. That's why I made the crust an hour or so before I started the rest; it's got nothing to do with realizing we were out of eggs and running off to the store. 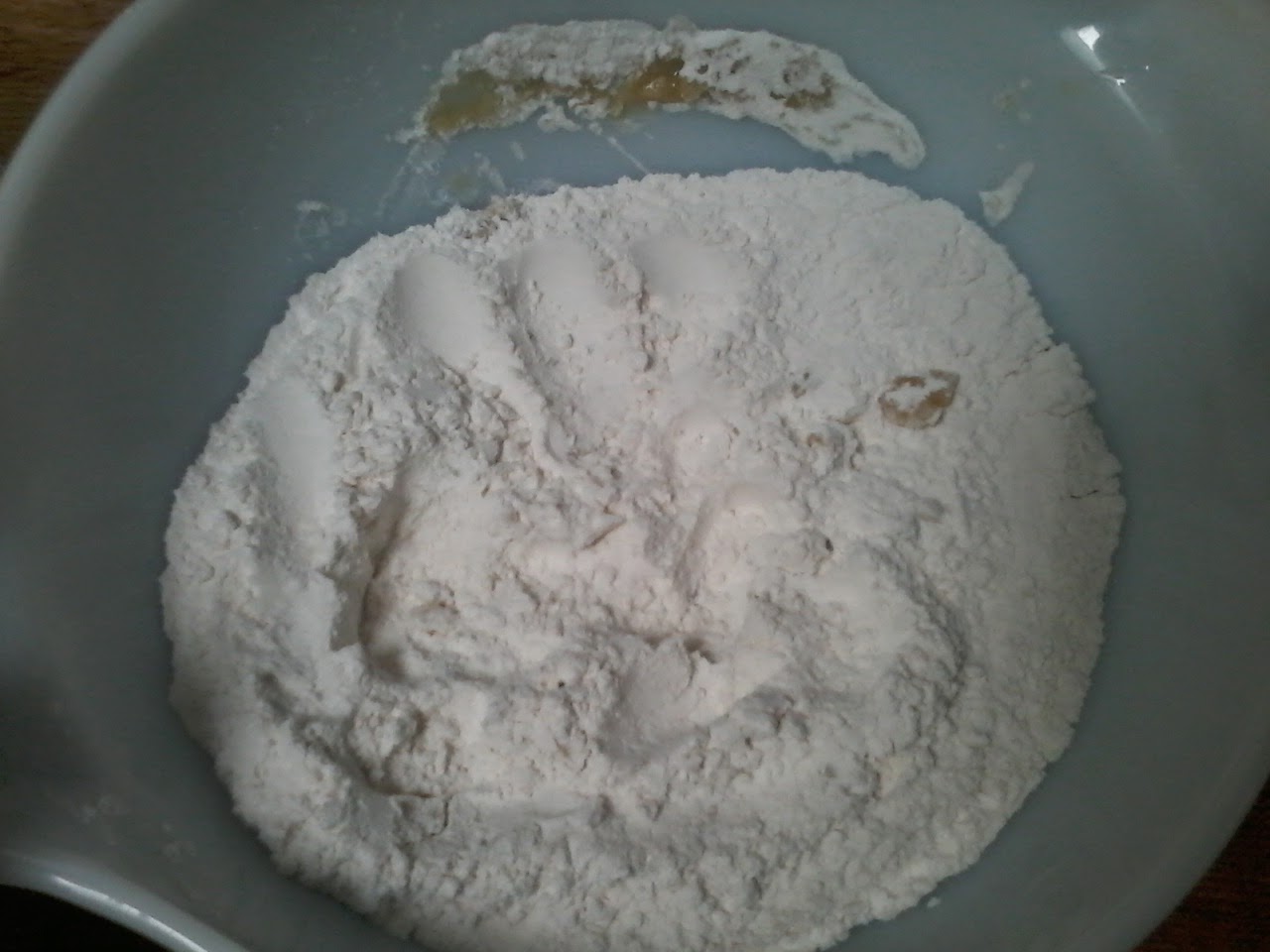 Stirring the flour and oil together yielded a few lumps that did not mix in. Setting aside the spoon and using my hand worked a lot better. 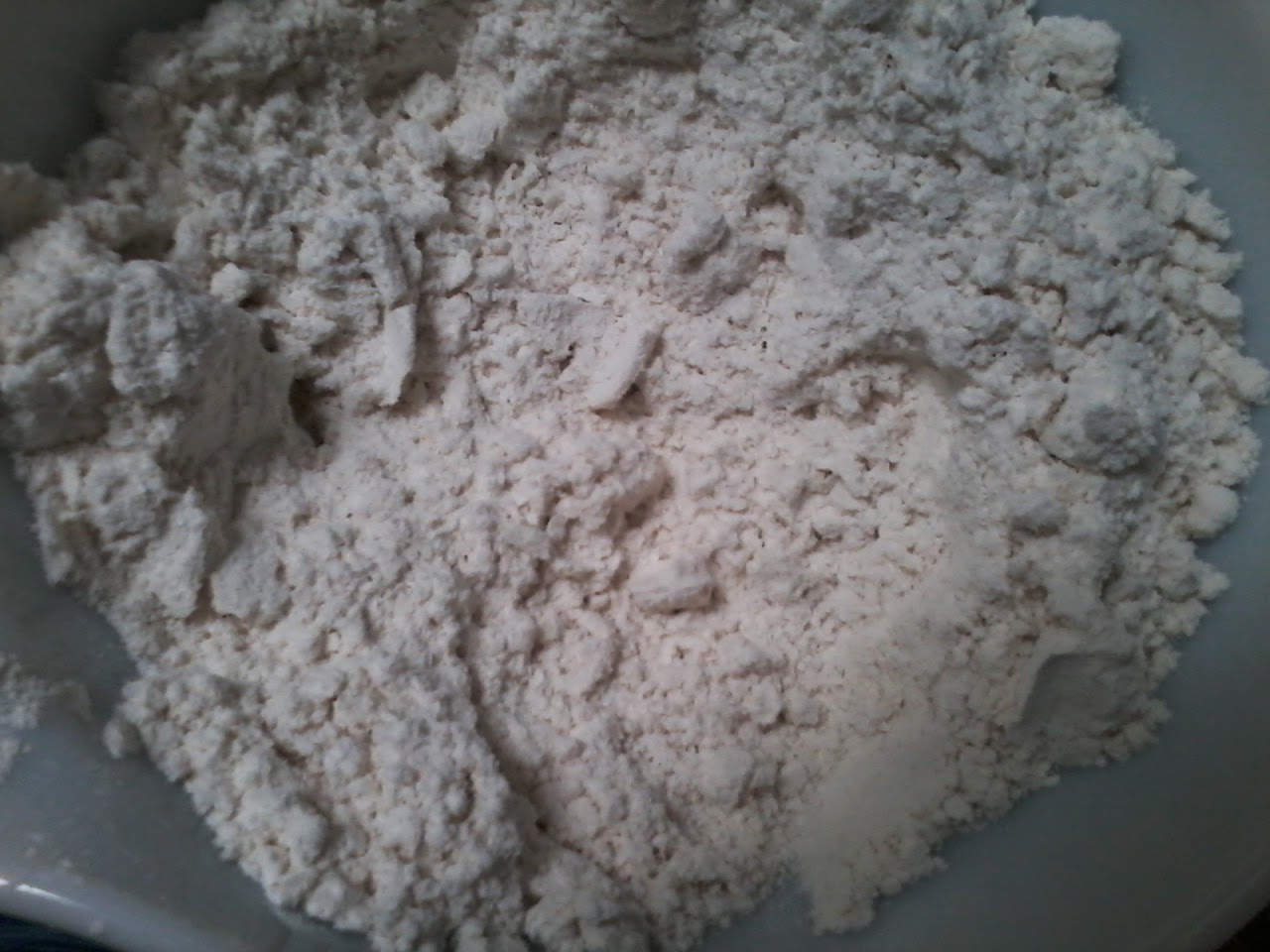 That got wrapped in wax paper and shoved in the fridge to rest and do whatever it's supposed to do so it becomes easier to roll out. Meanwhile, the modern instructions said to boil whatever giblets I use "for several minutes." A suggested time or sign of doneness would have been nice.
All right, a brief detour. I'm not going to launch into an overview of Roman cuisine, but I will say that an awful lot of the recipes call for various animal organs. I don't mean they say things like "the organs will do if the meat cannot be used," they specify which should be used where. Relatively recent (as in 20 years or so) cookbooks still suggest using "variety meats" or "sweetbreads" to  stretch your budget. So I figured this recipe should be relatively easy to buy the meat for. Also, since I was already venturing into foods unknown, I figured I ought to really go for it and therefore use something besides the same ground meat that goes into everything.

Have you tried to buy liver lately? I'm going to guess no because none of the supermarkets sold any recognizable animal parts.
I even went to the really fancy one specializing in hard-to-find ingredients for fancy foods that has not just an in-house meat counter but a fricken butcher shop. There were none in the display, but maybe they have them in the back and were planning to, oh I don't know, grind them into sausages or something.

Me: "Do you have kidneys?"
"No, sorry."
(Being several stores into my search, I'm getting a bit astonished at no one having any, so this slips out): "What? Then who does?"
"I could special-order it for you..."

I'm not opposed to special-ordering things I really need, but I am not going to pay shipping and surcharges on a kidney.
Going to the Asian store, I did in fact find all manner of animal organs in the meat case, but they were shrink-wrapped into very large trays and the guys behind the counter would not divide any of them for me. And what if it turns out I don't like pig uteruses? What'll I do with the rest of the 1½ pounds of them?  So I ended up sticking to things I've heard of being used- they do steak and kidney pie in England, don't they? And... er, I've heard liver used to be common here? Therefore, I came home with those two.
By the way, I briefly considered taking a picture just to show I'm not making pig uteruses up but decided I did not want to be the person in the fricken grocery taking pictures of the shelves. However, for animals that have such large litters, they were really small.
But that aside, I'm trying to get over squeamishness over eating recognizeable animal parts, and figured grinding and seasoning the hell out of them was a good place to start. The last time I voluntarily ate liver was when I had my wisdom teeth yanked. The ensuing weeks prominently featured milk, Ovaltine, liver, and a blender.
I'm going to make a suggestion for anyone doing recipes involving turning whole pieces of fish into minced or ground fish. (Yes, I added fish. I kind of liked the "throw in a little bit of all the meat you'd have waiting to be used" aspect of this recipe so I pretended I had a lot of little meat pieces lying around from other things I'd made.) Do not do said mincing or grinding at the start. You will have raw fish radiating fish stink into the kitchen until you finally get around to using it. Just start cooking and don't even get the fish out of the refrigerator until it's time to use it.

Meanwhile, I couldn't get lovage so I used the suggested substitution of celery leaves. My sister-in-law got some celery for dinner a day ago and I snapped the leaves off and jammed them into a water glass before she used it.
Like the last time I made a meat casserole pie thing, I didn't realize how much a certain ingredient was used to excess until I measured it out. The original recipe doesn't specify an amount, but Ms. Giacosa thinks I should put this much in: 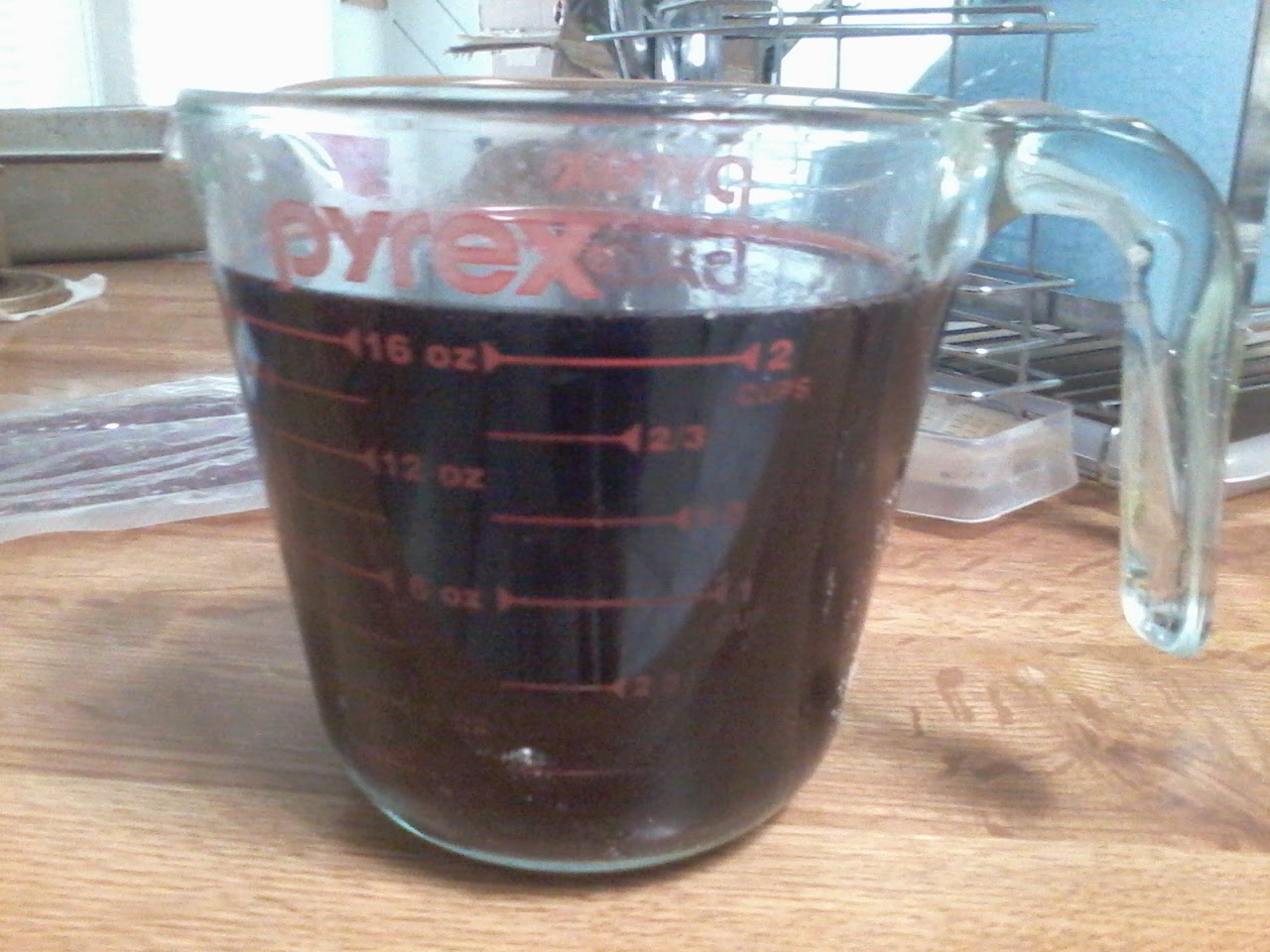 I will admit that this is the only substantial change I made to the modern recipe: it calls for one cup each of raisin wine and red wine. As logically follows from considering how many raisins one must use to make a bottle of it, raisin wine is really expensive. So I used red wine for the whole thing. I wasn't thrown by using this much of it at first. Another Roman recipe I've liked enough to repeat is chicken stewed in a covered pan of spiced wine. So I calmly dumped in the wine. It turned the eggs purple. 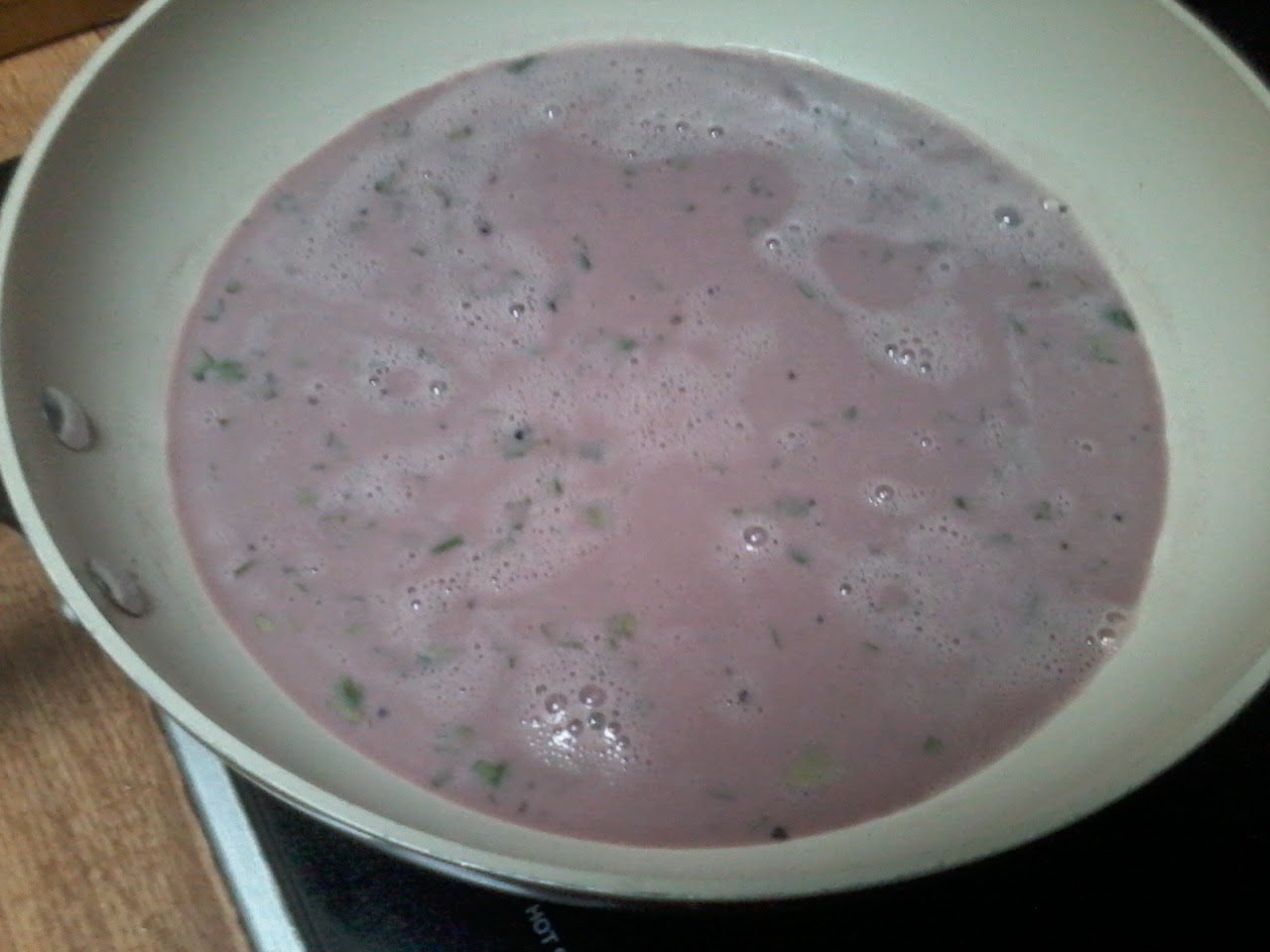 But this is where I start to get worried about the fate of my patina. The next step in the modern instructions was to add the meat and heat it up. It made sense- I figured this was to start the meat cooking so that it comes out of the oven fully cooked and safe to eat. However, I had made this little analysis before putting a pan of eggs, fish, and wine on the stove to heat. Have I mentioned the windows in the kitchen don't open?
At this point, I was beginning to fear for this creation. I felt strangely isolated. It's one thing to make food completely foreign to you- you can find books everywhere about it with pictures and detailed instructions to reassure you every time you wonder "Is it supposed to look/smell/taste like that?". But today we're making things that aren't just foreign by location but foreign by time. The one picture for this recipe (that was supposed to show the pan to use) is missing and there's no one I can ask "Does it usually look like this at this point?" So I proceeded on with nothing but one book to guide me through things the likes of which I've never made before which was too much for the one vent over the stove to handle.


I'd figured the crust layers would soak up the excess liquid and be sort of like a pot pie, but I had my doubts upon seeing how runny this was. Look at that layer of crust sort of barely floating there: 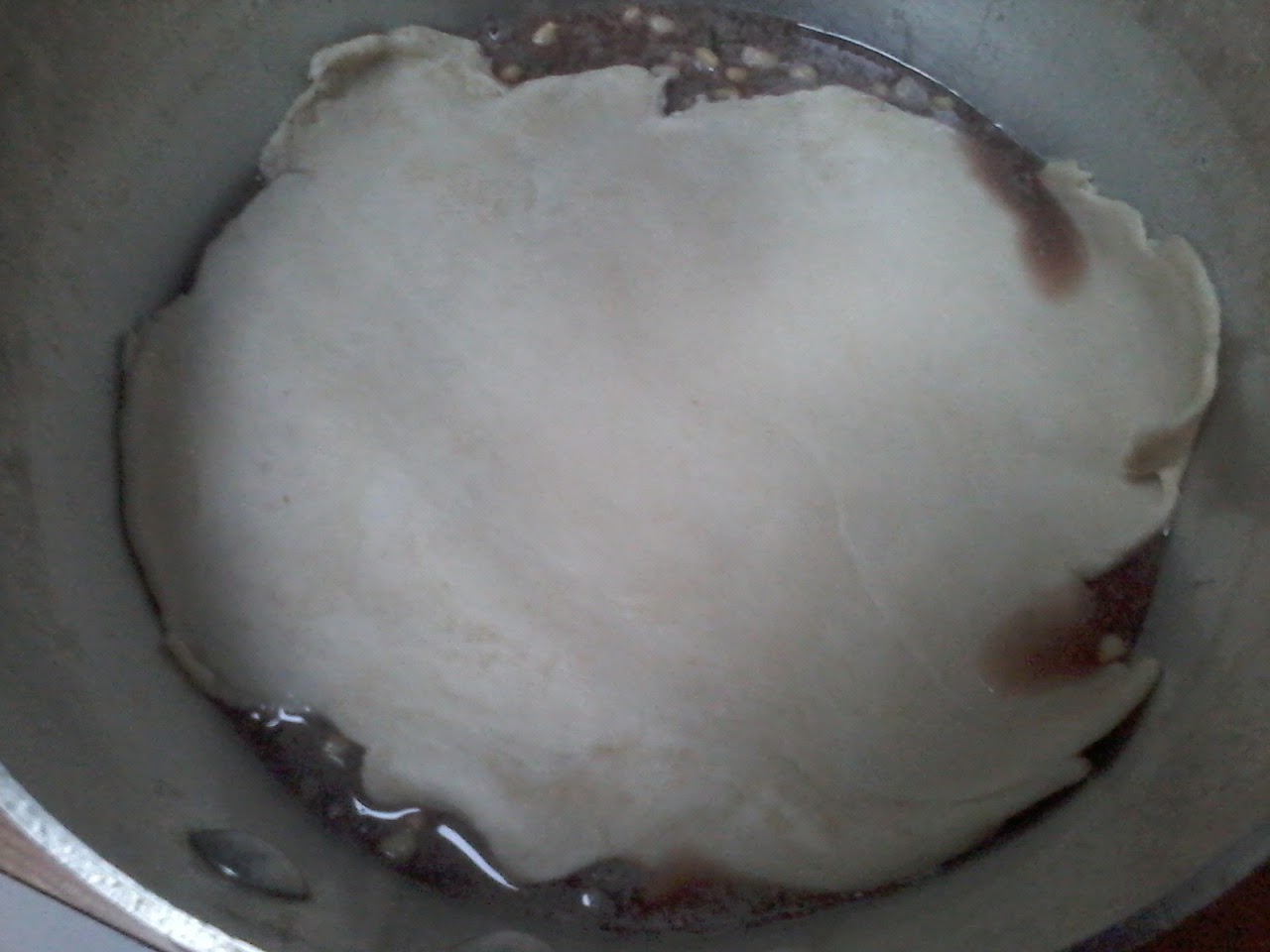 Sadly for my ancient Roman fantasies, it looked terrible, and the pine kernels I was meant to sprinkle over it made it kind of unnerving. It looked like something was breeding in the fish wine. 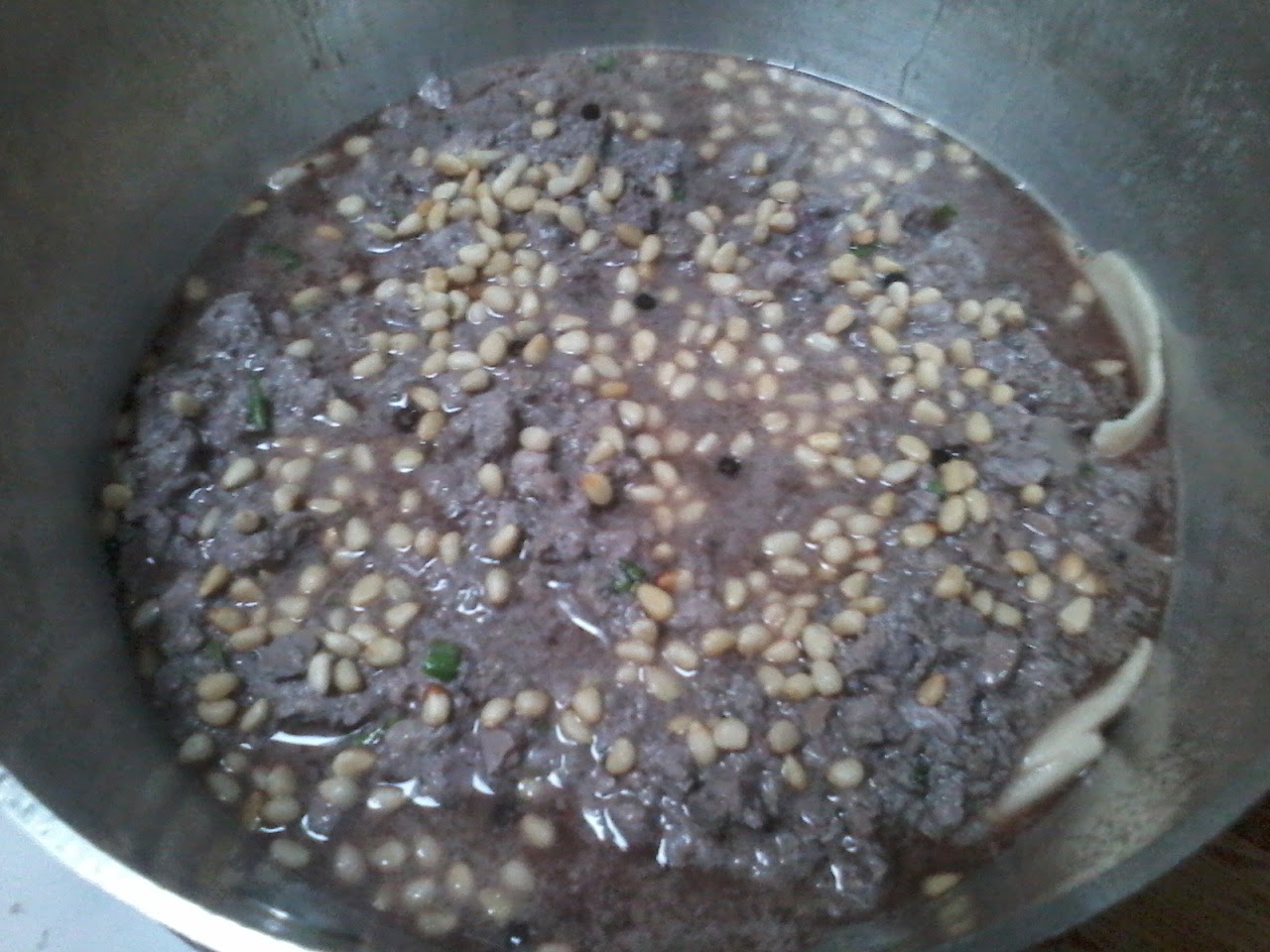 Incidentally, refrigerating crust makes a lot more difference than I thought. I went from barely being able to lift a two-inch piece off the counter to dangling the dough over my hand like so:

Despite the unnerving smells in the kitchen, I thought the crust-making was absolutely spiffy. I even did the fork-piercing of the top layer while it was still on the countertop and could stretch it to expand the holes without it ripping! 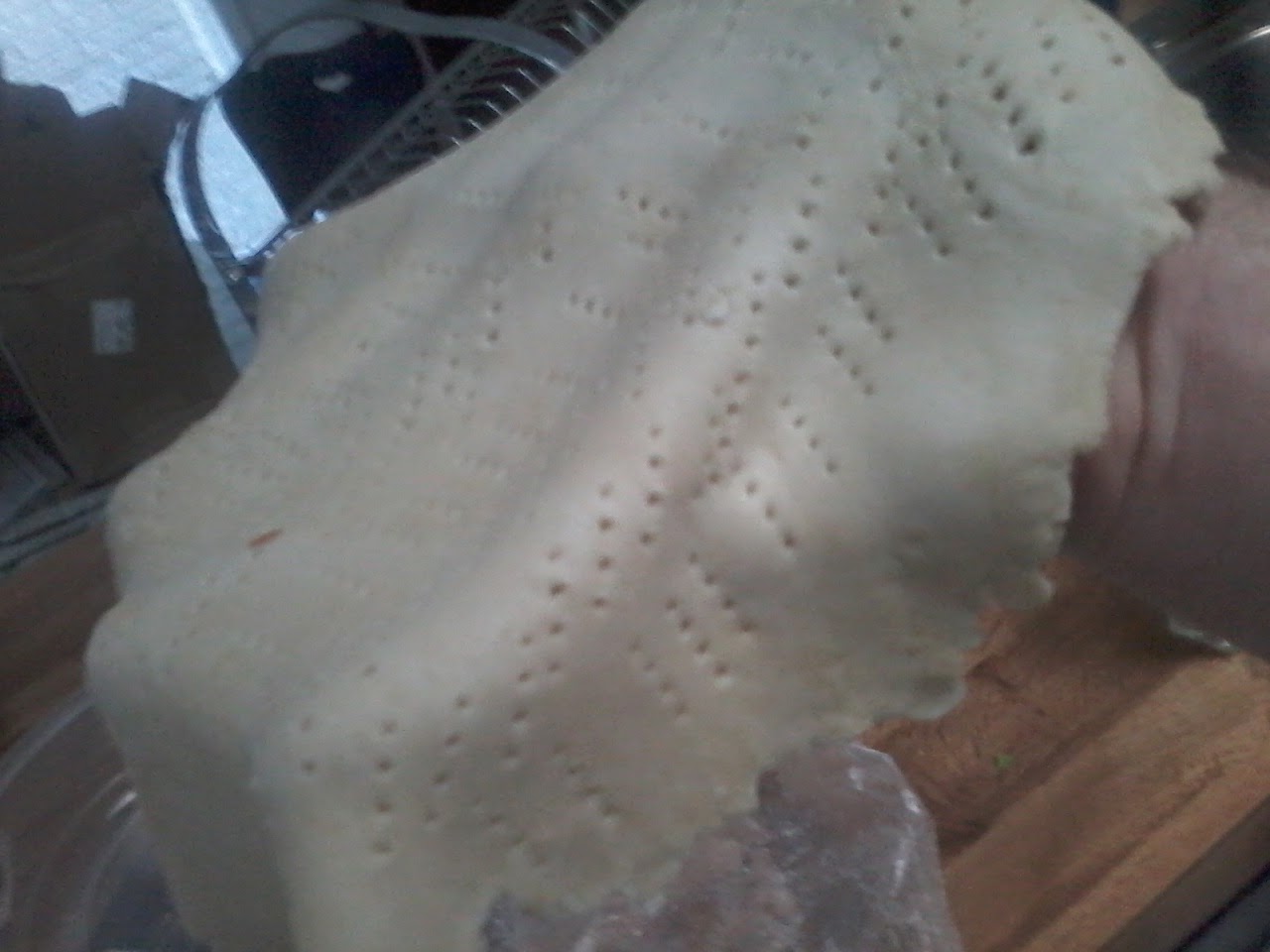 However, my brief period of "Yay this works!" happiness ended when I had to put the top layer on and then get the whole into the oven. The recipe calls for 30 minutes at 400°, but being somewhere between cautious and paranoid about raw meat, I let it bake a lot longer and only removed it when a meat thermometer said the chicken (which has the highest cooking temperature of everything in there) was done.
The wine gravy had boiled up onto the top crust and dried there. Usually it's appetizing when all the lovely things in a casserole have welled up through the top and left deposits of tastiness on it, but somehow this looked...off.


I tentatively stuck a spoon into the edge and tried it. It tasted like solid wine. Even the fish (whose smell still hadn't left the kitchen from making this) wasn't perceptible. Maybe the raisin wine which is supposedly sweeter would have made a difference. Maybe, as my mom suggested, it would have tasted different to people who drank wine like we do water. But I'm more inclined to think that Ms. Giacosa got the measurements wrong. It doesn't make sense to add any of the other seasonings if you're going to put in so much wine you can't taste any of them. It was near-inedible to anyone who doesn't really love wine.

And so, this was discreetly consigned to the trash. However, I'm still up for trying it with less wine. Also without the fish until I get the amounts right- I don't want that smell in the kitchen unless the finished food is worth putting up with it.