Florentines, or Inadvertently Stepping All Over English Culinary Tradition

Guess who still has kidneys in the refrigerator from a Roman wine casserole!
Me, that's who. And while I might be inclined to chuck them out and pretend that offal never happened in my food, we're instead going to make something comparatively modern with them!


A Florentine of Flesh.Take the Kidneies of Veale and chop them very small with Corance, dates, sinamon and Ginger, Sugar, salt, and the yolks of three Egs, and mingle altogither, and make a fine paste with yolks of egges, and butter, and let there be Butter in your dishe bottome, then drive them to small Cakes, and put one in the dish bottom, and lay your meat in, then lay your other upon your meat, and close them togither, and cut the cover and it, when it is baked then strew Sugar and serve it out.

Don't you just love how the spelling isn't even consistent in the same recipe?
My take on this *:


Note: I said comparatively modern. Just like Cleopatra's reign is nearer to our time than to the building of the great pyramids, so too is this recipe nearer to now than when Apicius was dumping wine into patinas. But you know what? I don't want to actually face the kidneys, so why not make the crust first?


The last time I tried resting and refrigerating the dough first, it worked better than I could ever have hoped. Seriously, that dough was sturdier, more flexible, and all around better than the ones you buy, much less the crumbly ones I've been rolling out all this time. I don't roll out a pie crust so much as flatten the dough and make a pie pan-sized patch job. So, assuming the refrigerator has magic fairies who bespell pie crust if it sits there long enough for them to find it, I bagged it up and put it in! No more patchwork pie crusts! Ha!

I still didn't want to get out the kidneys (they look like animal parts and I don't care that I'm revealing myself as a ninny about this). Therefore, I decided to spend a really long time making sure I had everything else just so (let's never mind that I forgot to add the salt).
I'm always somewhere between surprised and amused at how many old Western recipes require a trip to the middle-Eastern grocery store. In the past, I've gotten things like verjuice, asafoetida, fish sauce, and rose water (which shows up in a lot of desserts up to at least the mid-1800s). Today, it's ginger, dates, and kidneys. We'll get to the latter one later. Granted, I have seen dates for sale at most stores, but they're boxed like super fancy foreign delicacies and priced accordingly. The same goes for ginger. I never bother with powdered ginger; I've dumped so much into things I may as well have used a measuring cup instead of a spoon--- and still not been able to taste it.

I'd picked this recipe out as an interesting way to use up the remains of my Roman failure, and figured either this would be my supper or I'd end up getting dinner out of the microwave. It occurred to me as I was getting out the other things-- I think this is mincemeat. Why the heck are they calling it a florentine? Am I seriously about to make mince pies? After all my ranting about Christmas starting earlier and earlier every year, am I about to make some of the inevitable recipes of a country I've never been to? Whatever, it's somewhere around 11:30 at night and I still haven't eaten.

The kidneys can wait because unlike last time I made a recipe that called for them, I did in fact find dried currants! Those would be the little black things on the plate. They are so tiny! I was really disappointed when I tried them though- they taste just like raisins. Now I know that next time I'm supposed to use currants to just put raisins in a little cup and scissor them to bits.

All right, we've put it off long enough. Time to open the refrigerator and get out the kidneys. I know it said veal kidneys, but the only ones I could find anywhere were pork. I do hope that isn't the ruin of me.
They were impossible to chop (they just slipped and slithered everywhere). A stick blender got involved. You know how sometimes what you're doing makes you question everything you've ever done to bring you to what you're up to at that moment?

Also, if you're going to use a stick blender on raw meat in a mixing bowl, set said bowl in the sink. Let me be the voice of experience here forewarning you of error and preventing kidney splats all over the place.
Anyway, time to add all the other stuff!

Maybe I was supposed to just use a little of everything, but I didn't. And honestly, it smelled... well, the meat was strong with this one, but on top of it was the smell of dessert. It was good, so I'd like to think I was doing this one right.
Then I realized I was missing something:

Yep, I nearly left out the one ingredient in this entire recipe that comes with an amount. I guess their purpose in this endeavor is to make them set.

All right, that's the florentine done. Now let's see if the refrigerator fairies did their magic on this pie crust like the last one!

The recipe says I should be encasing the meat between discs of crust by now. The phrasing's a bit tricky, but it looks like I should be making a few little pies and not one big one. Therefore, to the cupcake pan!

And here are my attempts at putting lids on top. While I had been planning for there to be vents on them, I'd hoped for something nicer than this. Thinking of how easy it was to mess with the crust for the patina, I'd actually imagined cutting out pretty designs. You can kind of see a progression as the dough gets less and less brittle, so maybe if I'd had enough to keep going, I could have started cutting out something better.

As I am presently without a meat thermometer and really not in the mood for getting sick off of an undercooked pig kidney, I baked this for 45 minutes. It probably was a bit too long, but I'm not sick and love staying that way. When it was done, it smelled like a kitchen when a big dinner is underway and the roast and the apple pie are both partially made.
When the time was up, I opened the oven and realized the pan will be soaking overnight.

And despite the butter I put in the dishe bottome, my florentines were not coming out. So I grabbed a fork and ate out of the pan. And...
It tastes like something you'd get cravings for. That's honestly the best way I can think to describe it. Meat taste under all the spices and raisins is unnerving at first, but I can definitely see how people would want this because they had it when they were little. And once you get past the "I've never had this before!" and "I don't know if this is dinner or dessert!" stages of confusion, this is really tasty.
It's really strange today because it's neither dinner nor dessert; it's kind of both but mostly neither. From what I've read, apparently main meal/dessert distinction came later in culinary history. The leftovers, scooped out of the pan, refrigerated well. Honestly, as weird as this was, I already kind of want to make it again.
And so, to close, here is the one that came closest to coming out in one piece: 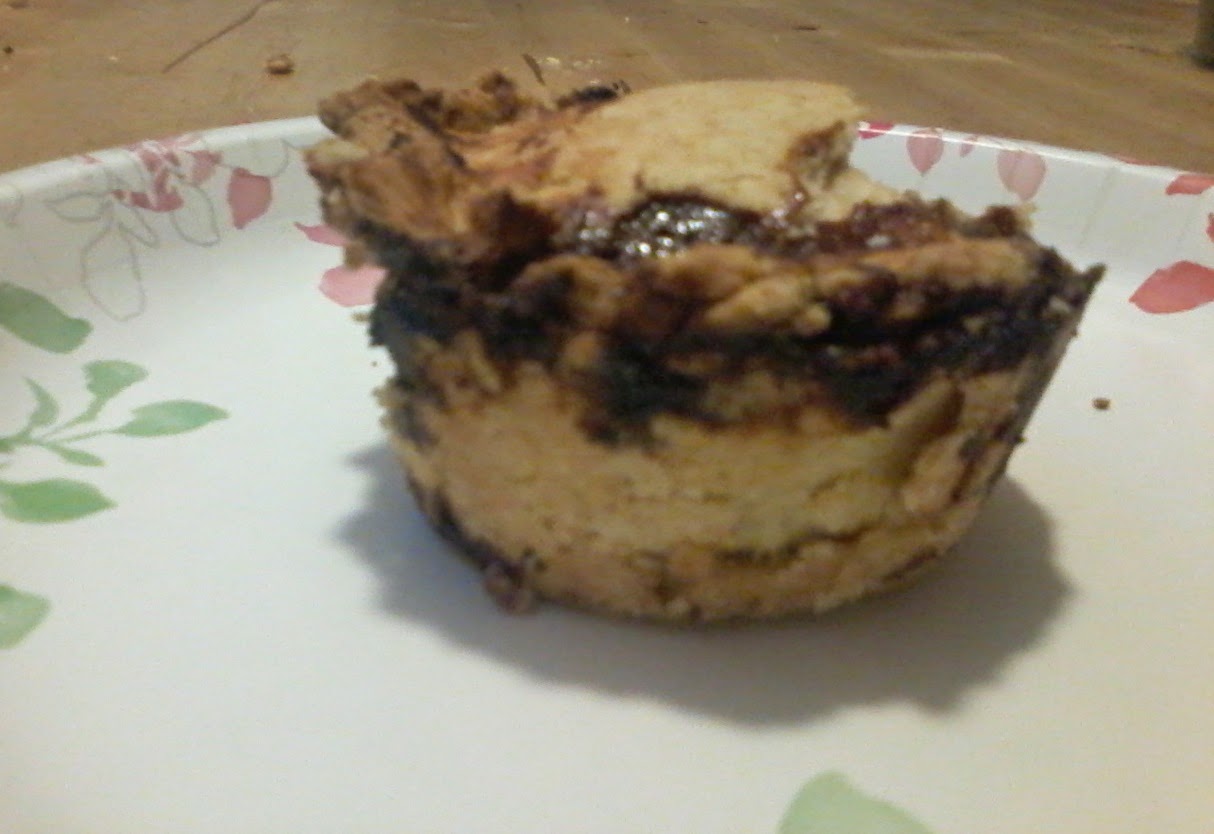 * We at A Book of Cookrye makes no claims to doing this in any way that even vaguely resembles "period correct." Even if we did have the requisite background knowledge, we don't have the kitchen supplies. Oh, and I just figured out how to make footnote links that jump back and forth, which is awesome. I am amazed at myself for making the arrow after this sentence take you right back where you left off. ⤴
Posted by S. S. at 1:11 AM