Baked Chicken from 1591 (with Surprise Mincemeat!)


Today we have something really special- a recipe from the cookbook I named this for! You may be wondering "Whyever did you name this for a random old cookbook?" I shall answer: When I decided to write a blog, I had no idea what to name it and went with the closest cookbook at hand when I had to come up with a title.
I love reading really old cookbooks- food from the past is often as foreign as food from the opposite hemisphere.
I've made a few recipes out of A Book of Cookrye, and have found the results very good (but like I said, the taste is so different you have to taste it with the same open mind you have trying foreign food). However, you do have to allow for changes in English when reading the recipes- for example "To boyle a Cony with a Pudding in his Belly" would today be called stewed stuffed rabbit and does not involve injecting the stomach of a rabbit with custard. Similarly, Farts of Portingale (you know that one's coming up) today would be Farts of Portugal.

Today, we present this:


To bake Chickins.
Season them with cloves, mace, sinamon ginger, and some pepper, so put them into your coffin*, and put therto corance† dates Prunes, and sweet Butter, or els Marow, and when they be halfe baked, put in some sirup of vergious‡, and some sugar, shake them togither and set them into the oven again.
Bake Sparowes, Larkes, or any kinde of small birds, calves feet or sheepes tunges after the same manner.

*Coffin: Free-standing pie crust. Some brief reading told me that instead of using pans, English cooks used to encase everything in a crust- sometimes it was an inedible container, other times it was meant to be eaten.
† Corance = currants. Many words are easier to figure out if you read them out loud.
‡ Vergious = verjuice: juice of unripe grapes (at the time, it also came from unripe apples). Used waaay back in the day to add a sour flavor to foods.

-A Book of Cookrye: Very Necessary for All Such As Delight Therin, 1591


And here's how I had at it (obviously, we're not going for authenticity):

I'm not gonna lie, I was really excited by this. I've never had chicken seasoned like this or stuffed with all this dried fruit. I had no idea what to expect. So herewith follows my experience making this!

First, I tell you I spent forever trying to find verjuice. The stuff was used practically as often as salt back then, and these days no one has even heard of it. I looked up online and saw a few people selling it for embarrassingly high prices, and someone suggesting you call some wineries to ask if they sell it since they usually thin their grapes before they ripen. Purely for the heck of it, I went ahead and called every winery within about 2 hours' drive to ask if they made verjuice. Responses ranged from "Sorry, we've never heard of it" to "Is this an obscene phone call?"  One woman sympathetically explained that given the drought we've had, they were "using every grape." Then I happened to see this when I was at the middle-Eastern supermarket:
I was embarrassingly excited to find the one ingredient I've never found for half the recipes in this book, snatched a bottle off the shelf, and decided to make this chicken.

I've tried using vegetable peelers and paring knives to peel ginger, but the best thing I've used is a cheese grater.
However, I didn't feel like bothering to grate the whole thing, that gets tedious and finger-nicking. 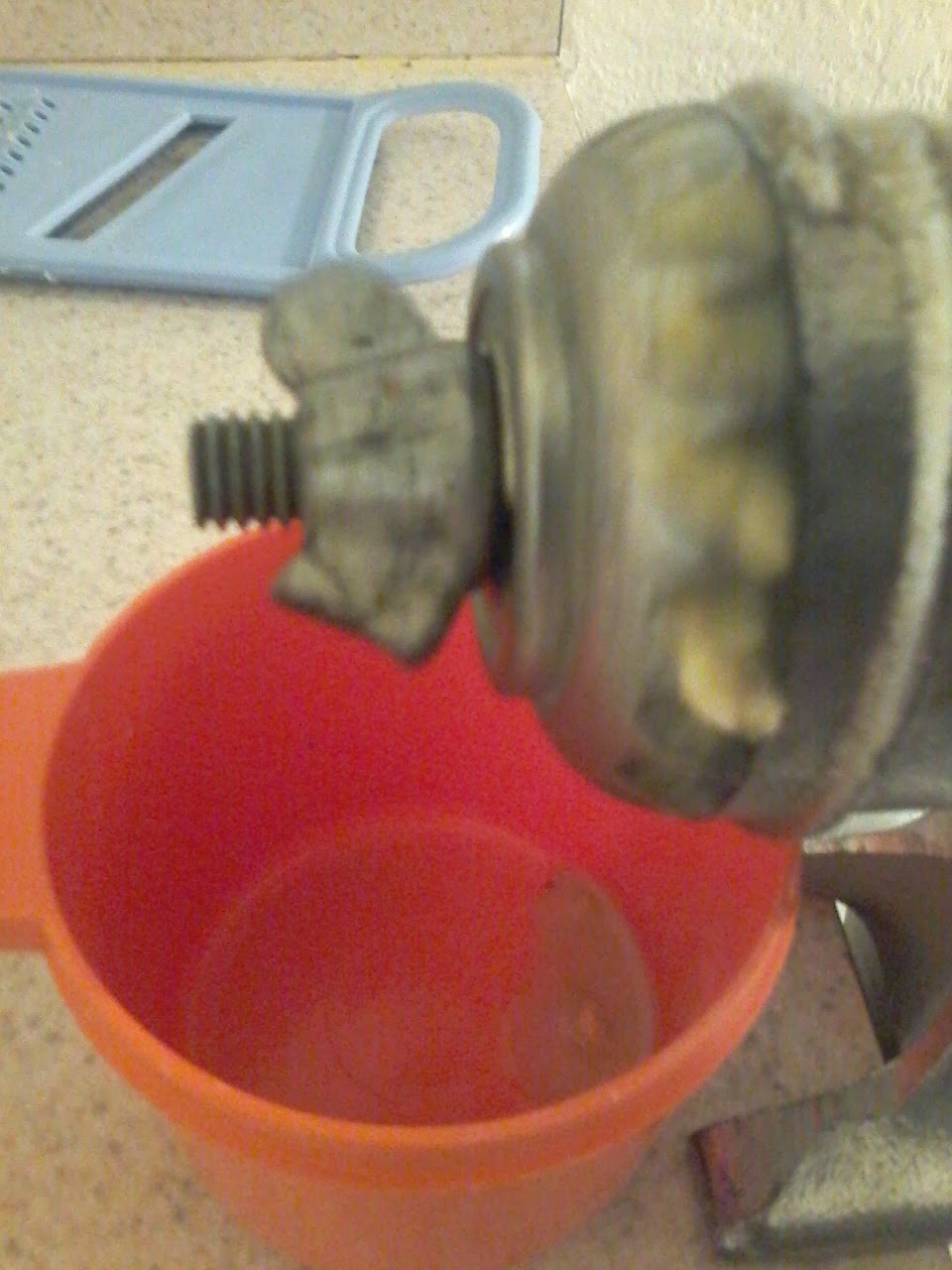 Now, to dump in a bunch of spices! 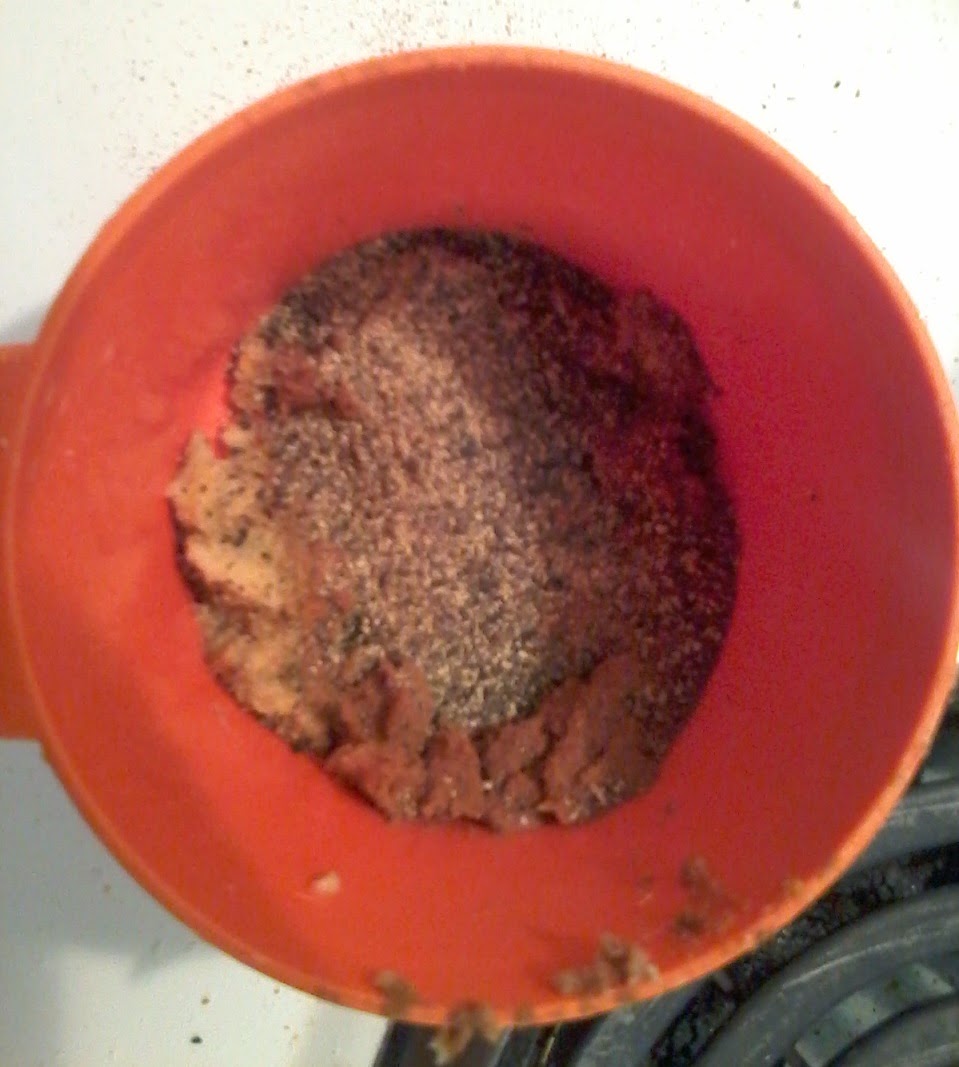 I was a bit afraid I hadn't made up enough spice paste, but didn't feel like running out to get another ginger knob. 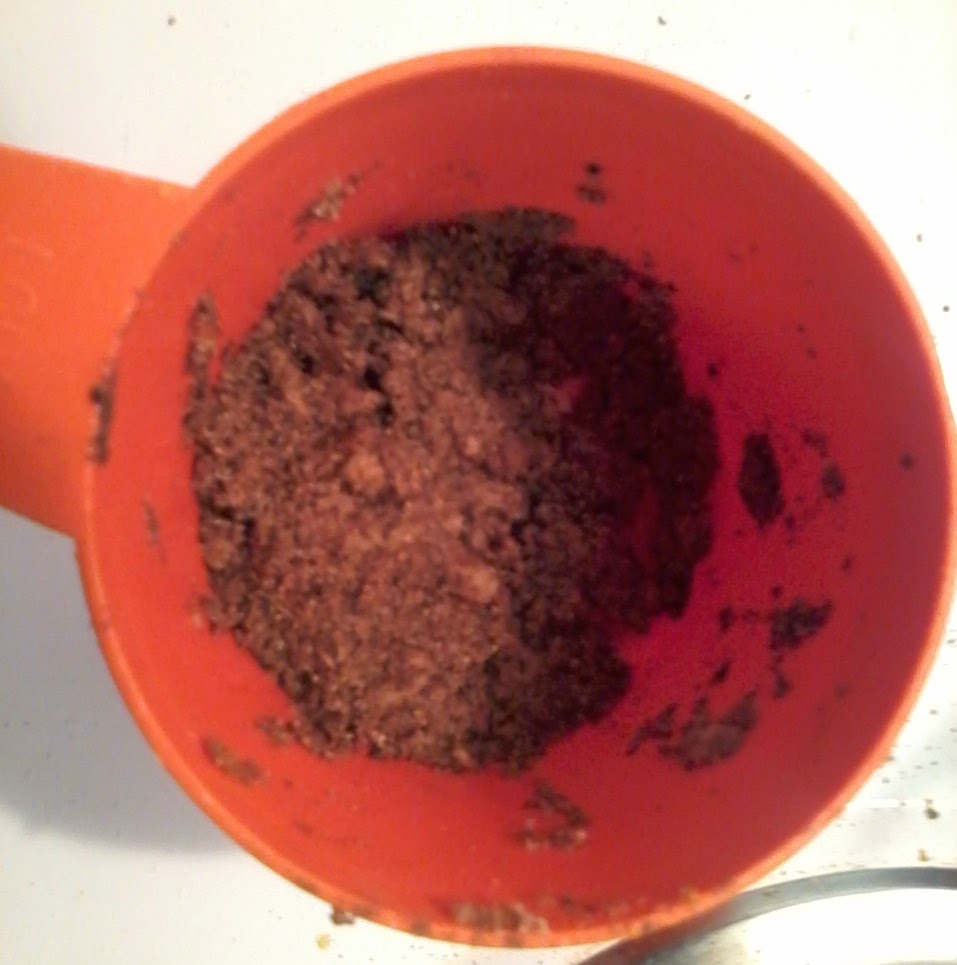 I set out dates and raisins so I wouldn't ruin the rest reaching into the bag with chicken hands. I mashed and pressed the fricken dried fruits in and realized that I had overestimated the chicken's capacity. Afterward there were still this many on the counter:
Someone dumbfoundedly watching me shove raisins up a chicken asked "Are you sure that counter's clean?"
I answered "Eh, they're going up a raw chicken anyway."
And since I'd gotten icky raw-chicken hands all over them picking up handfuls to shove up the bird, I decided that rather than throw the rest away, I'd do just like I did with the mushrooms and shove them under the chicken's skin.

A quick rub with the butter, then with the spice paste (why didn't I just mix the two?) brought us here.
And now, reposing in a covered casserole after being very violated with dried fruit, it bakes. After a while, the kitchen smelled like I'd detonated a Christmas shop in the oven.
I thought it odd to make syrup for a baked chicken. Then I realized that some barbecue sauce is practically as sweet, and we pour that all over meat without thinking anything of it.

And here we are, syrup poured halfway through (okay, so I poured it on 30-45 minutes too early),
baked, and ready to eat!
This is one of the scarier-looking baked chickens I've seen. One leg and both wings fell off as I lifted it out of the saucepan roaster, which I took as a good sign of how tender this was going to be. This is the bird fresh out of the roaster before I even touched it with a knife:
Does anyone else think it looks like a gigantic beetle has landed on it? Between the last chicken having a horrid mythological disease and this one spontaneously turning into a beetle, I think we can safely establish that if you stuff things under a chicken's skin, it's best not to let anyone see it until you've got it carved.

And now we finally reach that magical moment, when we put it on a plate and get ready to be wowed!

I took a bite and... well, it tasted like baked chicken. It's definitely a good baked chicken, but I'd really been hoping all those other flavors of the raisins, dates, spices, and verjuice had gotten in there a lot more. It was delicious, but anticlimactic. Maybe I should have baked it backside-up so the breast meat would be immersed in the pan sauce. The sauce tasted like something off a Christmas table, but it went well with the chicken so I dunked each forkful in the sauce.

Then it occurred to me... meat, dried fruits, all those spices (which definitely flavored the fruit if not the chicken), I think this is could be where mincemeat comes from. It's easy to imagine the cook chopping up the leftover chicken, mixing it with whatever fruit remains, and pouring some form of alcohol on it to make it keep.
Or was I supposed to chop up the chicken meat to begin with? I mean, nowhere did the recipe say that it was supposed to stay whole. Recipes this old often leave out instructions like that assuming that the cook would have known. Elsewhere in A Book of Cookrye a fish recipe lists everything for the stuffing and seasoning and doesn't tell you to get out a fish.
Since the chicken really was best swimming in the pan gravy, so it shall be.
I poured off the pan gravy and refrigerated it long enough for the fat to solidify so I could just lift it off instead of tediously spooning it up while it was still liquid. The next day I threw out the fat, chopped the chicken, sliced the dates (the raisins were already small enough), and mixed all of it up with the pan gravy. It's really good, but the sauce was hardly thicker than water (you can see it puddling in the plate). If I make this again (which won't be unless I see dates on special) I'll add something to thicken it. Also, I may or may not have upended my plate and drank the sauce (seriously, it's that good) when I finished the food on it.
It was better after a night in the refrigerator. The only thing is when I'm cutting up chicken there's always little bones I miss and then find midbite.
All in all, this was surprisingly normal yet delicious recipe.
Later I was thinking, the chicken-pieces-in-syrup I ended up with is a lot like the chicken in Chinese restaurants; maybe next time I'll fry the chicken like they do and see how that comes out...