Today, I'm pleased to announce we have a special feature! Yes, yes, yes, just like one of my favorite food bloggers (that's RetroRuth over at Mid-Century Menu), today we have actual photographic evidence of someone else eating my food! For you see, today I was cooking with a friend. Well, I did most of the work, but that's fine because he has Men in Tights on his laptop (Mel Brooks is one of my favorite directors ever).

We started with a recipe from the same cookbook as the booze brownies (which are definitely worth making again) and made it into something absolutely divoon!


I could bake these as normal, but that would mean I don't get to use my awesome vintage waffle iron! Behold!
I love this thing. I found it in an antique store with no price tag. It was missing the little screws that hold the grids in place (easily replaced at a hardware store) and the power cord (also, hardware store). I asked how much it was right as the owner's dog randomly came around and started jumping on my leg to be petted. I think the fact that their dog liked me had more to do with the insanely low price they gave (two dollars) than the missing bits.


Also, we went to the Asian supermarket the other day and got these candies:
I'd thought they were soft candies. Does anyone else think the one in the picture looks like it's supposed to be chewy? But they were good enough to not throw out- they tasted like super-sweetened iced coffees from a doughnut shop. After eating quite a few of them, we decided the rest could go to a higher calling, which brings us to making cookie dough!

I used to buy shortening in sticks because I got fed up cleaning out the measuring cup afterward, then I read about the displacement method. It works like this: 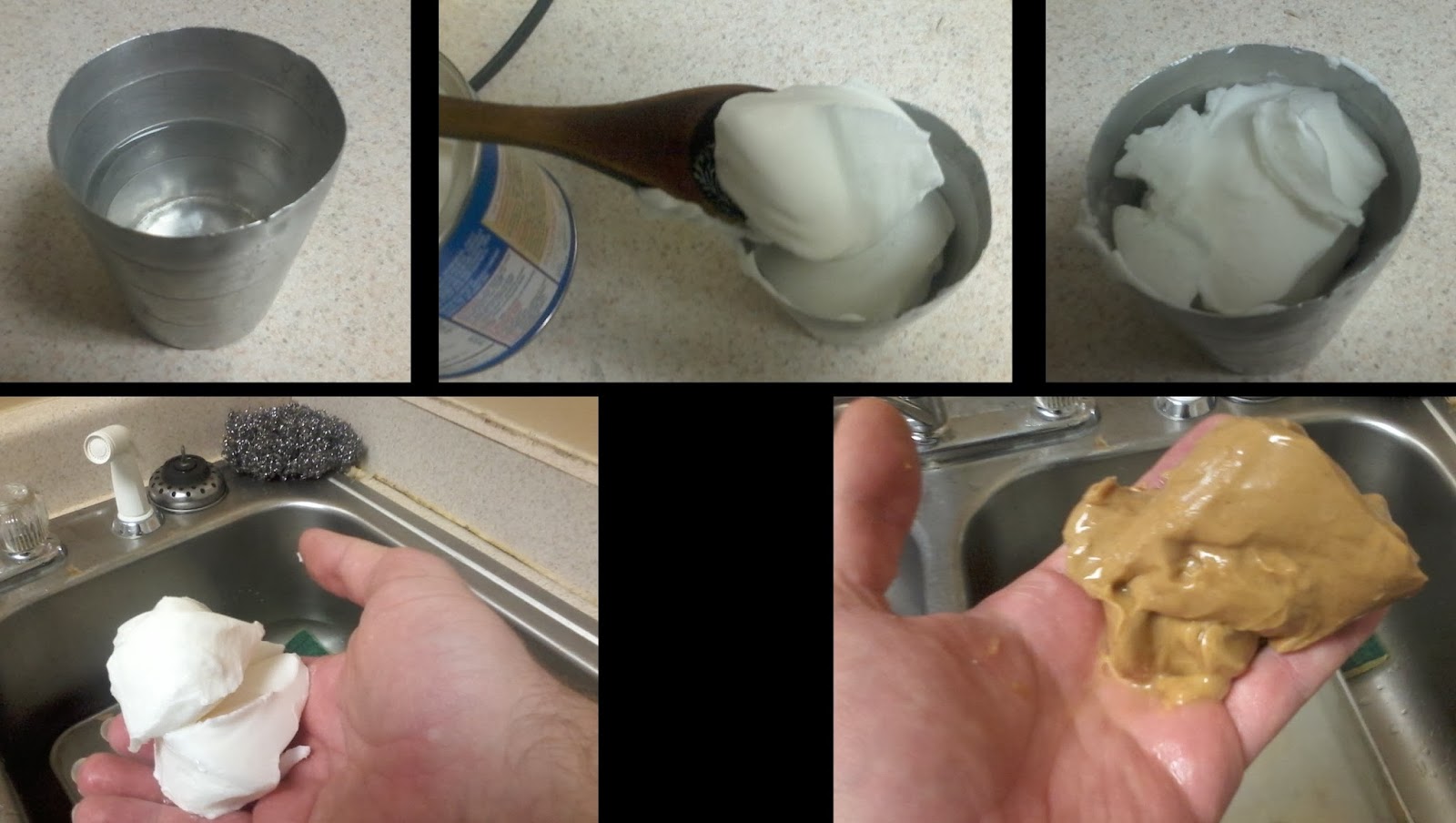 1. Put ½ cup cold water in the measuring cup.
2. Put in shortening, being sure to leave it kinda floating loosely in the water. If you pack it down it'll probably stick to the sides and defeat the whole purpose.
3. Keep adding shortening until the water comes exactly to the top.
4. Drain the cup over your fingers. Congratulations, you now are holding ½ cup of fat! There's no need to worry about whatever water-drops are still on it.
5. As you can see, it works with the peanut butter too.

Peanut butter cookies seem at first to be relatively healthy as far as sweets go. I mean, they've got something in them besides butter, sugar, and flour. Peanuts are good for you (I think). But then you start with the mixing of the shortening and peanut butter, and realize you have basically a big bowl of fat.
Since I am adding ½ cup each of brown and white sugar, I decided to be lazy and only measure once.

And this is when the dough starts to look good. If you beat it really hard, the sugar grains break up any little shortening lumps that remain. They also break up the eggs which you will add next.
Now I know that recipes often call for mixing the baking powder etc into the flour before mixing it all in, but that requires getting out and then washing another bowl. Since I have neither a dishwasher nor hired help, I instead put in the baking powder, baking soda, salt, and whatever else I'm supposed to use a spoonful of into the bowl and thoroughly mix it in. Once it's definitely mixed well, I add the flour and have one bowl fewer to clean.

And now I have this marvelous bowl of cookie dough!

Ordinarily I would have baked it, but today we have coffee candies, a waffle iron, and a meat grinder.
Roll your sugared dough balls kinda long, like you're starting to make a snake with Play-Doh. Pat them a little bit flat, and it's ready to go!

But seriously, these things stick like crazy. I spray the hell of my waffle iron for this just to be sure. There were puddles. It may seem like overkill, but have you ever tried to clean out a fricken waffle grid? Spray it, spray it, and spray it some more right before you put the dough on.

These were done in 45-60 seconds. And this is the beautiful unveiling!
I can guess what you're thinking: "You burned the hell out of those! What's wrong with you?" And I agree it looks like that. But what you're actually looking at is the sugar we rolled the dough in which has caramelized.

But you can't really lift these out- they crumble as soon as you try to stick a fork handle or anything under them. So I set out a paper towel, took the bottom grid out of the iron, and tipped it out. It is a really tricky operation to hold the damn thing up by the very edge with a hot pad (by which I mean paper towel wad because I haven't got one) and lean it over without accidentally squashing anything. But I managed to while only nearly burning my hand once. After vigorously whacking the back of the grid with a spoon, they fell out really neatly.

As delicious as these are alone (and seriously they are, the outside is crunchy-caramelized and the inside is deliciously soft), today we're going to do something really special!


Marcus had been unwrapping the candies (I call it shelling sprinkles). The things were in little pouches, not just twisted wrappers, so this took some time.
And to add sadness to drudgery, it turned out the freezer sucks.

But this brought us to one of the loveliest moments in the history of randomly pulverising stuff.
So, setting the ice-cream covered waffles to the edge of the plate so the sprinkles would land on them. Marcus cranked the grinder so I could capture this beautiful moment:

And now, as promised, here is Marcus trying this!


Though for the sake of disclosure, the waffle iron looked like this when we were done with the second batch:

And the kitchen... well...
But seriously, need I repeat how delicious this was?

Also, the next day I made cookies of the rest of the dough (tip: cheapskates like me also save the rolling sugar that's already got little cookie dough bits in it in the fridge).