You did know it's pi month, right? March 2014 AKA 3/14? In honor of the last day of the month, A Book of Cookrye is pleased to make pecan pie! And not just any pecan pie- we're going way back in time, all the way to before the Karo people got their hands on the idea.  Also, after the disappointing Crocus Carrot "Cake," I want good pie. Also, pecan pie just makes me inexplicably happy. No matter what's happened to try to ruin my day, pecan pie and only pecan pie make me feel all better. So when I'm making it in the middle of the night after a good day, the week gets a really nice start.

This is the original recipe I started from:

Texas Pecan Pie.
One cup of sugar, one cup of sweet milk, half a cup of pecan kernels chopped fine, three eggs and a tablespoonful of flour. When cooked, spread the well-beaten whites of two eggs on top, brown, sprinkle a few of the chopped kernels over. These quantities will make one pie.--Ladies' Home Journal.


I've made this before. You may have seen the picture of me slightly crazy-eyed while holding one.

I actually didn't veer very far from the recipe (aside from skipping the meringue)- all I did was put in more pecans. This pie is practically as easy as the corn syrup one people make these days, and (I think) a lot better.

Story time!
When I was a kid, we had a pecan tree that a previous owner had inexplicably cut off every branch up to about 20 feet over the 2nd story of our house. It looked like those trees you see in nature documentaries that the giraffes have been munching on.

My grandparents always came up to see us around the time its few remaining branches would drop pecans. My grandfather always showed us one of his "old Indian tricks" (this term despite not being part Indian). This one was how those without a nutcracker can set a pecan on the patio, tap each end lightly with a hammer...

...and the pecan would remain completely uncracked. But that's all right because you can tap it a little bit harder on each end...
...the nut will go straight from whole to pulverized and you can pick out the tiny pieces of nut meat while your grandfather said "Well, it did come open." It wasn't until I was 25 that I ever saw a pecan cracked with a hammer without getting smashed.
(On the small chance that my grandparents are reading this, Hello! Love you!)

This smells so good as it cooks, and the nuts flavor the custard as it cooks (that doesn't sound dirty at all at 5:30AM). You can even see it starting to get darker as the pecan flavor seeps out.

It gets a really nice brown, and I can't help tasting it as I'm stirring. 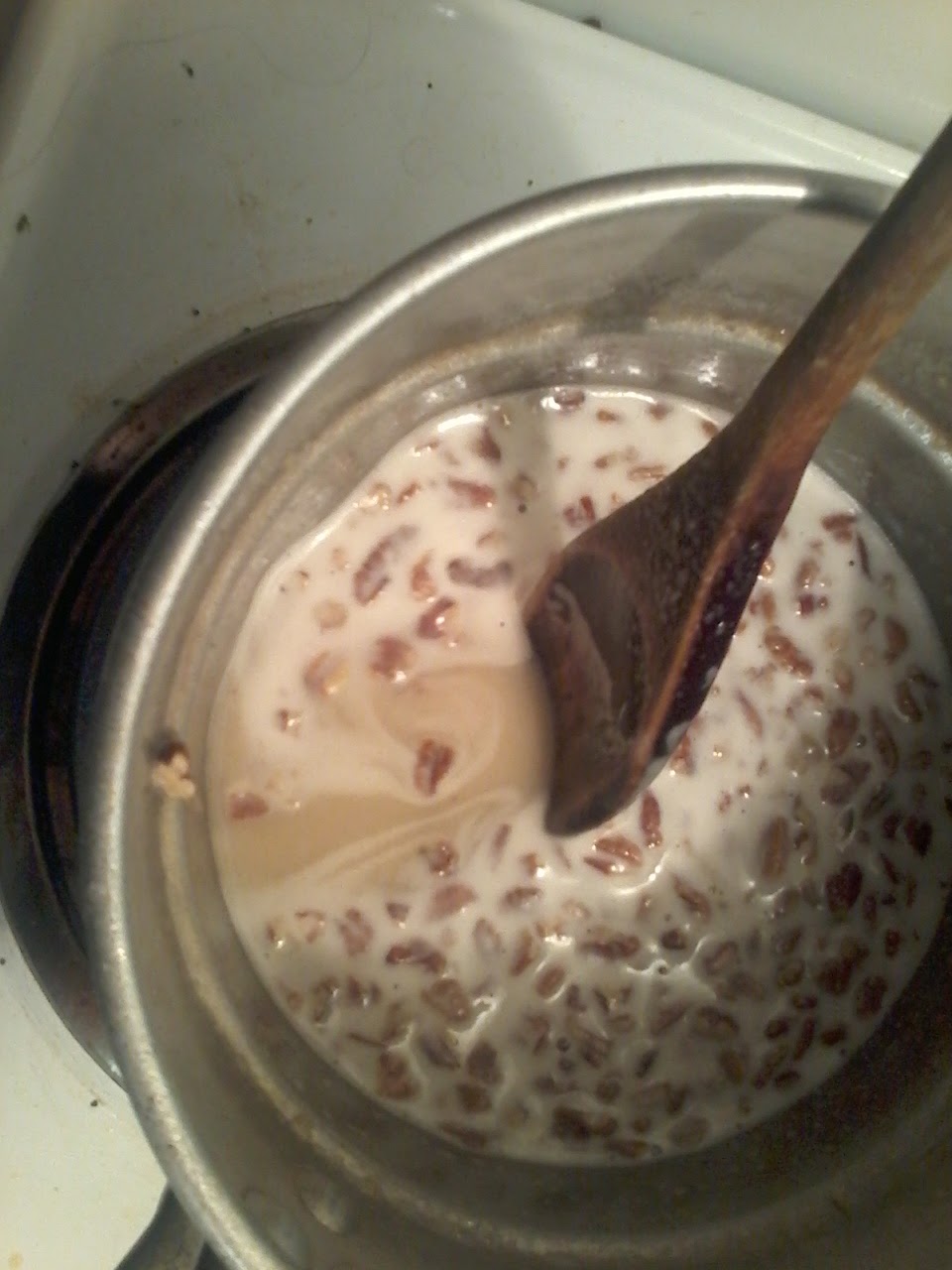 Finally, it actually gets thick enough to coat a spoon. Or, you might say thick enough to kind of hold a pecan piece onto the spoon. Honestly, at this point you could put it all in a bowl and put it into the fridge if you don't feel like doing a pie. It's seriously that good.
I think this one is a lot better with a graham-cracker crust than a regular one. For once, it's not just that I don't want to go through the bother of making an actual pie crust. The tastes really do go together better (but for this recipe you really do need to pop the empty crust in the oven and get it a bit toasted- it tastes so much better). A lot of people get finicky and try to measure the exact amount of anything when making them, and that's just boring.
So, I am pleased as present How To Make A Graham Cracker Crust, Book of Cookrye Style! 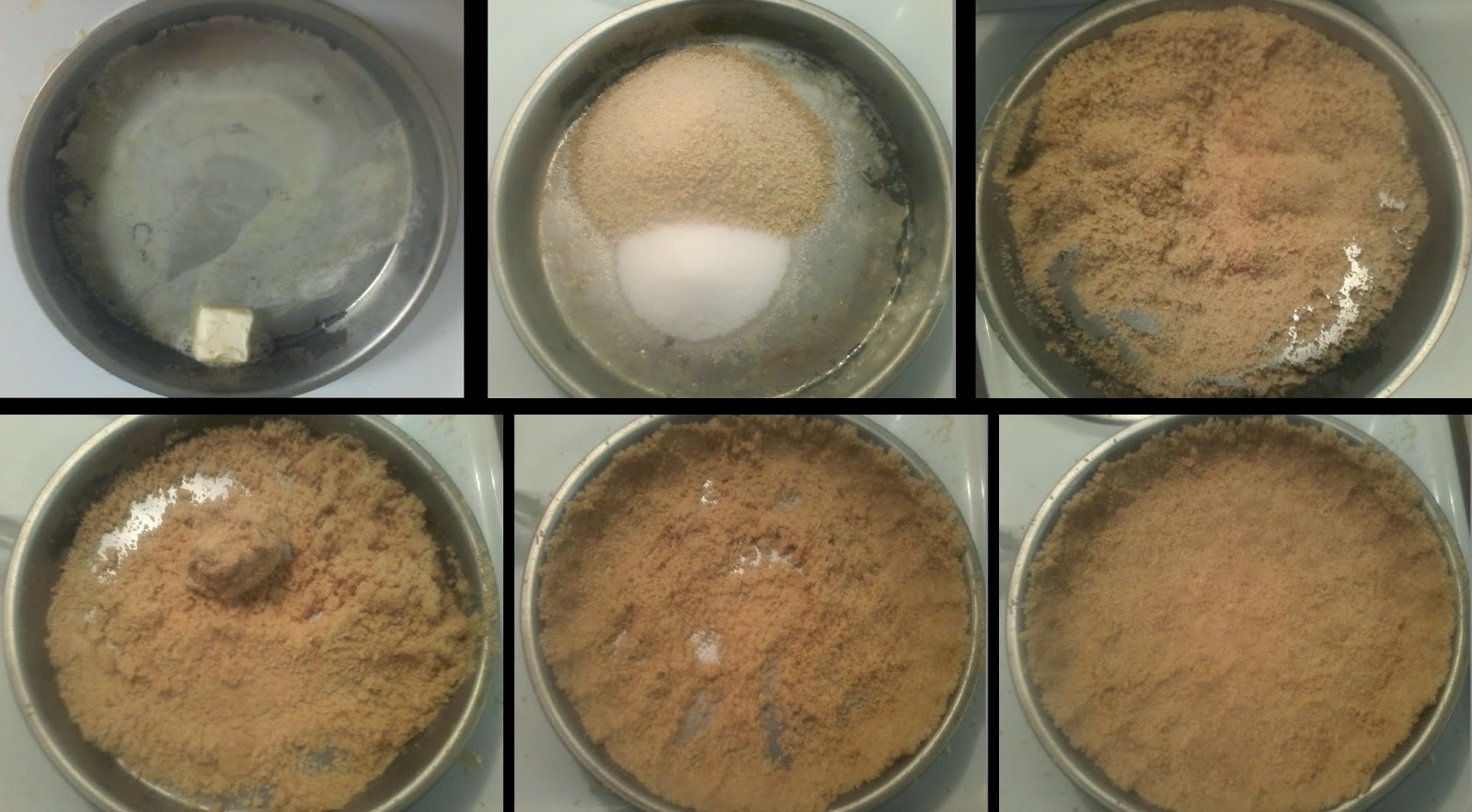 1. Put a lump of butter about (around half a stick or less) or so into the pie pan, set it right on the stove burner (those using glass can shove it in the microwave).
2. When it's melted, take it off and put in piles of graham cracker crumbs and sugar about this big.
3. Mix. Melt and add more butter if it's too sandy and won't hold together when you try, sugar if it's too bland, or graham crackers if it's too sweet (or if it's kinda sludgy).
4. When it's sandy but a clump holds together when you squeeze it, you're done.
5. Press a bunch of it onto the sides.
6. Press what remains onto the bottom, moving it around to cover any bare spots that remain.
7. Bake at 350° for 10 minutes or so, or just pop it in the preheating oven and take it out after a while.

After the pie filling goes right in the crust, I cannot recommend spit-polishing the pot and spoon enough. If your raw-egg worries have kept you from trying cake batter, cookie dough, and brownie batter, this is the recipe for you to finally experience the joy of smearing your finger all over the sides of the pot and eating what built up on it. The eggs are cooked, and it's delicious.


And here's the finished pie.

After I'd sliced it and carried it around a bit, some of the excess crust on the edge knocked off the sides and into the filling, which I thought made it look prettier. I might do it on purpose next time. 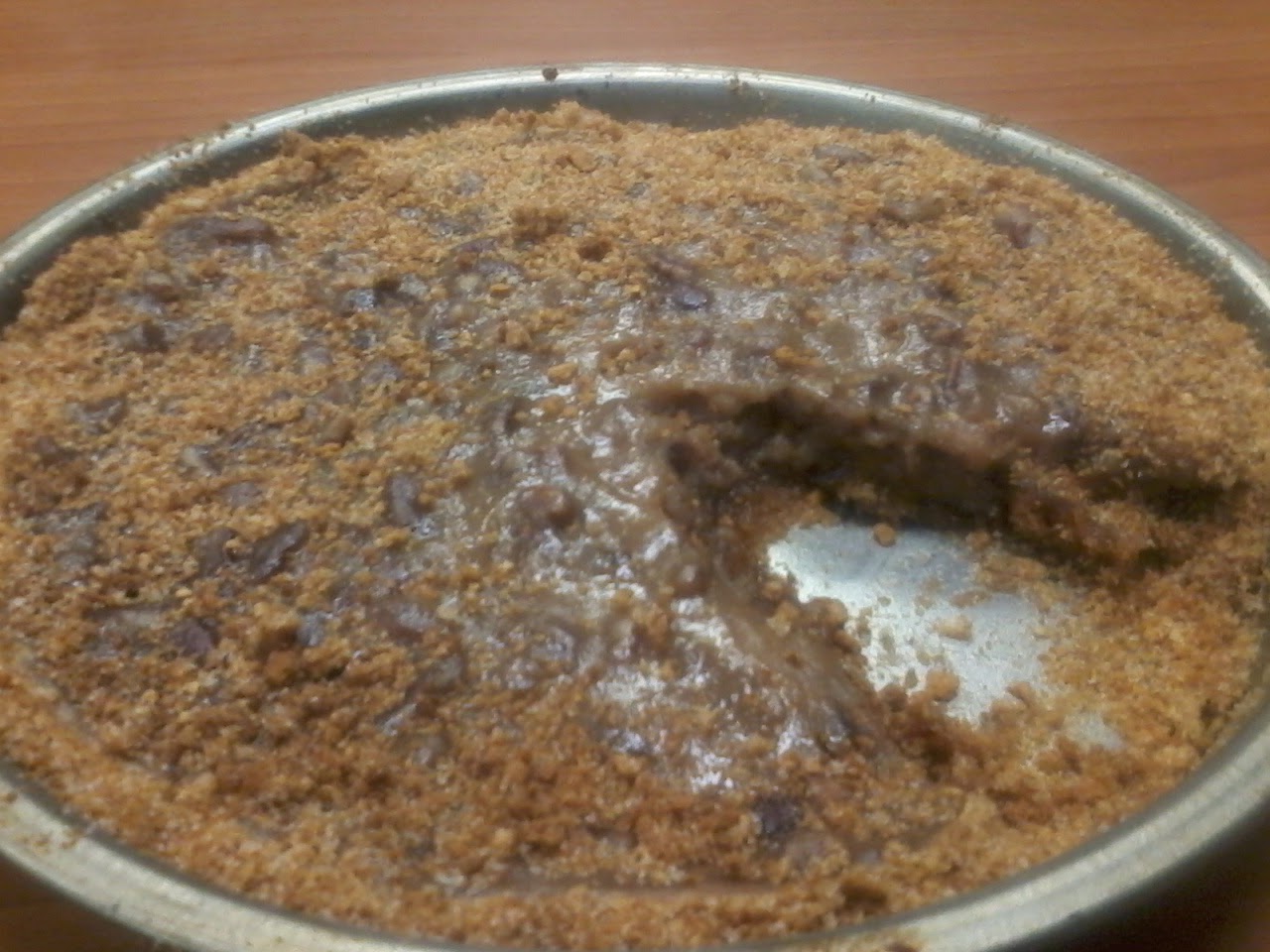