My design is to attack a vulgar Error, which has been prevailing for many Years, in Opposition to Experience, sound Reason, and practised Cookery: I mean the common Opinion, that those abstaining from Pasta, can replace it in all their Recipes with the cooked Flesh of that vegetable commonly called the Spaghetti Squash.
All right, I'm done misappropriating sentences from the works of Dr. James Augustus Blondel.

But seriously, I've seen dieter's sites and gluten-free sites talking about how you can just replace spaghetti with spaghetti squash and it's just so magic. They never mention that spaghetti squash tastes like (duh) squash. It's actually a rather sweet-tasting squash at that. Swapping it with spaghetti is like making a shepherd's pie and trying to top it with rice paste instead of mashed potatoes. It looks nearly the same, they're both mostly starch, but it just doesn't taste right. So unless you think your pasta bake would taste really good with a bunch of squash thrown in, you'll probably end up eating your spaghetti squash lasagna muttering to yourself  "Eh, it'll do."

But at this time of year, most vegetables are sad, out-of-season mushy, flavorless things. Squash is still reliably good. I decided to put it into a recipe I've had lying around for a while. Besides, after the awesome fun from last time, it's time to make something that at least sort of qualifies as good for you.


I adapted it from The Art of Italian Cooking by Maria lo Pinto (my copy's so old it was originally priced 35¢). Here's the original recipe: 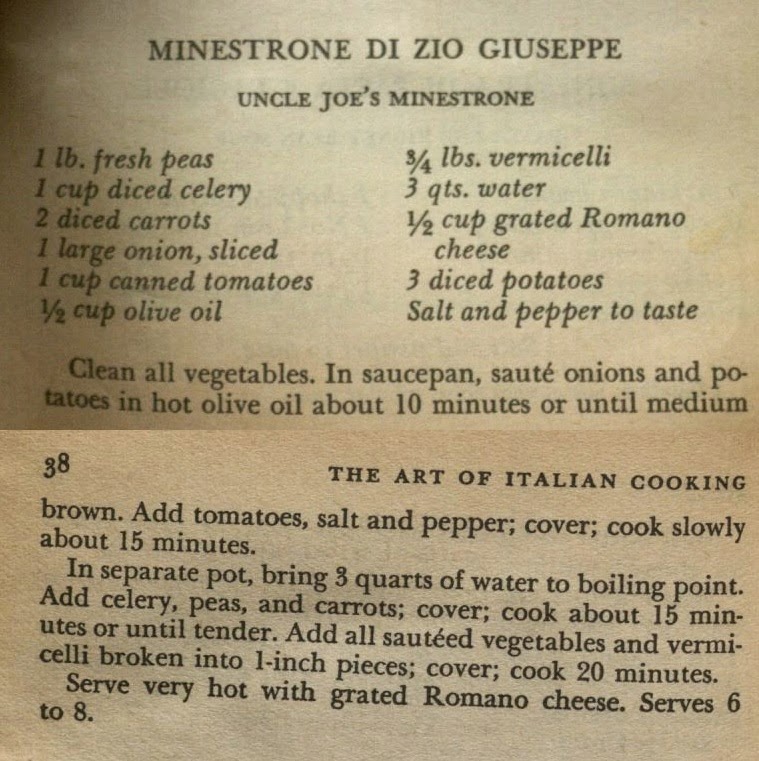 That's a lot of soup. Since I don't have that many people nor do I have a pot that'll hold so much, I cut it down. I thought that the squash would add a really nice flavor to the soup, whereas the spaghetti would just take on whatever flavors were already there. Also, ½ cup is a lot of oil for that much potato and onion.
Also, I got to break in the awesome new saucepan I got after someone stole my other one with a really tasty recipe! (Why would someone steal the damn pot? They're going to have to take it back to the kitchen to use it anyway.) Behold the shiny beauty (that I will never leave in the kitchen):
So, the first thing I to do was try to cut the leftover squash half I had into pieces small enough to drop into the pot. It took two people and three knives to reach this point:
Then I used a stewpot that's been sitting downstairs with no one's name taped to it to set all the chopped stuff to boil.  (Unlike certain stealing assholes who I haven't tracked down, I washed it, dried it, and left it neatly where I found it.) I might have boiled the squash separately, but that would have involved tracking down a third pot and then washing it afterward. So I just rinsed off the dirt, dropped it in with the rest of the chopped stuff and figured I could fish it out later and scrape out the insides. Also, when you're just dumping them in soup, frozen peas are as good as fresh. Save yourself the money and the bother of shelling.
Having set that aside to boil (seriously, carrots and celery take forever so I started them first), I put the potatoes and onion into my marvelous new saucepan!
These cooked until there was a pretty thick layer of browned potato starch at the bottom of the pot. Then the can of tomatoes got dumped in, and with the extra liquid soaking everything I scraped the bottom of the pot so it'd add a nice browned-potato flavor to the soup rather than burn onto the pot.
And so both pots sat on the stove to stew! This part of making soup is the hardest for me: I'm really hungry and have no chopping, stirring, or anything else to distract me.
Eventually, the squash was done enough to fish out and scrape. Not actually done, but impatience told me that a bunch of free floating spaghetti squash strings would cook faster anyway. 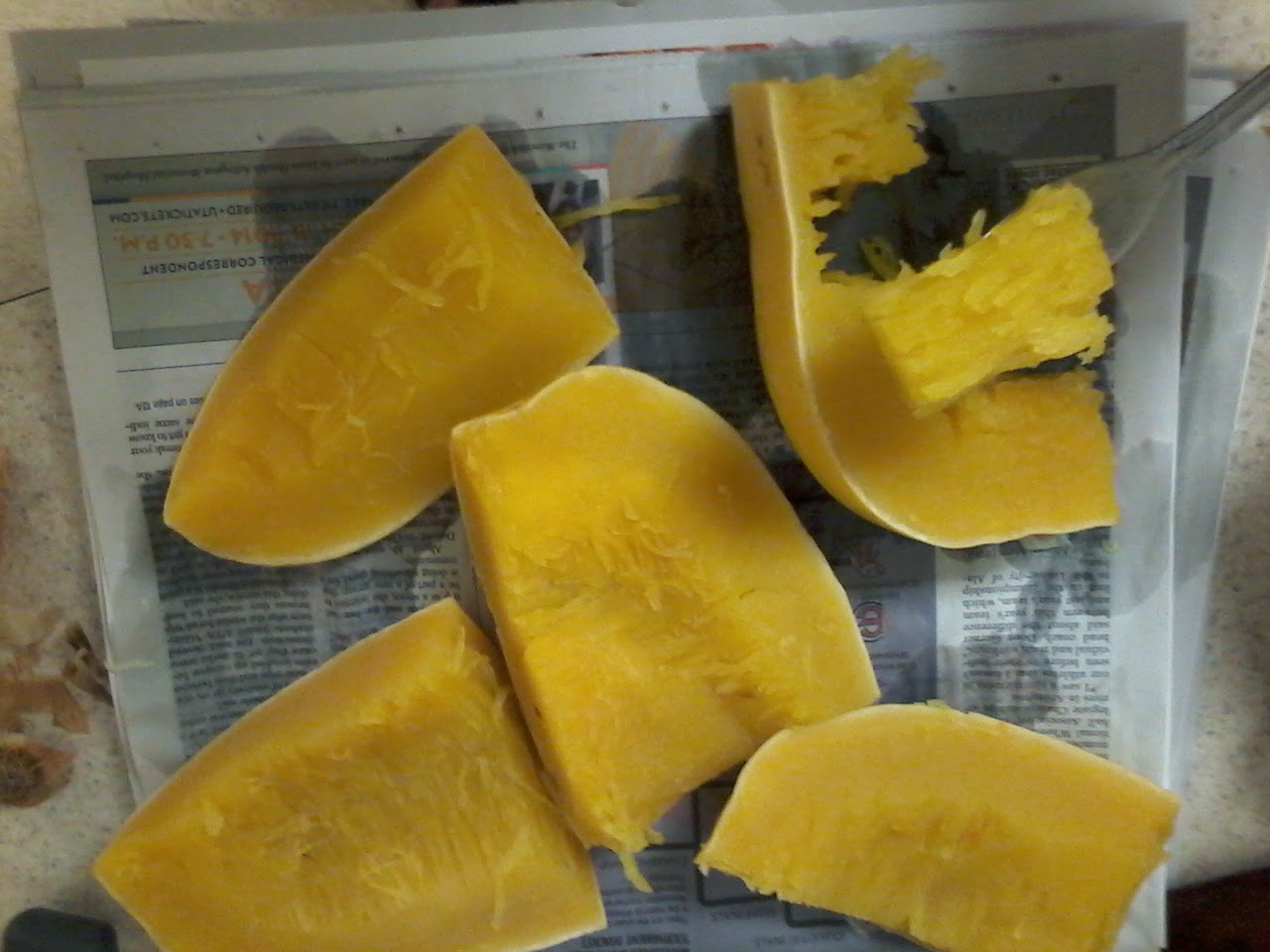 You may be wondering why I used newspaper for this when I surely had a tray or cutting board at hand. Well, first, I don't. Second, even if I did, I couldn't do this:

And finally, the whole thing goes into one pot! The tomato-potato stuff had really reduced and actually dried out a bit and the browned-onto-the-pot potato had dissolved in and added a really nice taste.

And now we're nearly finished--- except I forgot one last thing:
I fricken love garlic. And I added this at the very end so it wouldn't get mellowed out stewing. I wanted four pungent garlic cloves! (Why no, I don't have a date tonight.)

Here's a bowl of it without the cheese on top: 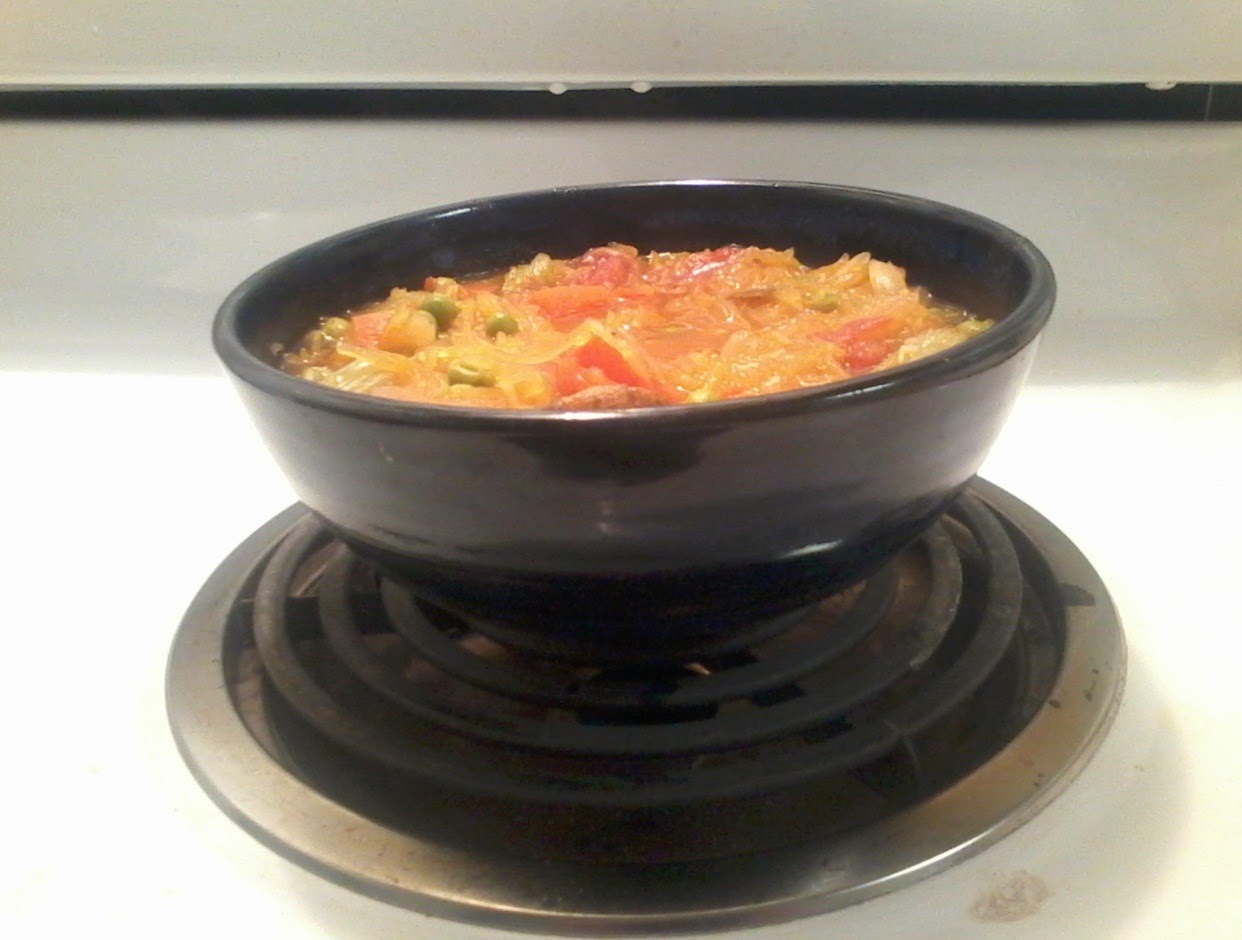 Finally, have you ever tried to find somewhere that sells Romano cheese? I see various mozzarella-Romano cheese blends everywhere, but no one sells straight Romano cheese in supermarkets. I don't have a cheesemonger nearby, and if I did I couldn't afford it. So trying to stay within the range of hard and pungent, Parmesan cheese it is!


I didn't really see the point of putting cheese on top of the soup, but went ahead because I have no idea how this is supposed to taste anyway. The pungent flavor went really nicely against the taste of the vegetables if you got some of both in each spoonful.

Also, this refrigerated well (what soup doesn't?), and reheated nicely.