Today we have another entry in the carrot cake series on A Book Of Cookrye! I found this one on Food Timeline, a site I find oddly addictive. I read this and wondered why they called it a cake when it's clearly a pie. Then I decided that if I ever served it, I'd make a Boston cream pie just so I can say "I've made cake and pie. No, that one's cake and that one's pie."
Anyway, my carrots are reaching the point of needing to be peeled before I use them, so which would cause a lot of people to just throw them out. I, however, am too daft for that.

See the article title? In today's "How to Fight the High Cost of Living" column, the Ogden Standard is going to show us how to have tasty desserts that cost less. Also, this is from 1913! If someone's great-great-grandmother clipped this, it might be a family recipe by now.

But first, I had to come up with the four cooked carrots. If you've ever tried to boil carrots, you know they take forever. Which is why I did this.
Since it was somewhere between 3 and 4AM (being part Irish, I became nocturnal partly as a defense against the sun), no one was there when I started singing Microwave Love as the carrots and the soggy paper towels sandwiching them spun around and around. (side note: Les Horribles Cernettes, in addition to being in the first photograph ever on any website in the world, are awesome. How could you not like a group of CERN employees singing science humor?)

I was worried about the small amount of sugar, but then I tried the cooked carrots and they were really sweet. And anyway, I'm economizing.

I thought it was supposed to be 3 spoons of almonds, but checked and saw it's meant to be 2. A little extra almond never hurt anyone. So into the mixing bowl (which is not at all the stewpot someone's left in the kitchen these past few weeks) they went. Then I added the tiny ration of sugar. Since I still have no measuring spoons, I poured in three spoon-sized splops and figured they'll do.


Then at some point I realized that at some point I'm going to wish I had a pie crust ready. I find regular pie crusts a pain in the ass to make think crusts from graham cracker crumbs are tastier.

My mom separates eggs by pouring them back and forth between the shell halves. I never could do that, so I go with the easy way.
So now we've got yolks and the melted butter in the carrot pulp, time to beat some egg whites into submission!
So after stirring a couple of spoonfuls of egg-white foam to soften the carrot pulp, I try the always-dicey operation of carefully folding them in without deflating them.

All right, so it's going to be a thin pie cake thing. You don't fight the high cost of living putting all of your butter and sugar into one pie. I checked the recipe and got to the last line: "Bake in a hot oven until ready." When the hell is that? How the hell am I supposed to know it's ready? Did the Ogden Standard consider putting in some little line telling me how I'd know?
I tried the stick-something-in-the-center test, and it came up clean before the thing was even warmed through. It seemed to be getting firmer on the edges, so I left it in the oven until it was set. Partly influenced by this pie being called a cake, I went with seeing when it springs back when lightly pressed.
So I took it outside to cool, nipping off and eating little bits of the crust as I went.  It cooled just slightly and was tantalizingly warm, so I was really anticipating this. 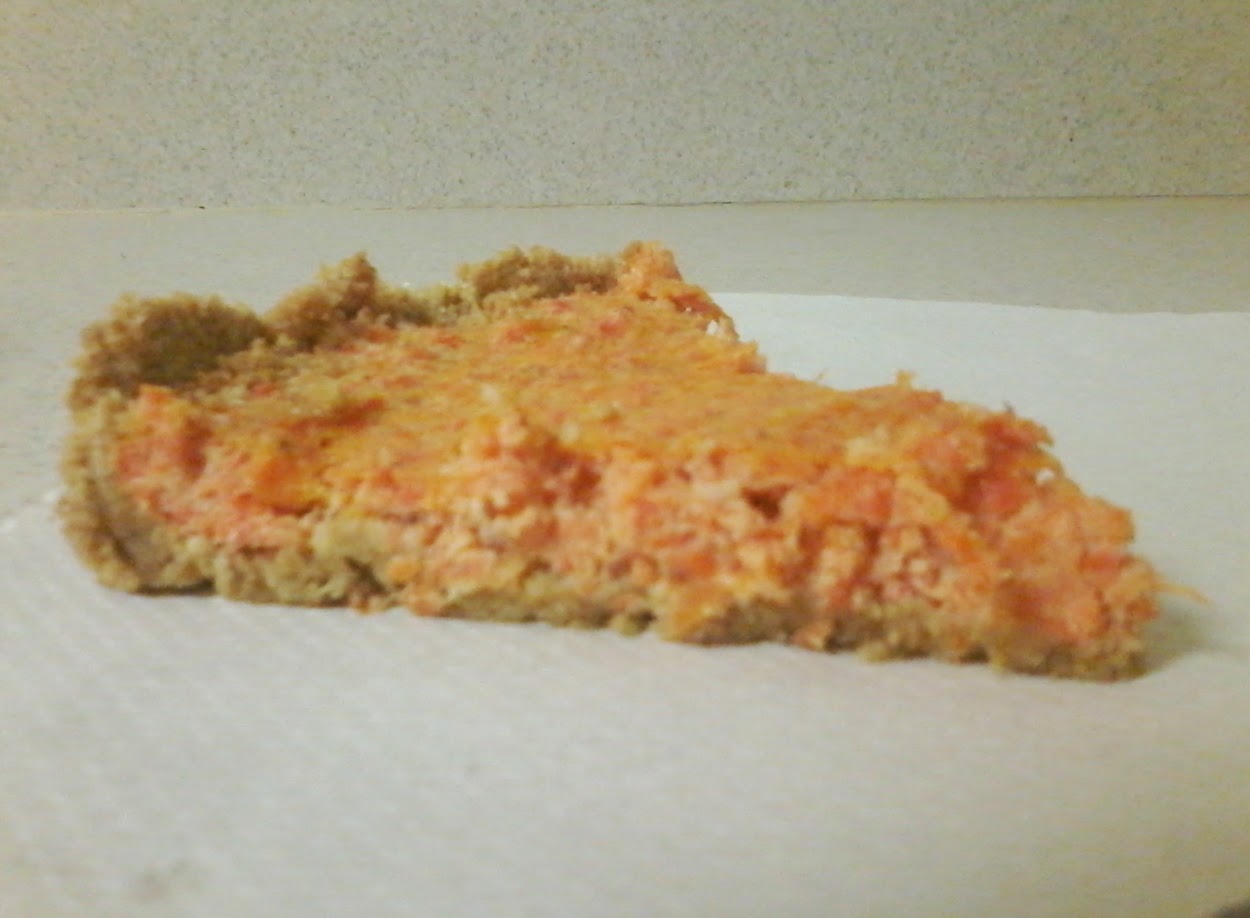 It tasted nice, buttery, kinda toasted... I liked it. Then I realized I was just tasting the graham cracker crust. I carefully bit off some filling, and tasted.... nothing. No carrot, no almond, no lemon, nothing. So I'd made a nice crispy graham cracker crust with pointless foam on top. When you're fighting the high cost of living, a crappy "dessert" that tastes like nothing is adding insult to drudgery, especially since they'd have had to boil the fricken carrots forever instead of microwaving them for 6 minutes (which is a long time to microwave anything) and then make the pie after first making dinner. And then wash all the dishes from both.

But something really amused me at 5AM after I was cleaning up from a crappy recipe- the bag I had the lemon in tore as I was putting the other half away and I thought it looked cute in the biggest piece remaining. If you were cleaning up a kitchen at 5 in the morning after not had any tasty dessert, you'd likely have been going "Awwwwww...." too. 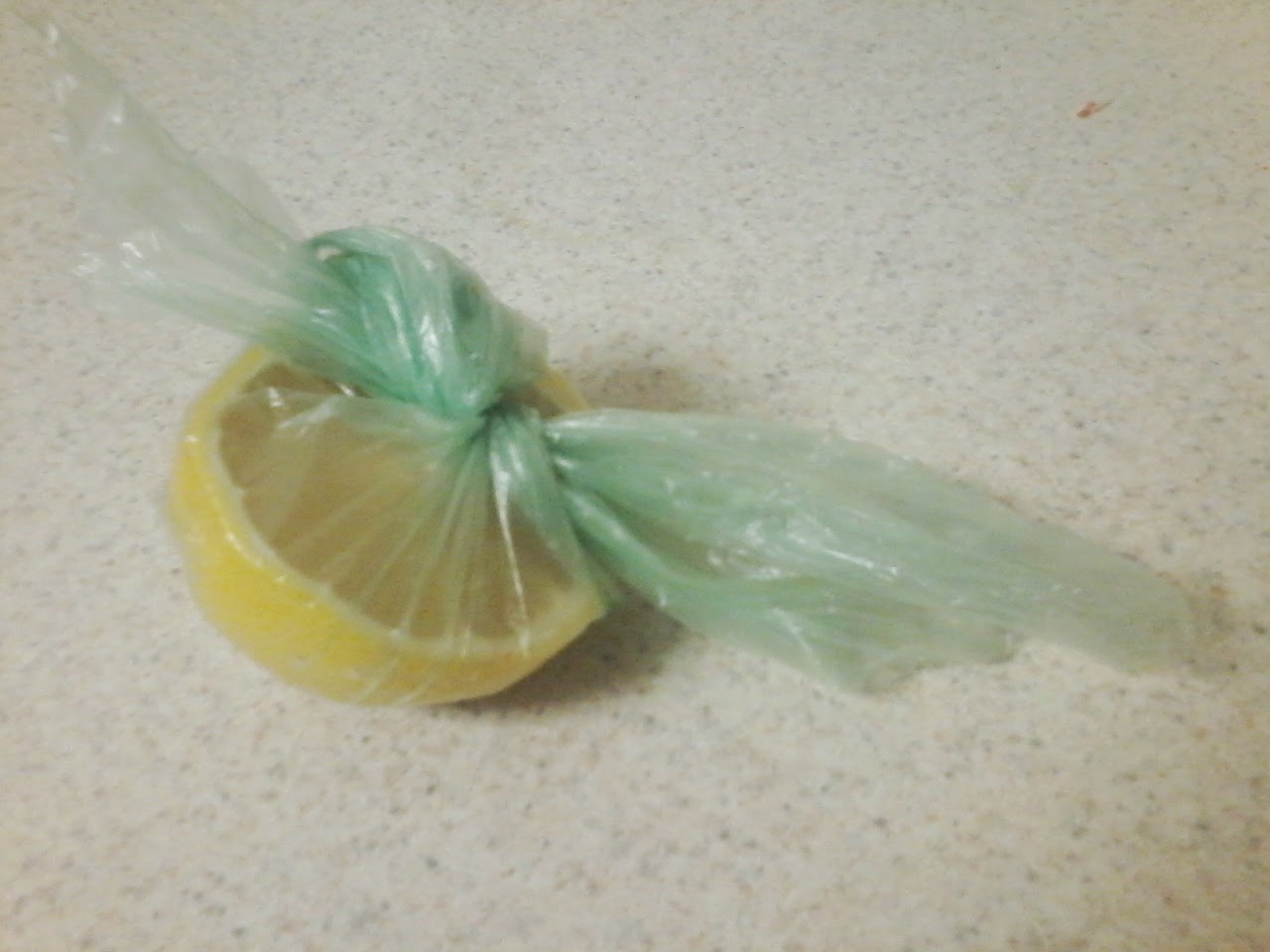