Chicken Baked with Mushrooms (or, I've been watching Fanny Cradock)

I've been watching videos of Fanny Cradock- one of the first television chefs who got more mileage out of their personality than their recipes. If you've never heard of her, the biographies I've found online describe an... interesting life. So I couldn't help wanting to adapt one of her simpler ideas:

I should say that I have no idea why I picked this recipe. I don't even like mushrooms. Every time I find them in food, they're these bitter and slimy things that I shove to the side of my plate. Whenever someone makes something with mushrooms and I get a plate, it's expected that someone else will be reaching over with a fork and taking away the slimy, oozy mushroom heap I've piled up. But for some reason I decided to deliberately purchase mushrooms and then actually use them. And somehow it turned out delicious.

Cooking meat is one of the few times I demonstrate any ability to plan ahead. I try to get everything ready before I unwrap the meat so I can touch as few things as possible with raw-meat hands. I mean, who wants a colony of salmonella on the salt carton? This is also one of the few things that make me go germophobic. Seriously, it's not a meatloaf in my kitchen until I've washed my hands nine times in the course of making it.

So before I unwrapped the chicken I poured out some oil to rub on top.

Then I poured out the salt and pepper that I wanted to put on the skin onto a paper towel. Since I started making this at 11:30PM (somehow I always do my cooking in the dead of night), I forgot to take a picture. But imagine a massive heap of salt and pepper on a paper towel, and that should be about right.

Then I salted and peppered the mushrooms. Here I want to make an aside and note that they had dirt on the when I unwrapped them. At first I was annoyed at having to rinse them, then I realize that holy crap, the quality of supermarket produce around here is such that I'm bothered about having to just rinse something! So then I didn't feel annoyed any more. Anyway, here they are before I tossed to distribute the salt and pepper (which conveniently stuck to the water left on the mushrooms from rinsing), to give an idea of how much I used.

Now, it was time to get out the bird! I set it in the sink and cut off the wrapper. It's was kind of tricky because I had to carefully avoid cutting the skin since I was about to stretch it an awful lot.

It was still partially frozen, and the ice held some of the giblets firmly inside. However, I had no patience to let it thaw of its own accord.
Next comes the big moment when this goes from being an ordinary baked chicken into a mushroomy one! As a bonus, since I lack a proper roasting pan, I get to use my awesome skillet!
First, to pinch the skin until I can lift it like this:


There was this sort of seam right down the middle where the skin connected- you can see it sinking between my index and middle finger. I thought about cutting it so the skin would be entirely loose, but decided to spare the bother and just shove half the mushrooms on either side. I thought about chopping them, or at least removing the stems and gills. Then I decided that was too much effort and that it'd probably be fine.
All that remained was to coat it with oil, and rub it with salt and pepper. In retrospect, this would have been easier to do before I stuffed the skin.

...Well. Um. That doesn't look unnerving at all. Nope, we see raw chickens with freakish lumpy outgrowths all the time, right?

And it's not at all worse when after 15 minutes or so, the stretched out skin goes transparent in places. 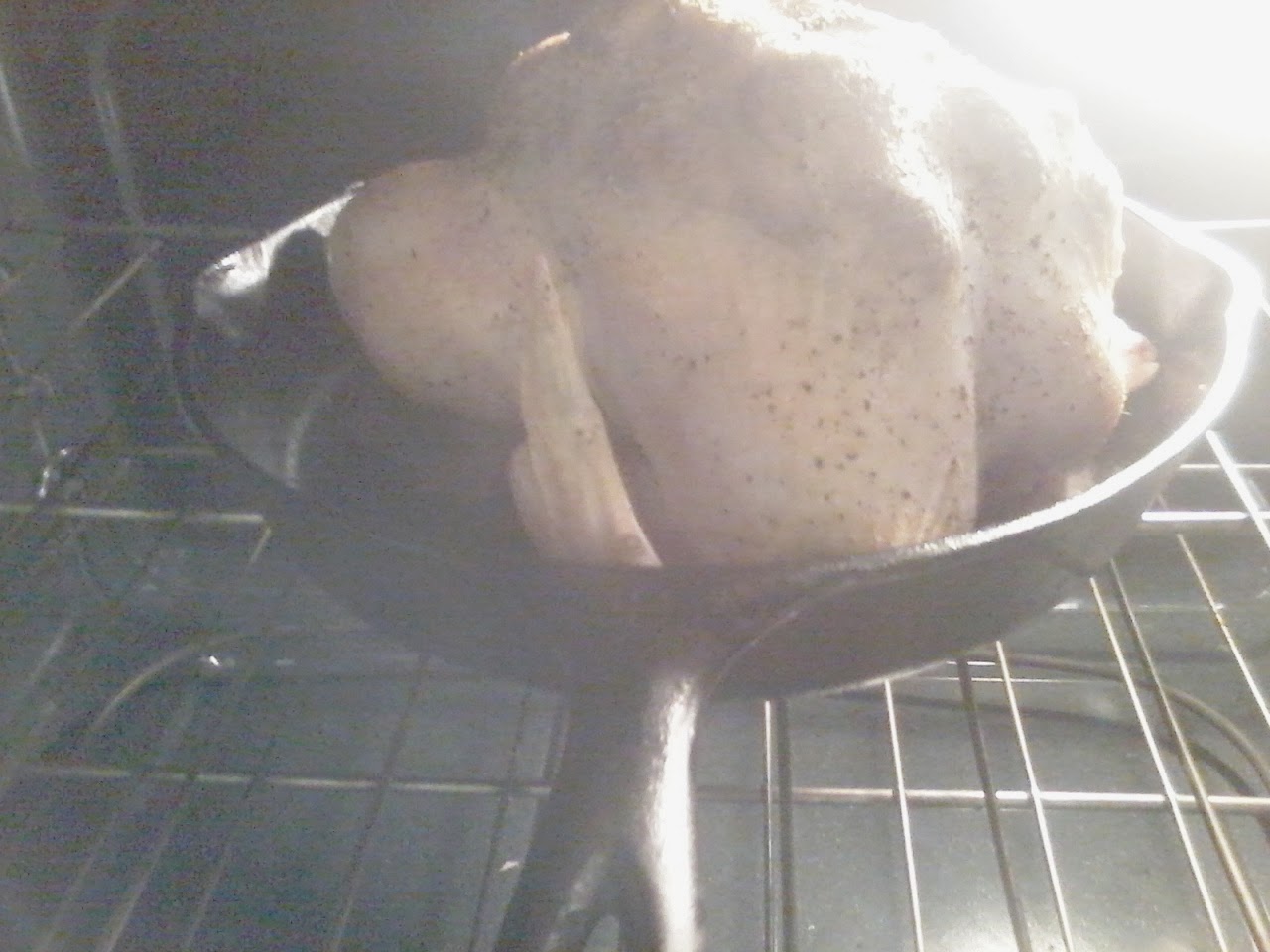 They did shrink down a bit by the time the chicken was done, getting it at least partway back to a decent shape. 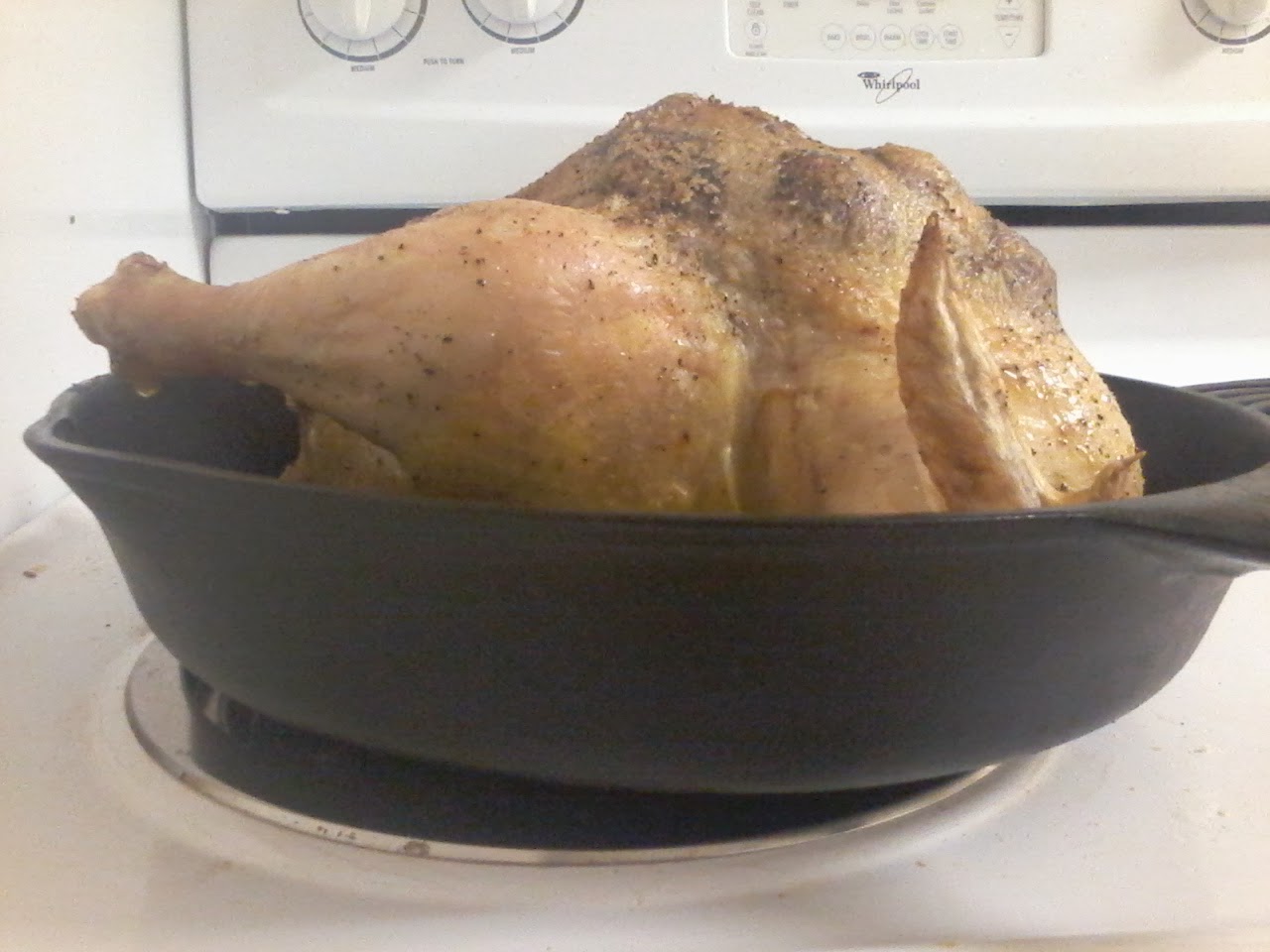 But the sight of the now-black mushrooms pressed in there made part of me fear that the chicken had somehow contracted phthiriasis and that as soon as I cut into the skin some unspeakable creatures would swarm out.


But I reminded myself that poultry rarely develops an advanced infestation of any form of lice or mites while baking and got ready to carve it. Then I realized I don't know how to carve a chicken. So here's Fanny Cradock herself showing us how it's done.

First, I just scraped all the skin and mushrooms to the side and found mushroom dents in the meat underneath.

I wasn't sure what to do with the mushrooms- do you put them on the plate or are you supposed to discard them once they've flavored the chicken as it cooked? I answered the question by trying one as I was carving.

THE MUSHROOMS WERE DELICIOUS. They were so addictive- I almost ate all of them before I had the legs and wings cut off. And this is coming from someone who usually finds them so slimy and bitter that I just don't eat them. Their own flavor went amazingly with that of the chicken and the ungodly amount of pepper and salt I'd dumped on them (never skimp on the pepper).

The chicken itself had a marvelous mushroomy flavor throughout. I've often found that the meat in the center of a baked chicken has absolutely none of the taste from the seasonings you put in, but this was not so.

When I make this again (and seriously, it's when and not if), I'm going to stuff it with more salted and peppered mushrooms rather than baking it empty. There weren't enough.


And as a nice bonus after tasting so good, this left my skillet really shiny.