When presented with alcohol, I'm more likely to say "Oh, I've got a recipe that uses that" than I am to say "Yeah, pour me some." The last time I had beer, I used it in beer bread and to marinate a steak. It's not that I don't drink, but I just don't have anyone to drink with in the area. Anyway, when someone was serving out sherry, I immediately thought of something I'd been meaning to try to make for a while.

The actual recipe name is Sherried Fudge Bars, but I think Spiked Brownies is more to the point. This comes from an awesome cookbook my recreational thrift-shopping grandmother gave me:

One of the best things in the middle of the night is brownies. Seriously, brownies are delicious in the middle of the day, but around 1AM they're magical and divoon. And since it's that time of night, and it's midterm season, even if these come out terrible they'll be delicious brownies.
This is one of those times when I am missing various ingredients and things, but decide that these are middle-of-the-night brownies (the best kind!) and that all the stores being closed will absolutely NOT get between me and booze brownies!

So I read here that grating chocolate makes melting it so much faster. So, for the sake of making this go faster and not at all because I wanted to get out the meat grinder again, I decided to grind the baking chocolate through the thing. Also, because I am curious (and because the thing is so much fun), I tried the coarse, medium, and fine attachments to see if they really make that much of a difference. And in the interest of science, here is the result:

And then I melted them, for some reason making that oh-ho-ho-ho laugh Edina has on Absolutely Fabulous as I pulled a mug of melted chocolate and butter out of the microwave.
So, as happens often when baking in the middle of the night: I realize midway that I'm missing stuff.

First I'm missing: This recipe calls for beating the crap of eggs, and I don't have a bowl I can put an electric mixer in. I for one am not going to try to find someone selling mixing bowls in the dead of night, and I'm not going to let a shopping trip delay delicious brownies anyway.

Second thing I'm missing: brown sugar. Fortunately, since molasses is one of my favorite things ever, I got around that.

Well, that's the eggs beaten into submission, the dry ingredients mixed together (Sifting is for suckers), and the cocoa-butter melted. Now to mix things!


This is one of my favorite parts of making brownies. When you put in the melted chocolate, it sinks to the bottom of the bowl except for a few drops: 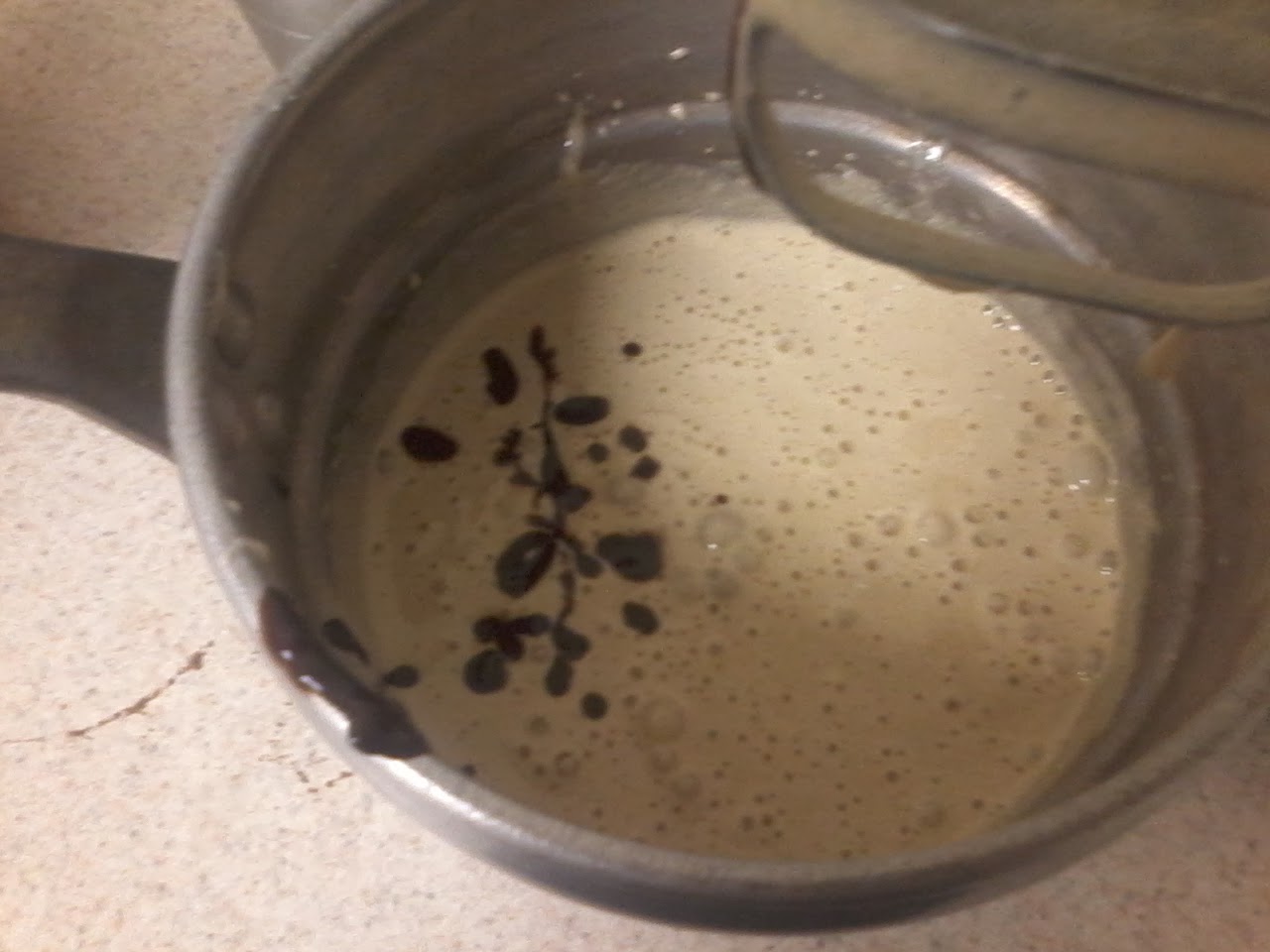 Then, you put the mixer back in on low speed, and it all swirls back up through it all!

So then I dumped in the flour, beat it in, and then got out the sherry bottle to pour some out and add.

I sniffed it to see what I was adding, and honestly it smelled like the cheap crappy wine you serve to guests you want to get rid of. It was like wine with extra pungency added. But by now it was 1:30AM, so I put it in the batter anyway.

Now at this point, I want to talk about my absolute favorite part of baking: The batter! I do not own a rubber spatula (aka 'child cheater'), and never learned to scrape a bowl out thoroughly.  I had this much left when I decided I'd poured in enough. 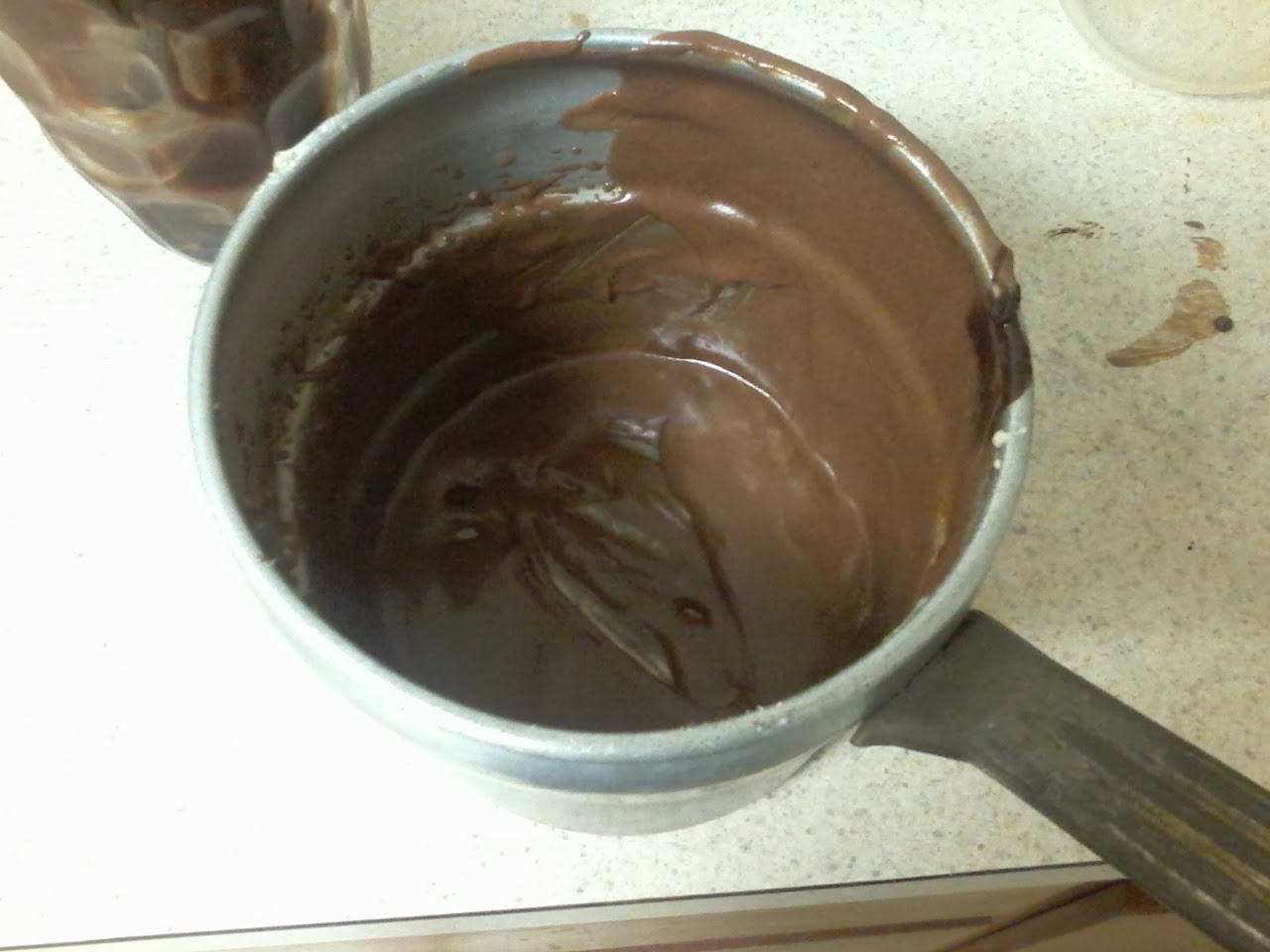 Then I finger-polished the inside.

So then the batter went onto my greased and floured 8" square pan, which looks an awful lot like a 9" round. Then I read the baking time at the end of the recipe. FORTY-FIVE MINUTES!?
Fortunately, the pan being thinner, they were done early. And I can use the AC as a ventilated cooling rack. Seriously, this is awesome. If I live somewhere that doesn't have such an air conditioner near the kitchen (or at least floor vents), I'm rigging up a drying rack with a box fan pointed up at it.


So now it was time to taste the finished brownies!
Contrary to the official recipe name, they were not fudgy but really fluffy- about halfway between brownies and an unusually tender cake. The pungency that made the sherry taste so cheap had dissipated. It came off like I'd added some unusually nice wine which added a really nice flavor that went very well with the chocolate. Absolutely delicious! Time to serve them to everyone else who's still up!
In the next room, a loud game of Cards Against Humanity was going so I brought these out. I'm going to let this shot of the pan after 2 hours show how good these were:
There you go. They were that good. You should totally try these.
Posted by S. S. at 2:50 AM