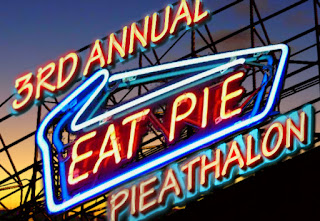 I was really excited about this. After all, last year we at A Book of Cookrye got rhubarb and strawberries. Granted, the year before we got an utter travesty of food, but that was a thrilling, frightening adventure. This year's recipe is perfectly timed, for we at A Book of Cookrye have been eating way too much spaghetti and brownies! And what should we receive this year to make but a lovely, slimming dessert from our friendly friends at Weight Watchers?
This recipe comes to us courtesy of Surly over at Vintage Recipe Cards, who sends it with this note:

I'm a horrible person. We know that.  Which is why I will not apologize for this submission. 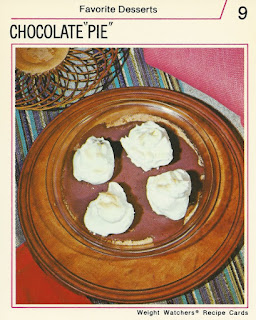 This recipe looks relatively innocent. What could she have to not apologize for when sending it? It kinda looks like frozen pudding with some blobs of Cool Whip dumped on top. How bad could it be?

Thank you, Surly of Vintage Recipe Cards. I hope your Transparent Pie that you get to make is every bit as divoon as I know this is going to be! Meanwhile, I sent an awesome vintage fish pie recipe from Pan Am Airlines which Bittersweet Susie gets to make. And in return, I get Weight Watchers.
For the record, I did in fact make this with two friends. I did not go into this alone. However, no one else was willing to taste this thing. Let's have a look at the beginnings of this recipe: the crust. Take a good look at these perfectly innocent pieces of toast because that's the last time this recipe's going to look any good. 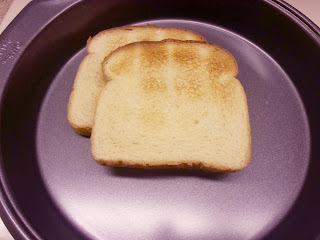 The recipe tells us we are to make the toast into crumbs. As anyone who's eaten toast knows, the inside of it remains soft and therefore unsuited to crumbification. This is because no one likes starting their day with utterly desiccated bread rocks. However, since we had perfect toast, this was the best we could do when attempting to pulverize it. 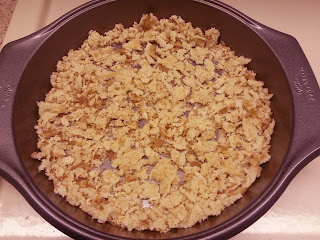 Behold our utter failure of attempted breadcrumbs. It's at this point that someone pointed out that we ought to veer off-recipe and add a third bread slice since it might cover the taste of the pie. 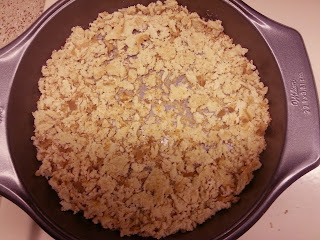 Now, at this point we're supposed to bring out a lot of fake sugar. We at A Book of Cookrye, being cheap, would like to thank our friendly local gas station for their generous donation toward making this alleged pie.

All right, while the bread shards are in the oven, let's get down to the gelatinized business. 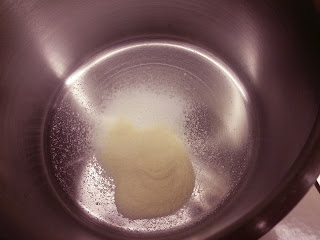 You know, I have to register surprise at who brought this recipe into perspective. When I first got my assignment, I looked at it and thought "Oh dear God no...". Then Our Mom of Cookrye saw it and thought I had been dealt a great injustice. It took one of my friends to read the recipe and point out that all we're doing is making sugar free Jello. Granted, we're doing it from scratch instead of just buying a packet and using milk instead of water, but maybe they didn't have sugar free Jello in the 70's. Besides, if you don't think about what went into it, the pot looks like a perfectly normal custard in the making. 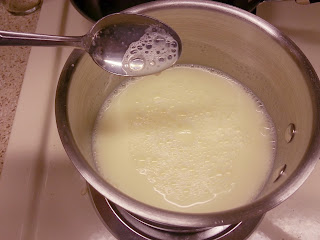 Meanwhile, the bread in its requisite baking time had hardened to the point where an aspiring cook could actually turn it into bread crumbs. However, the recipe doesn't say to further pulverize it, so in the spirit of "whatever, this will probably be terrible anyway," we left them gloriously intact. If you squint your eyes and use the extra-strong beer goggles, it kind of looks like terrazzo. That's right, the best thing we can say about this pie so far is it looks fit for stepping on. 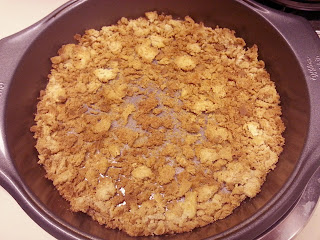 Meanwhile, the food coloring was bleeding all over the pie filling. Now, you may notice that this pie calls for chocolate extract rather than cocoa powder or melted chocolate. Does anyone ever use chocolate extract? The last time I ever saw a bottle of chocolate extract, it was lurking in the kitchen cabinets under a thick dust layer- and that was when I was in high school. Once my devious friends and I decided underage drinking was awesome because all those DARE people in high school told us not to, and furthermore that most extract is somewhere between 30-50% alcohol and they don't card you at the register, that bottle and a few of the larger bottles of bulk vanilla were expended in the name of teenage rebellion. (For the record, adding it to Diet Coke is no worse than your overpriced well whiskey. Also, we never drove.)
Anyway, we couldn't find the stuff anywhere. We looked online and found the only store selling it nearby was Sur La Table, which we remember as being one of the places to outfit your kitchen you'll never use back in the 90's. They charged over $8 a bottle. Driving to different groceries was such a drawn-out and futile endeavor that we took to calling all the stores within a reasonable drive- nothing. We wondered if we could somehow combine vodka and cocoa powder to fake it, so we looked up how to make our own chocolate extract. What should come up but someone saying how to make the very thing! However, I gave up as soon as I saw one of the requisite ingredients was "crushed raw cacao nibs." We ended up going to a hoity-toity grocery store and spending $5 on one dinky little bottle in the name of a crappy pie.

At this point, we reach what I thought was the funniest part of this whole recipe. We're supposed to dump in red and green coloring to turn this pie a "rich chocolate brown." Don't ask me why we ended up with this charming shade of blue-ish purple that is perfect for bathroom tile. 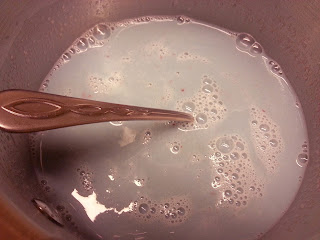 Further attempts to turn this brown ended up with... well, an even better shade of bathroom tile. Seriously, this is a color I would want to gaze upon while experiencing sweet relief and feeling the gentle breeze from a window that needed opening. 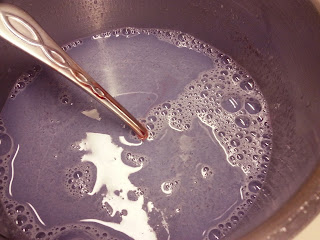 All right, let's dump this gelatinized mess into the pan of violated bread and see how it sets! 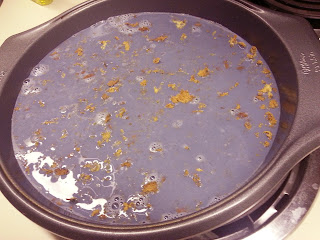 This pan of... stuff sat in the freezer for 45 minutes, followed by two hours in the refrigerator when it started icing over before it actually congealed. After two hours didn't set it (it didn't even get kind of syrupy like gelatin is supposed to on its way to turning gelatinous), we said "fuck it" and decided to plate it. I gotta say, the sarcasm quotes in the recipe name turned really useful when we served up a "plated" "slice" of chocolate "pie."

You may be expecting at this point some horrified notes about how utterly dreadful this tasted, but actually... it wasn't too terribly bad. It wasn't at all good, but it wasn't utterly disgusting. More than anything, it tasted like toast and artificial sweetener. Yep, the toasted bread flavor seeped into the "pie" in its extended refrigeration time and overpowered the various extracts. Given a lot of people put a packet of fake sugar on their toast, it's not too terribly odd a flavor combination, though having it in liquid form was very strange. Don't get me wrong, the most anyone ate of this was a tiny spoonful, but it was not the horror I expected it to be either.
I think that was the point of most diet dessert recipes. They were a pain in the ass to make, came out a funny color, tasted bland with unnerving chemical undertones, and made you the dieter decide you didn't really need dessert anyway.
Thank you for joining us for another edition of the Pieathlon! Be sure to see what everyone else made!