Hump-Day Quickie: Chopped Beef Sandwiches, or We're not throwing the meat away

Did you overcook that meat you brought home? Is it a miserable, stringy mess which you can barely eat? Did you have to floss right after you ate even though you usually only floss when you have an unusually attractive date? Do you hate wasting food so much you still can't let yourself throw the meat out? We at A Book of Cookrye are here to help!


We are going to take those miserable shreds of overtanned leather masquerading as steak and transform them into something so delicious people order it on purpose. Don't worry that it looks like dog food, it will get better. 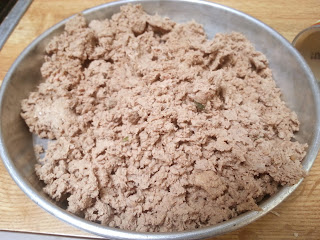 And so, not 10 seconds after we finished grinding, this all starts to make sense. You know how a lot of people use mayonnaise to glue together their tuna or their chicken salad? We're going to do the same thing but instead use BARBECUE SAUCE.
You may be worried that whatever you seasoned the meat with when you set out to cook it will taste odd or unfortunate when you do this. You are wrong. Even if you used (for example) ungodly amounts of curry powder, these will still be good. 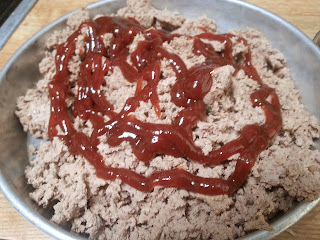 And so, those stringy, nearly-inedible beef slabs have turned into a staple of barbecue shacks everywhere. Seriously, people pay money for this. In high school, the local creepy Jesus people tried to lure people to their for-profit megachurch by filling coolers with these and bringing them in at lunch. We and our friends used to regularly visit ourselves upon the place by where our parents then lived because they had a 5-for-$5 deal on these sandwiches (you could also get just the meat at $6 per pint). Don't throw out your miserable husks of burnt meat when you can make these.

We at A Book of Cookrye jest not, this will turn even the stringiest, toughest meat into something delicious. You might even deliberately buy the cheap cuts of meat for the express purpose of making them. Though when you put away the leftovers, you will quickly realize how most barbecue places can sell chopped beef by the pint. 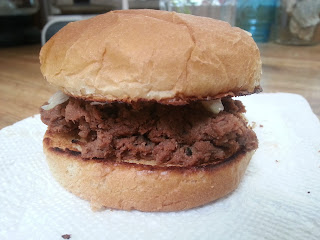