Seawater Spaghetti: or, A Book of Cookrye Dream Realized

We at A Book of Cookrye, despite how much we should be worried about blood pressure (you know, living on a steady diet of American foods and all), love salt a lot. We long have had a dream which all of our friends know about: to go to the sea, take our pot into the water, and boil spaghetti in it. Many people have pointed out that it would probably taste foul. To this we have always responded that we want to do it anyway.
Earlier, it looked like we might realize this dream when a family seaside vacation was announced (What, me? Afford my own accommodations?). However, we instead took a long break from sporadic employment to actually land some work! (Hey, I can't help it if a job comes up when least expected.)
However, what should Our Father of Cookrye bring back but this? 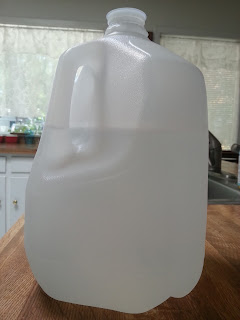 Yes indeed, while out on a boat, he filled the above-photographed with seawater! We thought it was bottled water until opening it. Did you know how pungent seawater smells when you're not at the shore and therefore used to it?

And so, we at A Book of Cookrye have finally eaten spaghetti cooked in seawater!

And it is salty. So, so salty. Since I love salt (I may or may not have furtively licked those new age salt lamps when I was younger), it was perfect. Surprisingly, it didn't have any fishy taste (even though the salt-fish smell took over the kitchen while it boiled), so it was surprisingly normal spaghetti (or, salt with some spaghetti that fell in the pot by accident). This is astonishingly delicious (unless you're low- or moderate-sodium). If you happen to live by the sea and haven't done this, why haven't you?
Posted by S. S. at 9:41 AM

Email ThisBlogThis!Share to TwitterShare to FacebookShare to Pinterest
Labels: easy