Today, we at A Book of Cookrye are venturing into territory we so rarely bother with: little appetizer things!


As aforementioned, we brought these to Thanksgiving. Being the extremely organized people who plan ahead when provoked, we were getting ingredients less than two days before the big day. It was a strange experience seeing so many people crowded in the baking aisle. Many of them were staring at the flour and sugar sacks like they'd never seen such arcane things in a grocery store. However,  one section of the supermarket that even in the pre-Thanksgiving rush remained as ignored as ever: the vegetables! 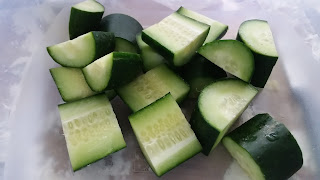 Remember the cucumber baskets from when we fed people the cuisine of Depression-era Britain? They had been surprisingly well-liked, so we thought to ourselves: What if we skipped the damn basket handles? As aforementioned, making them into little baskets had resulted in an awful lot of wasted cucumber. Furthermore, cutting vegetables into cutesy baskets gives them a certain air of "I HOPE YOU APPRECIATE ALL THE TIME I SPENT CUTTING ALL OF THESE INTO CUTE SHAPES FOR YOU" which we would rather the food not possess. And so, instead of making theoretically adorable cut them in half and gouged out the insides. Here we must note that while we were at first trying to carefully cut them out with a paring knife, it turns out one of these demitasse spoons Our Mom of Cookrye got works a lot better. 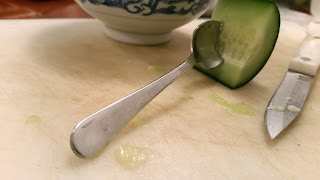 It was so much easier to just have at them with a spoon than it was to use a knife at all- and it worked better, too.

And so, we at A Book of Cookrye were ready to bring these lovely, healthy vegetables to Thanksgiving! However, Our Familye of Cookrye, though most of us are on diets the rest of the year, don't bother with this low-calorie business on Thanksgiving day. Look at the way we do the corn. And so, we are going to replace most of the cucumbers with.... this! 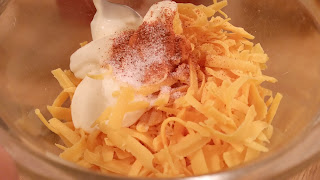 In the name of looking out for everyone's health,  we are using light mayonnaise. Having spent about two minutes stirring the cheese with just enough mayo to glue it together, see how simple these things are when you don't care about basket handles? 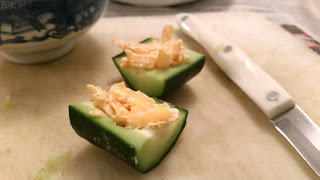 I'm not going to lie, it was still tedious to hollow out all those cucumber pieces. If you're doing more than two cucumbers, you might want to sit down at a table when you hollow them out instead of standing at a counter. But at least it was easy and there was far less waste of cucumber. Also, it was something to do while waiting out the long baking times on other things- and while very deliberately ignoring the utter mess in the kitchen. 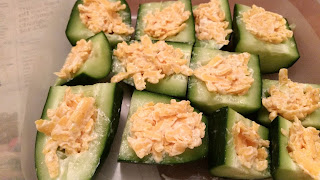 As for how people liked them: They were indeed very popular! I was honestly kind of surprised, since most of the "take your food stuff and glue it together with mayo" type things tend to be these sticky things that taste like mayonnaise. Maybe the trick here is that you don't just put huge amounts of mayo in there, but just enough to make the cheese hold together.
In the name of not subjecting everyone to dissertations about the food I brought, I didn't bother mentioning that they were tasting the British Depression.
However, while these can be made the night before, it turns out that cucumbers exude a lot of juice when they get warm. Since I just them in a container with only waxed paper between the layers, the ones lower down in the tub got soggy. So, if you are going to stack them in a container (instead of, say, laying them out flat on a platter), you want to be sure that each layer is sitting in a cozy nest of paper towels to soak up whatever juices the cucumbers exude. Also, keep them cold.

This wateriness kind of surprised me since the cucumber baskets from when we made an entire picnic didn't have this problem. Someone suggested the salt in the filling drew out the cucumber juice, but the picnic ones were also salted and didn't leak like these did. But, when thinking about it, the ones made for the picnic were barely out of the refrigerator for 30 minutes before serving, while these sat out on the table all day.
In addition to packing them with lots of paper towels, you might consider putting whatever container you packed them in in a larger container full of ice. Or, you might salt the cucumbers a few hours beforehand and let them do all their dripping before you put these together.
As a postscript, when faced with the last bits of cheese and also a little bowl of scooped-out cucumber insides, we avoided waste by making a pretty good ham sandwich. 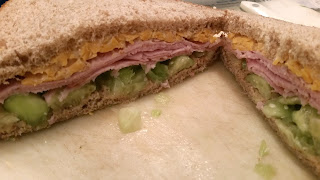