Pumpkin Spice Latte Brownies: or, The birth of a recipe

It's after Halloween, and Christmas has actually gotten a delayed start this year. The traditional American Christmas shopping season starts in August and has since before both the world wars. But in 2016, the fake pine, fake snow, and aggressive cinnamon fumes didn't appear in stores near me until November. It appears the absurdity of this year's election upstaged Christmas (which is astonishing given how many companies depend on holly jolly spending). Truly, every cloud has a silver lining- or at least a smoky gray one. Christmas is just a little more than two months away, and no one has managed to get enough airtime on any major network to shout about The War On ChristmasTM this year. Only one angry pamphlet about how some organization needs a six-figure donation to "Keep Christ In Christmas" has arrived in the mail. All of America's outrage seems aimed at the two blondes still fighting over who gets to spend the next four years at a lectern saying "My Fellow Americans," and no one has any left to dump on retail workers who utter "Happy Holidays" instead of "Merry Christmas."
We at A Book of Cookrye are celebrating this unexpected extension of autumn with what marketers have made into the defining fall flavor: pumpkin spice! 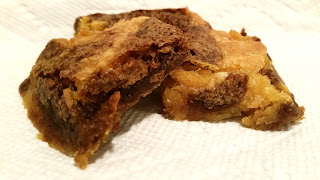 This actually took a lot of effort as we couldn't find any pumpkin spice brownie recipes online. There are a lot of recipes for chocolate brownies that contain canned pumpkin, and a lot of "pumpkin spice swirl" brownie recipes in which you basically make pumpkin pie filling and swirl it into chocolate brownie batter. Yet it seems no one has put in a recipe for pumpkin-spice flavored brownies. This surprised me almost as much as when I found out two of the biggest Internet food crazes have not collided to give us pumpkin-spice bacon (seriously, no one makes or sells it). And so, we decided to dig out a recipe for blondies and see if we couldn't twist it into pumpkin spice brownies. We were going to make pumpkin spice brownies or go through many cans of pumpkin while failing at it.
Our first attempt was based on some rumor making its way through Facebook right now. Apparently, if you dump a can of pumpkin and a box of brownie mix into a bowl, you end up with pumpkin brownies. Further research found this website of health nuts claiming you can can substitute canned pumpkin for the eggs and whatever fat went into a dessert recipe. Attempting that went exactly as expected.

They don't look bad, but they were really gummy and rubbery. They actually tasted all right, but brownies should not bounce. However, we will note that they refused to go stale, not even after being left out on the counter for three days. Instead, they turned almost bread-like. So if for some reason you want to make dessert three days ahead and just leave it out, do try this substitution. 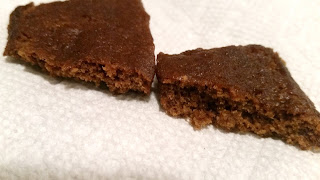 All right, this brings us to trial #2. With one exception, every good brownie recipe we've ever made contains a lot of butter. So, we reasoned, why not put the butter back in and only use pumpkin in place of the eggs? I mean, clearly removing the eggs didn't turn these brownies into inedible ruins- they were nearly something I'd actually admit to having made. Also, we decided to change out the brown sugar for white.

In the name of experimentation, we carefully considered butter vs. margarine vs. shortening instead of just picking one at random. Our first choice was butter because that is the default in all that we bake. However, the original recipe we are dickering with calls for shortening which does tend to make for more soft and gooey brownies. But shortening is just... well, it tastes like nothing but solid grease when you melt it. And I always feel kind of guilty whenever I put a huge glob of it in anything. The next choice was butter. We were about to melt the butter to begin the recipe when we remembered what happened when we accidentally ran out of butter, made a batch of brownies with margarine, and inadvertently ended up experimenting and finding out the difference between the two. 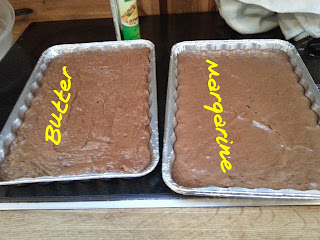 Therefore, margarine looked like the best choice.
This being pumpkin spice brownies, we then needed to add the spices. This is not the time to be shy with shakers; no one has ever said how much they like pumpkin-light-amount-of-seasonings. 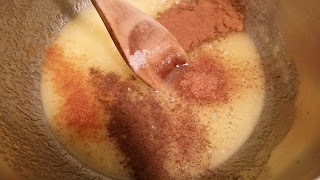 And now, we're getting in touch with white girls across America. Bring forth the pumpkin! 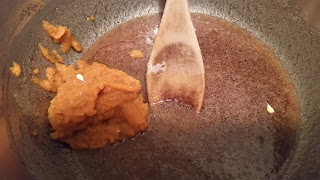 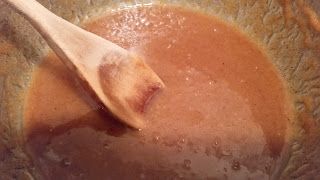 Is it really pumpkin spice if it's not that trademarked shade of orange? All we have is a bowl of... brown. Maybe the flour would lighten it into a more correct color. 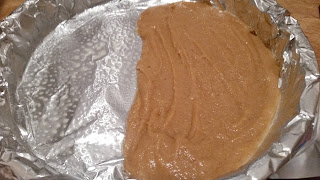 Dividing up the batter was easier than we thought it would be. The batter was thick enough we didn't even need to get out a second bowl (which we would then have to wash) to split it in half. And so, with a couple spoonfuls of pulverized coffee granules, we prepared to put the latte in pumpkin spice latte. 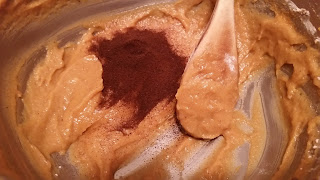 I can't lie, this tasted insanely good. And look how tantalizingly oozy and thick the batter is! However, adding the coffee powder ruined the correct pumpkin spice shade of orange. Worse, it didn't at least turn it a pretty shade of brown. 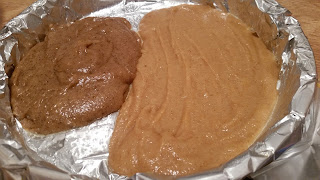 Seeing the stripe running down the center of the pan made us think- do we really have to do one or the other? Since we didn't have to do any extra work or get out any more dishes to make both pumpkin spice and pumpkin spice latte, it'd be the easiest thing in the world to just swirl the two together. 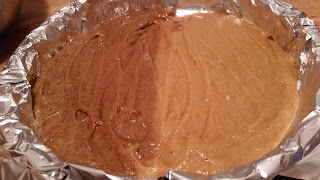 Well, we got the brownies into the oven, and they looked promising indeed. Both batters had tasted insanely good, and both of them looked like a batter should when we got it into the oven. Then, what should we see patiently waiting to go into the mixing bowl but this?

Well, we said to ourselves, it was too late to add eggs now. The batter was already baking. Furthermore, it had at least looked like brownie batter and not somehow wrong. Lastly, even if this did fail, we at least had cut the recipe down and therefore would not end up wasting a lot of ingredients. 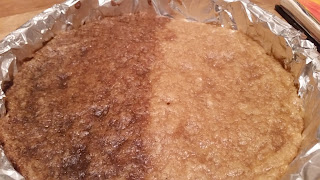 We tentatively removed them from the oven and waited for them to cool. They looked all right, if slightly greasy. But the heck would we find when cutting them? 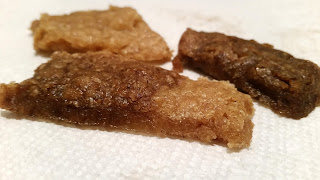 Brownies! Delicious, gooey, crackly-topped brownies! We were ecstatic as we ate one as soon as it had cooled enough not to cause burns. Sure, they were almost a soft paste than actual baked goods, but they would surely firm up as they cooled.
...or so we thought. As they cooled off, they proved not to be baked goods so much as a semi-set paste rather like most of our carrot cake failures and the still-regretted Diet Coke cake. We could have mashed the contents of the pan into a paste ball like this:

The problem, we concluded, must be an excess of butter. It's not that we object to buttery desserts, but these were really greasy. They had failed in exactly the same way as many abysmal carrot cakes, and all of those had so much oil in them that they were more fat-flour paste than cakes. And so, we reduced the margarine.
While we were at attempting to fix the recipe, we increased all the ingredients because the last batch of brownies had been pathetically thin- and that was just one dinky round pan, so we couldn't even get out a smaller one. Doubling the recipe would have been too much for one pan, so we one-and-a-half'ed it instead. Also, because the idea had seemed so tantalizing, we decided to make them swirly! As aforementioned, the batter was very easy to divide in half. We didn't have to get out a second bowl which would need washing. 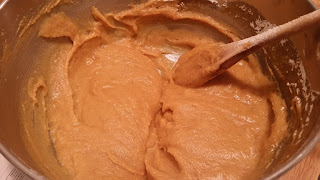 And so, having brought out the instant coffee, we produced swirly brownies! 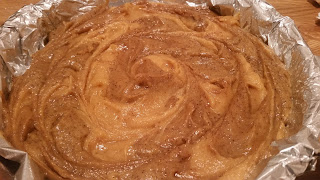 That's a real letdown of a swirly pattern. You can barely tell it's there. It was even less visible when they were done. Seriously, you have to closely examine it to see that these are in fact supposed to be swirly brownies. 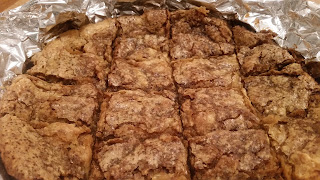 Well, they may not look pretty and swirly, but that wouldn't matter if they actually tasted good. They certainly looked delicious. 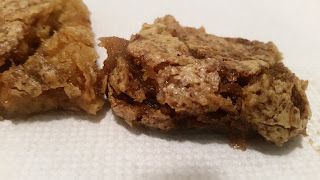 However, they were just as paste-like as the batch before. They weren't greasy like the previous attempt, but they were pumpkin-spice modeling clay nonetheless. And I know it wasn't from underbaking as they were in the oven until the edges burned. That said, they tasted amazing, so we deemed this endeavor worth pursuing into...
...Attempt four! If they were too paste-like and the problem was no longer excess grease, perhaps more flour is needed? Also, while we were at it, we really didn't like how invisible the marbling had been. I mean, what's the point of spending all that time (like, an entire two minutes) doing swirly patterns if baking renders them invisible? And so, we stole a page from RetroRuth of Mid-Century Menu, who made a pumpkin pie with mace instead of cinnamon which was apparently extremely orange instead of an orange-ish brown. Mace is expensive, but we already had a shaker of it which has followed us ever since we made snow muffins. If it has gathered dust and roach droppings this long, no one would miss it if we used the entire shaker in successive batches of pumpkin-spice experimentation. Instead of adding all the spices at once, we would add only mace to the batter. Then, once half of it was spooned into the pan, we would add all the other, browner spices with the coffee. 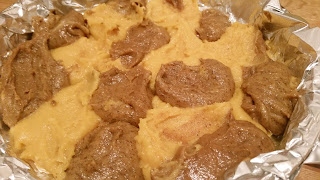 We should have known this wouldn't be the batch that sent us running into the street shouting Eureka when the batter was thick enough that swirling it made holes. 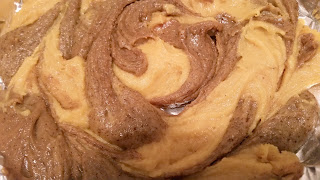 However, our spice-splitting efforts paid off in the form of visible marbliness! Granted, it's the same color as the sides of the '70s TV lurking in the back so many people's old photos, but at least you can see it. 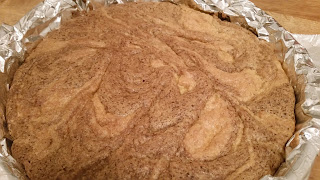 However, while we had fixed the pastiness in this batch, the greasiness in the batch before, and the gumminess in the batch before that, these were bland. You couldn't taste the pumpkin or the coffee. We had taken a promising recipe and turned it into a pain-in-the-ass spice cake.
By now, this was a challenge, which brings us to... attempt #5!
If the most recent batch had too much flour in it, and the batch before too little, we changed the amount of flour to be halfway between the two. Also, we added a lot more coffee granules so the dark stripes would be really dark- besides, you could barely taste the coffee in the previous batch. 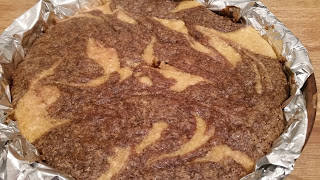 We hadn't tasted them yet, but at least they looked pretty.

And.. heck yes! We have success! They taste like lovely swirls of coffee and pumpkin. They're chewy, but not like paste. Sometimes experimentation pays off. Happy Fall, everyone! You can contact all of us at A Book of Cookrye using the address below: 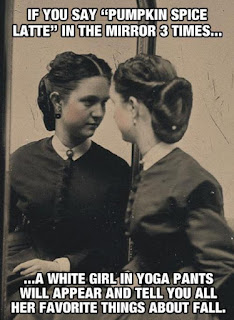