Brussels Sprouts with Dates: or, Peeping into the Lifestyle I Can't Afford

As aforementioned, we at A Book of Cookrye recently had the privilege of going somewhere that requires a passport! Since our flight home was delayed, we had plenty of time to get acquainted with the various magazines left behind by previous passengers. Among other things, we found... 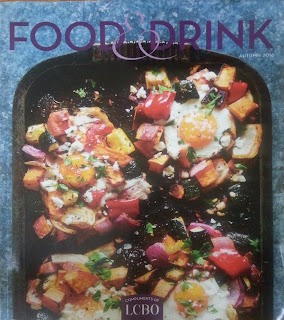 Yep, the Ontario liquor board makes an entire magazine of food-porn and expensive recipes (with interviews of local distillery owners and other such things thrown in). Given that the magazine is from a liquor board, I'm very surprised that it's not all spiked recipes. In fact, they spend more pages on what produce is in season than on what you should drink with it. I found looking through this magazine fascinating. As someone whose cookbooks come from thrift-stores, I've long fallen out of touch with the latest trends in food.
It seems the recession has pushed food back toward simple things. It makes sense if you look at notice how the most up-to-date restaurants and bars have replaced fancy plasterwork and chandeliers with exposed structural supports and bare light bulbs.

The recession may (allegedly) be over, but a lingering aversion to openly expensive things remains. All that designer stuff today may cost as much as ever, but instead of looking openly expensive, it is made to look artfully cheap. And so, instead of serving something with an extravagantly long French name, the up-to-date cook of today will serve something ostensibly cheap and homey like macaroni and cheese.... but subject everyone to a long dissertation on how the pasta was hand-shaped by vestal virgins and the lengthy history of each of the seven cheeses that went in it. This apparently distinguishes both one's refined taste in ingredients and how much one spent when purchasing them.
Anyway, we couldn't help wonder if we could get a brief taste of this lifestyle we can't afford, which leads us to...

We at A Book of Cookrye would like to defend the much maligned Brussels sprout. It turns out that Brussels sprouts aren't terrible so much as they are terrible when boiled. Sure, they smell bad when cooked, but they're still really good once they're done (unless you boil them). It turns out an awful lot of perfectly lovely vegetables, through no fault of their own, turn into bitter slime when boiled. It makes one wonder why so many people decided boiling was the best way to cook them. It turns out if you just salt and pepper them and then put them in the oven (as opposed to a pot of water), they're actually good.
Furthermore, we just happened to have everything on the surprisingly short ingredient list except the sprouts and the dates! We even had the oyster sauce from a brief but enthusiastic jump into Chinese cooking brought on by previously living right by an Asian supermarket. 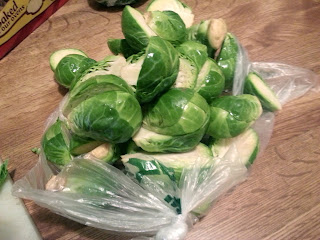 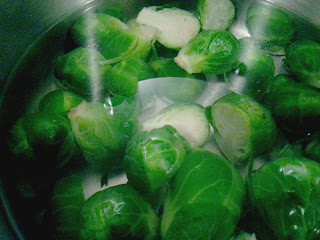 We calmed ourselves by promising that the recipe said they only boiled for one minute. A pot of vegetables can't possibly turn completely bitter and dead in just one minute, even if it is Brussels sprouts, right?
Well, in one minute, the smell coming out of this pot was utterly foul. There is only one place for the stink of boiling sprouts, and that is Madame Tracy's fortune-telling in Good Omens. The dreadful smell was only the beginning of how bad this recipe would smell before we were done. We were cursing the fact that the kitchen has one of those stupid recirculating vent hoods that makes a lot of noise but does absolutely nothing about the smell. Had we known the boiling stink was but a small taste of the awful smells this recipe would inflict on our unvented kitchen, we may have cancelled it. Instead, we moved on to... 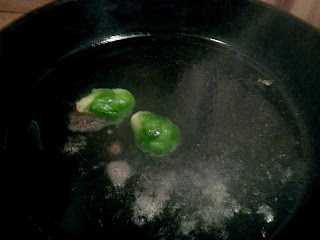 At this point you know this recipe was either written by someone who cooks a lot or someone who never cooks at all. See all the angry spatters in the hot oil? Try carefully laying a lot of slimy green things cut-side down with water spats making little burns all over your hand. If someone cooked a lot, they'd be numb to it. If someone never cooks at all, they wouldn't realize they were about to get small stinging burns from the wrist down. Anyone who fell between those two extremes would know the boiling spatters were coming, lack the calloused hands for it, and never write a recipe like this.
We'd like to think this recipe comes from someone who has one of those pseudo-industrial kitchens where the stove is the size of a stainless steel grand piano and the ever-so-fashionable exposed ducting for the kitchen vent takes up half the ceiling. It makes more sense that way. You need a really strong fan (that leads to a duct that goes out of the kitchen, not a stupid hood that blows it all right back into the room) to keep the stink out of the house or keep the smoking oil from setting off the fire alarm. 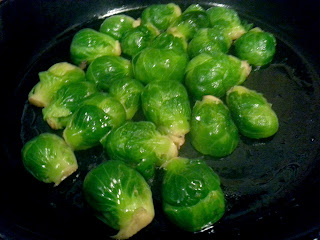 This is such a tedious, time-consuming way to produce cooked sprouts that are browned on one side. You have to push them about carefully, making sure none of them flip over. Then you have to check each one to see if it is in fact browned underneath. Of course, it's hard to tell which ones you looked at found weren't ready and which ones you haven't turned over yet- especially while you keep shuffling them around the pan to try to get them evenly cooked.
This recipe seemed more and more like the creation of someone who grew up eating boiled vegetables until it got firmly set in their mind that boiling is The Way We Cook Them. Either that, or this is meant to be one of those summer recipes that supposedly saves heat by keeping the oven turned off at all costs, even if it means a steaming pot of boiling water and a smoking skillet. We could have gotten the exact same result without the loss of water-soluble vitamins (which we care about only when bitching about how terrible boiled vegetables are) by putting the raw sprouts on a baking sheet and putting them in the oven. It also wouldn't have set such an unholy stink of smoking oil and boiling sprouts upon us.
On the bright side, the sprouts actually looked kind of pretty.

All right, we were closing in on the end of this recipe. Now we finally get to dump everything back into the skillet and within minutes, call this done. 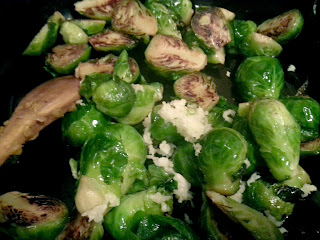 I am so glad this recipe has garlic in it. Garlic is what allows us to try all manner of things we think sound icky. It's like training wheels for whatever food you fear eating. No matter how terrible something may seem, you can put enough garlic on it and reassure yourself that even if you are about to eat twice-cooked possum, at least the twice-cooked possum will taste like garlic. However, cooking the garlic only made the stink in the kitchen worse. But that was nothing compared to the utterly foul stink we had once the boiling oyster sauce got added to this. Oyster sauce is kind of like fish sauce, which as we found out when we dumped an oversized splash of it into a chicken recipe, smells terrible in the bottle but cooks down to something mellow and nice. Given that the kitchen had the sort of foul smells that usually come from the cooking of someone on a punitively self-righteous health kick, the mellowness that the sauce would cook down to was no consolation at all.
All right, we've got this thing done. Let's first see the high-dollar magazine fantasy world version of this: 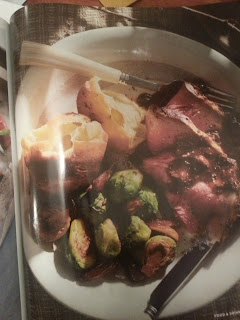 And now, the reality:

Honestly, for how awful the kitchen smelled after making this (and the stink lingered for most of the night), this was pretty delicious. There was just enough butter to make the sauce on these kind of velvety, but not so much it turned greasy. The dates were sweet, but not in some weird candied way that would have clashed with vegetables. The only things I'd recommend are first, bake the sprouts and then throw it all together in a pan once they're done, and second, be sure to purchase a soft and relatively sweet variety of date. There are many, many varieties of dates (as anyone checking the Wikipedia page will find), so I'm not going to bother naming which. But some dates are really hard, almost like hollow, thin carrots, and some are soft like really big raisins. The second type are the kind you want for this recipe.
And if you do decide to boil the sprouts and brown them in a frying pan like the recipe says to, I hope you have a really powerful, ducted vent in your kitchen.
Posted by S. S. at 2:06 AM