As we've mentioned before, we at A Book of Cookrye really love brownie recipes. We have multiple recipes on file for different kinds of brownies- hypersweet brownies, super-dark and nearly-bitter brownies, extra-gooey brownies, not-the-best-but-they-only-take-half-an-hour brownies... and so, when we saw this recipe, it seemed like a personal challenge from the writer!

We at A Book of Cookrye approached this recipe not with skepticism at such a daring claim right above the ingredients list, but with excitement. Surely anyone with the nerve to put such a note above her recipe and her name below it would have made damn sure it's a good one. Therefore, we were dead certain that these brownies would be divoon. 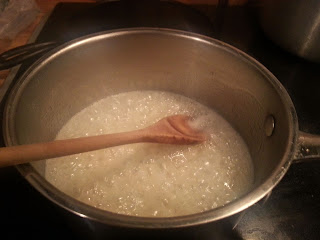 As we set the pot of stuff to boil, the allegedly best brownie recipe ever looked an awful lot like making fudge. However, concern arose because every other brownie recipe we've ever made uses an ungodly amount of butter (or shortening which I feel kind of guilty about). Like, half a box for a 9x13 pan's worth. We'd started to think gobs of butter were necessary for your batter to turn into brownies. But this recipe uses just a quarter stick of it.  That's only one eighth of a cup. You'd use more butter making two grilled cheese sandwiches. 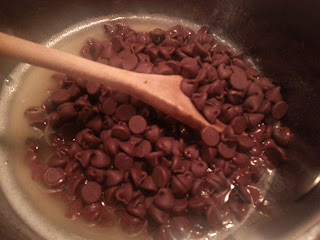 Were we going to literally bake fudge? The chocolate chips and the boiled stuff look like slightly runny fudge. Did someone make a batch of fudge one day, fail at it, and decide to throw flour and eggs at the problem in hopes of salvaging the mess? 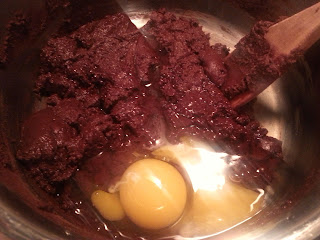 Here it must be noted that to absolutely no one's surprise, this brownie batter was shaping up to be absolutely delicious. However, as a recipe note, a whisk was required to flog out the last lumps of whatever refused to mix in. 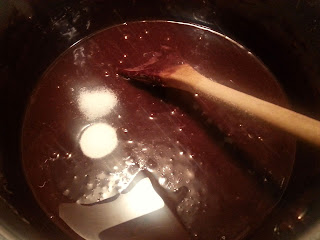 All right, we're dumping in the last of the brownie things and this batter is getting harder and harder not to eat. Of course, we at A Book of Cookrye routinely have difficulty not eating brownie batter, so this is in no way unusual. Behold how lovely and scrumptious this pan of chocolate goo looks!

When removed from the oven, we had what looked like amazing, crisp-crackly topped brownies! However, since it was the middle of the night, we chose to bake them in the special outdoor oven we got to prevent fumigating the house with our love of garlic. It appears that if we're going to attempt to bake things for others in said oven, we need to do something about the tilted table on which it rests. Or, more realistically, glare at anyone who complains about a slanted cake and tell them that anyone who is so nitpicky about dessert didn't really want any. 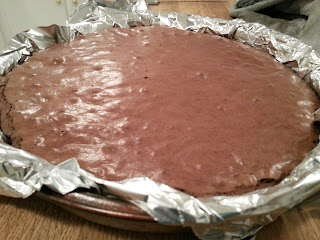 As the brownies cooled, they grew a sinkhole. This did not make us worry about whether the recipe was a failure. It just meant that what was previously just baked chocolaty goodness was turning into even denser chocolate stuff. 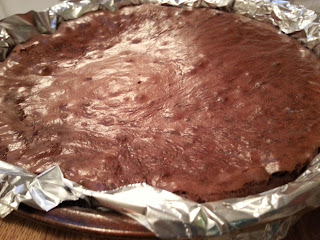 Besides, even if we worried about the appearance of brownies (which is a daft thing to worry about),the recipe came with a built-in concealer. 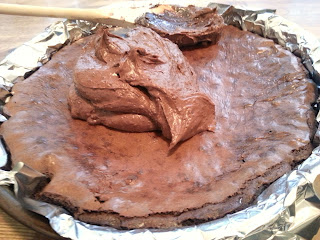 See? You'd never know the brownies collapsed on themselves. And since the icing and the brownies are nearly the same color, the crumbs that got in the icing barely show up! That is the only reason these brownies have such confidently-swished swirls of icing on top. However, upon tasting the icing, I lost a substantial amount of faith in what I had just made.
Anyone looking through my previous culinary perpetrations will notice that there are a lot of desserts. Furthermore, as I think I said somewhere in a recipe that used a can of the stuff, when I was on an all-liquid diet following a wisdom tooth removal, I may or may not have eaten condensed milk out of the can. With all that said, the icing was too sweet even for me. It tasted like straight powdered sugar with a little cocoa that fell in by accident. I know the deep shade of brown makes the icing look really chocolaty, but it's not. 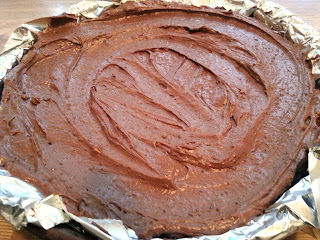 Forcing aside misgivings and assuming that the icing recipe that went with the brownie recipe was the perfect amount of the perfect topping (something anyone claiming to be writing the best brownie recipe ever would surely ensure), we dumped the whole bowl of it on top. As you can see, any one piece of what's in the pan appears to be about equal parts brownie and icing. However, the brownie underneath the icing is tantalizingly near-black with (presumably) gooey chocolaty deliciousness. 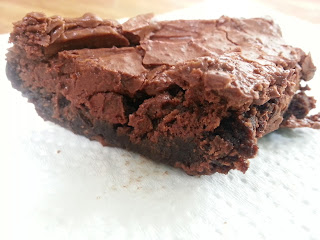 Upon tasting it, I recognized the brownies immediately from countless pot lucks I've been to in the past. This has never happened to me before. There have been a few things that were familiar, but this is the first time I've ever made a recipe and, upon tasting it, known that I've had this exact thing before. It's oddly disconcerting.
That said, the icing was too sweet and there was too much of it. Like, you couldn't taste the brownies at all for the powdered sugar overload. They were actually bitter and kind of salty under the barely-diluted powdered sugar the recipe said to put on them. It tasted like really cheap mix with that weird chemical aftertaste that no amount of canned icing covers.
However, if you scraped the icing off, the brownie under it was in fact really good. This recipe may merit an uniced revisit to see if, when left without gobs of powdered sugar on top, they live up to the recipe's claim.
Posted by S. S. at 7:02 AM