We at A Book of Cookrye would like to extend a laurel and hearty handshake to Marcus, for he has arrived at a new apartment! Marcus and I kept meaning to convene at his new domicile, but (miserable realities of adulthood being what they are) never seemed to both have the time at the same time. And so, a full year after he has moved to his domicile, we were finally able to christen his kitchen! (Yes, it was already well broken-in and therefore beyond christening since he's been living there a year, but that is a minor point.)

Unfortunately, the one night that both of us had open with neither an engagement that evening nor a morning shift to wake up for, it was time for new groceries to be purchased. Whatever would we make in a kitchen that has so little? We found a handful of strawberries which looked remarkably edible for a week in the refrigerator. Usually they're mold-coated and oozy, these were just kind of shrivelled. 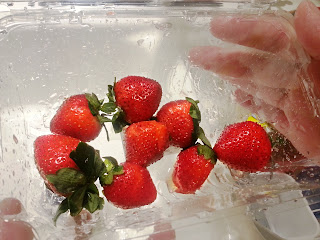 Also, we found lurking in the back of the refrigerator a mostly-used can of condensed milk. We didn't know what we would make of any of this, but it seemed a blender would be required for wherever this took us. 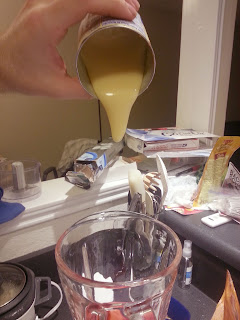 The condensed milk had dried out in the refrigerator. I admire the restraint of anyone who can have a can of such deliciousness in their refrigerator for so long without just eating it. This poured out so slowly you could make the drop falling out of the can wobble and shake.

We didn't know if this blender full of stuff would become part of a batter, turn into a pie, or turn into a highly-sweetened failure. But while we didn't know what end result we were going for, it seemed pretty obvious that the next step must be to turn the blender on. 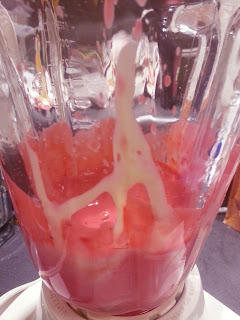 Holy snizzbat! That is the fakest-looking pink I've ever seen come from anything that didn't involve half a bottle of food coloring! Marcus and I both tasted this and agreed it needed to be spiked. You ever taste something and just implicitly know it will taste better with alcohol in it? I don't mean those oversized slushee things with umbrellas in them that are used as training wheels for those who wish to get drunk but cannot tolerate the taste of alcohol. Those are used to cover up the taste. This creation, on the other hand, seemed like a little alcohol would complement the sweet strawberry mess in the blender and make it better.
However, neither one of us wanted to get drunk this particular evening. While discussing the merits of liquor as a flavoring vs whether anyone will be inebriated after drinking it, somehow the phrase "about the same alcoholic content as cake batter with vanilla extract in it" came out. Whereupon we took the idea literally and added a splash of vanilla. (Side note: does anyone else think that foofy vanilla vodka is just that clear vanilla extract in a bigger bottle? Both taste like vanilla and are about 40% ABV.) Having resolved this, we decided to just throw in a couple fistfuls of ice cubes and call this creation finished.

I already knew how it tasted because I'd been testing it by the (daintily-dipped) fingerload the whole time. But what does Marcus think? After all, it's his refrigerator we're cleaning. 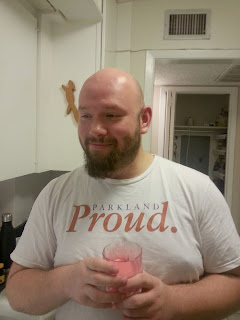 Considering that he knows how long all of this has lurked in his refrigerator, he was pretty blasé about this. 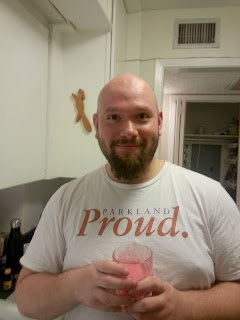 And indeed it does! The condensed milk and strawberries with nothing added had tasted like... well... condensed milk and strawberries. But adding about two capfuls of vanilla had not only made them stop tasting like two separate things, but added that extra... that extra something or other. It tasted exactly like what we have gotten many times from many a drive-thru.
Given how very little fruit or dairy goes into fast-food shakes, the resemblance astonished me. That said, as someone who really likes drive-thru shakes, these were fricken amazing. Also, the refrigerator is now cleaned (or closer to it).
Posted by S. S. at 1:07 PM