We at A Book of Cookrye have been thinking about the world's oldest brownie recipe. It looked like a recipe for what would be like blondies with extra molasses. Since we at A Book of Cookrye really like both blondies and molasses, the idea of chewy, gooey molasses squares sounded amazing and perfect. However, they turned out to be like gingerbread. 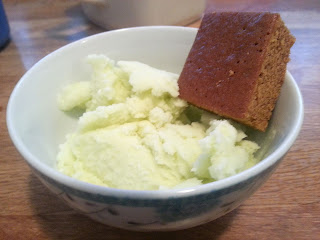 Not to lie, this recipe makes really good gingerbread. We made it again, adding some shakes of various spices, and didn't tell anyone the recipe was originally supposed to be brownies. It was kind of like when we got these delicious soft cookies from a recipe that was supposed to make gingersnaps. As long as one don't tell anyone what they were supposed to be, people liked them a lot. But in the case of the brownie gingerbread, the recipe's failure to turn into what we'd call brownies (or blondies) was disappointing.
As lovely as the gingerbread was, we were hooked on the idea of really dark molasses brownies and tried to make them happen. We tried messing with various amounts of the things in the recipe to see if it would go from a dense cake to a brownie. We even looked through the nerdier cooking websites to see what it is about a brownie recipe that makes it turn out like chewy brownies and not like cake. Believe it or not, the question is little answered. A lot of people have made recipes for what looks like baked oil-paste and claimed that is the perfect brownie. We at A Book of Cookrye would argue that they're making a carrot-free, chocolate-flavored version of the many carrot cakes we have unfortunately made.
And so, we at A Book of Cookrye decided to drop the original recipe, start with our favorite brownie recipe, and just replace half the sugar with molasses. Either we'd get the lovely, fudgy molasses brownies we dreamed of, or we would get a nasty mess that would discreetly fall into the trash can.


Even if these failed, at least they would fail while being wonderfully dark and full of molasses, just like we wanted. 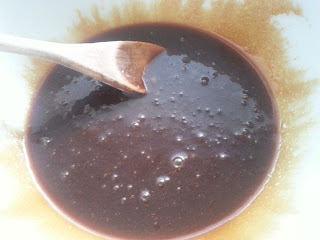 As one might suspect when half the sugar is replaced with syrup, the batter got a lot runnier. We didn't have to spread it into the pan, we just dumped it in. 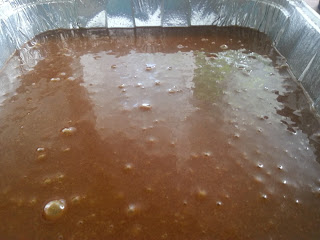 We had serious misgivings when we removed this from the oven. For one thing, even though it tested done when poked with various implements, it didn't seem baked. It was like a pan of molasses-flavored Silly Putty. It really seemed underdone when we tried to cut it. Besides, the top looked oddly cratered. We considered baking it longer, but then reasoned that putting it back in the oven would only harden it until it threatened to break one's teeth. 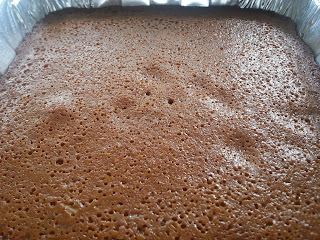 But miraculously, they got firmer as they cooled, which confirmed our suspicions that had we baked them hard they would have cooled into molasses rocks. Since we took them out of the oven early, we had delicious molasses squares! 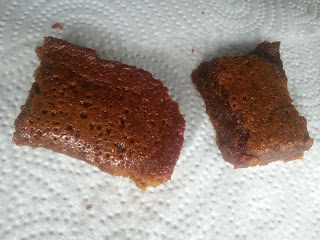 Look at them! It's like molasses held together with a magical force-field. They are perfect. They're all I wanted this recipe to be.
Posted by S. S. at 5:05 PM