Hudson Sandwiches: Usually, you grind the meat before you cook it

Before we get to the fun of shoving questionable things through a meat grinder, we at A Book of Cookrye have some freaking exciting news! Cook In/Dine Out has featured our pecan pie recipe! I gotta admit, I was really excited about that. Someone else actually tried something I posted! Check it out here! He even came up with precise cooking temperatures rather than my "just eyeball the sucker" instructions, and based on the pictures it looks really delicious. Also, it seems every repost of the recipe starting from the original uses more pecans than the one before, which just goes to show pecans are delicious.

I don't know about you, but most of my beef comes from the discount section of the meat freezer. When your beef routinely has little brown-tinged spots on it, the idea of having it rare seems really daft. I tried slowly stewing a roast just until it was done, and... well... you know that scene from National Lampoon's Christmas Vacation where they try to eat the turkey? Usually, when stuck with meat like that, I pulverize it, slather it with barbecue sauce, and call it done. However, today there was no good barbecue sauce. Since the meat was already really tough anyway, there was no harm in trying...

This comes to us from the same book as the absolutely delicious and wonderful slice-and-bake butterscotch cookies. Mrs. George Thurn makes some really good desserts, but is her sandwich table any good?
At any rate, with Thanksgiving coming up followed shortly by Christmas, it seems like a good time to bring out recipes that involve using up leftovers. In fact, all we had to do for this was pulverize a bunch of stuff in the refrigerator ...or so we thought. We had to boil eggs.

Fortunately, some friends were downstairs. We watched a lot of stupid videos. We repeated Beyonce blessing the children a lot.
This is the first time I'm voluntarily making something with olives since the "chicken" "pie" disaster which I may never recover from. Therefore, I bought loose olives because I don't want a jar of them staring at me from inside the fridge. Since I got them from the middle-Eastern store, each one held a surprise: 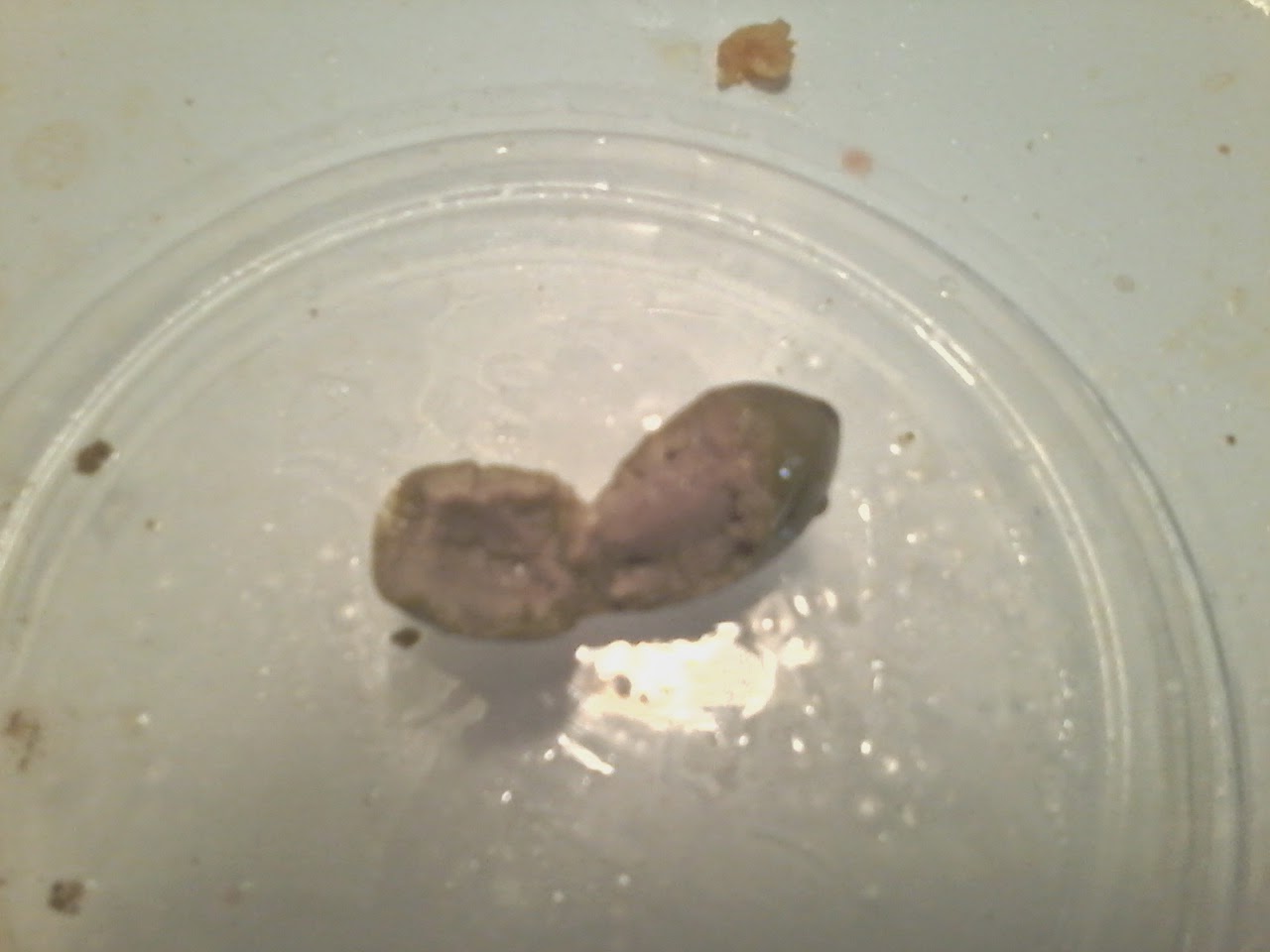 It's hard to tell, but that's an olive with the pit still in it. Being from the United States, and therefore used to food sold at Americans, I've never seen an unstoned olive before in my life. Removing the pit took only a few seconds (though it would have been longer had I wanted to keep the olives in one piece), but I couldn't get over having never seen one before.

I was soon thinking about how much less work eating is in America than nearly anywhere else. One of the people in this article about immigrants' impressions of the US until they moved said that in American food, you never find bones, the fish is already filleted, and so on- like you're serving it to children. Just as I've never seen an unstoned olive before, I've rarely see meat served on the bone/ Even fried chicken usually comes in "tenders" these days.
All right, I'm done musing. Time to grind stuff! 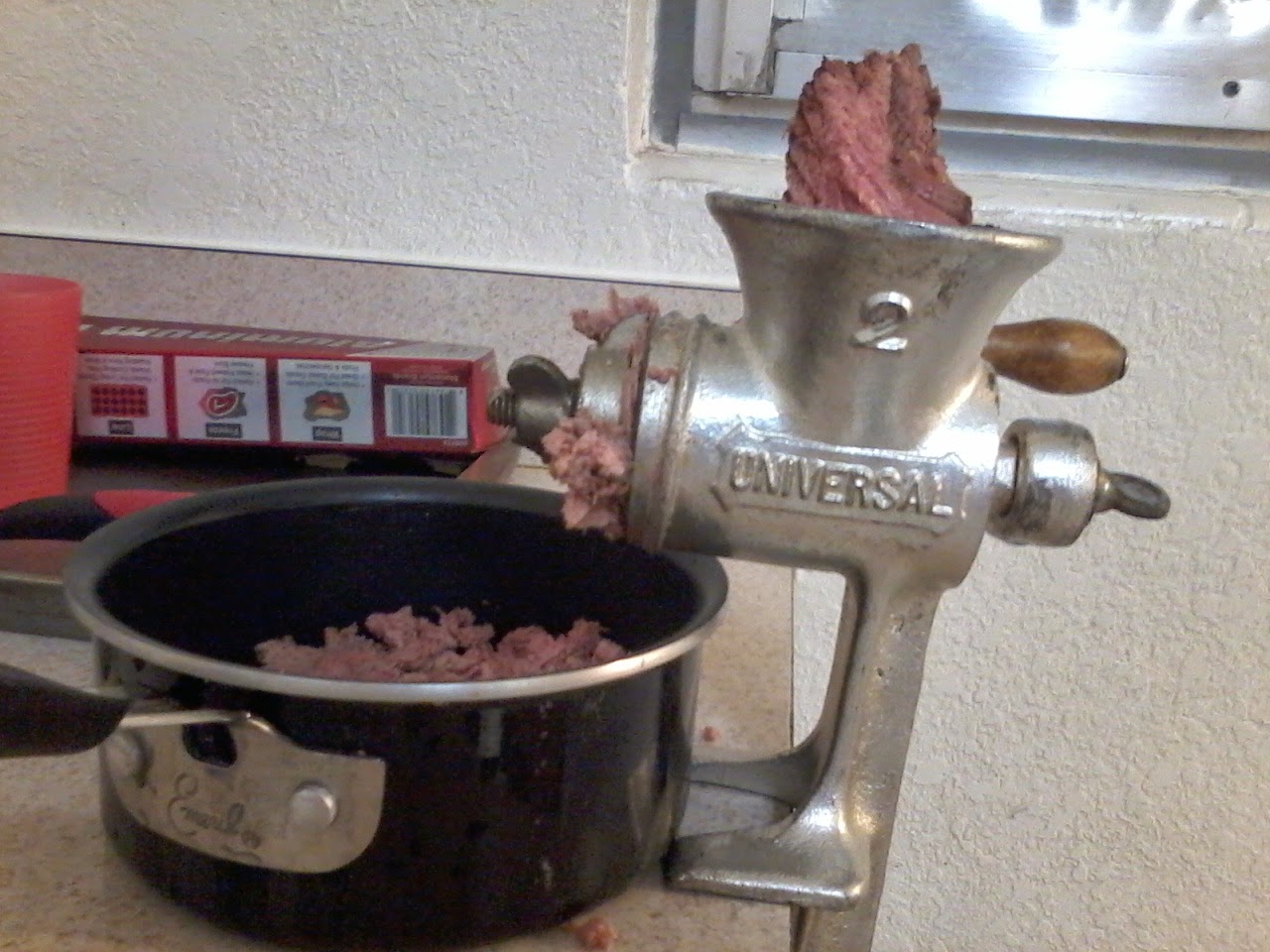 I left out the 2 spoons of shortening because duh. What is it supposed to do? Besides, I did a lousy enough job trimming the meat before grinding it that if the gratuitous fat really was supposed to do something, its function was covered. Seriously, why would someone just spoon shortening into their sandwiches?
Anyway, we started with tough roast, and ended up with... this!

There were still little fat globs in it, so we shoved it back through the grinder. We then had a handful of what looked like unnervingly darkened tuna salad and tasted oddly pungent. 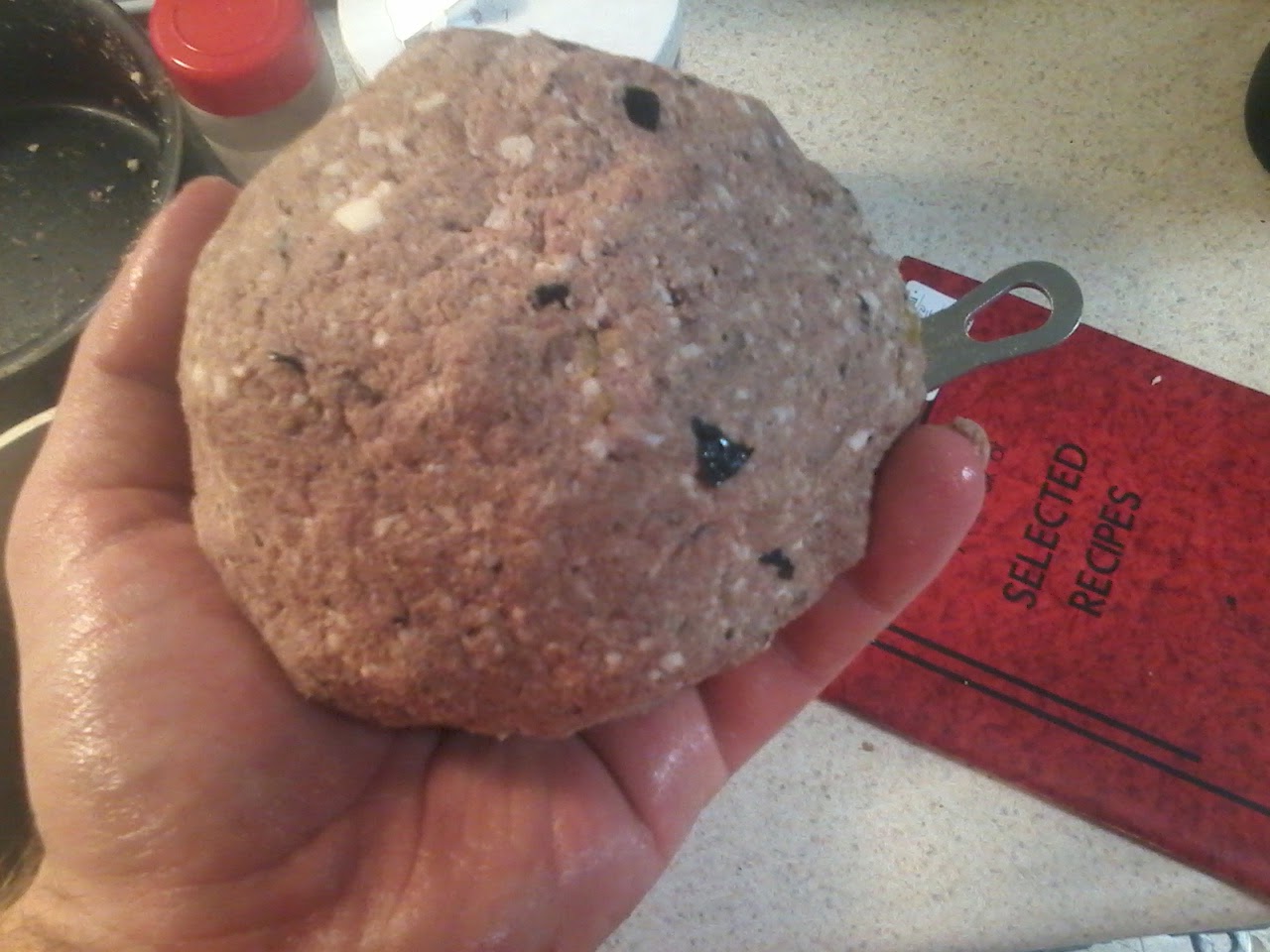 Now at this point, we're supposed to do some snazzy buffet presentation thing involving shrimp, parsley sprigs, and lettuce leaves. However, we at A Book of Cookrye live too far from the coast to trust seafood and don't need to set out sandwich trays. We do, however, have a long day tomorrow. 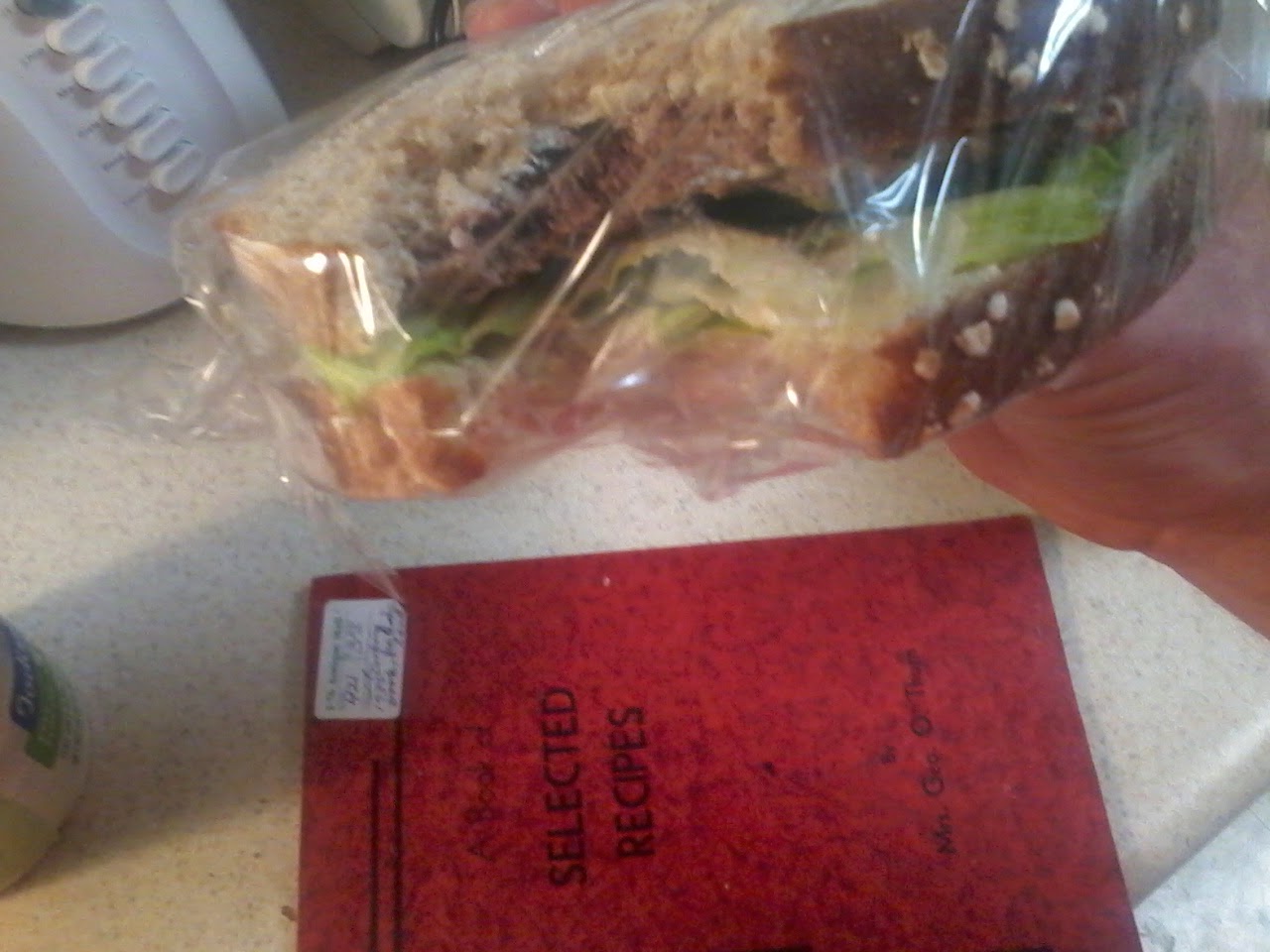 And how does it taste? When I first bit into it, it set off recognition bells in my head. This is like the sandwiches old ladies bring to church potlucks. The more I think about how often I make recipes from the '30s to the '50s, the more I'm surprised this is the first time I've ever thought this tastes like something my grandparents would have at their parties.
That said, the lettuce and wheat bread went really well with the meat spread. It balanced out the olives' pungency. The filling made the lettuce taste slightly sweet by contrast, in an unexpectedly good way. Honestly, they're really good. Also, those people who said to butter the inside of the sandwich weren't lying when they said it keeps the bread from getting soggy.
Posted by S. S. at 1:52 AM