Guess what we're cracking open for the second time! Yes, after the lovely, addictive kisses, we're getting out this Miss Leslie's Directions for Cookery in its Various Branches from 1837. Miss Leslie attended the first cooking school in the United States, so it seems only appropriate we should make her recipe for something so all-American it was banned in French schools: tomato ketchup!  Directions for Cookery has a whole chapter on "catchups" including mushroom catchup, lemon catchup, and what we're making today: 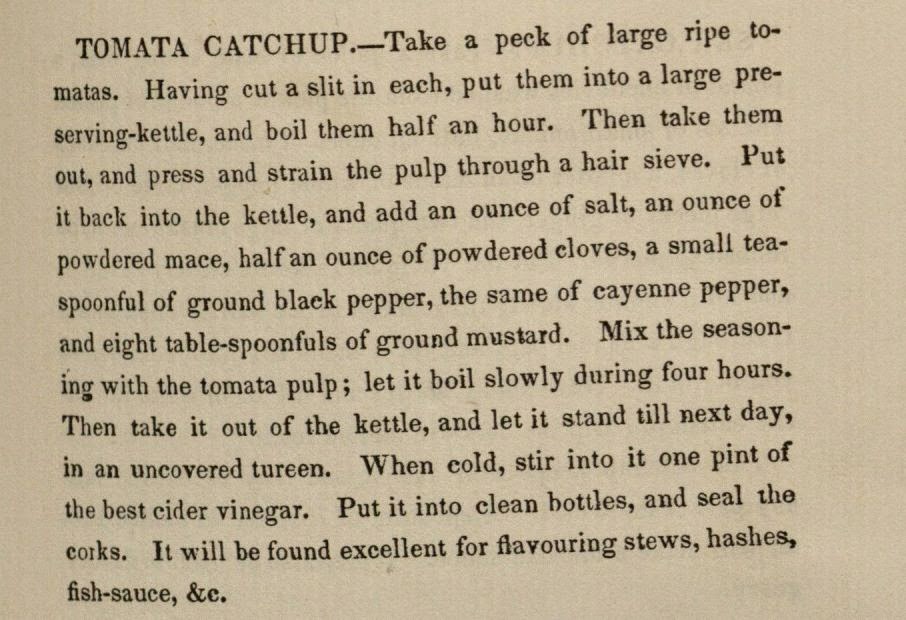 I'm getting a kick out of her ending tomato with an "a." Given she was from the northeast, do you think she rhymed "tomato" with "beta"?
Anyway, I regularly get my produce from the reduced shelf at the store. Usually getting this many tomatoes would be expensive, but since I got these from the iffy produce rack, they were stupendously marked down! I cleaned the shelf.

I had no idea how many tomatoes were in a peck, but this has to be enough. Having borrowed a sieve for the first part of the instructions and found two abandoned stewpots in the kitchen, we were completely set! 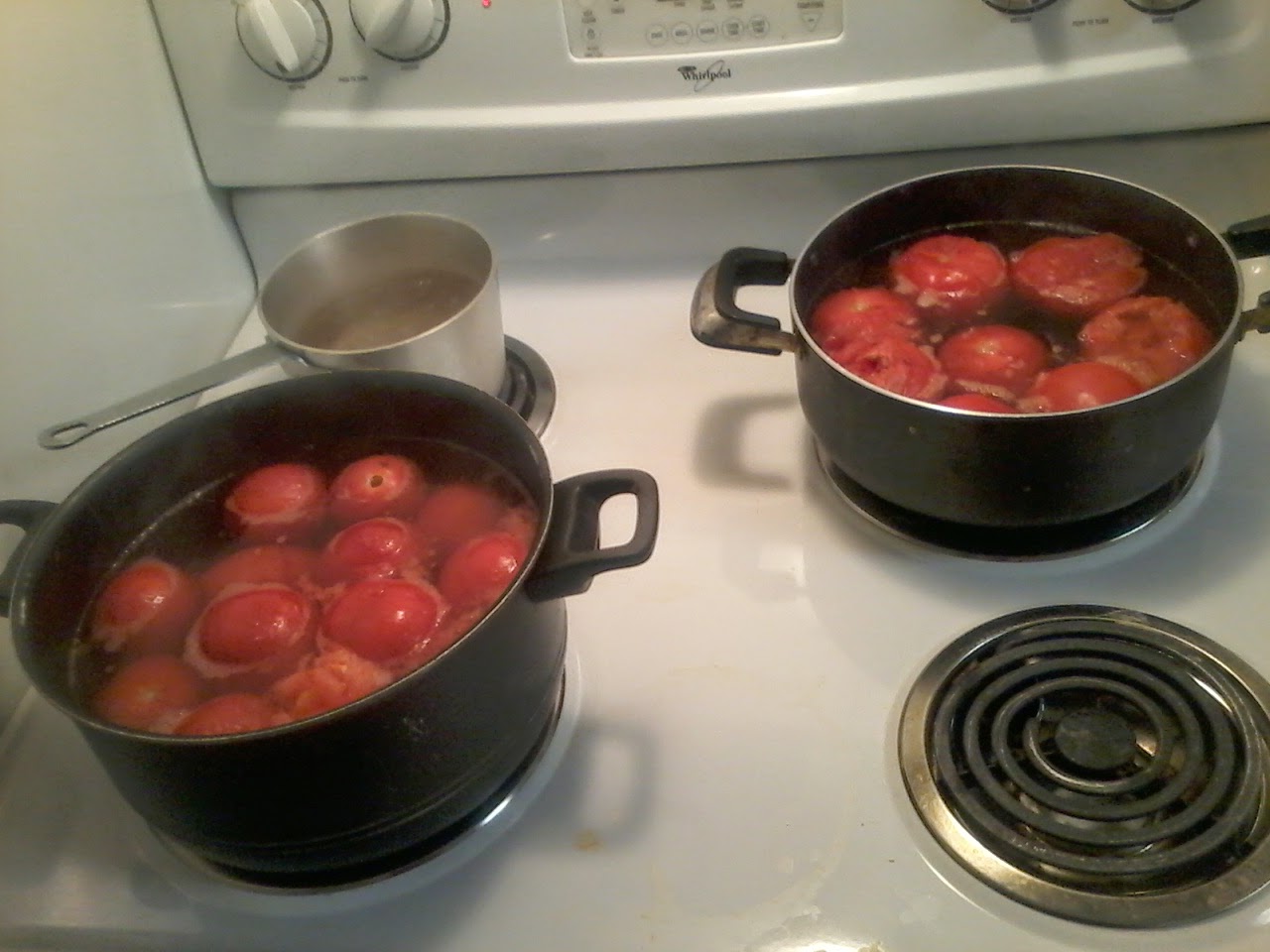 Having weighed them on one of the store's produce scales before checkout, there were 8½ pounds or so. Having looked online, a peck of tomatoes is somewhere between 10 and 12. Therefore, we're making two thirds of the recipe.

While they were boiling in the skins, I realized a lot of these spices were in ounces and I don't have a scale. Why some of them are by weight and some by spoons I have no idea. However, it might behoove me to figure out how much of what I'm going to add to the pot fairly soon. Fortunately, this ounces-to-spoons table turned up, so some middle-of-the-night math yielded the amounts I ended up using.

Having smushed the tomatoes through the sieve into the only thing we had to hold a sieve over, we had the bottom of a casserole's worth of tomato juice.

Having brought in someone's rice cooker to hold what wouldn't go through, we had this much leavings. Look at it! Despite smashing it at the wires, it leaked out juice afterward! 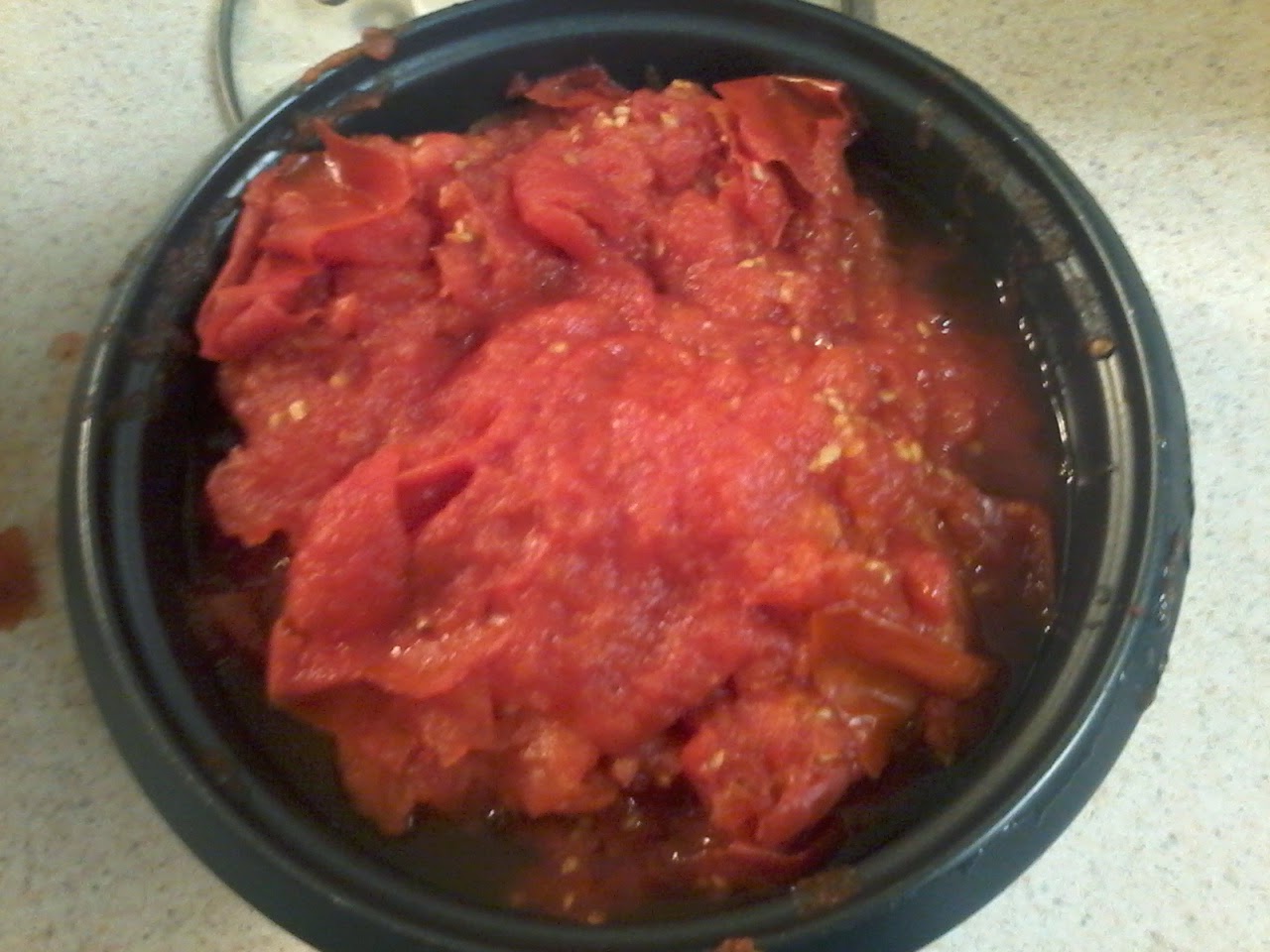 Clearly, we would need to try something else. Plan B was a blender someone left out: 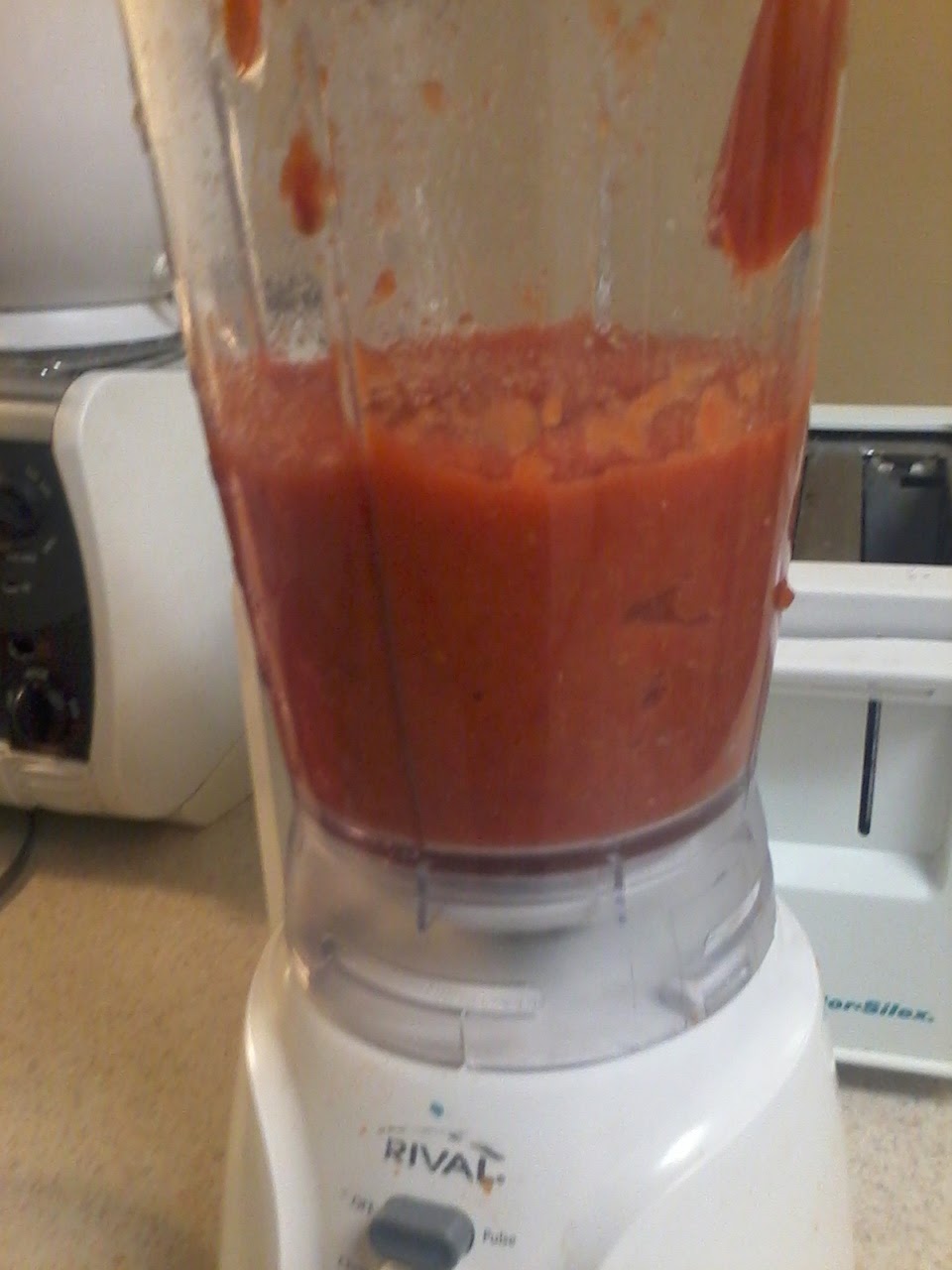 However, this refused to go through the sieve too. Incidentally, in addition to the sieving being a waste of time, I had to powerwash the sieve in the shower to get the last embedded tomato pieces out. I never thought I'd be glad for the "flay yourself alive" setting erroneously labeled "massage."
There must be a better method than mashing at things with a wooden spoon to force them through, which brings us to plan C. A common method for thoroughly juicing things is to wring them through cheesecloth, which I don't have. However, I do have T-shirts I don't really like.

About fifteen minutes of squeezing and twisting... 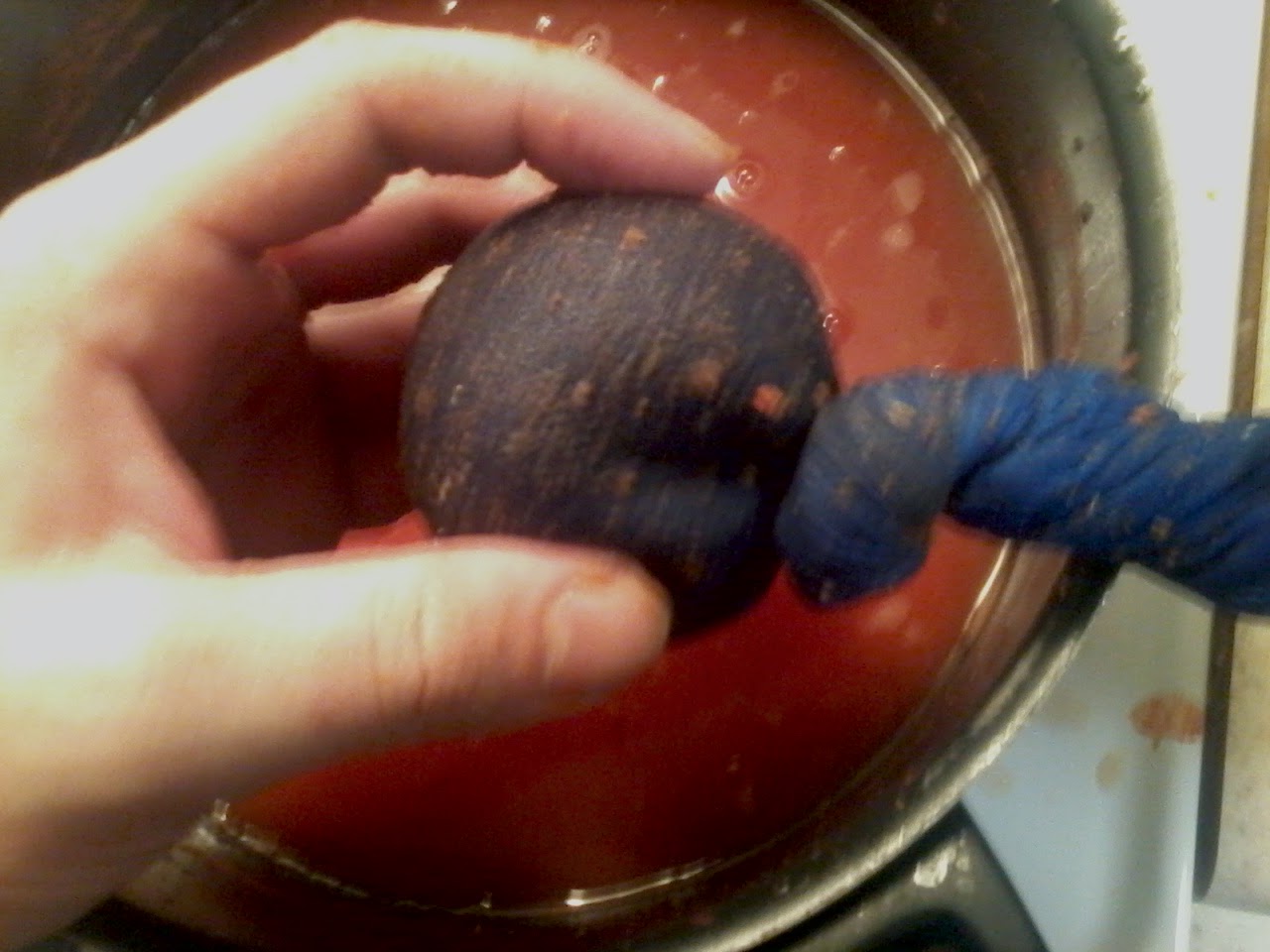 ...only this much tomato remained. 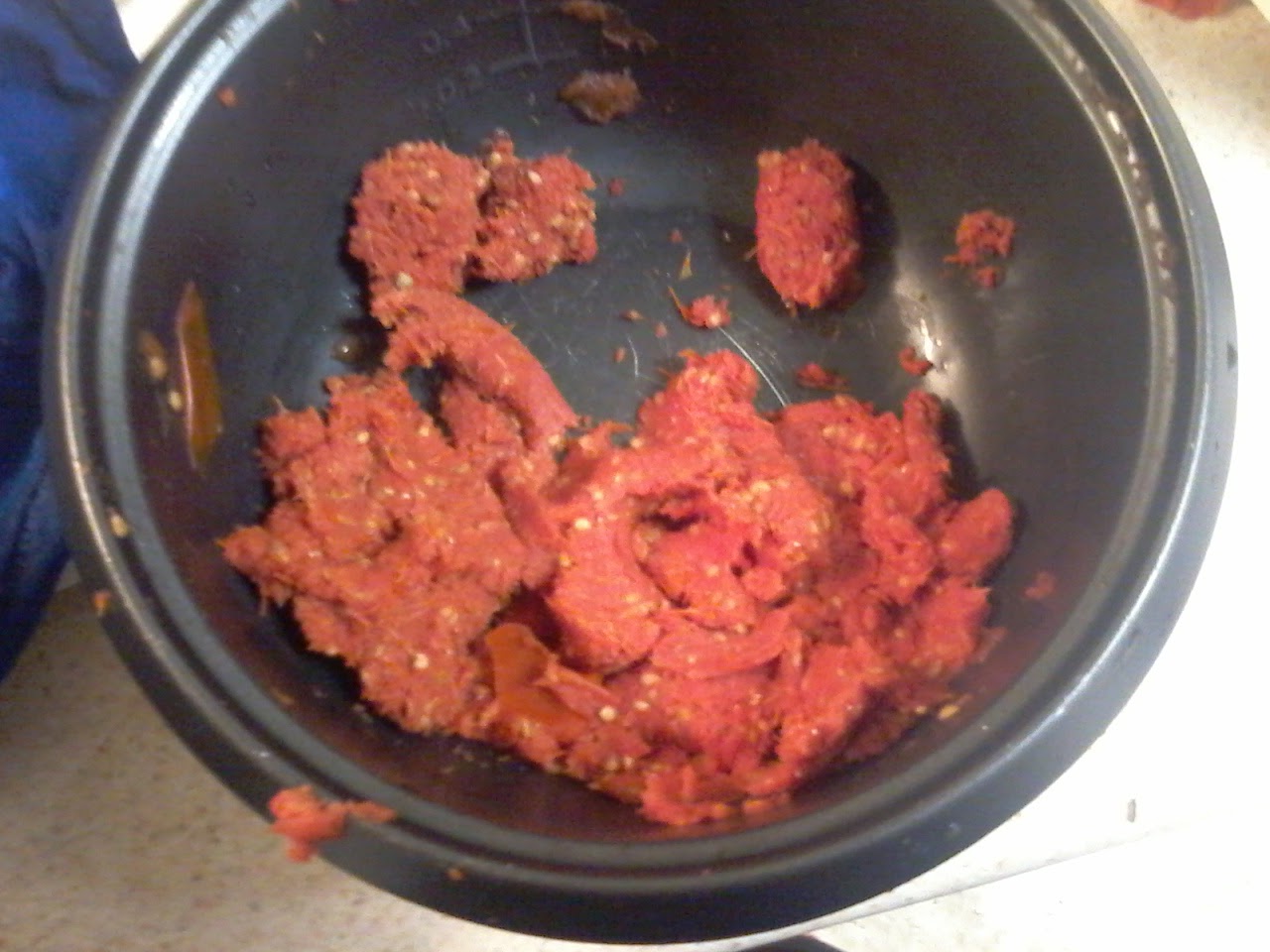 Since it was still kinda damp, I thought trying it in something made of thinner cloth might work even better. It ruptured and squirted tomato across the kitchen. 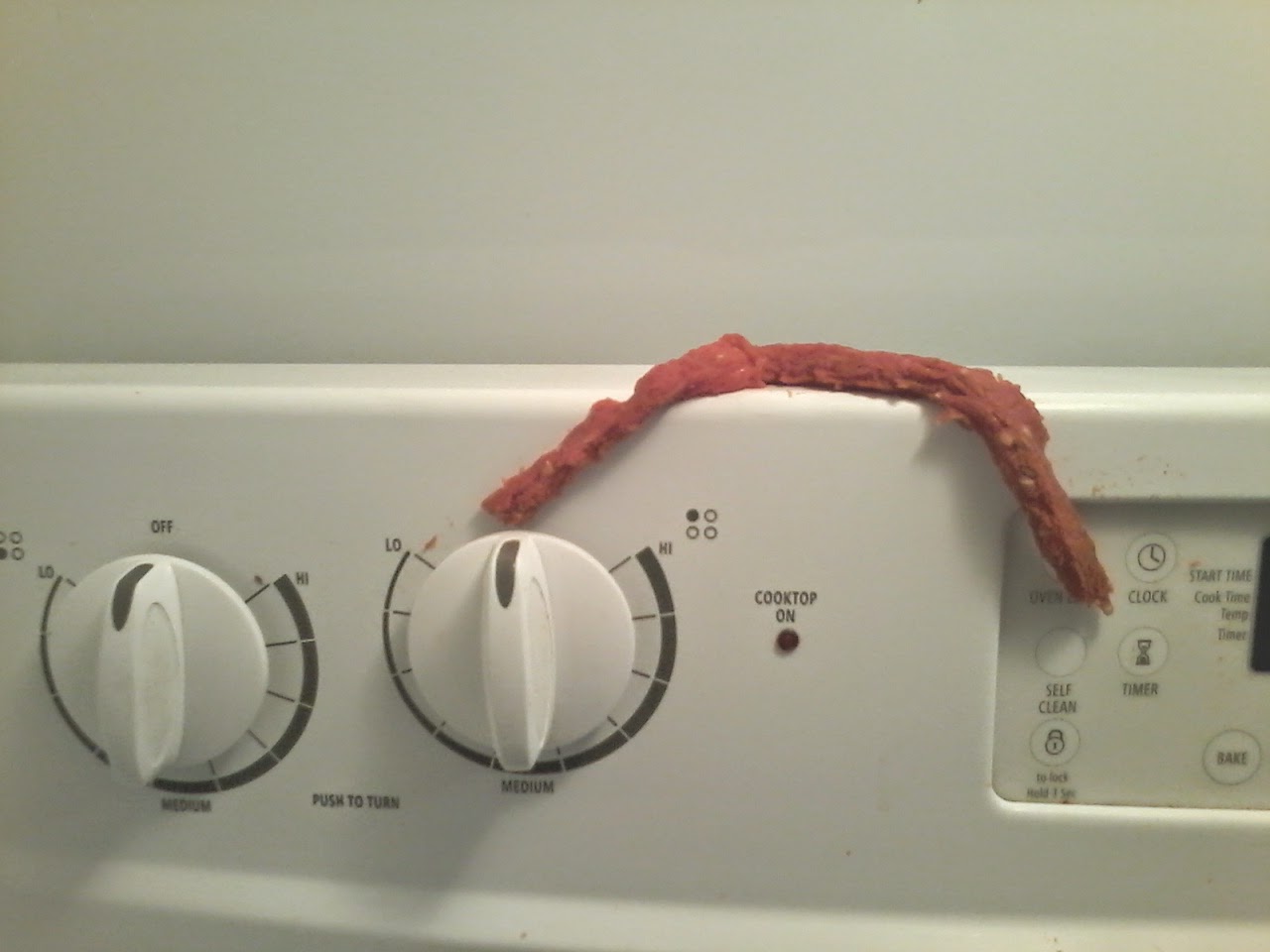 I thought about saving the pulp for something, but it was pretty tasteless. Therefore, on with the ketchup! Sometimes I veer off of the ingredients list or alter the amounts, but for this I didn't. I have no idea how this is supposed to work, so I stuck to the measurements. If this goes wrong, it's all Miss Leslie's fault. That's what I told myself when I put an ungodly amount of dry mustard into the pot, at any rate. 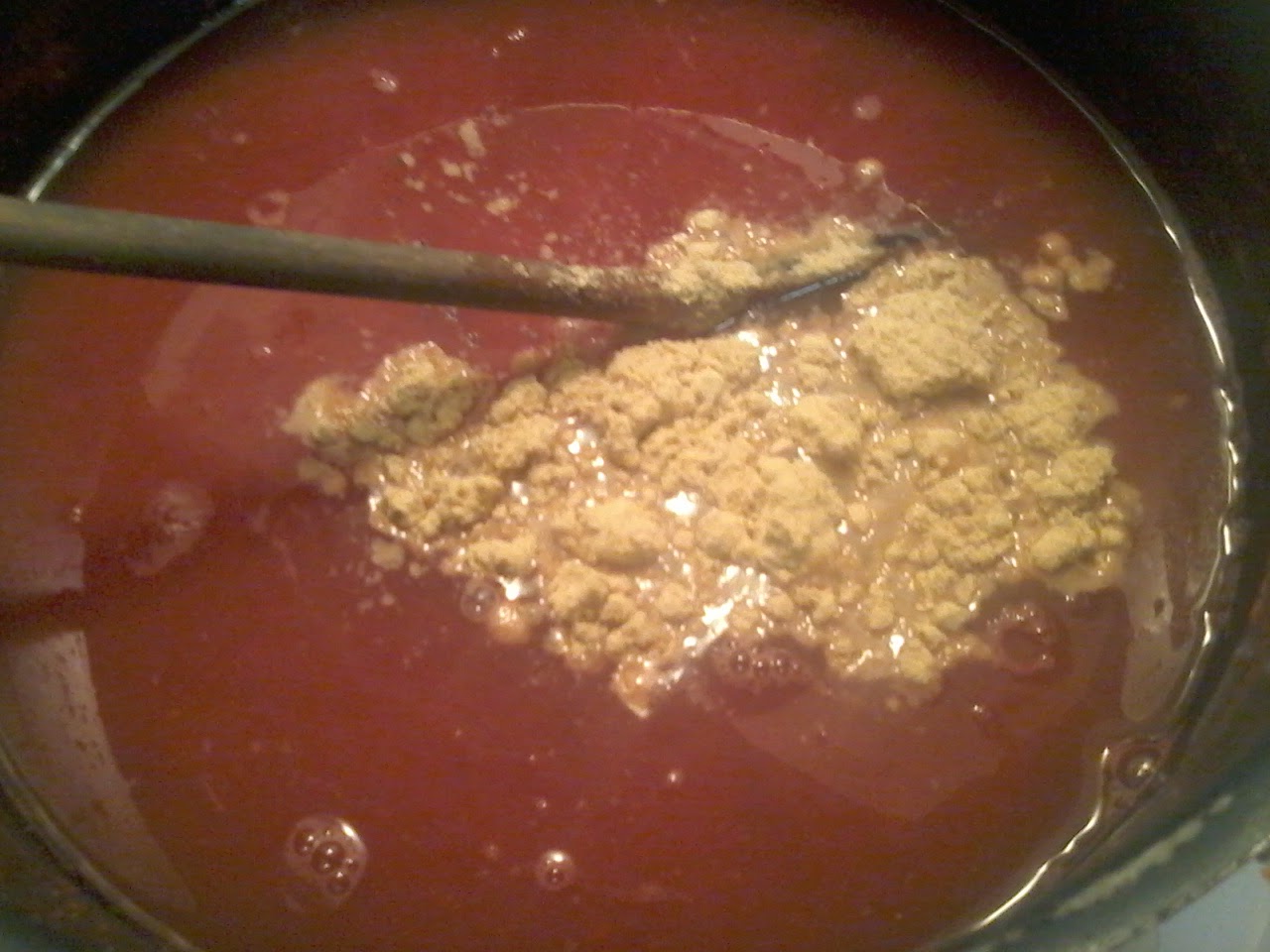 I had to chase down mustard globules and smash them apart with the spoon. 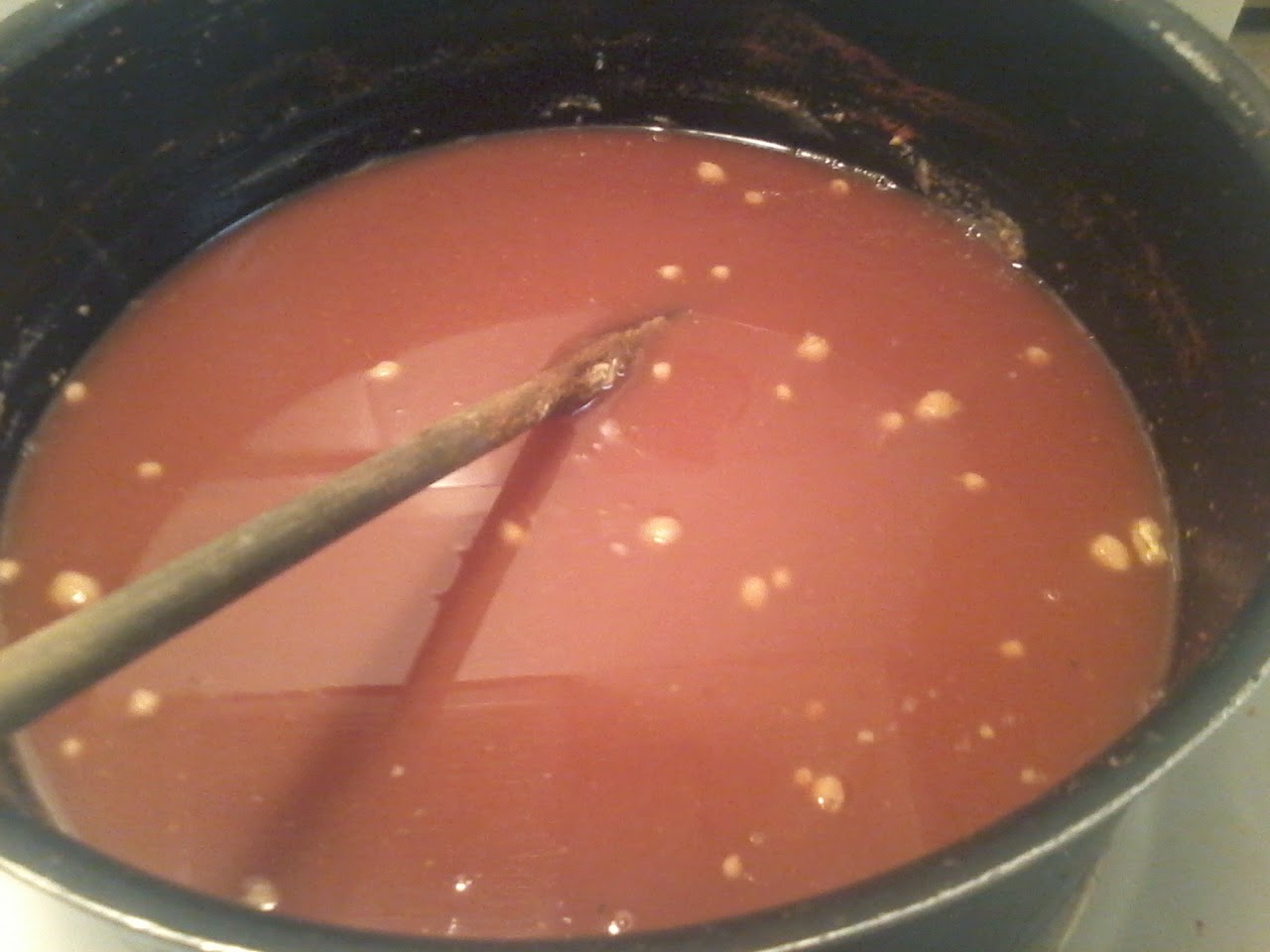 I tried some of the juice and it was bitter and nasty. Hopefully it would get sweeter as it slowly boiled for 4(!) hours. Whatever. I was already going to be awake; I had an essay to write anyway.
...or so I thought. It looked like this after two. 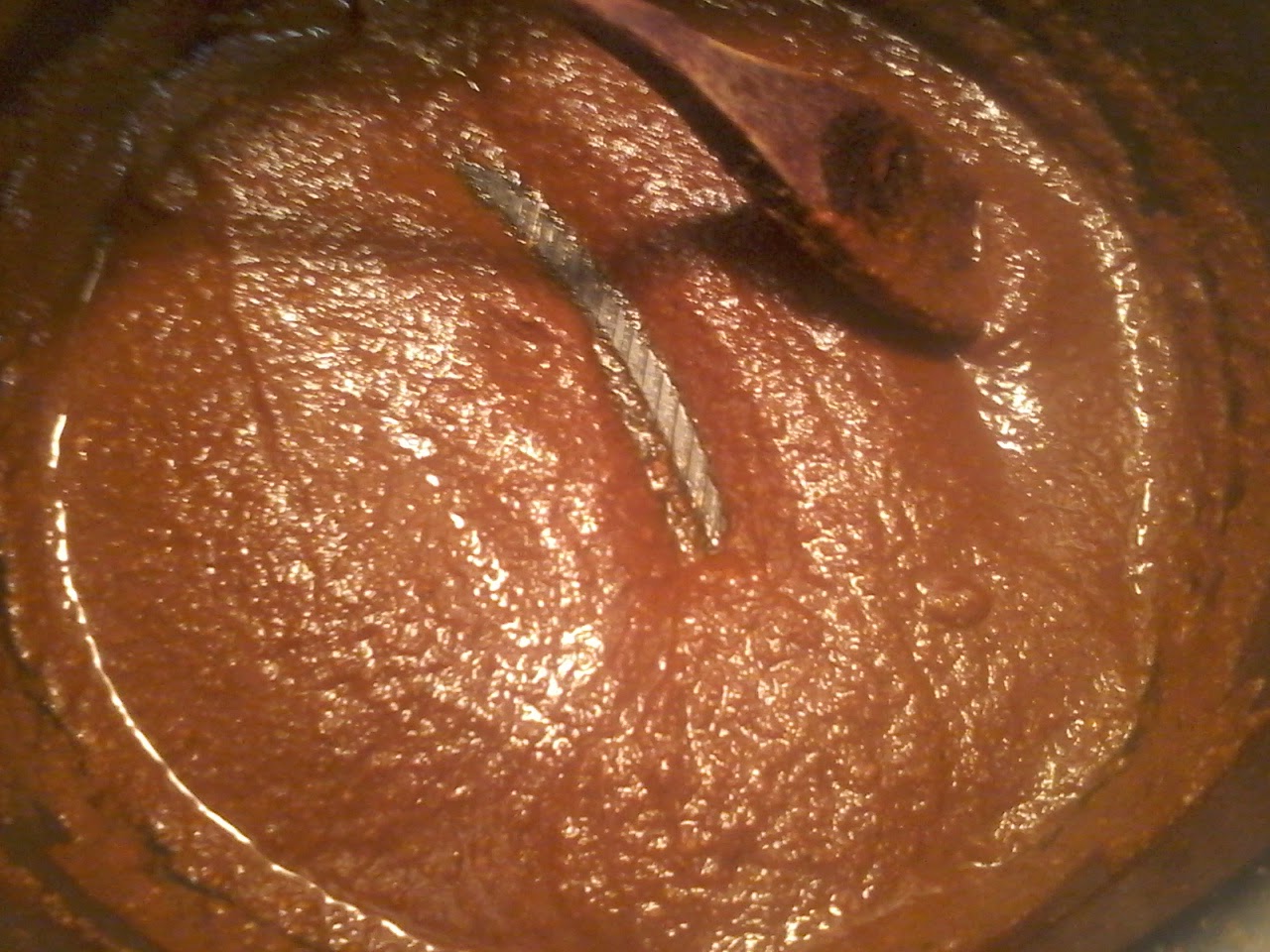 By now it surely would have lost its nasty bitterness and pungency, right? Wrong!

Since it was already incredibly bitter and nasty anyway, there was no reason not to make it violently sour as well by dumping in an unspeakable amount of cider vinegar. Incredibly, it tasted a lot sweeter once a good-sized cupful or so was in. I later found out that vinegar counteracts mustard just like milk makes hot peppers stop burning you. (That's why the mustard in Chinese restaurants scorches your tongue- it's made with water and not vinegar.) 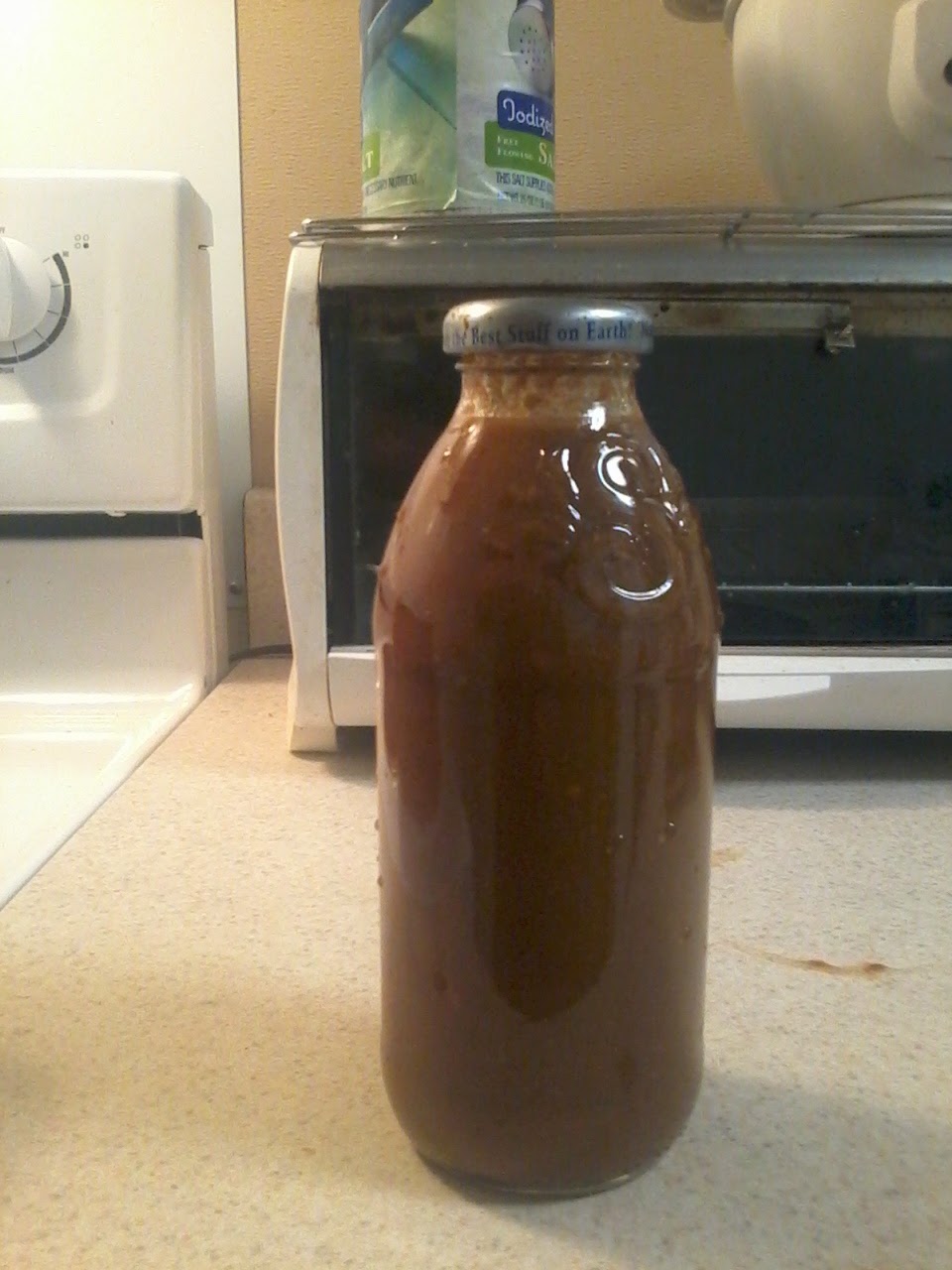 Let's analyze the results of what we hath wrought. The first thing you notice is it's really brown. I was expecting something this color: 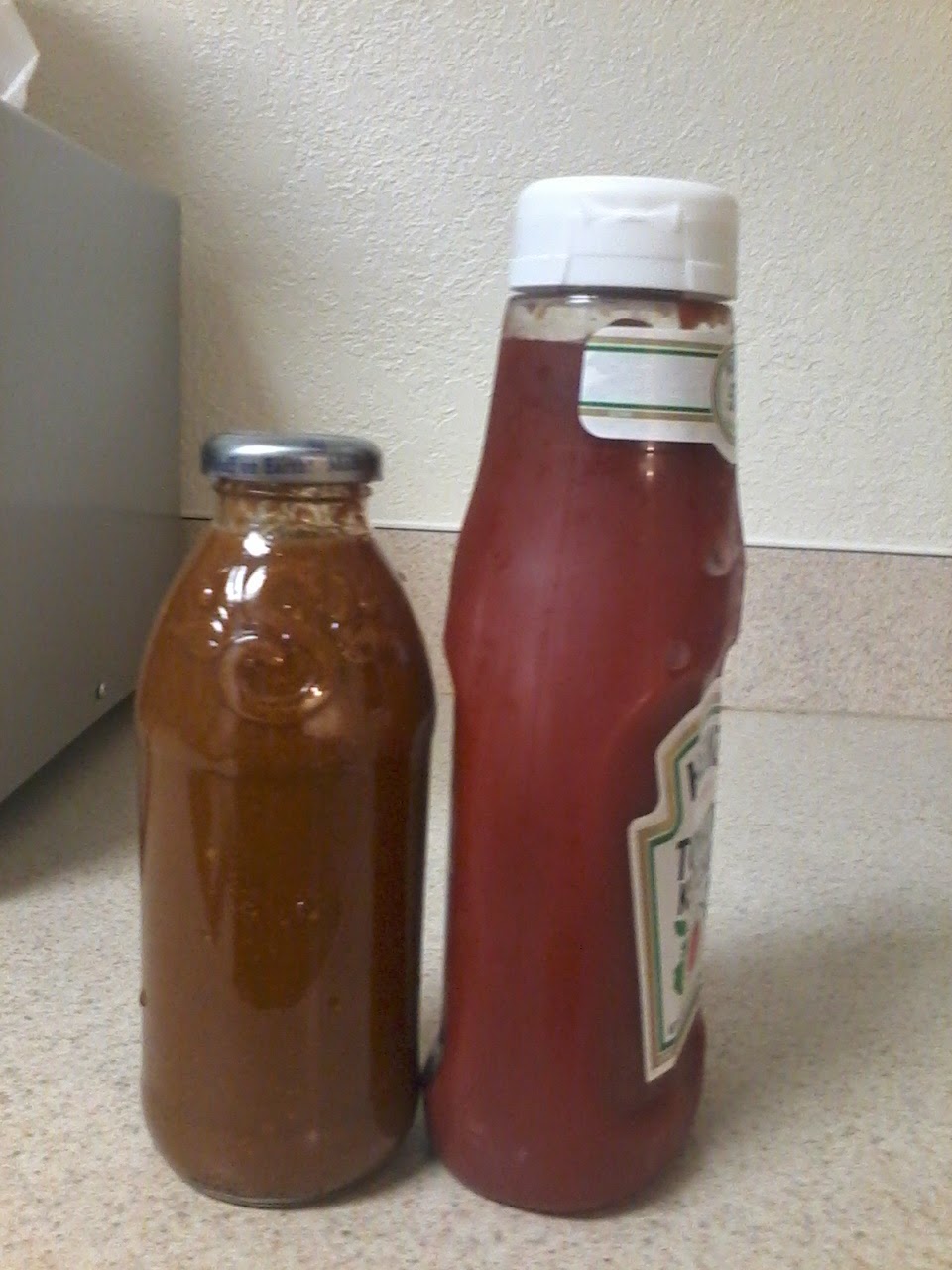 Having tasted a tiny drop on my finger, I got the idea this would be tasty.

Yes, I took a steak practically bigger than my griddle and cooked it in ketchup. It was amazing. A-plus, would do again, will totally watch for tomatoes to go on sale just to have this.

So let's get this out of the way: This is not going to taste good squirted all over French fries. It is not ketchup as we would expect. However, it is a really good, sharp steak sauce- delicious if used with a light hand, nice if added to soups (as the recipe says), and overwhelmingly pungent if poured on thick over fried stuff.
However, I see no reason why you couldn't just drop the raw tomatas in a blender and skip to adding all the spices and slowly boiling it.
Posted by S. S. at 4:00 AM