We at A Book of Cookrye are now signing up for the Historical Food Fortnightly! Yes, every two weeks, those who are daft enough to sign up get to do a different challenge that involves dredging up really old recipes and finding out why they're forgotten. Will we do all of them? Eh... maybe. We'll see.
This fortnight's challenge is... roasts! And guess what we at A Book of Cookrye are about to do to some unfortunate animal! Yep, despite the utter disappointment that was our last ancient Roman wine casserole, we're making... an ancient Roman wine chicken! That's right, we're going to be baking a chicken in a massive pan of wine. It seems we never learn from our mistakes, and are doomed to forever bake things in excessive amounts of wine in the name of antiquity and those poorly translated plays we read in English class.


We're trying to figure out why we're even trying another wine-soaked recipe after the last one tasted... like wine. Furthermore, this is right after one of our friends, well into his 20s, had his first glass of the stuff. His assessment: "It tastes like rotten grapes!" We at A Book of Cookrye can't dispute this. So why, since we don't really like wine anyway, are we doing this?


On the bright side, this recipe has far less than a pint of wine. Also, we're not heating it up into a foul-smelling hot fish-wine concoction as we did the last time. Instead... we're adding these.

All right, let's back up and explain just what's in this picture. On the left, the stuff that looks like an unnerving pee sample is fish sauce. On the right, the little shaker with barely any English on it is asafoetida powder. And now, let's catch up those of you who don't know anything about the food of ancient Rome and didn't read the introduction of the cookbook we pulled this recipe from.
Fish sauce was used in place of salt in a lot of Roman recipes. It was, more or less, the same as the fish sauce used in Asian food today. It smells absolutely foul when you open the bottle because it is made of fermented fish. The chapter on "Unfamiliar Ingredients" promises us that it cooks down to a really nice, mellow flavor even though it smells terrible and tastes like salted roadkill when you open the bottle.
Asafoetida was used a lot as a spice in ancient Roman foods. If you say asafoetida out loud, you'll notice the word "fetid" is in the middle of it. This is not a coincidence. The smell more or less attacks you when you open the little shaker. For the record, we got this at an Indian supermarket. It is sold as a powder called hing ( for those who wish to procure it, the word rhymes with the first syllable of "ingress"). The store stocks it with the medicines, which is why we could not find it when we were patrolling the spices. Someone eventually came asking if we needed help after we'd been pacing back and forth on one aisle glaring at all the illegibly labeled shakers for about fifteen minutes. When we said we were looking for asafoetida for adding to a chicken recipe, he looked at us as if we had just asked if sufficiently large bulk purchases came with our choice of his children who have reached age of consent. Nevertheless, with great reluctance he led us to the medicine section and handed us the shaker seen above. We will warn those who wish to experiment with spices now sold in Indian medicine stores that this is not the time to shake them promiscuously all over your culinary perpetrations.

As a last recipe note, the original recipe calls for some spice called lovage which no one sells around here. Purely for the heck of it (not that we can afford their prices anyway), we went to the hoity-toity gourmet grocery and asked if they sold it. We got this response:

The chapter on Unfamiliar Ingredients says we can use celery leaves as a substitute for lovage. That may work in the UK (where the book was published), but here in glorious America they cut the leaves off of the celery prior to selling it. We would have had to buy three very large bunches of celery to get enough leaves to make up a spoonful. What does anyone do with that much celery? So we did like a lot of people do in the store: pinched one of the very few available leaves off of the celery, tasted it, and that is how we came up with our approximation of cilantro and a pinch of celery seed. 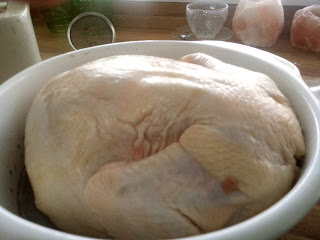 We at A Book of Cookrye have to tell you, this made the kitchen smell foul. The combination of fish sauce, asafoetida, and the surprisingly prevalent wine fumes added up to a foul mess that expanded into a rotting presence in the kitchen. It wasn't strong, but it was there. It expanded and took over the entire room. We worried it would go up the vent and travel through all the ducts.
Now, the original recipe quoted in the book makes it look like they're using a whole chicken. The modernized instructions use cut-up chicken pieces. We at A Book of Cookrye decided to go with a whole chicken for 2 reasons: it's so much easier to cut it up after it's cooked than before, and a roast whole chicken just looks so much more impressive on a platter even though all you do to cook it is shove it in the oven and leave it there.

We were having flashbacks to the fish-wine pie as the oven began producing smells. The entire kitchen smelled like hot wine. Well, I say the whole kitchen smelled like hot wine and here I must admit I lied- I'd spilled some fish sauce on the counter and the stink it radiated had fouled up half the room. When part of the kitchen smells like rotten fish and the rest like hot wine, one loses faith in the recipe. We kept desperately opening the oven, hoping that it was starting to smell like chicken in there and it just hadn't spread to the rest of the kitchen yet.
Things got even worse as it baked. The asafoetida made itself known. Have you ever had anything good come of a recipe that made your kitchen smell like rotten fish, rotten grapes, and feet? At some point you start to think it's a good thing these recipes are now in the back of the library and not lurking in people's kitchens. 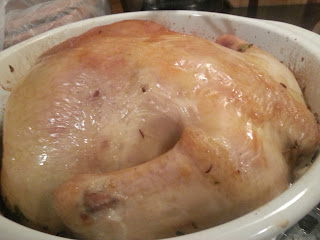 You know, it's funny. When one says they're making "chicken baked in spiced wine," it sounds so lovely. Spiced wine- that's some dainty thing with a cinnamon stick in the glass that gets handed around on BBC Christmas specials. You don't think it'll involve rotten fish and things from the back end of the Indian medicine counter. The stink this produced made us wish that, as in the days when this recipe was first published, the kitchen was a separate building. However, in the last 30 or so minutes, all the foul smells in the kitchen changed to the aroma of some damn good chicken.

You know what? This is pretty good. Like, really good. As in, not only did we save the leftovers, but we just put them on a plate instead of trying to hide the taste in a cheese casserole (not that you could with this recipe, anyway). It definitely tastes different than any other roast chicken we've ever made, but was so good we'd do it again. Besides, it's really easy.

All right, here's our Historical Food Fortnightly homework!
The Recipe: Parthian Chicken
The Date/Year and Region: AD 300ish, Rome
How Did You Make It: See above! Or, in short, dumped the wine, fish sauce, and spices into a casserole, stirred it real quick, inserted the chicken, and baked.
Time to Complete: About 15 minutes plus baking time.
Total Cost: The chicken was already in the back of the freezer with the price tag worn off, and most of the spices were already buried in the cabinets. The cilantro was $1 for three bunches, the caraway was $1.25, and the fish sauce was 67¢ for the mini bottle.
How Successful Was It? A lot better than the smells in the kitchen led us to believe. We're keeping the recipe. It's nothing like anything we'd make today, but really fricken good. Using a casserole barely big enough to jam the chicken definitely made it better since more of the spiced wine soaked into it.
How Accurate Is It? Not bad for someone trying 1700-year-old recipes without a museum budget. We had no lovage, and since there aren't many spices in the recipe it probably made a noticeable difference. The original text quoted over the modern recipe is for a chicken baked whole rather than in pieces, so that's what we went with. However, we have no idea what a "Cuman dish" is supposed to be, so we have no idea if inserting the chicken into a casserole is the same as arranging it in a Cuman dish as directed in the original.
Posted by S. S. at 9:01 AM