We at A Book of Cookrye have just undergone a massive life change! Behold!

That's right, we are now unemployed! (As nice as the student job we had was, they require you to be a student to remain in their employ.) I tell you, my future's so bright, I gotta wear night vision goggles. However, we did sign up for an online gift swap, and so some lucky recipient is going to get these.


We've had this recipe a while, actually. We even submitted it to the city newspaper's Christmas cookie contest and even made it to semifinals. However, we didn't make it any farther. This may be because we always have dicey luck with the recipe even though we started measuring out everything. Perhaps when the judges attempted to make their own batch, they had the same iffy luck we always seem to have with this recipe.

Also, pouring molasses out of a bottle makes one understand the expression "as slow as molasses." Now, we often skip adding spices to these cookies because we fricken love the taste of molasses. We pour it straight from the bottle onto pancakes and waffles. However, for the sake of other people who may not share our tastes (we do intend to give these cookies away after all), we added what one usually would expect in a shaker of pumpkin spice. You know, cinnamon, ginger, cloves, and such. As a recipe note, the molasses is really strong in this recipe, so prepare to very generously add spices before you can taste the difference.

As aforementioned, this recipe seems to give us varying results. Therefore we did not worry when, upon adding the baking soda, the dough suddenly got very curdled. It seems to always do that. 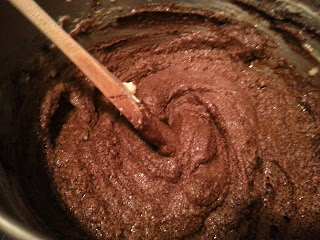 We didn't even worry when the dough was too sticky to roll out in our hands. 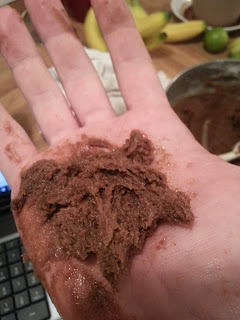 We've had worse problems and the cookies still came out fine. However, we did have to switch from rolling the dough into balls to sorta plopping it into sugar and shaping it once coated. In retrospect, we could have refrigerated the dough instead. 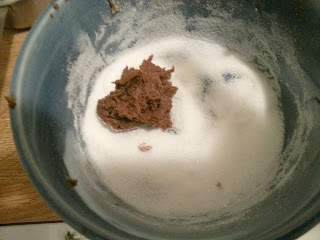 It occurred to us as we put these in the oven: should we really have decided on sending the randomly-assigned recipient in this gift swap molasses-spice cookies? Why didn't we go with a more stable recipe for the gift swap- one that comes out the same every time we make it? Or, you know, something more universally liked than molasses? We could have sent in a batch of peanut butter cookies. Everyone likes peanut butter cookies. Or chocolate chip cookies. 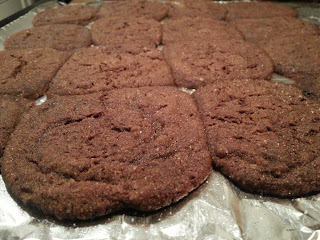 The molasses cookies came out flat. The previous time we made them, they came out shaped like poufs. This batch looked deflated. However, we had a minor consolation when the cookies turned out to be so well-joined that we literally lifted a sheet of cookies off of a cookie sheet. 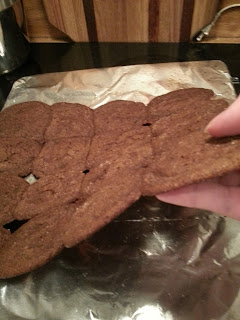 We took the liberty of eating one to make sure these were in fact not so terrible we could not send them. And indeed, they tasted really, really good. You know those Archway cookies? These taste like a not prefabricated version of those. There was just one problem... they were so, so flat. 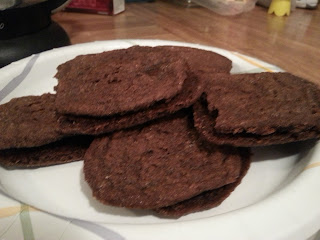 However, we at A Book of Cookrye had a two-ingredient solution to the sad flatness. As a bonus, the more expensive of the two ingredients we were about to use was 50% off. 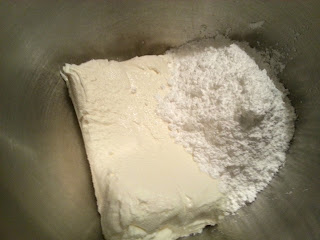 We at A Book of Cookrye would like to salute cream cheese icing. There is not a dessert in the world that isn't better with cream cheese icing on top. Cream cheese icing is the magical savior of the most foul-tasting confectionery disasters. Since these cookies already tasted really good, they were now about to be fricken amazing.

Incidentally, for such a simple operation, making sandwich cookies is surprisingly hard. I mean, too little and people get disappointed at such a puny ration of filling. Too much and it just squirts out the sides when you bite into it. Hopefully we got this one right.

And so, we at A Book of Cookrye packed these up the way countless people have taken home barbecue leftovers since the dawn of disposable plates.

We hope whoever got these cookies liked them. As for us, we're contemplating our future now that we don't have class in the morning. Heck, we don't even live in a dorm anymore. We're seriously going to miss things like this:

And it's blowing our minds to realize we will not be banging out projects last-minute with a setup like this:

However, we really are all graduated and shit. What the heck does one do when graduated? Maybe we can realize our dream of travelling around the world, meeting random people, and cooking local dishes with them in their kitchens. Or something like that.
Posted by S. S. at 3:11 AM