We at A Book of Cookrye are no strangers to making things happen when we don't have what we need. We have baked cakes in saucepans and put cake pans on top of the stove. We have made cake recipes involving four mixing bowls when we had none (we used a saucepan, glass, borrowed soup bowl, and cake pan which we later baked it in). Heck, for the longest time we had only a pocket knife for all our cutting needs. (Have you ever tried to chop an entire lasagna's worth of vegetables with a pocket knife?) Which is why we are surprised we never attempted to pull a cake out of a rice cooker.


This recipe comes to us from a book Our Mom of Cookrye has had the book ever since we lived in Taiwan. Yep, when we were but a wee tot, our father's company transferred him from America to Taiwan for so long that both parents decided to just haul the whole family across the planet. 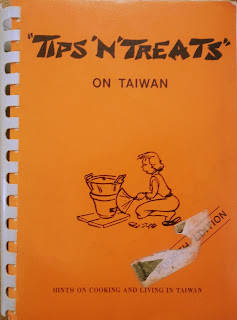 It has a lot of interesting recipes. Our favorites to look at now are the American recipes adapted to the locally available ingredients- like the corn casserole made with water chestnuts. The book begins with an unusually long chapter of household hints (usually in books like these, the housekeeping hints run for only a page or two). Among other tips, there's a list of things we never realized we could do with a rice cooker. 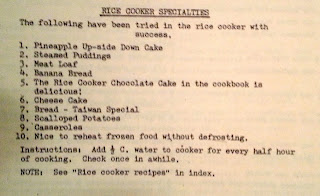 We would like to direct your attention to no. 5. This is the only point in 20 pages of household advice that expressly recommends a recipe elsewhere in the book-- and they put an exclamation point on it. On this recommendation (and because a chicken already occupied the oven and no one wants a chicken-flavored cake),  we figured this is as good a time as any to see if rice cookers are as versatile as all our friends from India purport them to be.
Incidentally, I think the only reason we have a rice cooker is because when our sister-in-law moved here from the Philippines, she was utterly confused that we didn't have one and promptly remedied our dreadful deficiency. However, since it's a tiny rice cooker, we had to cut the recipe in half. The cooker came with a strainer basket rather than a pan (easy enough to line with foil so it holds cake batter), which is so small it barely holds a pair of scissors. 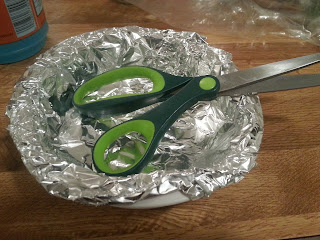 At any rate, this cake batter went together very quickly. First we dumped together the dry ingredients... 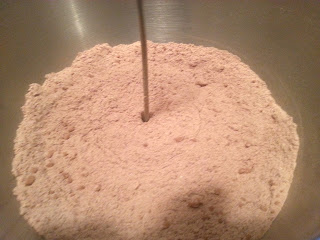 Then we did a slight detour to make buttermilk. Incidentally, we at A Book of Cookrye would like to advance a new buttermilk substitute. A lot of people do that bit where you mix milk and vinegar and leave it to sit for a few minutes, which works very nicely. But did you know that you can also just mix sour cream and water until it's kinda thick but still watery? It's quick, easy, and then you have the rest of the sour cream ready for taco night. 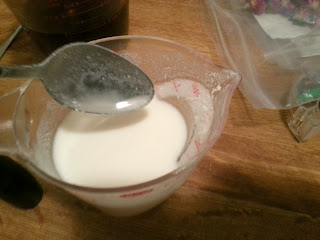 Once the buttermilk was prepared, we could move on to step two of the recipe: dump all the wet ingredients in. As a recipe note, since we halved the recipe, we used one egg white rather than the one whole egg called for in the original. We briefly considered beating the egg uniform, measuring it, then putting half of that into the batter. Then we realized that was utterly daffy. 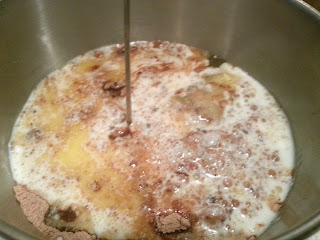 You know, we've seen a lot of lousy cake recipes in our time. Especially those ones that you theoretically can pour the batter into a mug and microwave it. They come out so bland. But this was actually pretty fricken delicious cake batter. And look how amazing and thick it came out! 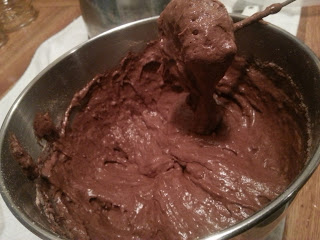 Right, let's get this thing into the alleged cake pan!

You know, it's surprising in retrospect that we never attempted to put a cake in a rice cooker before. I mean, it seemed that half our friends had one we could have borrowed when the oven was already taken. There were also always two or three lurking under the counter in the kitchen with names written on them. This is closer to normal baking than putting cake batter in a waffle iron (which is so fricken delicious- you owe it to yourself).
However, this cake rose right up to the top of the cooker. We wondered if it might push the lid off. 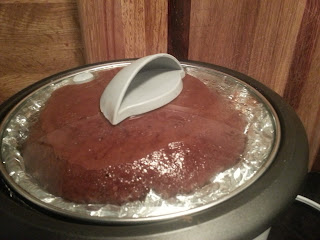 We stared at the hot, half-cooked cake batter gluing itself to the lid of the rice cooker and asked ourselves a very important question.

While the cake glued itself to the lid, the rice cooker boiled itself dry. When we opened the lid to take out the cake, we saw... this. 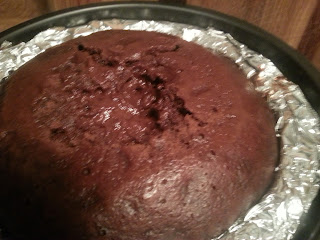 We at A Book of Cookrye are not opposed to the chocolate molten lava cake. We are not opposed to eating cake batter right out of the bowl without even getting it near an oven (or rice cooker). But this recipe promised us not a lava cake but an actual, fully cooked cake. We decided to put more water in the rice cooker and see if it would actually finish cooking. This is not as easy as it sounds. We had to first remove the cake. The cake was burning hot. The rice cooker pot was burning hot. The two fit together so tightly we couldn't even jam a dinner fork in there to prise the thing out. Eventually, we somehow managed to successfully remove the alleged cake so we could put more water under it and hopefully, this time, it would actually be baked all the way through.

What this cake lacks in size, it makes up for in ugliness. We decided to put it upside-down to hide its shame. That didn't help.
You know what this reminds us of? There's this one scene in a Christmas special where some meddling busybody is visiting her neighbor and sees her pathetic Christmas tree. She says "Oh, I know what you need to do! You just need to turn the bad side to the wall!"
The lady then wearily looks at her and replies "We did." 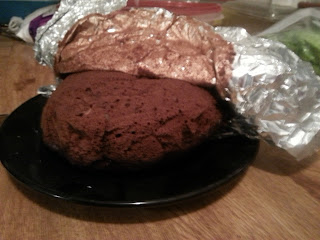 We hoped some cinnamon icing on top would somehow fix this cake's aesthetic problems. If nothing else, the cake was pretty porous, so the icing would in theory soak in and imbue it with cinnamon flavor. It made the cake look... marginally better.

But you know what? This cake may look like a child's first attempt at Play-Doh, but once we cut it, the inside didn't look half bad. Actually, it looks pretty good. 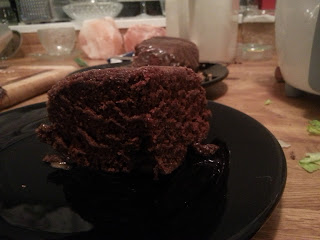 Once we tasted this cake, we forgave it everything. We forgave it for being half-cooked the first time the rice cooker boiled dry. We forgave it for looking like a malformed lump of good intentions. Who knew rice cookers actually worked for baking dessert? It didn't even come out soggy on top. This cake is divoon.
Posted by S. S. at 7:09 AM