Sachertorte: or, Happy birthday to our great-grandfather!

We at A Book of Cookrye would like to salute our great-grandfather on today, his 27th birthday! You may be wondering "How can someone be a great-grandfather before he's old enough to chase people off his lawn?" However, we I didn't say he would be 27, we said it's his 27th birthday. You may notice that today February 29. The man was a legendarily angry person- perhaps the tightly rationed birthdays informed his bitter trudge through life.
Anyway, we wanted to honor his first birthday in four years. So, we're doing this! 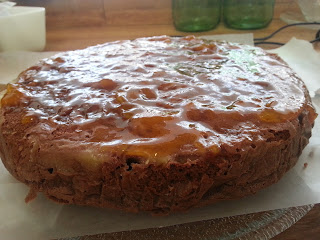 But this is not just any chocolate cake. This is a cake that apparently sacred to Austria in general and Vienna (where he's from) in particular. Every cookbook we've ever seen that has a recipe for it doesn't just give the instructions. Nope, this cake gets its own mini-chapter with the history of it (there is a multi-year lawsuit involved) and lengthy explanation of how this is totally not just a cake. Only then are you allowed to read the directions and make it yourself. 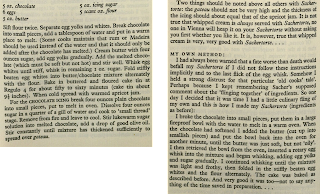 That's right, in honor of the fact that he immigrated from Austria, we're making a sachertorte! His daddy lived in Vienna where the sachertorte was invented. It's one of the most famous recipes to come from Austria. The Austria tourism board's website claims sachertorte "must be the most famous chocolate cake in the world today." However, sachertorte doesn't seem to be too terribly well-known here in the well-cultured. For one thing, the name shows up with a red squiggly underline every time we type it. For another, whenever we were asked what were making, they looked at us confused, asking "what's a soccer tort?" until we said it was chocolate cake.


Sachertorte is one of the many things we've been meaning to make for some time. We actually have two recipes for it: one in our Bible (an all-chocolate recipe book) and this one which we scanned before returning the book to the library. We went with this recipe for two reasons: it's from a book of Austrian recipes written by an Austrian lady, and she put shortcut instructions right under the official ones.

We actually respect Gretel Beer a lot for putting the shortcut instructions under what we assume are the steps for the canonical method. For one thing, it's a sign she made the recipe herself enough times to find and cut a lot of superfluous middle steps that were in the way of eating cake. It's a sign she wanted more people using her book to actually make the recipe rather than reading through it. We imagine she finished typing out the socially acceptable way to make a sachertorte, reread it and realized how many cooks would be thrown off by all the excessive steps and rewrote it for the rest of us who don't like having to manage multiple bowls of different mixtures and other complicated things. However, we had four bowls out before we were five minutes in. As a reminder, the A Book of Cookrye Kitchen doesn't have a dishwasher.


On the bright side, this recipe wasted exactly zero eggs. For some reason, it bothers us more and more these days to waste either a bunch of egg yolks or a bunch of egg whites. We were pleased at how resourceful we were allowed to be and tried to ignore the fact that the chocolate had somehow failed to melt. In theory, the electric mixer would break it down and disperse it... right?

I don't know weirded us out more: that the chocolate looked like it'd burn in the microwave before it melted, or that it immediately liquefied when we inserted an electric mixer and tried to beat in the butter.

This recipe is backwards of every other one we've made. Usually the powdered sugar goes in the icing and the granulated in the cake. This threw us off a little, but not so much we couldn't go ahead and sic an electric mixer on the yolks. 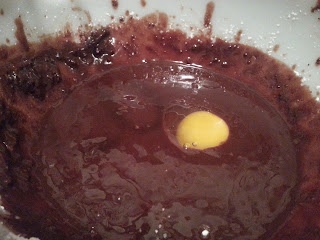 Now, we must admit that we never quite got this whole folding in egg whites without deflating business quite right. This recipe has us adding the egg whites alternately with the flour, meaning not only do we have to successfully not deflate the cake once like every other recipe we've ever done with beaten egg whites, but we must successfully do so multiple times!

But you know what? We ended up with some of the most delicious chocolate cake batter we've ever made. Seriously, I'd have been bitter for years too after leaving a country that makes cakes like this. It was so divinely chocolatey and amazing, it took a great amount of restraint to get it into the pan and bake it. We tend to do a deliberately poor job of scraping the bowl, but this time we really didn't put much effort into it. 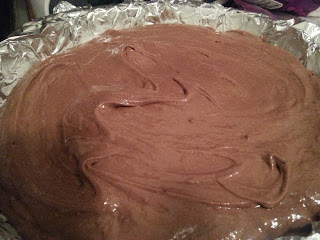 However, the cake came out looking unnervingly desiccated. It looked like we might be heading straight into mediocrity with this one. Behold how sad and dry it looks! 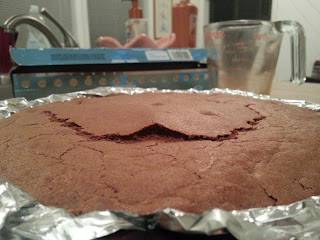 We actually let this thing cool overnight because we were going to do this properly. We were going to make the icing with the candy thermometer, get some apricot preserves, and even buy fresh cream to put on top. After all, our great-grandfather's birthday only comes once every four years. Now, we at A Book of Cookrye have previously called various other cakes sturdy, but we've never had one that we could hold up like this.


All right, bring on the apricot preserves!

Another recipe we saw said to strain the preserves before putting them on the cake. We just picked the apricot pieces off and spared ourselves from having to watch a syrupy strainer.

Now, the recipe says to cook the sugar and water until it's at something called small thread stage. We've never heard of such a thing, but fortunately the term comes up in a lot of cookbooks old enough to be public domain.

We didn't expect to make a lot of icing for such a small cake (the pictures that turn up in an image search for sachertorte show a really thin layer of what looks like chocolate glaze), but this still looks... underwhelming. 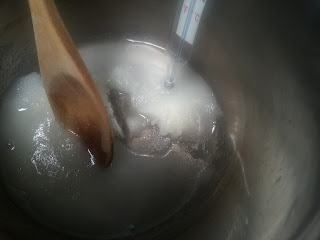 You may notice it's so shallow the thermometer bulb barely makes it in there. This teeny allotment of syrup heated so fast that it went about 40 degrees past the 215° mark while we were wiping the countertop. We asked ourselves if we could use it anyway. Then we remembered this is in honor of ancestors and chucked it, also the icing would probably harden and get stuck in everyone's teeth. Since Our Mom of Cookrye has an electric kettle, it was no trouble to rinse the pot in boiling water and start over. 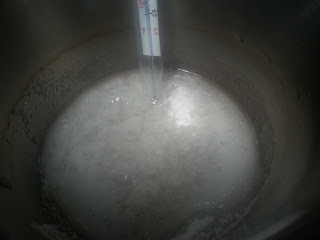 The second time we did this, we hit 215° exactly and yanked the pot off just in time. We were all set to... well, shit.

Yep, it's still really gritty. Even if it would make the icing a nice metaphor for his temper, we don't want our great-grandfather's 27th birthday cake sanding off people's teeth, do we? At this point, we got a really big batch of boiling water going because it was clear we would be failing at small-thread syrup many times before we got it right and therefore would need to wash out the pot a lot in the next half hour or so.
For attempt three, we put the stove on a very slow simmer, beat the syrup-to-be with a spoon like it had failed us twice, and only when the syrup clear did we turn up the heat and boil it. And behold, we succeeded! 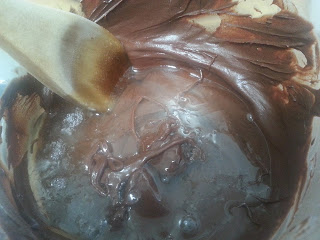 That syrup is so clear and sugar-grit-free it looks like we just dumped water on the melted chocolate! Right, we have chocolate that melted without turning into brown clay like when we made the cake and syrup that spun a perfect small thread. Let's stir them together so we can crown the cake with... 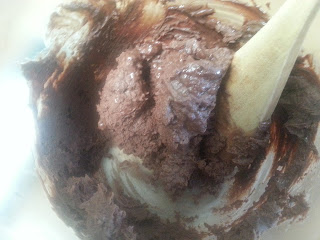 SERIOUSLY? One second we're stirring together melted chocolate and runny syrup, and the next we have this? We figured maybe we let the syrup cool too long and microwaved the whole mess, hoping it'd go runny again. We had that shit boiling in its microwave-safe bowl before dumping it on the cake. Maybe if we frantically had at it before it had a chance to cool off, we could spread it over the whole cake. We got this. 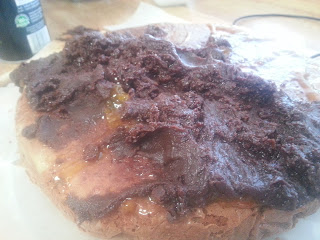 At this point, we wished we'd kept up with our online German lessons so we could angrily shout how we felt about this properly. As we've been told, our great-grandfather was a terrible cook. Maybe he had this happen when he tried to make things from home and got burnt out of cooking. Well, we had at the cake with paper towels and tried to get over the bitter feeling from wasting that much chocolate.

The icing didn't even harden into a plausible batch of fudge. It just turned into sad, dried-out bitter chocolate rocks. We had to come up with a replacement icing after re-spreading a layer of apricot on it. By the way, we got the good preserves for this thing. Writing off the jelly that had previously occupied the top of the cake as collateral damage was not helping us get over having spent all this time making multiple attempts at syrup and also wasting some perfectly innocent chocolate.
However, a tiny handful of chocolate chips remained in the bag. We had planned to put them around the rim of the cake to give it that perfect finishing touch. Instead, we melted them along with some blocks of semisweet chocolate left over from some Christmas recipe. This we just put directly on top of the cake because we were not going to lose the last chocolate in the house trying that icing recipe again. 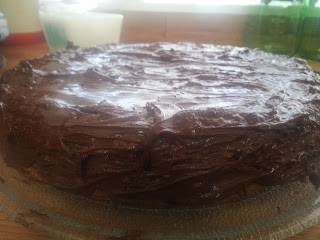 We had thought we'd have a beautiful cake, crowned in a beautiful smooth chocolate glaze like the pictures we've seen of it. There'd be an adorable rim of chocolate chips to make it a little better than perfect. It'd be so dainty and European. We imagined how this might make someone yearn for the old country where you could get cakes just like it at any random bakery. But that didn't happen. Instead, the best you can say for this thing is... 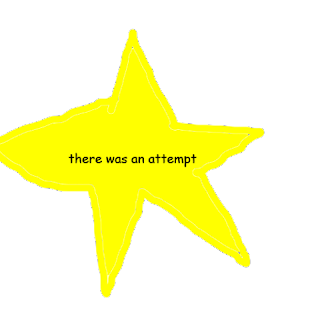 It looked worse when it cooled down. As the chocolate hardened and lost its shine, it was evident that we had not so much spread it on top of the jelly as we had smeared the two of them around. 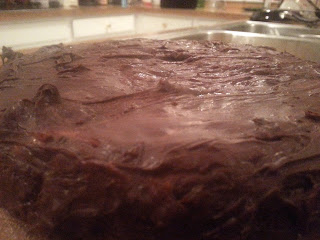 But you know what? No chocolate cake ever tasted bad because of an ugly icing job. So, we went to visit friends and raise a cake slice to ancestry. 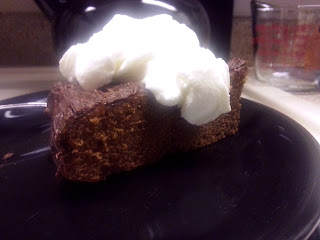 As will surely surprise no one who saw the picture of us hefting the cake single-handed without the cake breaking, this cake was not exactly soft. In fact, a friend who had a piece asked "Is this cake? It's like eating a sponge!" A later sentence deployed was "I feel like I'm eating a chocolate Sponge Bob!"
And indeed, this was a lot denser and a bit drier than the chocolate cake we'd have here in America. However, it was so good that three fourths of it were gone in two hours.
So, happy birthday to our great-grandfather! Sorry you only got one every four years!
Posted by S. S. at 11:59 PM