Sweet Cream Cake: or, What else were we supposed to do with a carton of cream?

We at A Book of Cookrye do not like throwing things away or letting them expire unused. This makes things difficult for us when, for whatever reason, we feel we must make a recipe properly, omitting nothing. This was particularly problematic when we purchased the things to make our sachertorte- cream was sold out when we were buying the things for the cake. We returned the next morning (the dairy shipment having arrived after closing) and found that all the smaller cream containers had already been snatched right off the shelves- leaving us to take an unnecessarily large carton of the stuff home. It seems the gluten-free, carb-free, and paleo people have seized on cream as good for... uh.... something.
At any rate, we did not want to waste the remainder, but had no idea how to repurpose the remainder. We never buy cream, so we had no idea what to do with this carton threatening to expire at any minute. We then found this.

At first we thought it was just a regular with cake recipe with cream instead of milk, but as you can see, there is no butter. We wondered if the recipe would actually work despite this unnervingly prominent omission or if it would fail. And even if it worked, would it taste weird? Would it pass for cake or be one of those miserable substitutes that dieters miserably chew on while muttering "Eh... it'll do"?

We had no idea how this was supposed to work. But then again, the eggless cake recipe did in fact produce a cake. Besides, the cream had been sitting in the refrigerator for a few days by now. As anyone who buys the stuff knows, cream is like strawberries. It expires as soon as you expose it to your kitchen. We at A Book of Cookrye do not believe in letting something go to waste and throwing it out when we can throw a lot of effort and ingredients at it, find that the results terrible, and then throw the whole mess into the trash can. 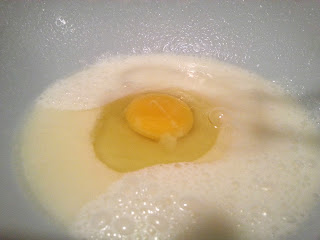 Unlike a lot of our attempts to incorporate nearly-rotten things into salvage recipes, this was ridiculously quick to make. We made it faster by not bothering with all that sifting business. 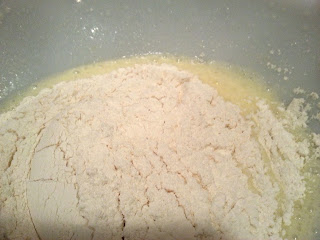 To fully test whether this would actually produce a viable cake that didn't taste fundamentally wrong, we omitted the vanilla to better detect any unnerving flavor it was meant to conceal. The batter actually tasted really good, though we wondered if we should shake it for an hour to see if the cream churned to butter and made this cake normal. 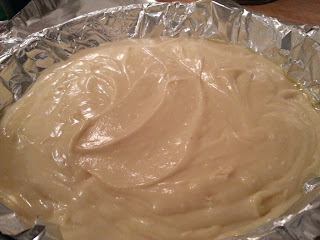 When we removed this from the oven, we had two good reasons to suspect that we'd soon discreetly throw it away: it had gotten freckles for some reason, and it was unnervingly springy. When we pressed our finger into the center to see if it was done, our finger literally bounced off it. 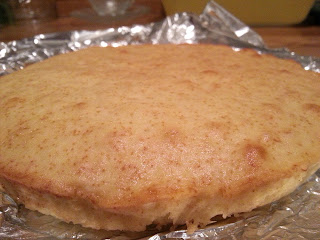 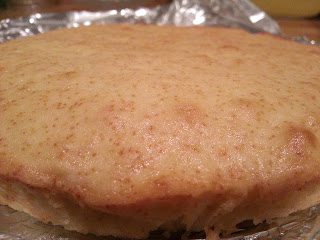 But you know what? It's actually pretty good! Either the cream rendered to butter as it baked or you don't need it that much anyway. We would actually make it again. It had no odd taste at all. We'd anticipated it being like biting into foam, but it was somehow really light and also really firm in a weird way that worked. Seriously, try it. And (to the surprise of no one) it'd be really good with whipped cream on top. 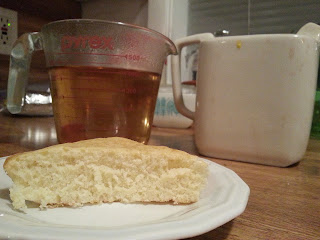