We at A Book of Cookrye have been pondering eggless cakes ever since the tragic waste of a perfectly good Diet Coke. We have one eggless cake recipe that is seriously delicious, and now we're going to try out a second.

This comes to us from a cookbook written by an emancipated slave. After the introduction, he has a brief autobiography which he begins by describing the conditions in which he grew up. If anyone had justification for putting that at the beginning of their book, it's someone who spent beginning of his life in slavery. And you get the idea that he's understating a lot as you read it.


On that cheerful note, on to the eggless cake!
We've seen a lot of eggless cake recipes, and most of them have very odd instructions because when you leave the eggs out of a cake, it will not want to turn out right on its own. This one has no instructions whatsoever, so we assumed there's nothing weird you're supposed to do. 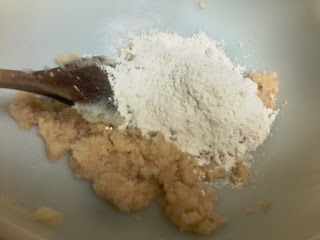 In the book, he says that these recipes are the result of extensive testing over the course of his career, which we're willing to believe since he worked as a chef for most of his adult life. He was hired to cook for everyone from railroad companies to royalty. Therefore, the fact that we're apparently just taking what looks like a normal cake recipe and removing the eggs may seem daffy, but presumably it works.

All right, we may have said the recipe had no unusual instructions to make up for removing the eggs, but that's not completely true. We did have to chop the raisins. Who chops raisins, like, ever? We're therefore going to say the chopped raisins are the egg substitute here.

Well, if nothing else, it looked like a cake batter. It did not look suspiciously runny, unnervingly curdled, or otherwise wrong. More promisingly, it tasted really good. 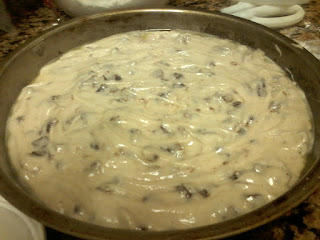 Furthermore, it actually turned into a cake! Seriously, look at this! 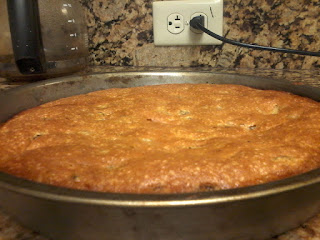 However, just because it looks like a cake doesn't mean it is one. So, we sliced it and...

It's a cake! Seriously, it turned into a nice, surprisingly tart cake! You can tell the spices are there, but it's not a spice cake. It tastes very old-fashioned. Or at least, like our idea of old-fashioned. It's a very dense cake, but it's so divoon.
Those who are looking for vegan desserts can use margarine or vegetable shortening and serve something really good-- instead of the disappointing things people usually expect in vegan desserts. Anyone who ran out of eggs but still wants to make a cake can make this one. It's really good.
Posted by S. S. at 3:34 PM