A new year is starting for us at A Book of Cookrye! We have moved into our domicile for the impending school year and are as ready as we'll ever be. Since this year will be full of coding and math classes, we decided we wanted to have something good for us at the beginning of the year. And it's pink!


We had leftover maraschino cherries from Our First Lady's Salad, extra lemons from Mary's Snow Pudding, and we wanted cake!

We read in a Maida Heatter (author of The Holy Bible) recipe that if you rub citrus rinds and sugar between your fingers, it releases the oils and gives a much stronger flavor to the cake than if you just drop the rind in. It appears she was right; this smelled so nice and lemony, and tasted divoon when we tried a pinch. Don't you just love when you find recipe tips that not only work, but also are really easy, make your food come out a lot better, and don't involve buying expensive, specialized kitchen tools?

As a new year dawns, we at A Book of Cookrye wonder what it holds for us. Well, aside from the math class. We're not looking forward to that at all. But will we get to do anything as fun as showing drag queens to engineering students again? 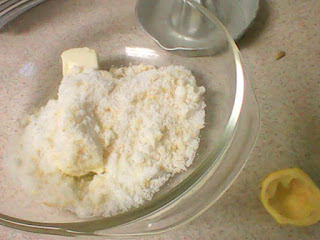 All right, it's time to add the lemon juice and that syrupy stuff the cherries were floating in. My inner nine-year-old who loves dumping lots of food coloring into cakes was unbecomingly ecstatic at this. 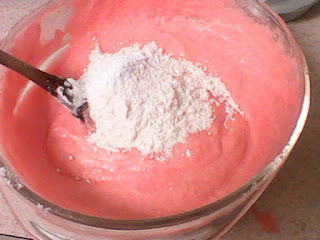 The batter tasted like pink lemonade- only not artificial and weird. The cherry flavor was surprisingly subtle- you could tell there was something in there besides lemon, but it wasn't quite so obvious what. Given what shade of pink the batter ended up, you could easily have thought it was strawberry and not cherry.

We thought about putting some cinnamon icing on top, but decided that this already had cherry and lemon in it. Adding cinnamon on top seemed like it would be too many different flavors all at once. We soon after decided icing was too much unnecessary bother. However, the top did turn out an odd color. It turns out bright pink doesn't look good after getting browned. 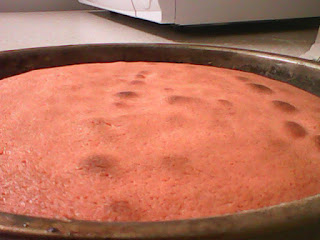 However, it was as bright as ever once cut. Look at it! The browned top makes the inside look more festive and pink than ever.

We gave a lot of this cake away, and it went over a lot better than we thought it was. Two people gave us a hug and one a salute. The best part: giving away cake inspired one of our neighbors from India to share some leftovers.