The Return of War Cake: or, I swear I don't hate vegan desserts

We at A Book of Cookrye recently featured a dreadful attempt at veganism. The internet told us replacing eggs with Diet Coke in a cake recipe would work. We would feel deceived, but is it really deception when you figured this would end badly and just wanted to see what special brand of wrong would come out of the oven? Well, anyway, as an apology to vegans, we would like to bring out this recipe again. See, we do have vegan cake recipes we make voluntarily!

We at A Book of Cookrye are also making this with a special twist: instead of raisins, we're using these!

Yes indeed, the people who run one of the summer camps held on campus were giving away lunches. By "giving away," we mean they left the table unattended. We took two of them. While we appreciate the attempt to keep children healthy, we think anyone who thinks they can get away with giving them an apple, an orange, raisins, and some baby carrots (guess what that means!) better have some cookies on hand. Seriously, houses get egged on Halloween for this kind of treatment.

This recipe always mystified me. I have no idea how you can start with a water syrup and end up with a cake. Also, how the heck does it work when it's only got two tiny teaspoons of shortening?
I've often wondered who worked this out. However did someone come up with this idea? Was it some home economists coming up with ration-friendly recipes willing to try anything? Someone at home who really liked dessert and wasn't about to let wartime shortages bring that to an end? Was this recipe made from nothing or loosely based on one that had already existed?

At any rate, this somehow actually becomes a seemingly normal cake batter, and ends up being a completely normal cake! Also, if you don't ever eat cake batter because eggs, you should make up for what you missed with this one. Behold how divoon this looks- you almost want to just turn off the oven and get a spoon. Or at least, I do. 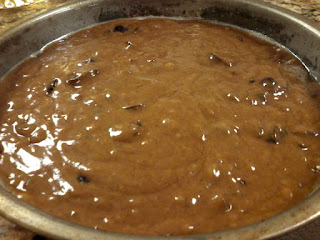 And as you can see, unlike most of the carrot cakes and that dreadful other vegan cake, this is in fact a proper cake. It is not cake paste. When I was making this, a friend who's had it before got excited and said "Oooh, is that that vegan cake?" in the same way you'd say "Ooh, that burger comes with extra bacon?" 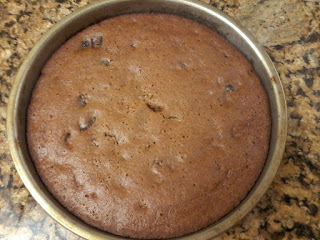 Anyway, this thing is lactose-free, vegan, low fat, and somehow it's still a cake. It's divoon.