Ever since we first had rhubarbs, we at A Book of Cookrye have been wondering... what does straight rhubarb taste like? We had rhubarbs with raisins, but what does this weird red celery stuff taste like on its own? We're turning to the Great Depression and finding out!


The recipe looks pretty straightforward, right? Give or take a couple of ingredient amounts, it's the same as the rhubarb-raisin pie only without the raisins.


I know we're supposed to mix in the egg yolks first, but is it supposed to look like this? 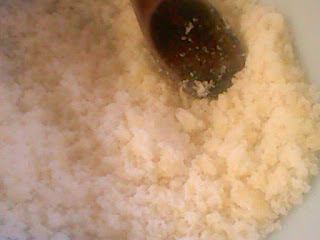 The lumps would not dissolve upon contact with rhubarbs. Maybe this is why they don't grow rhubarbs in the south- people got tired of having to flog their pies with a whisk.

At any rate, this recipe was pretty quick to throw together. We figured the business with boiling water was to soften the rhubarbs a bit before baking and skipped it since they were already kind of mushy.
For some reason, the sight of the pie filling right after we dumped it out of the bowl was more amusing than it should have been. And get a load of the color on this thing! Are rhubarbs really this color, or did they dye them in processing?

However, the pie never really set as such. After an hour or so of the pie not even looking like it could pretend it had firmed up, it occurred to us that it might set up better once it cools. Borrowing from our brief experience in jelly making, we started spooning out a little of it onto a plate which we had shoved into the freezer. It took a further thirty minutes for it to show evidence that it was any thicker than when it entered the oven. Maybe if I hadn't used frozen rhubarbs it wouldn't have taken so long. 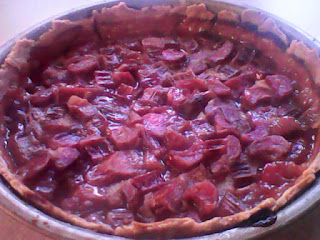 But eventually, we got to the meringue making! As we previously discovered, powdered sugar works really well for making meringues. They come out so creamy. They do seem less voluminous than meringues made with granulated sugar, so if you want a big meringue cloud, you may want to skip that (and also use more than two egg whites). For this particular pie, we decided a thinner meringue that was more of a baked-on frosting would be better than a massive puffy thing floating in its own sphere of existence and nearly completely separate from the pie itself. And look how happy the pie was to see us! 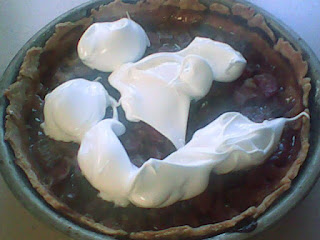 Incidentally, while meringues still divide a lot of people (in my family, some people scrape them off and leave the rest of the pie behind while others complain they're like sweetened Styrofoam), the oldest mention of them suggests you only bother putting a meringue on a pie if you can't get any cream to whip. We at A Book of Cookrye think it no coincidence that most meringue-topped recipes until very recently call for the same number of egg whites to go on top of the pie as they do yolks to go in the base. It's less waste. And in the case of this recipe, there's a Depression on, so the idea of throwing away half of your eggs is really stupid. 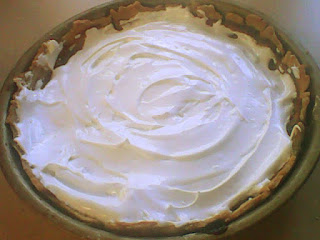 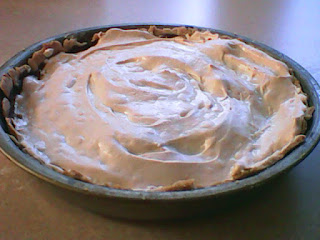 And behold the finished pie! The recipe may call it a custard pie, but it doesn't look much like one, does it? We'd thought it would look more like rhubarbs floating in pudding. Instead, it looks like rhubarbs held together in a mysterious force field possibly generated by the meringue on top. And it was so brightly colored we think rhubarbs might not technically be natural. 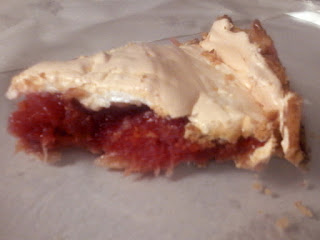 However, this pie was fricken delicious! I may start badgering my friends in the north to bring rhubarbs with them when they visit. I gave a lot of it away, and nearly everyone had to ask "What is a rhubarb?". Despite that, over half the pie was gone in an hour.
That said, the baking time is ridiculous. If we make this again, we will cook the filling in a double boiler instead of leaving it in the oven for that long.
Posted by S. S. at 1:32 PM