A lot of times I think it'd be fun to make a club of people who cook for fun. We'd get together every once a week or so, and everyone would make a recipe they've had sitting around for a while but never got around to making. You know, the ones you have stashed away somewhere because you've always wondered how they'd turn out. However, if we did start a club, someone might bring something like what we're about to perpetrate today.


Today's recipe comes to us from Freezair (who also sent us the gluten-free paleo "pancakes"), who writes:


I know your fondness for off-the-beaten-path recipes, and the origins of this one are as offbeat as it gets. This one actually comes from... a children's Playstation game. A thirteen-year-old video game designed for children under the age of five. Also, it's got Mickey Mouse on the cover. Yes, this originates from a video game called "My Disney Kitchen" in which you, you toddler with an interest in fine cookery, can pretend to cook in a kitchen whilst Mickey and Minnie Mouse watch your every move creepily and warn you not to put spoons in the microwave. From an adult perspective, the game is actually kind of hilarious--you can stuff an entire chicken in a blender, cover every available surface in grape jelly, and serve Mickey and Minnie breakfast consisting of nothing but butter and maple syrup--but it also includes, for some reason, an in-game recipe book of real recipes for "the kids" to try making at home with their parents. Except that while some of the recipes included are exactly the sort of things you'd expect to teach kids to do in the kitchen (like chocolate-covered bananas, a perennial favorite from my own childhood), some of the recipes were incredibly fiddly and complicated and involved a lot of ingredients and steps.

And then... there's this one. It's called "Peanut Butter Soup."

Messr. Mouse insists in the in-game voiceover that this is a variant of some kind of Mexican cuisine. The biggest link I can claim to Mexico is living in a place where the cacti have arms, but I still feel slightly skeptical of those claims. You would know better than I would. Either way, this looks kind of horrifying. I mean, if it weren't for the inclusion of peanut butter, this would seem like a fairly normal soup recipe, but then it comes along in the ingredient list, screaming "HI, I'M OVERLY SWEET AND SMOOTH FOR THIS KIND OF RECIPE AND I'M GOING TO FRIGHTEN YOU WHEN YOU TRY TO PUT ME IN!" Admittedly, I could see a soup like this working with SATAY sauce, but there's way more to that than just peanut butter. Anyway, here's your culinary terror for the day...

(Incidentally, there's another recipe in this collection that attempts to use peanut butter as a satay substitute, but that one, for sesame noodles, feels slightly less frightening, somehow...)


My first question: Why do Mickey and Minnie need some video-gaming toddler to wait on them? Given how much money Disney makes per second, can't they afford to hire decent help? Second, how much does Disney underpay their developers that this recipe ended up in the published version of this game? And why did they have to slander Mexico in the process?

Adding peanut butter to this didn't scare me nearly as much as step 6, where we turn the soup into baby food. But we'll get to that in a minute.


As we proceed through this recipe, you might want to keep in mind that it was aimed at children. I want to briefly pause and say that this is one of the first recipes I've had serious misgivings about making. I mean, this comes out of Disney property, and the A Book of Cookrye budget does not include thousands of dollars in lawyer's fees. However, in order to sue us, Disney would have to own up to foisting this recipe upon impressionable wee ones.

This recipe is such a tease. At first, your kitchen smells wonderfully of onions and garlic. At this point, some people started drifting kitchenward to see what was cooking. 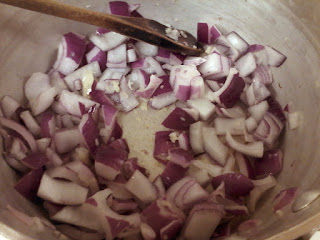 The teasing continues when you throw the rest of the soup together and it tastes like it will come out  like a really good minestrone. This is the first time I've seen sweet potatoes outside of a marshmallow-topped casserole on Thanksgiving, and they added a nice, subtle sweetness to the pot. 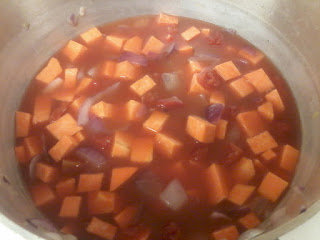 I had serious hopes this would come out decent. Heck, it wasn't just decent, it was a really good pot of vegetable soup. The only thing I'd have done differently is leave out the extra water.

All right, here's the moment when this recipe makes you wonder if your effort in the kitchen was all a waste. The peanut butter looks like a dead fish, which (appropriately enough) we often send down the toilet. 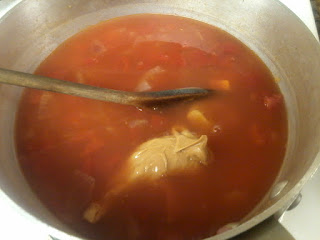 You know what? The soup may at this point look like a pot of Velveeta and Ro-Tel made by the sort of person who burns boiling water, but it didn't taste as bad as you'd think. Far from being terrible, the broth tasted somewhat like the peanut sauce I bought once from the Vietnamese store. It's not as good as it was before we dumped the peanut butter in, but it wasn't bad either. 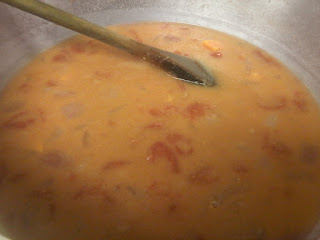 All right, the soup's somewhat edible, though not anything I'd repeat. However, one step remained which took the recipe from weird to WTF:

Do you believe in divine intervention? Because when I was in the middle of blenderizing this, Marcus called from Subway asking if I wanted the other half of a buy-one-get-one-free sandwich sale.

Now, at this point we're supposed to put peanuts and chicken on top. I am so glad the chicken didn't have to get blenderized. It's bad enough the rest of everything did. I'm also really glad that the gods decided to mercy-deliver something else for supper. You should be aware that the camera is doing this soup more favors than it deserves. It may look be the color of pumpkin stew in the picture, but the reality was somewhere between pumpkin and the paint they use at the DMV.

Now at this point Marcus arrived, just in time to try this. 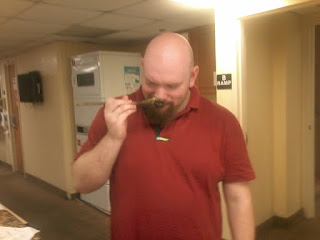 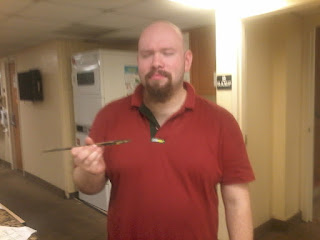 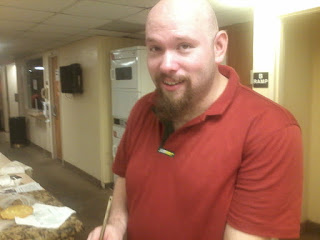 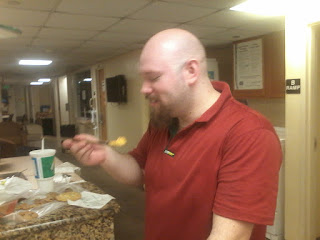 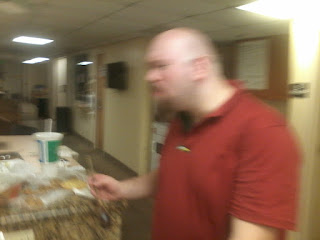 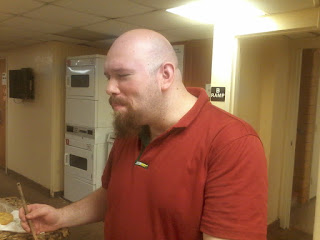 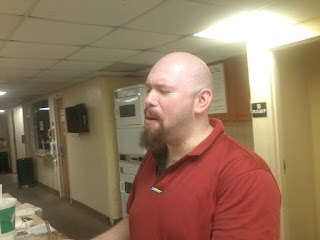 Remember, after every trauma comes contemplation. 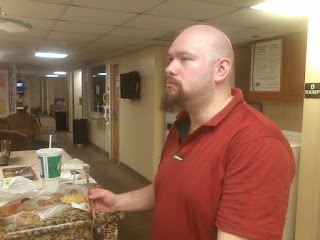 Every recipe we've gotten from someone else has hitherto had some bright side. Upside-Down Chicken Pie? Drown it in soup and it's not too bad if you're really hungry. Primordial gingerbread? Actually worked really well as the bottom crust for an apple crisp. Gluten free paleo banana pancakes? A French toast recipe waiting to happen. Rhubarb-raisin and strawberry glacé pies? Those were actually pretty amazing on their own. As for this soup? Well... it caught that stupid fly that had been circling us. 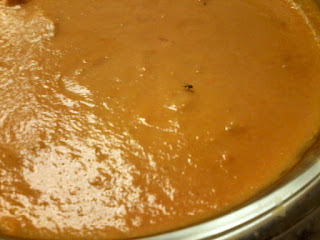 I know I cut the recipe in half, but I'd figured that no matter how bad it tasted, it would still work for lunches for the next couple of days. But I changed my mind.

Fortunately, this evening has a silver lining.