Today on A Book of Cookrye, we present an actual Italian recipe!


Spaghetti alla Carbonara (typical recipe of Rome)
for 4 person you have to use:
Half pound (mezzo chilo) of spaghetti (but it depends how much you are hungry…)
3 eggs
A quarter of pound (3 etti circa) of bacon in cubes
Extra virgin oil
Pecorino cheese (if you cannot find it you can use Parmesan cheese)
Salt and pepper

What you have to do:
Put a boil water with salt (one spoon)
Beat the eggs in a dish and put some salt and pepper together
Fry slightly bacon with some extra virgin oil
When spaghetti are ready drain them and bacon and oil on them quickly
Put and mix well the eggs quickly
Put some cheese and pepper

Don't you just love the phrasing? When I read it, I imagine someone in the kitchen with me saying this out loud as we make it together.
This comes to us from a friend who went to Italy and visited his relatives. We repeat, a friend's Italian cousin sent him home with this recipe! 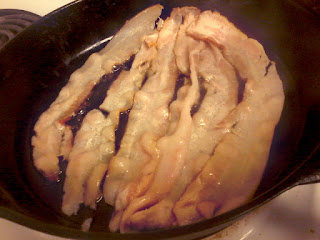 We will point out that that by bacon, they really meant something closer to ham (which it why you're supposed to add oil to the pan when you cook it). However, this was leftover in the refrigerator, so therefore cost nothing. And by the time it cooked, it shrivelled up from covering the entire skillet to nearly nothing. 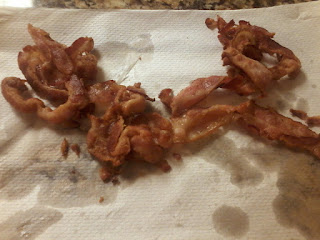 Ambiguous phrasing in the recipe caused a minor controversy among those present about how the eggs are cooked. There were two lines of thought:

1. I think you dump them raw and the heat in the noodles flash-cooks them
2. I just got over a stomach virus and don't want to eat raw eggs.

We ended up scrambling the eggs first.


All right, so we took an Italian recipe from actual Italians and veered way off what they had in mind when writing it out. Out of curiosity, we decided to see if pouring the raw eggs over the noodles right after draining would cook them. Turns out it does! However, you can't really stir anything into them afterward. Whatever you try to add will just sit at the bottom of the bowl while you try to make it mix into the spaghetti. 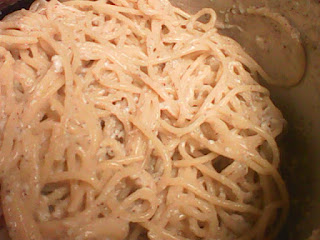 In conclusion, this is really hard to make bad. However, if you want to have something closer to what you'd get in Italy, use ham cubes. And so that they'll actually mix into the noodles instead of staying in the bottom of the bowl, add them separately. Then dump the eggs on the pasta- if you do it immediately after draining and toss very quickly, the eggs will get cooked as they coat everything.
And seriously, you won't be hungry for hours.
Posted by S. S. at 12:08 AM