Apple Airs could have been made a lot faster 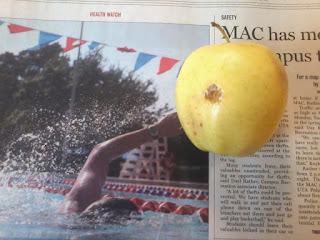 You know what this means, right? Yes indeed, we're putting these in recipes because we have nothing else to do with them. 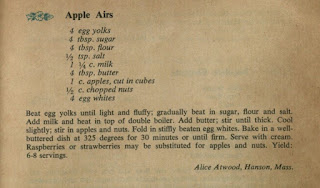 I'm going to have to do something about my produce-buying ways. There's something a bit ill-founded about passing up all the perfectly good fruit because it's full price, only to see the squishy things you can't eat as-is and purchase two bags. It's especially daft if you'd have just kept your money in your pocket if the only fruit they had was perfectly fit to just eat without making into a pie. 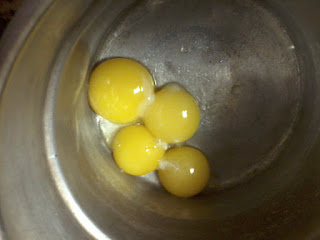 Apple Airs involves a lot of time working over what looks like that paste they use for texturing walls.

Also, that extended whipping time earlier in the recipe was utterly pointless. It deflated before it was done cooking. But that's all right, we made up for lost volume with a big hunk of butter.

Upon tasting, the spackle-like pudding-to-be was very bland. A shake of cinnamon made it better, but cinnamon is not magical and therefore we had a pot of bland with cinnamon in it. 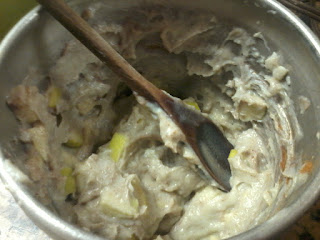 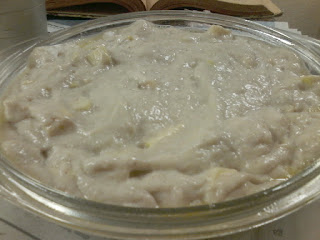 Astonishingly, this actually turned out kind of pretty. It looks oddly like a pot pie. Does anyone else looking at this think they would find chicken and potatoes in there when they cut it?

However, this looked exactly like bread pudding when cut. 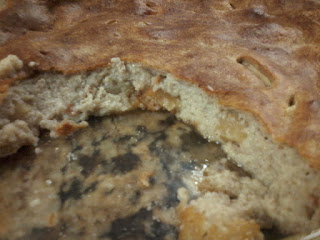 Not only look like bread pudding, it tasted exactly like it. It's not that we object to bread pudding, but making mush of stale bread would have been a lot faster than this business with a double boiler.
Other people liked this a lot more than I did. One person described it as "subtle." I was just annoyed that I could have gotten nearly the same thing in the time it takes for bread slices to get thoroughly soaked. If you like bread pudding and want it to be so homemade you don't even bake the bread first, this recipe is for you!
Posted by S. S. at 2:27 PM